Celebrating the 20-year anniversary of the most loved icon in Rotterdam.

Paris has her Eiffel tower, you can’t imagine London without the Big Ben and what would a postcard from San Francisco look like without the Golden Gate bridge? This is why you can no longer picture Rotterdam without one of the most outstanding architecture symbols of the city: The Erasmus Bridge (Erasmusbrug). 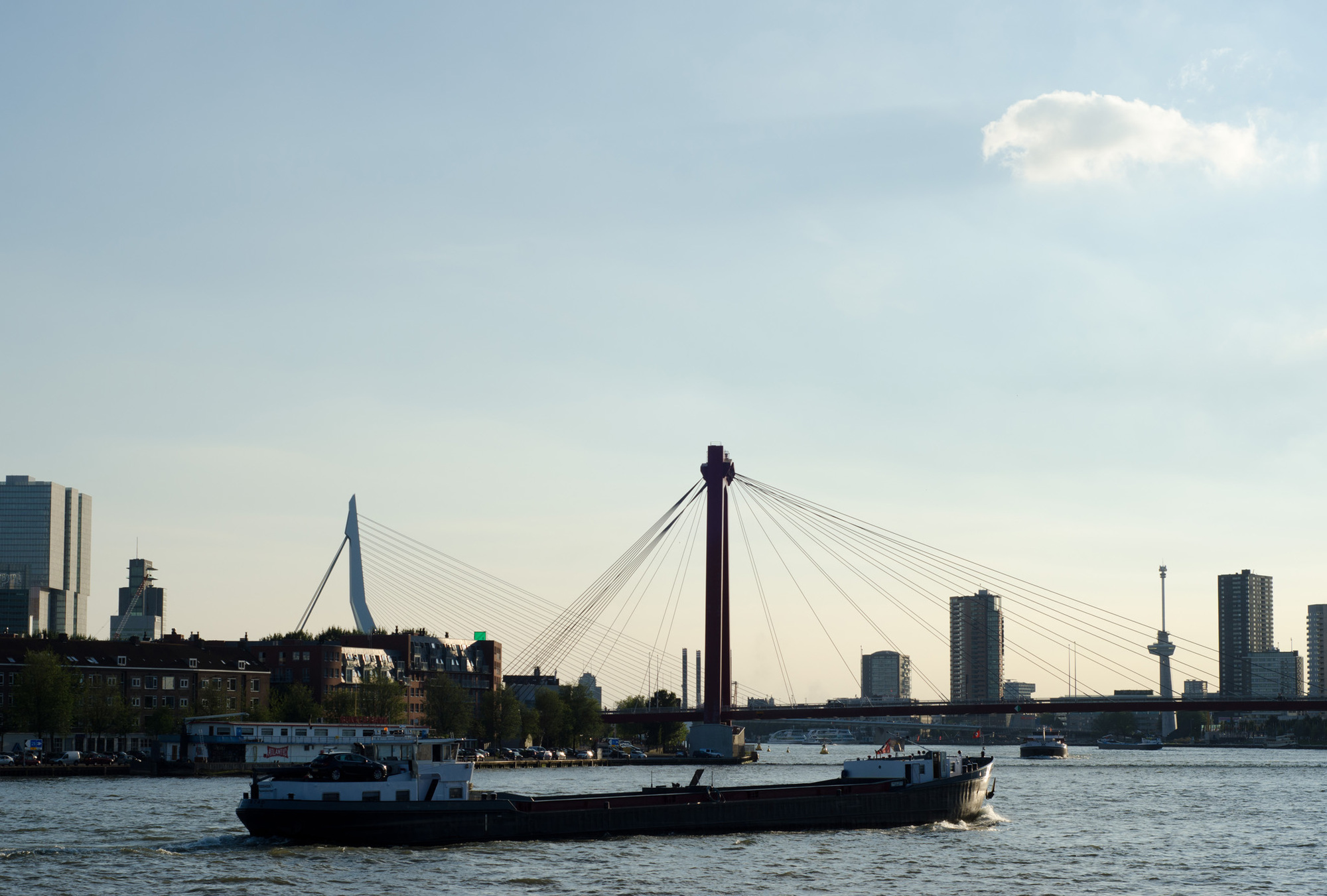 In the decades after World War II the port moved further away from the city leaving the South bank with empty warehouses and abandoned docks. In the late 80’s, early 90’s, the plan emerged to connect the South bank of the city with another bridge next to the existing Maastunnel (1940) and the new Willemsbrug (1981). By opening a new bridge they thought it would attract people and businesses to an area that had a lot of potential but still needed developing. To start with: a connection with the city center through architecture.

On 6 September 1996 Queen Beatrix opened the Erasmusbrug, named after renaissance humanist Erasmus of Rotterdam. The guy already had some schools, a university and a hospital named after him, so why not a bridge? The bridge wasn’t even opened and already had a nickname: The Swan, thanks to its white tones and the 139 meter tall pylon. The bridge, an prominent piece of architecture, was immediately adopted by every Rotterdammer and soon became one of the most loved icons of the city. 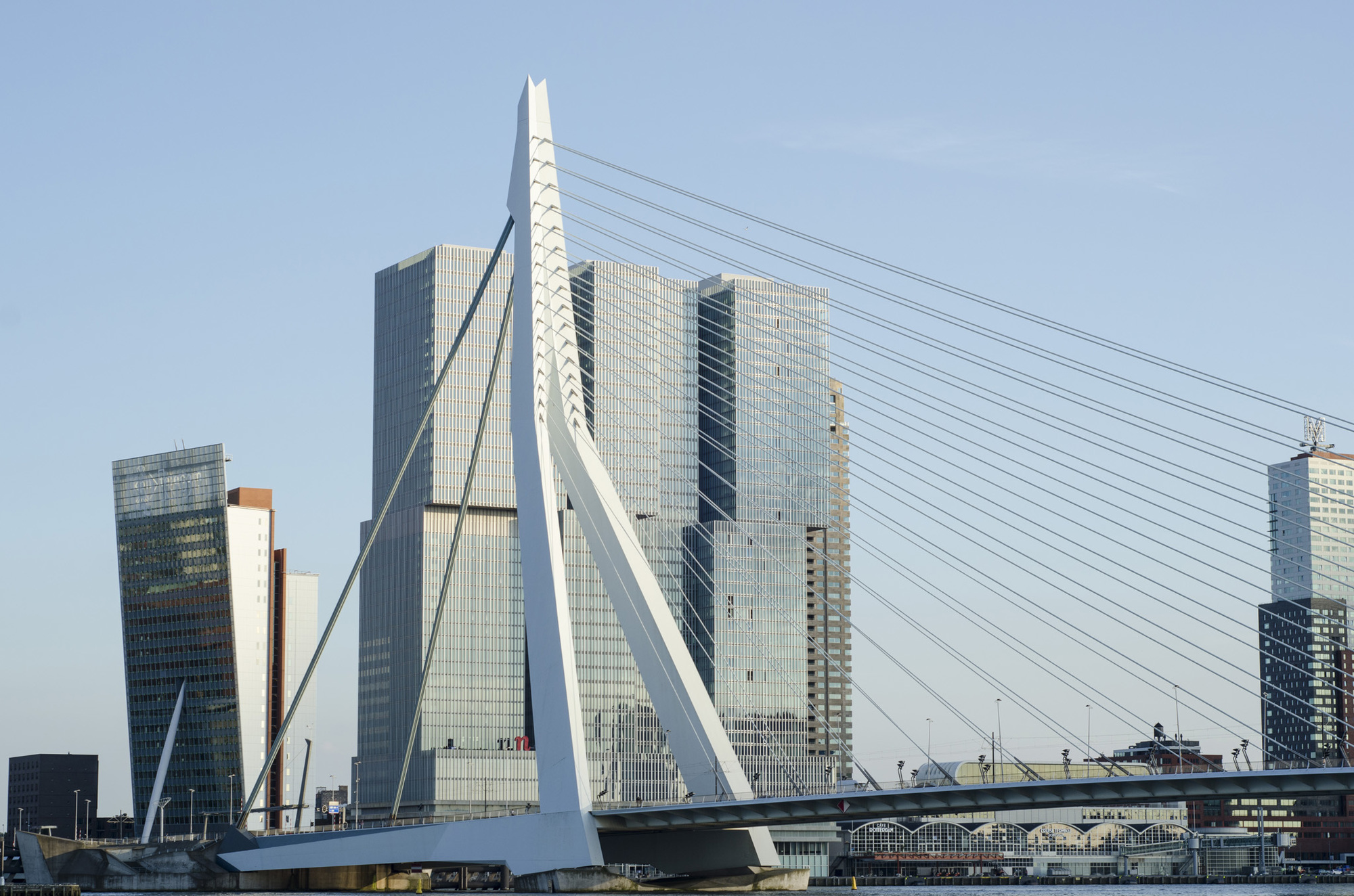 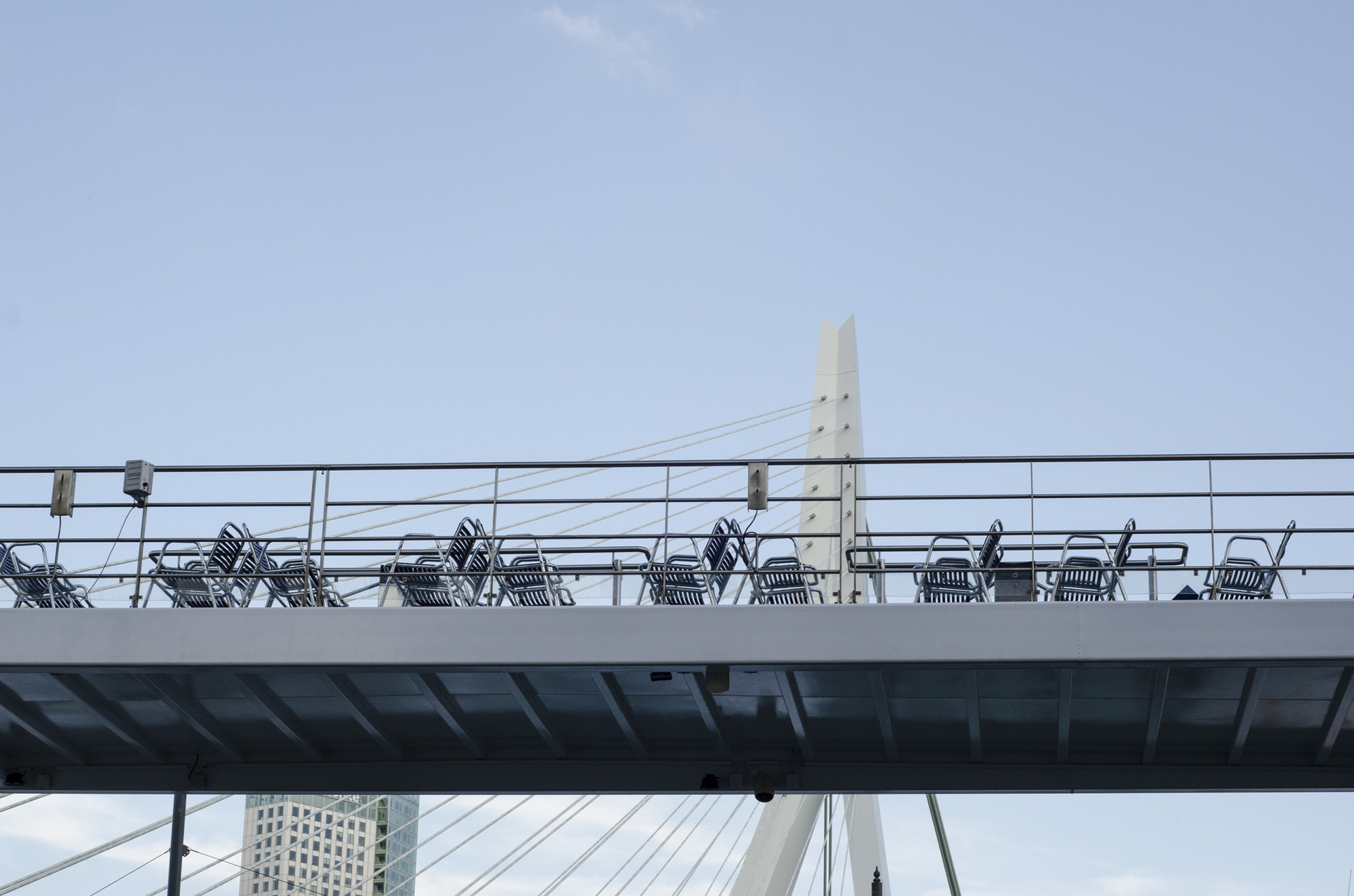 The new bridge was embraced by everyone and appeared to be a great subject for postcards and posters. Most importantly it connected the city center with a newly developed area and the city center could now direct its focus on the other side of the river. For the first time in centuries the South was going to be involved in new plans for the city: De Kop van Zuid.

The Kop van Zuid (‘Head of South’) is that part of town that really makes you feel like you’re in a large metropolitan city with international allure. It’s almost near impossible to imagine it before the arrival of the Erasmus Bridge. The little peninsula was quite desolate in the 90’s apart from some abandoned warehouses and the former head office of the Holland­America Line, a beautiful (and also abandoned) building from 1901. Nowadays this same peninsula is filled with high-rise apartment buildings, offices, restaurants and clubs. That old abandoned head office I just mentioned? Well that’s now home to the famous and super popular Hotel New York. 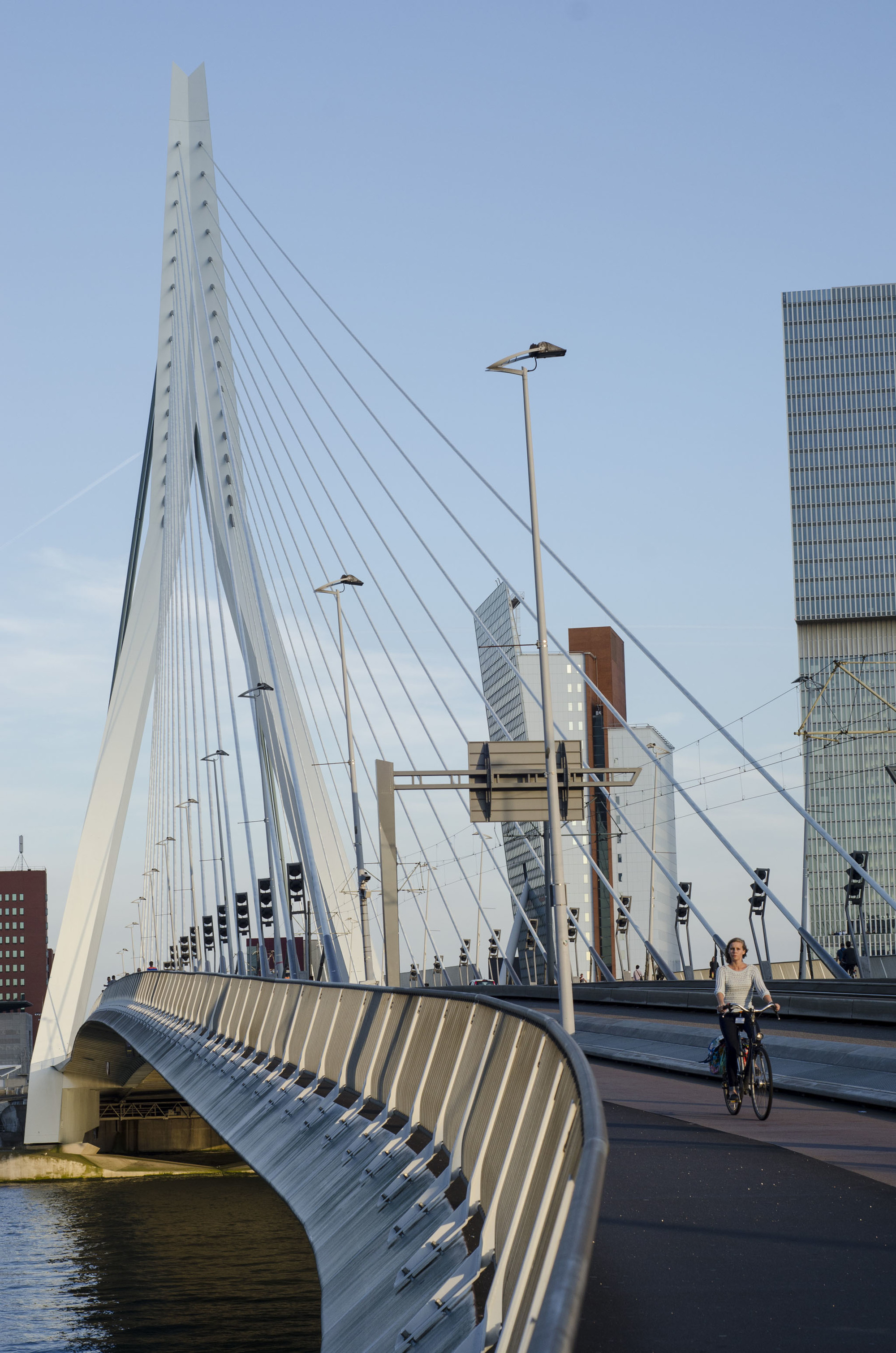 In 2005, it was the start and finish of the Red Bull Air race where planes had to fly underneath the bridge

Every year on New Year’s Eve the national fireworks take place on the Erasmusbridge, which is also broadcasted on TV

According to a survey in 2008, almost 75% of the population of Rotterdam thinks Erasmus is the designer of the Erasmus Bridge. 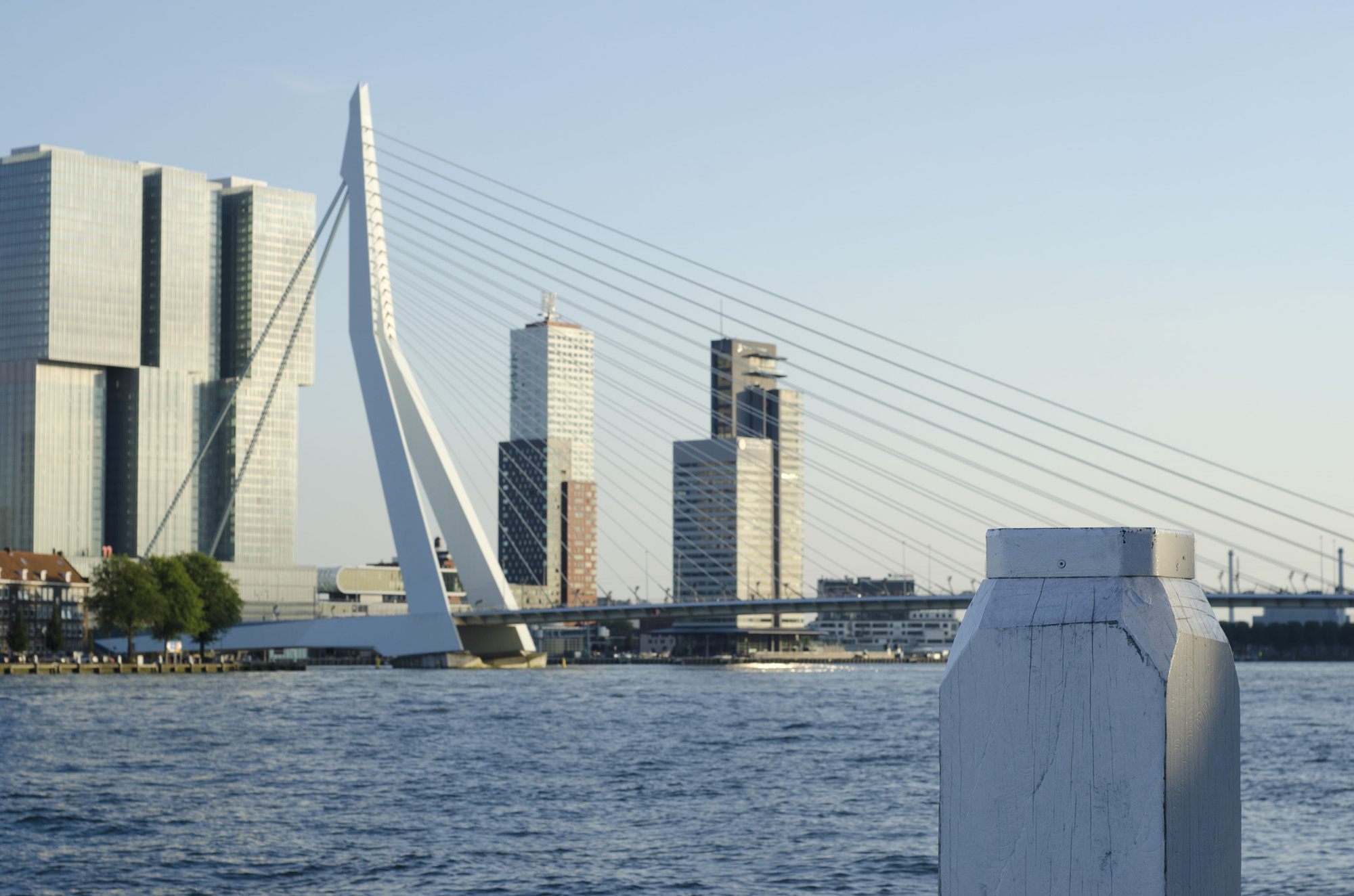