In a new series of food-and-beer pairing dinners in Amsterdam, Oedipus’ Brewing are bringing their motto to life, extending the beer experience beyond, well, just beer.

If you live in Amsterdam, enjoy drinking beer and haven’t encountered Oedipus Brewing yet, then you’ve been drinking in the wrong places. Since humble beginnings back in 2012, the four boys behind the beers have been on an enlightening journey, practising, tasting, sharing and drinking their way to becoming one of the most unique breweries of the Dutch craft beer scene. 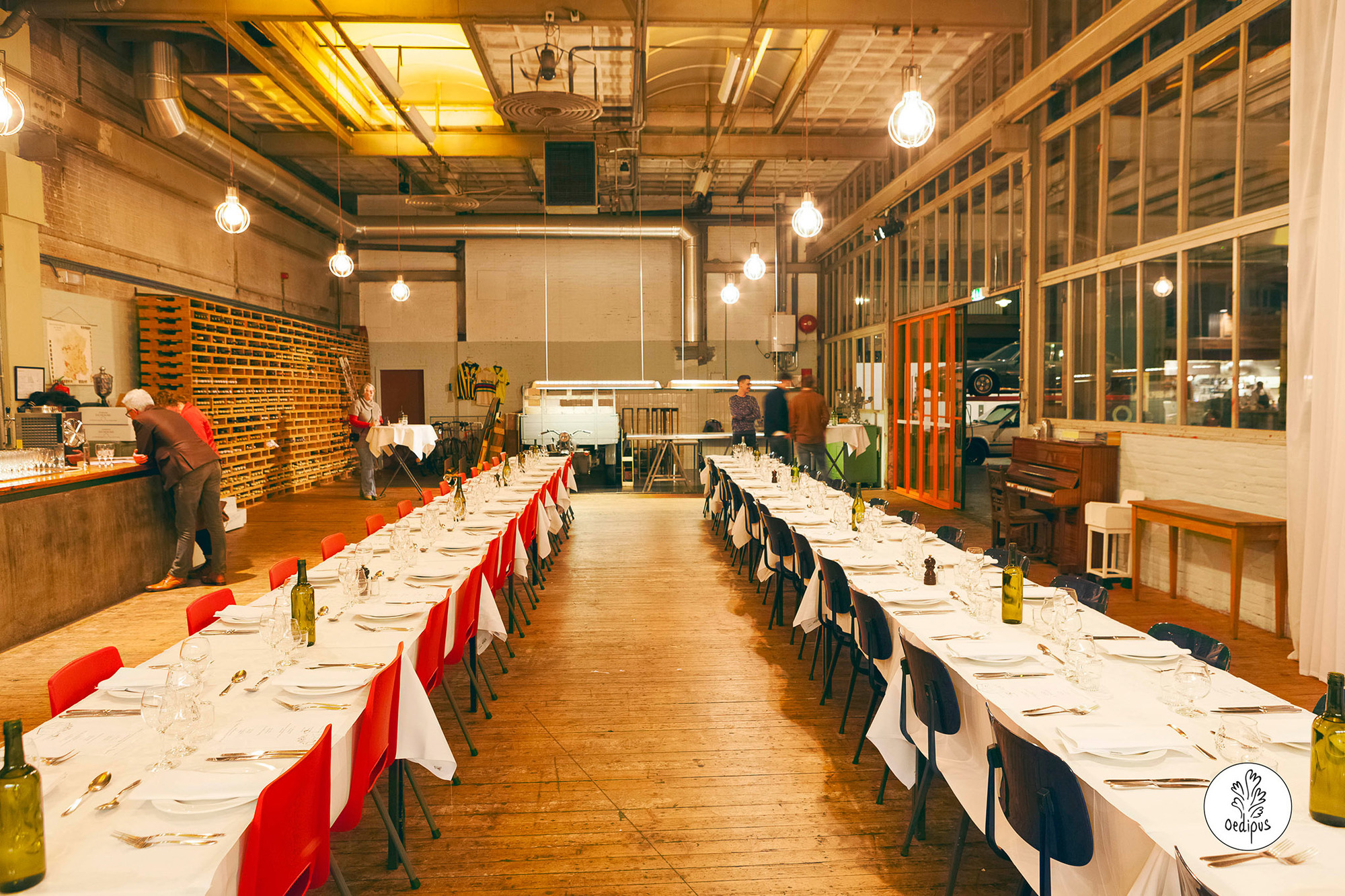 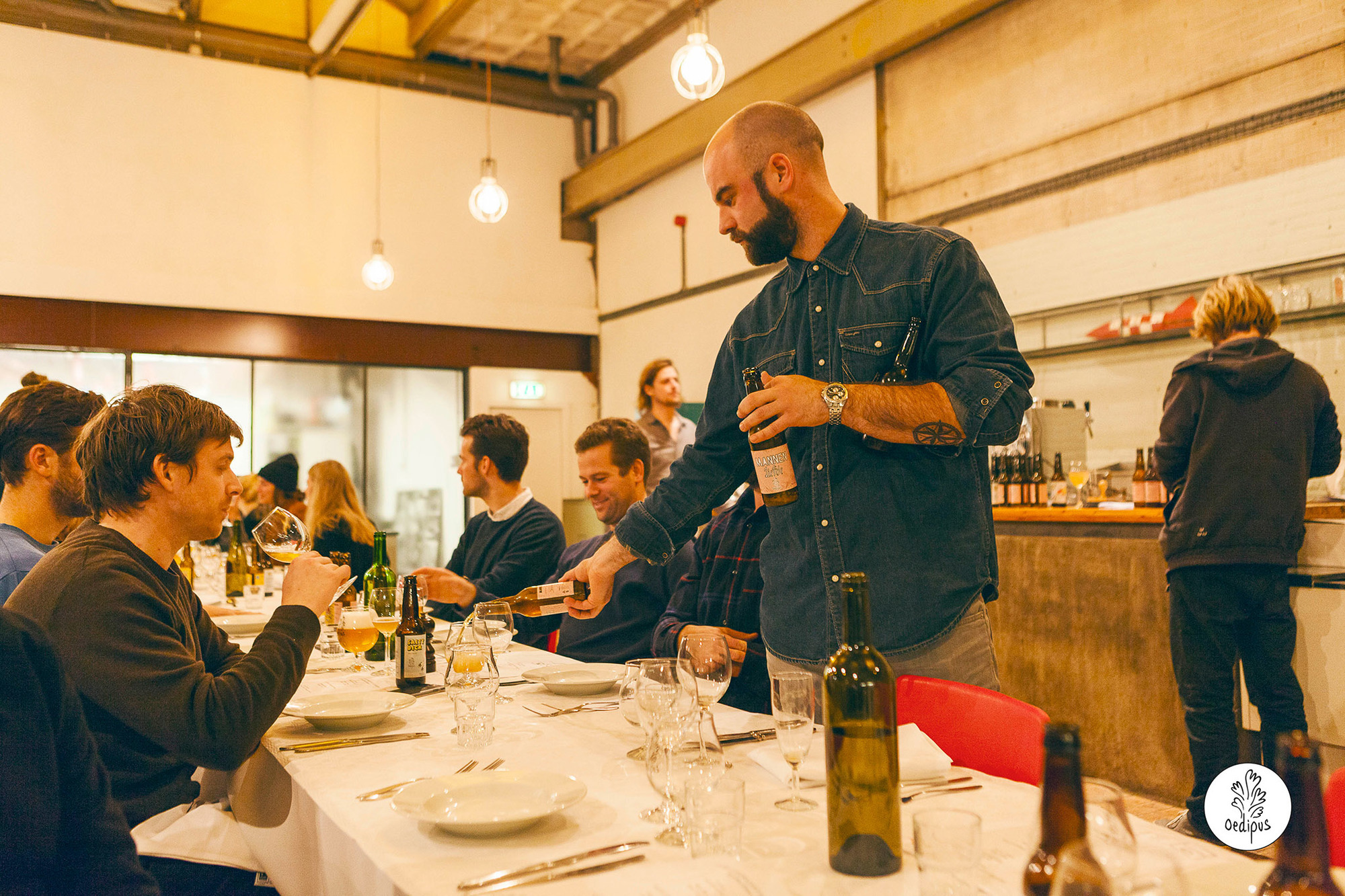 Earlier this year, Oedipus’ dream of starting a brewpub finally came to fruition with their latest home in Amsterdam Noord. Their combined production facility, tap-room and creative melting pot plays host to private beer tastings (with well-paired bar snacks), sunny weekend sessions that are open to the thirsty public and some already legendary food-and-beer events like the Burger Beer Battle that will see its final showdown on December 12. Now the boys are getting friendly with their neighbours in Noord… 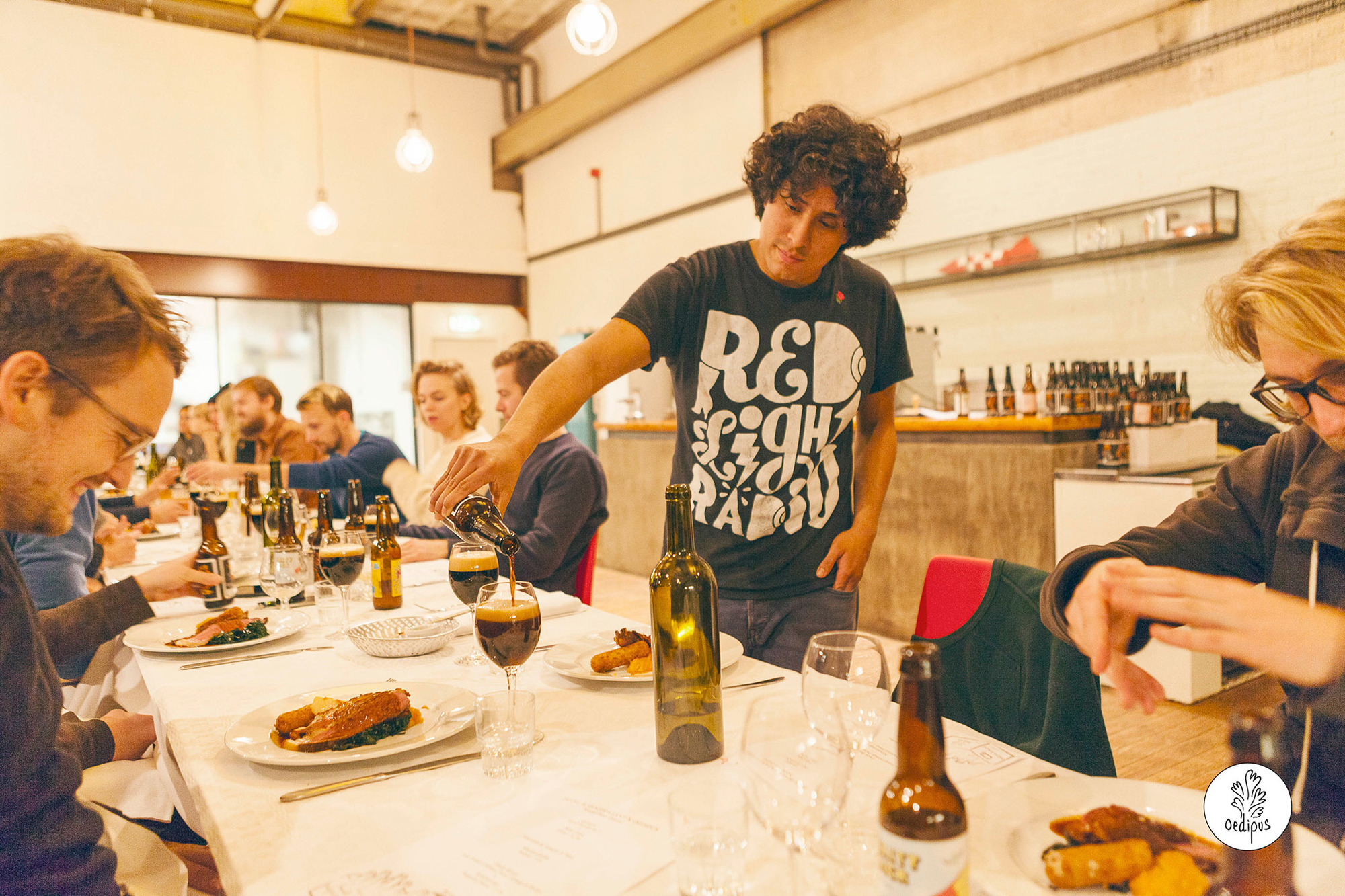 Shifting the notion of food-and-beer pairing up a gear, last Friday saw the first of a series of Noord Beer Dinners at the locally revered restaurant, Hotel De Goudfazant. Conceived by Oedipus’ man-about-tastings, Carl Schröder, in cahoots with chefs at De Goudfazant, the dinner was a lavish affair, the likes of which are usually reserved for wine lovers..


“It was nice to work with beer instead of wine – we found it really interesting with the food. Plus Oedipus pulls a fun, young crowd.” – Jordy Van Der Panne (Hotel De Goudfazant) 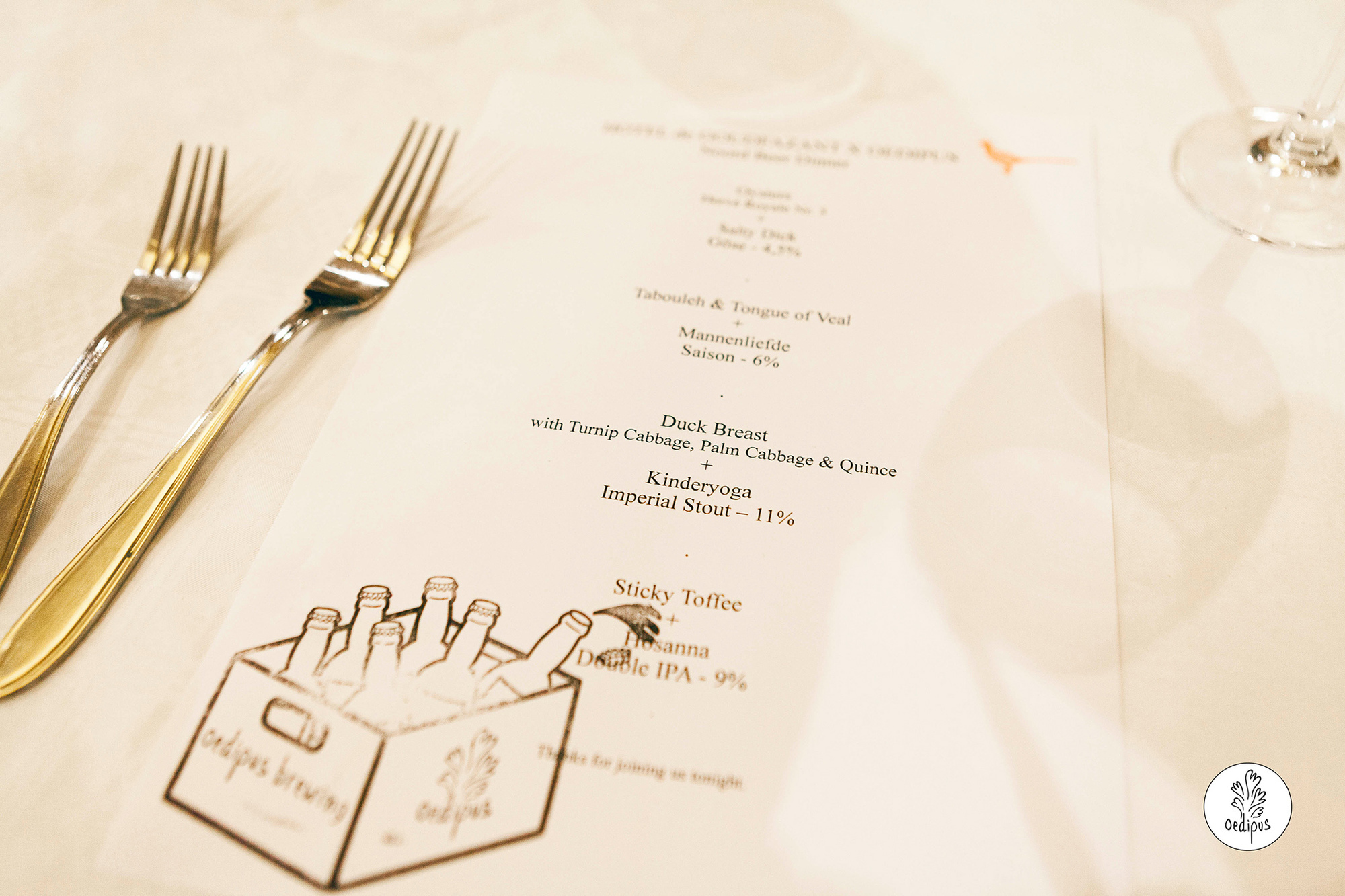 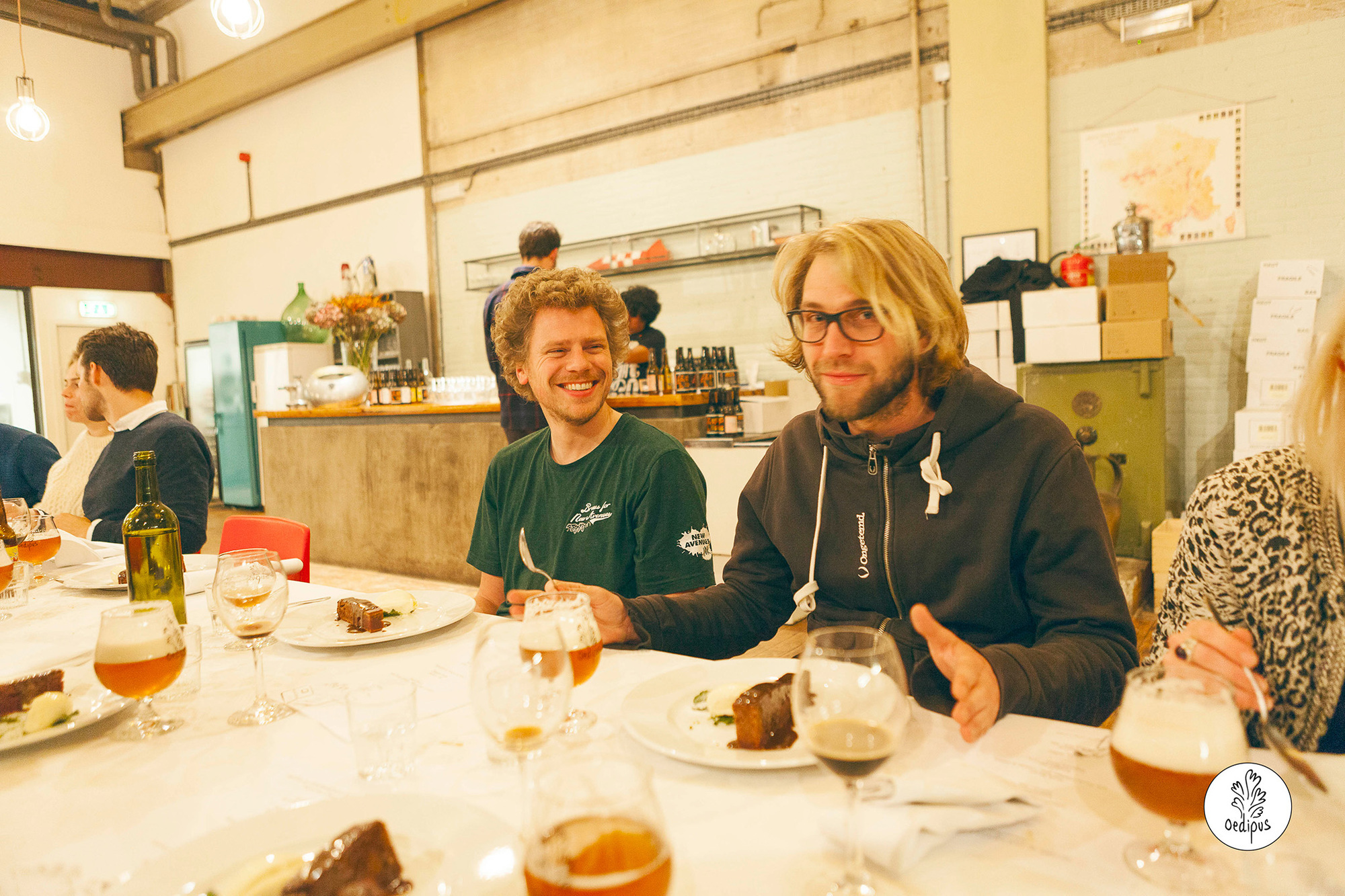 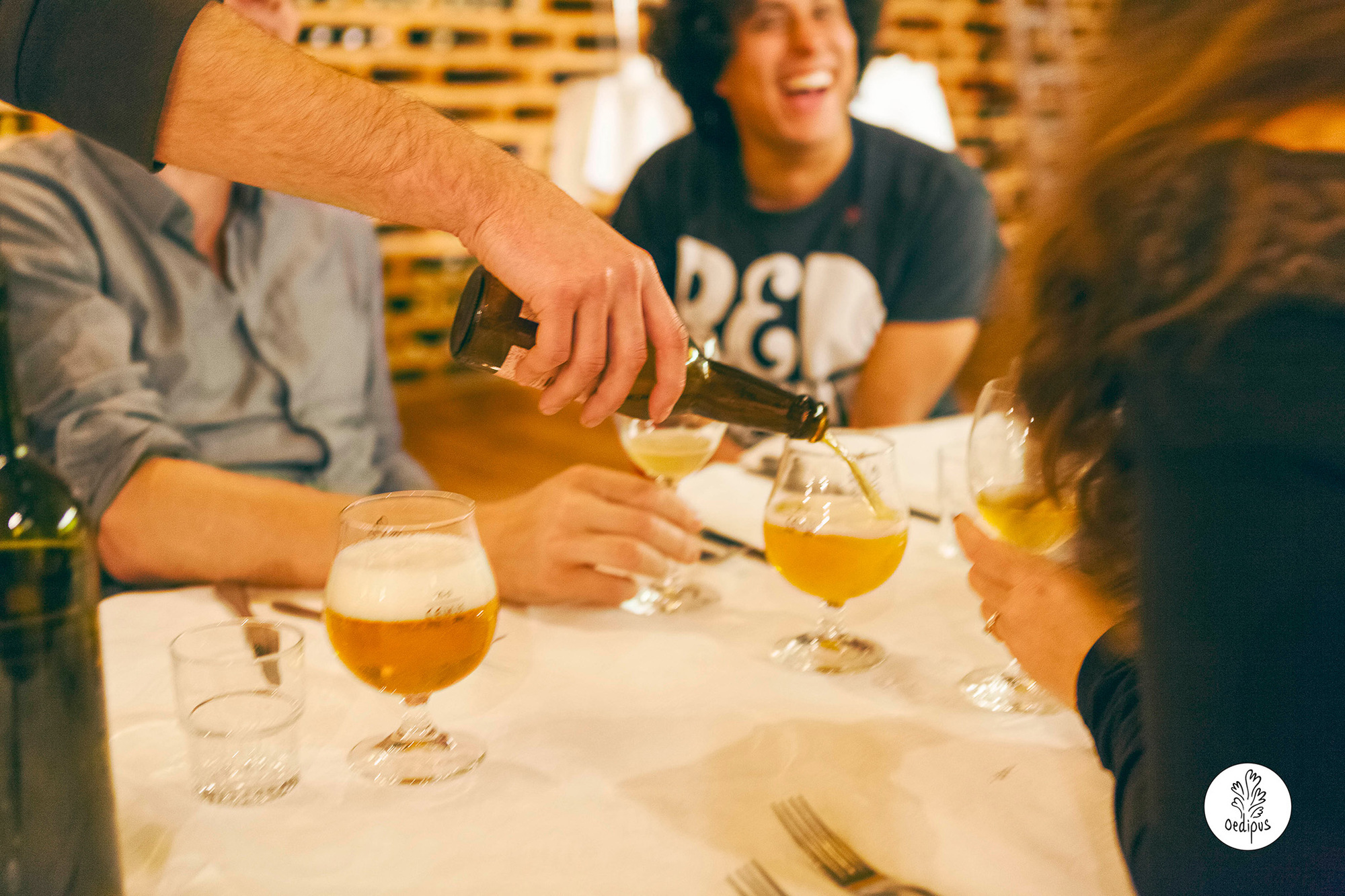 As Carl explains, beer offers a wide variety of taste, colour and weight. Beer’s flavours cover a broad range, from sweet and sour to sometimes even salty. That makes the food pairing possibilities very exciting and almost endless.


“Where wine is all about the subtle nuances, beer is often a bit more outspoken. Beer’s vast spectrum of flavours can either compliment or contrast with just about anything”, says Carl Schröder.

65 lucky guests were treated to four courses of deliciousness, each one offering a different taste sensation. ‘Salty Dick’ – a refreshing and slightly funky Gose beer with grapefruit and lime zest – was paired with fresh oysters and the result was creamy, salty and zingy. ‘Mannenliefde’, the boys’ first and most popular beer, was brought in to counterbalance the fatty, meaty flavours of veal tongue. At the same time, hints of lemongrass and Szechuan pepper in the Saison beer complimented the spiced tabouleh that accompanied. 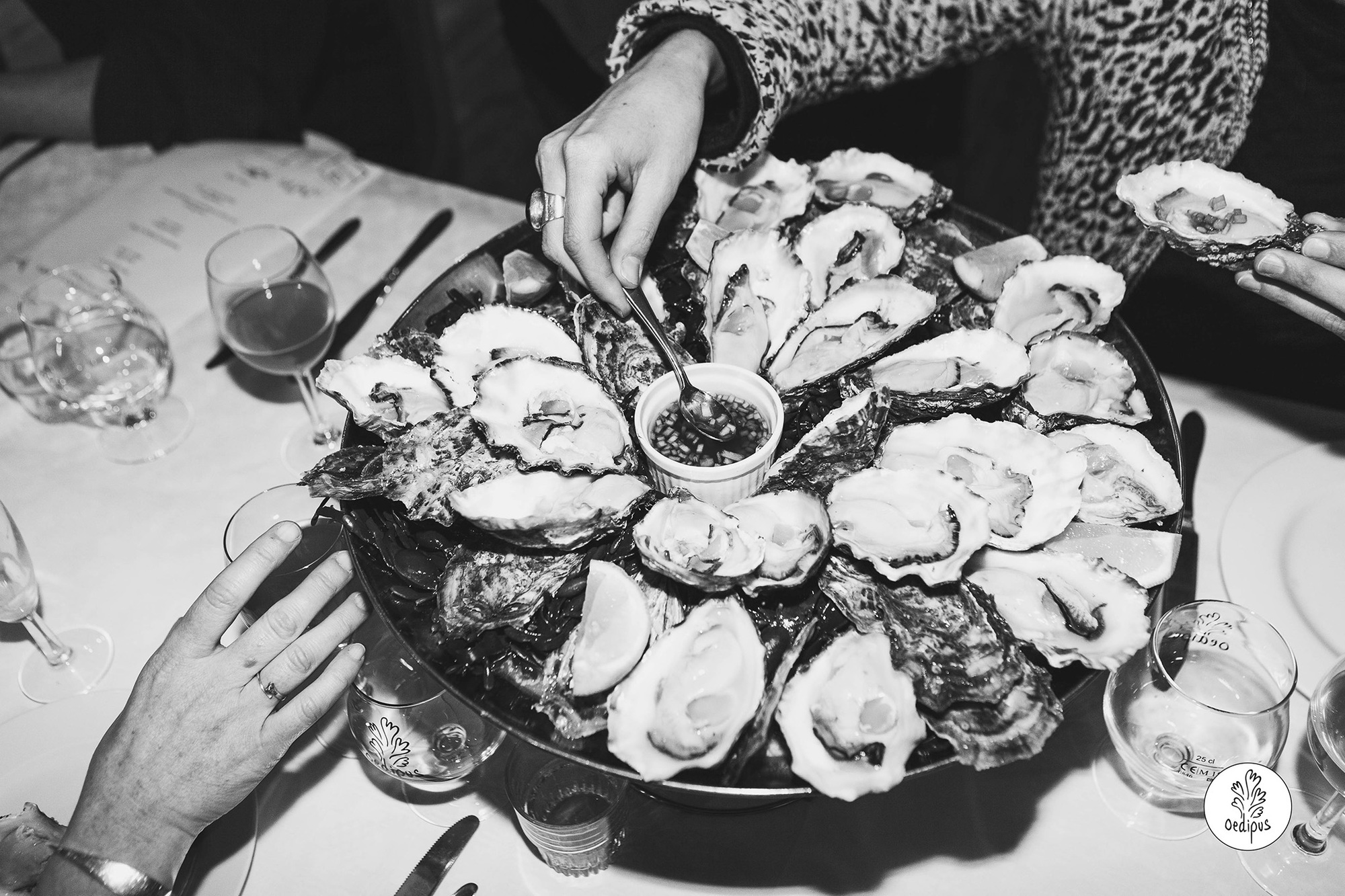 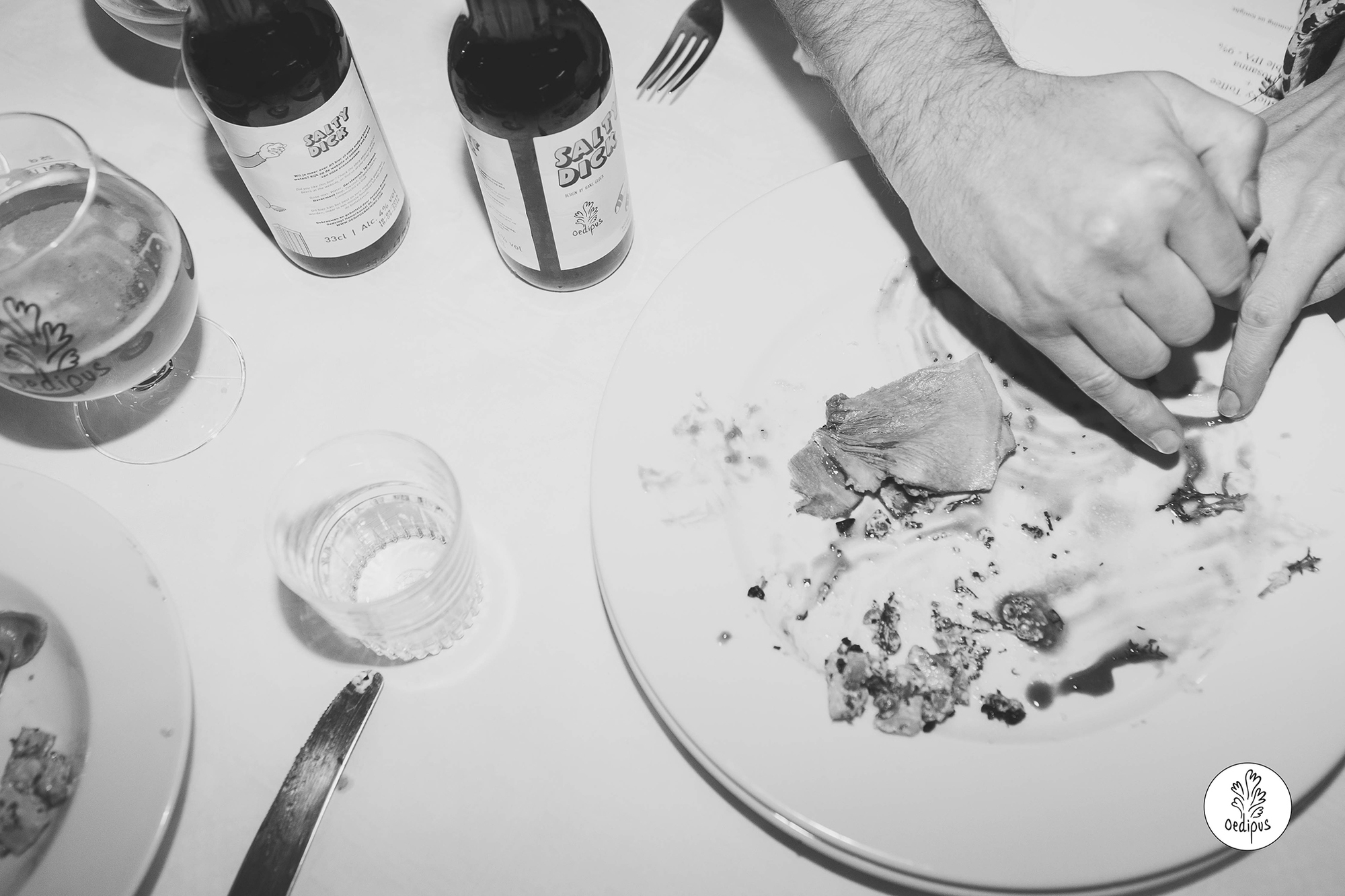 “Pairing can be quite challenging, sometimes you come across combinations that really don’t work. But on the other hand some results are really magical – they almost bring forth a new, additional flavour”, says Carl.

As one guest commented at the end of the night: ”I value Oedipus beer even more now, in combination with the food”.

Oedipus’ plan is to continue to grow their neighbourly network throughout Amsterdam Noord. Next up, in January 2016, will be a food-and-beer pairing dinner with Café Restaurant Stork, a unique fish and seafood restaurant who showcase whatever the ‘catch of the day’ is. 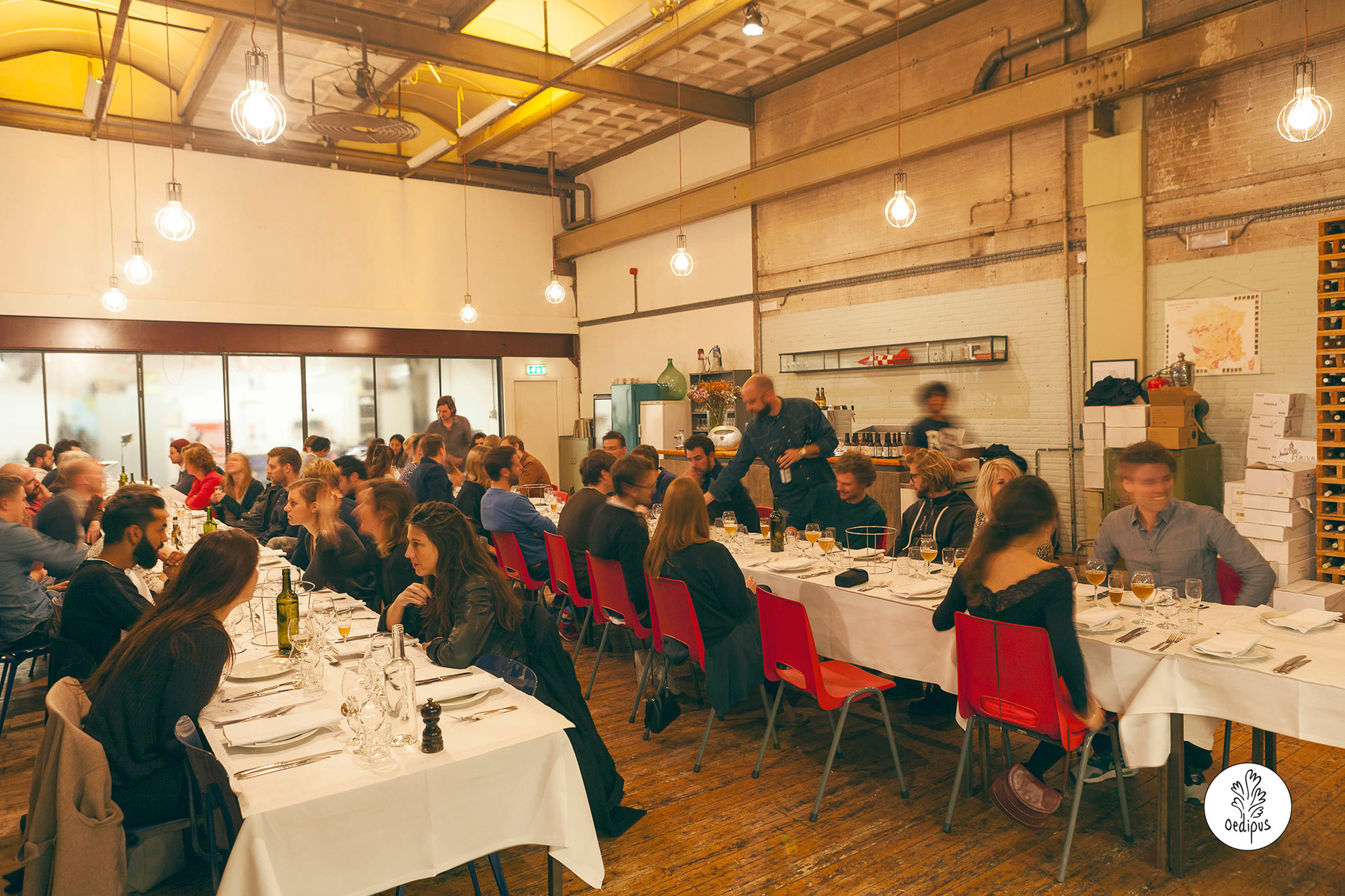 “The first Noord Beer Dinner was a great start of the series. We wanna do more of those, especially in Noord with the neighbours. It’s all part of the bigger Oedipus' experience.” – Rick, Oedipus 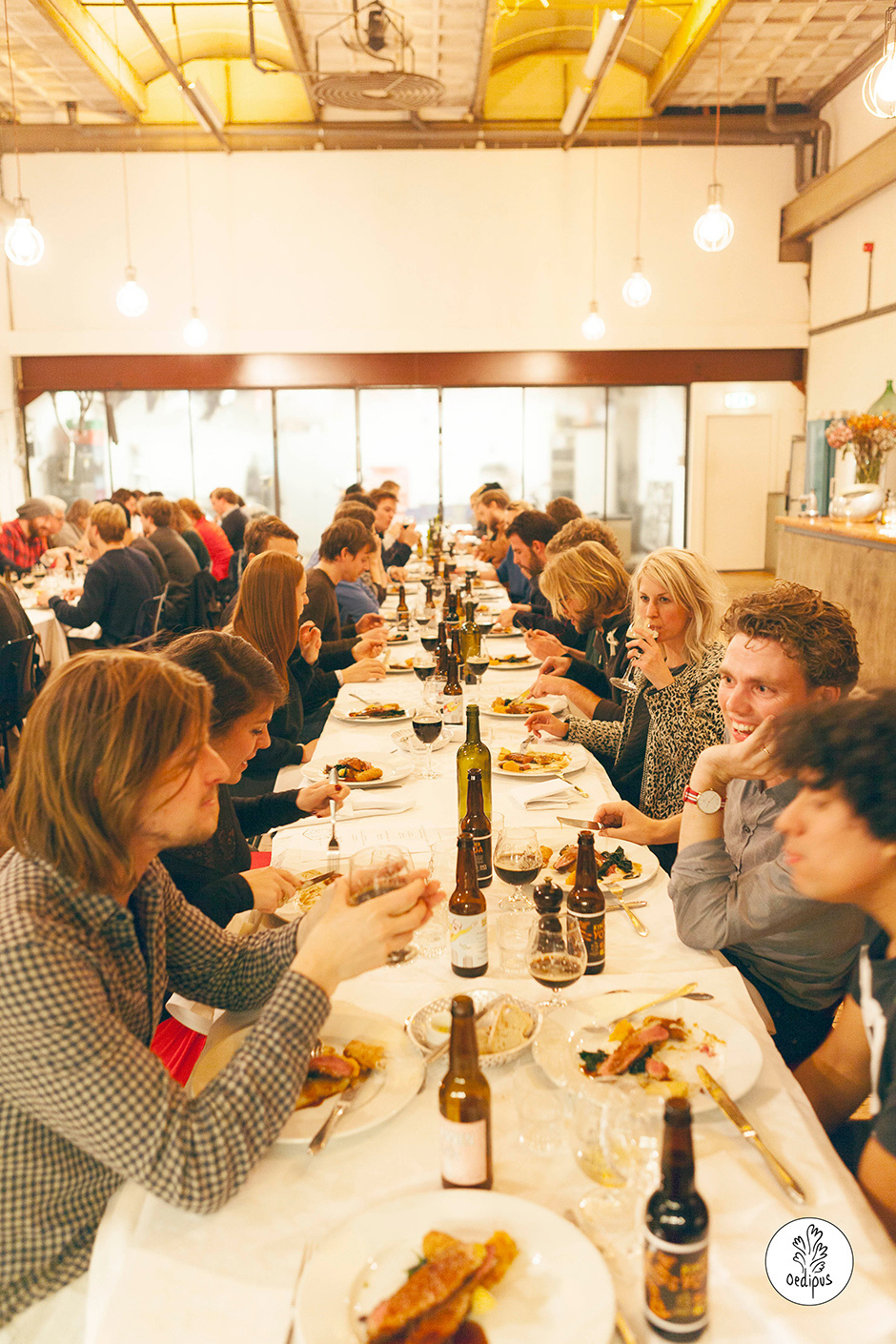 #hetlevenismeerdanbier (there is more to life than beer)

Visit Oedipus for more info on the boys, the beers and some super stories and graphics. Contact Carl at Oedipus to organise a tasting: tasting@oedipus.com