Correspondent Dario joined the Baque do tejo to see how the Brazilian Maracatu is conquering Lisbon.

Lisbon, 25th of February 2017. It’s Carnival and a colorful parade crosses the downtown of the city, filling the air with frenetic dances and the sound of voices and percussions. Both tourist and locals look at the parade with curiosity, attracted by the joyful rhythms, and many of them just can’t resist and join the dance. The protagonist is the musical project Baque do Tejo, that is bringing the sound and the culture of Brazilian Maracatu through Lisbon and Portugal. 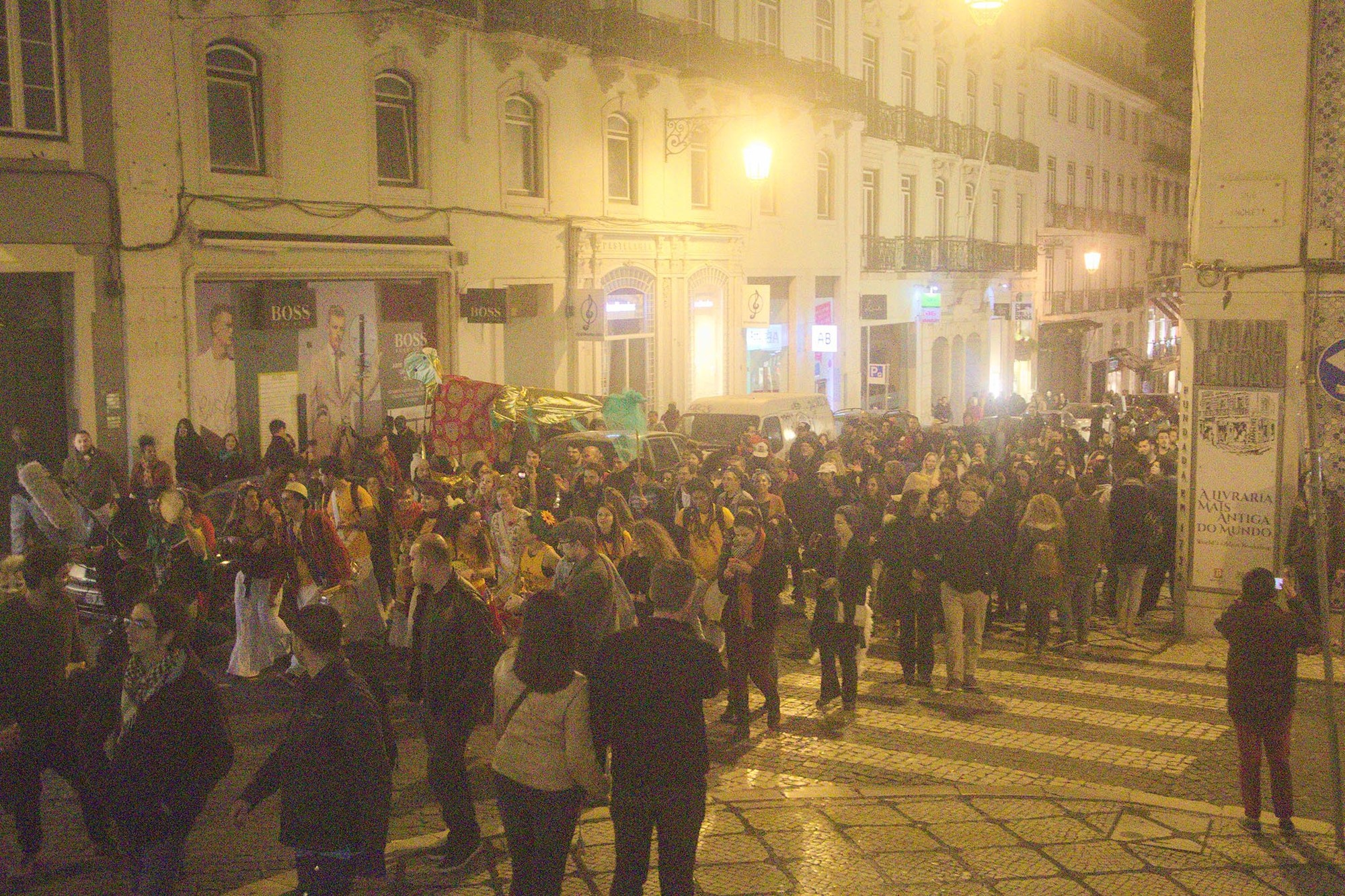 Maracatu is one of the oldest folk musical traditions from Brasil, with its first testimony dating the early XVIII century. Raised from the African populations who moved, or were forced to move, to Brasil. The Brazilian Maracatu was born in Pernambuco, a region in the Northeast of Brasil. Here the African community had to preserve its native religion, called candomblé, from the persecution so that men started to organize parades, using a large variety of percussions and accompanied by dances powerful chorus, occupying the streets in order to hide the women celebrating in the houses.

During the years, the parade got more institutionalized, representing the traditional coronation of a king and a queen, accompanied by a lot of other characters who compose the royal court.

Keeping its status of a symbol of the resistance of the African traditions, Maracatu grew its popularity between the ’80 and the ’90, having a large diffusion throughout Brasil. 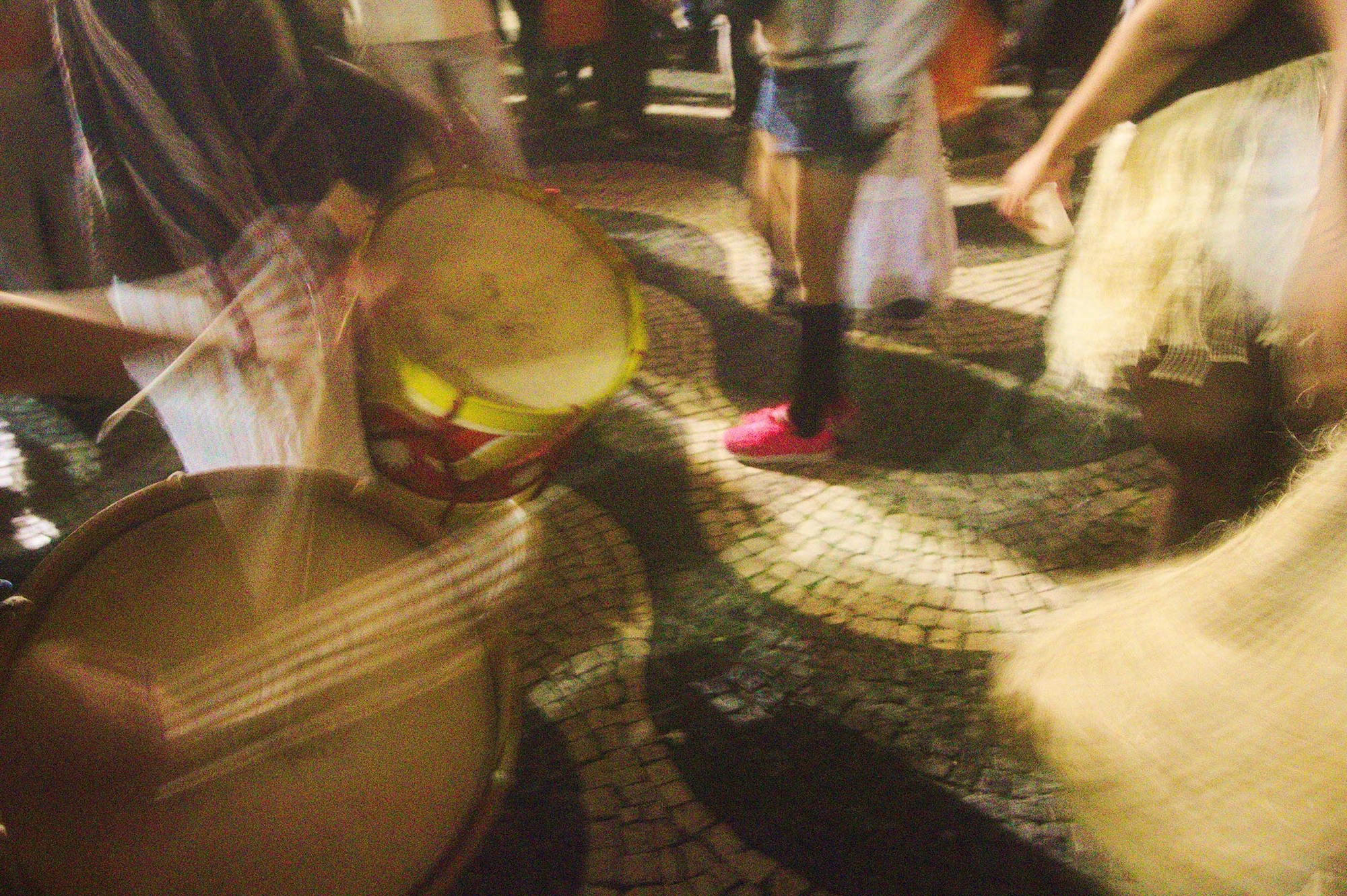 The phenomena of globalization, together with the inheritance of colonialism and the common language, have made of Portugal one of the main European destinations for Brazilian emigration. With these premises, it was quite easy to recreate this kind of atmosphere and sound in Lisbon. 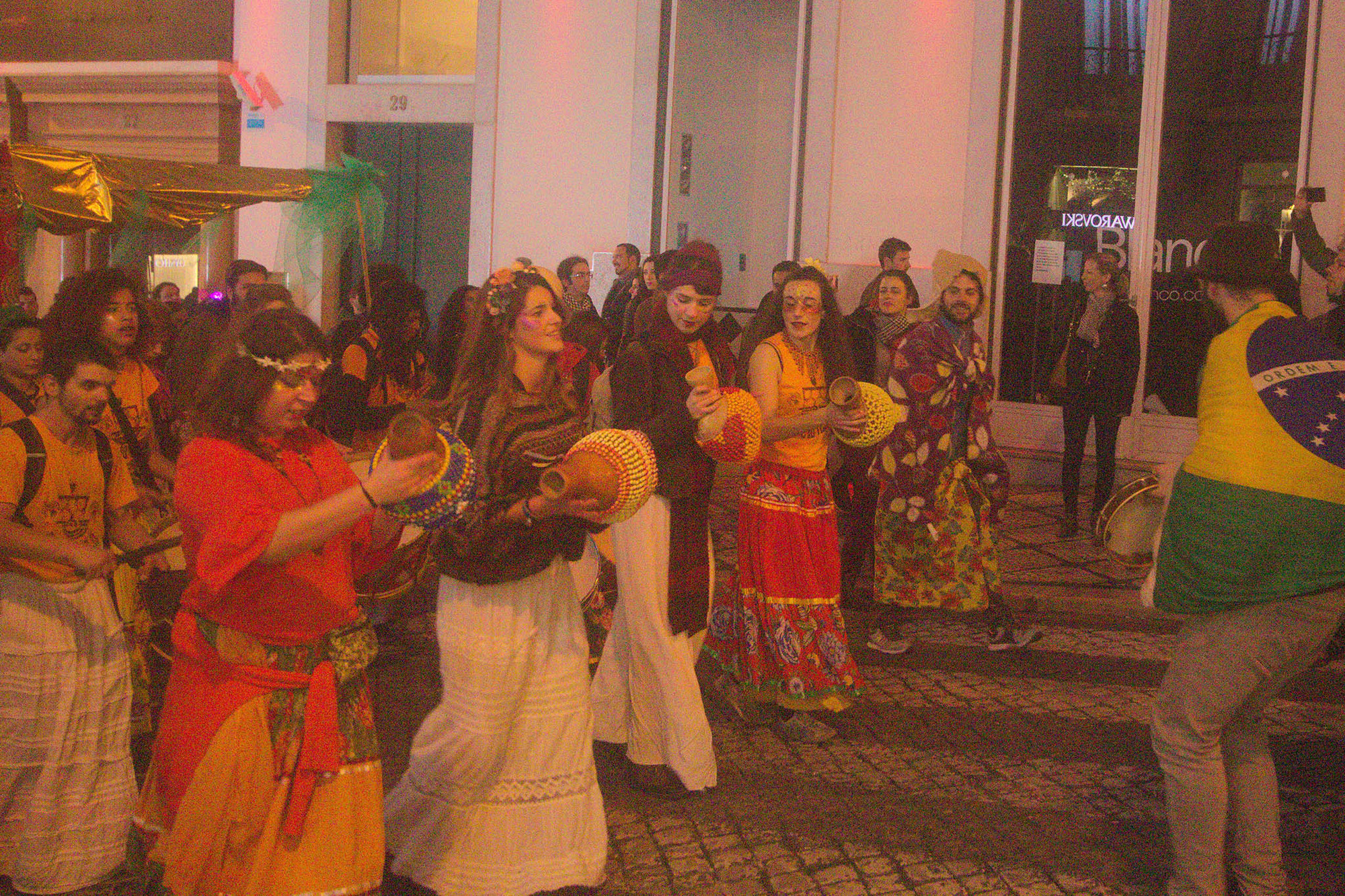 Baque do Tejo is a non-profit project, in which the members share their passion with the common objective of learning, appreciating and expanding this cultural movement, as a form of social inclusion. Opened to the people, Baque do Tejo collected a lot of members from all over the world (apart from Brasil, you can meet people from Portugal, Argentina, Italy, England, Austria…), united by the love for music and the wish of meeting cultures.

For each person who has to leave following his own life project, there are always newcomers ready to enter, easily involved with lessons for beginners. Baque do Tejo has become well known and are taking part in various festivals and manifestation in Lisbon and Portugal, playing across parades and concerts, collaborating with artists and musicians. 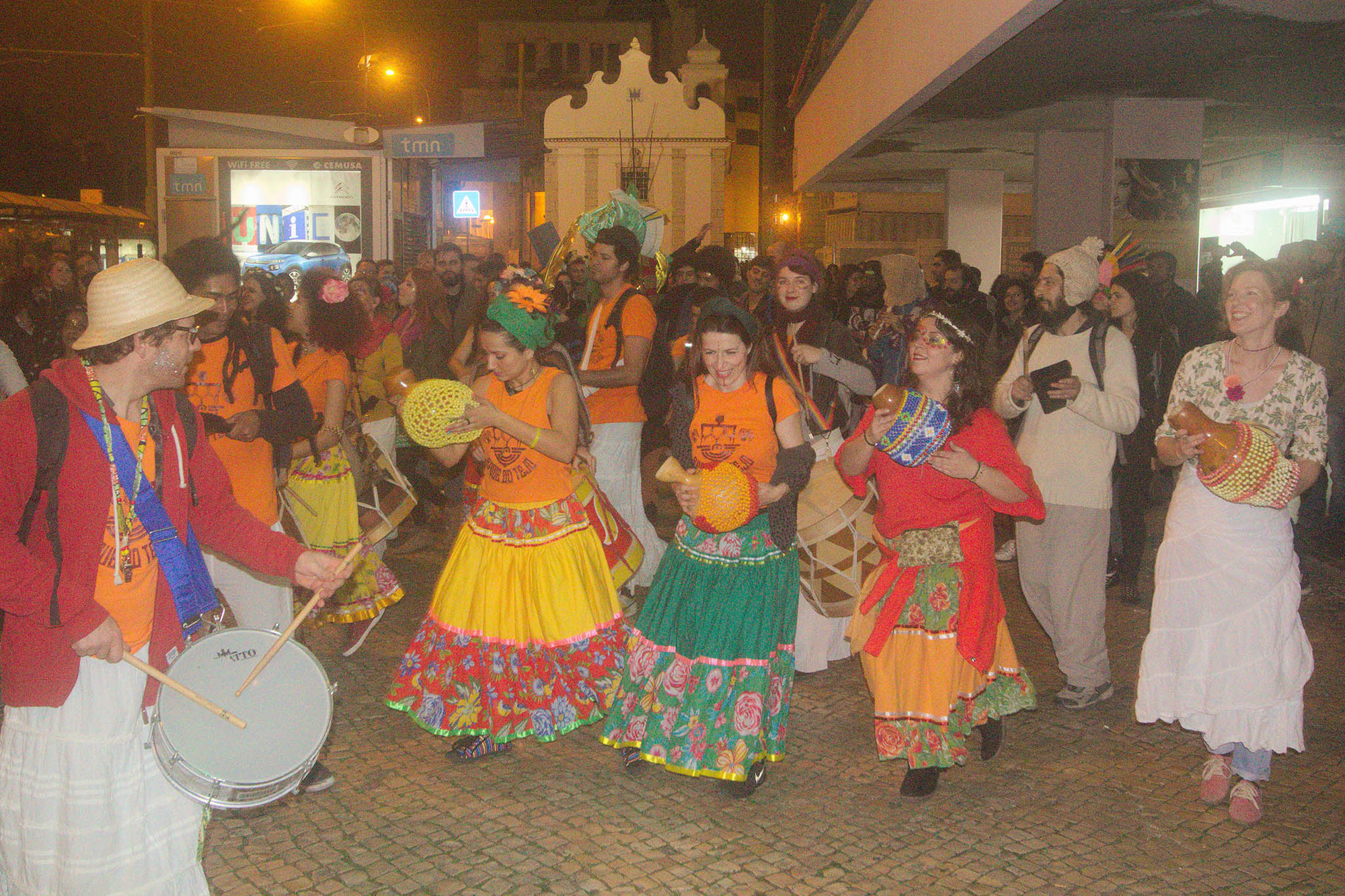 But the project is now involved a lot of other important social activities. Keeping its roots between Mouraria and Arroios, one of the more multi-ethnic areas of the city, Baque do Tejo has created courses for children of neighborhoods that end up with concerts, involving them to play and dance.


"...united by the love for music and the wish of meeting cultures."

Besides this, they’re also collaborating with associations that help young people with mental and physical diseases, using music as a therapy. Starting from little games that break the ice with the participants, to the members of the group involving them with simple rhythms and handclapping. In only a few minutes, the bravest start playing simple percussions together with the band, while others are taken in with group dances, in an atmosphere of great happiness. 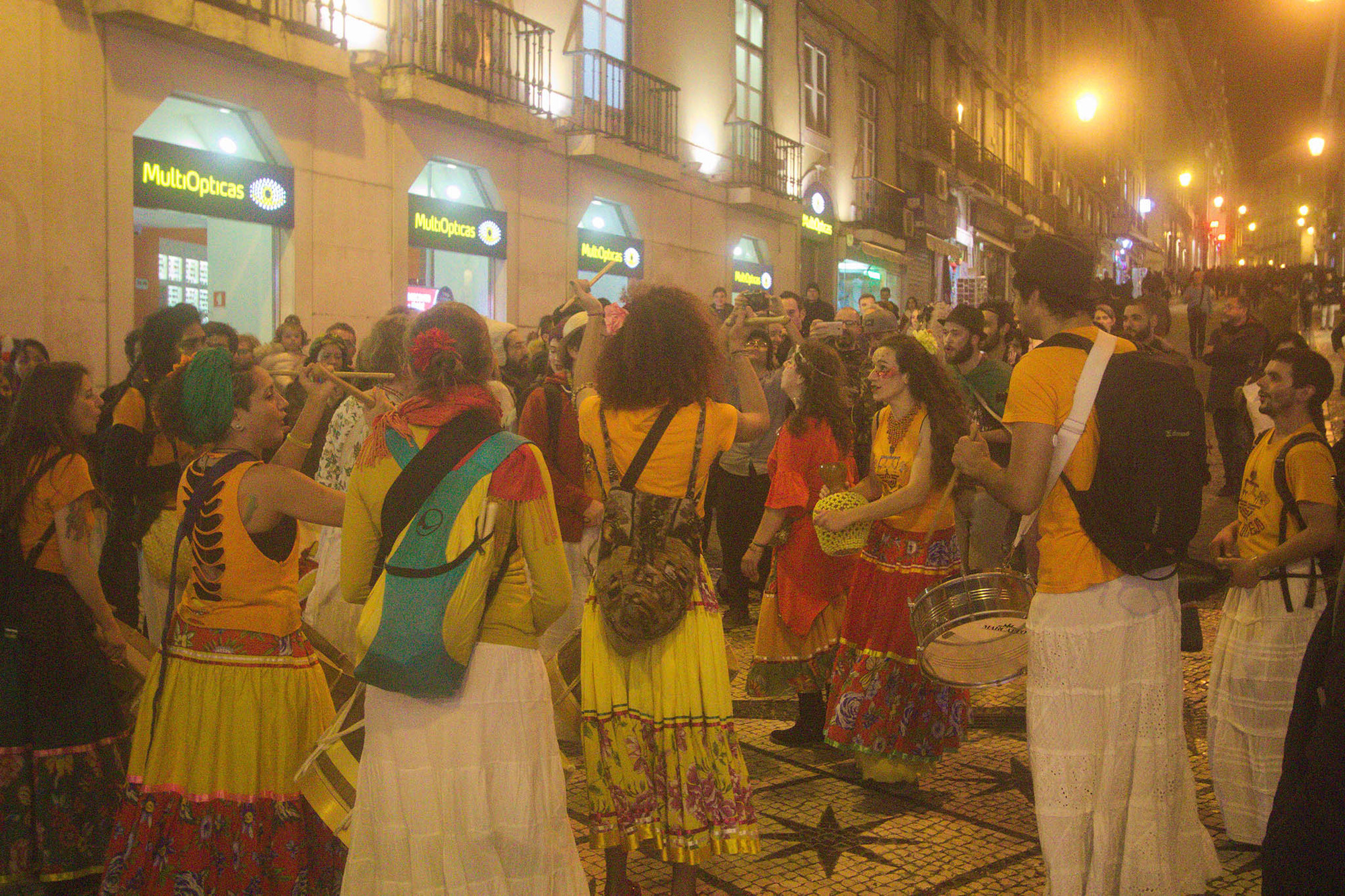 Words and Photography by Dario.