A bright city lightened up

I have to admit that I have been looking forward to the third edition of the Amsterdam Light Festival for a few months now. It brightens up the city in days of darkness and around December holidays. When the temperature drops, it makes walking or cycling around Amsterdam a bit warmer. Sigh!

Amsterdam Light Festival is quite a young festival. It has only been running for three years now, but it feels like it has been part of the city much longer. There was however already a very small version in 2009 (Christmas Parade) and 2010 (Winter Magic Amsterdam). 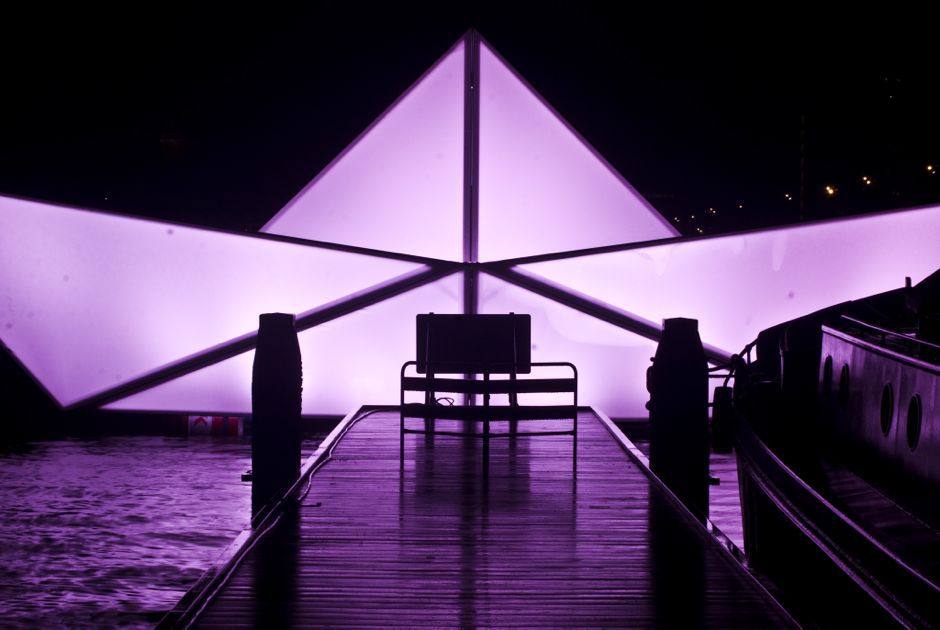 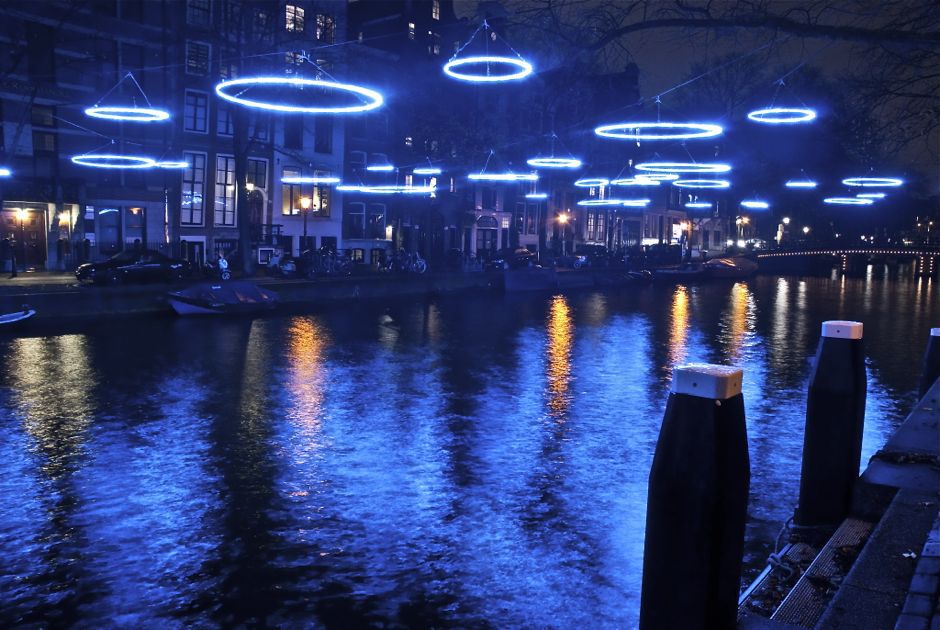 They skipped a year and in 2012 it saw the birth of Amsterdam Light Festival in which art, light and water meet each other. In the city centre of Amsterdam, especially around Oosterdok, Waterlooplein and Amstel, light installations are installed. People can walk a route as soon as the sun has set and the lights are turned on.

Here's a peek for you guys to get the gist of what to expect... 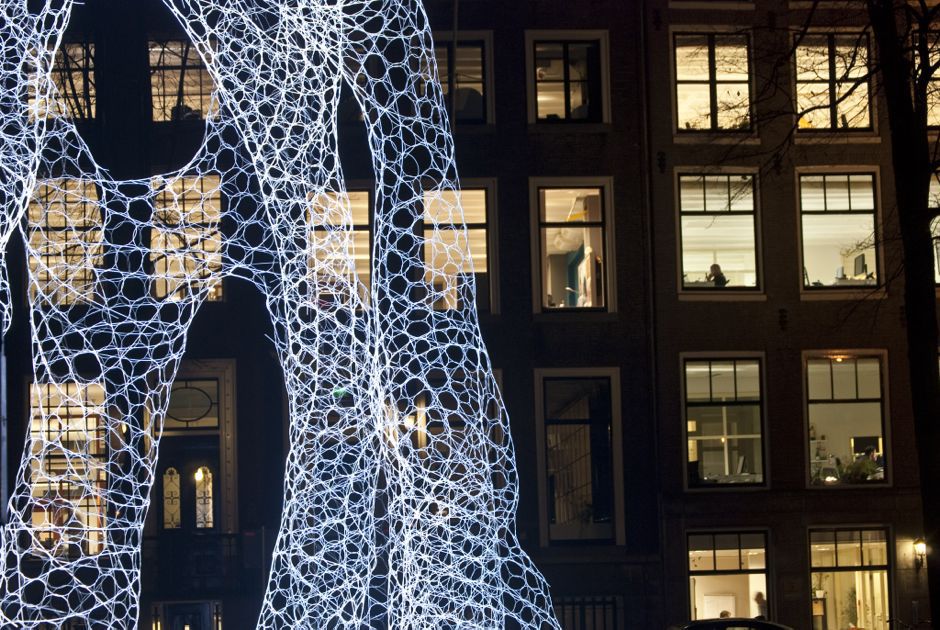 This year the festival is bigger and perhaps even better. Around 40 installations have been created by artists from all over the world. The area of where it all happens is much wider.

For example: the Herengracht canal now has 9 installations from the Amstel until the Brouwersgracht side. In previous years it was mainly focused between Oosterdok and Amstel.

There are two routes that you can follow.
1) Water Colors – You can either hop on a canal boat or walk/cycle to see the artworks.
2) Illuminade – This is the walking only route. I highly recommend you to reserve two of your precious evenings.

During one evening you can enjoy the Water Color artworks and the other evening will be for Illuminade. There is so much to see and you really should not hurry too much. 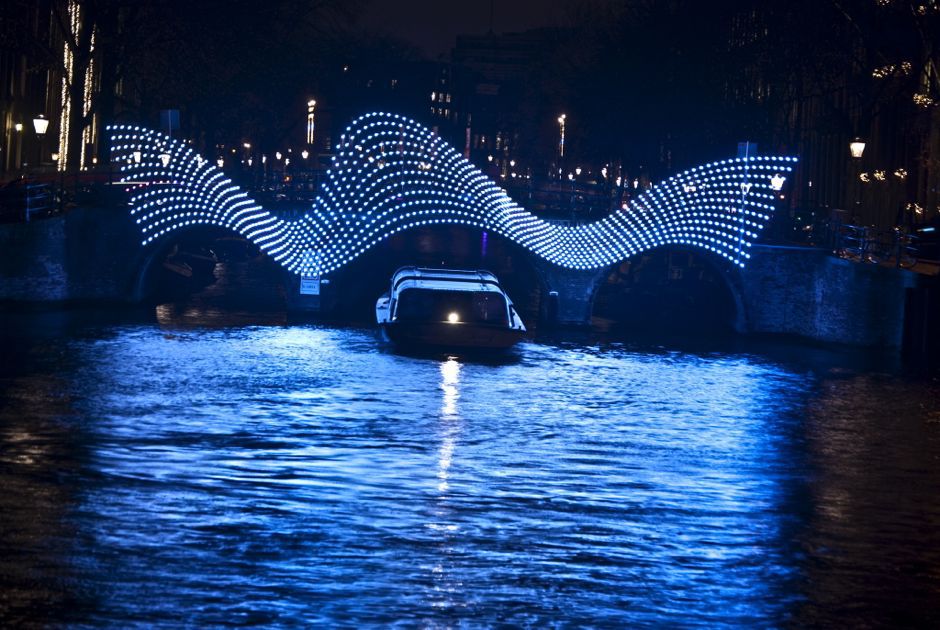 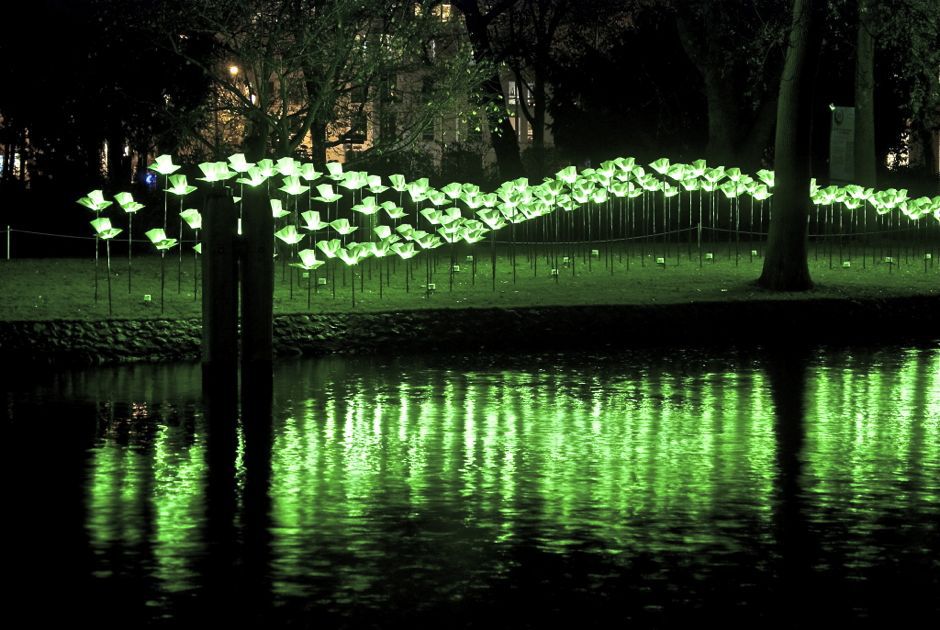 'A Bright City' is the theme for this year’s Amsterdam Light Festival and artists had to submit an idea that has a connection with that particular theme.

Not only has the festival grown in size, also the amount of submissions has been immense. Around 1.000 ideas were submitted from established artists, students, young artists and amateurs. Selected installations all have a strong connection with light.

Not just shining a light on an object, but interaction, reflection, playfulness and fun. What I was hoping for most was more interaction with the audience. You know, when you do something the installation will show changes. Interaction there is this year. Oh yes! 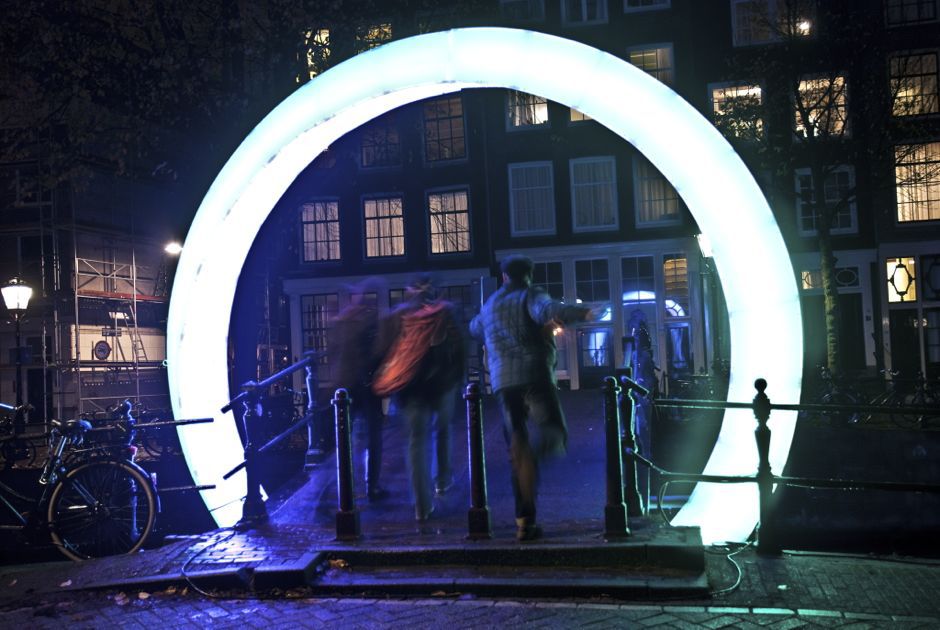 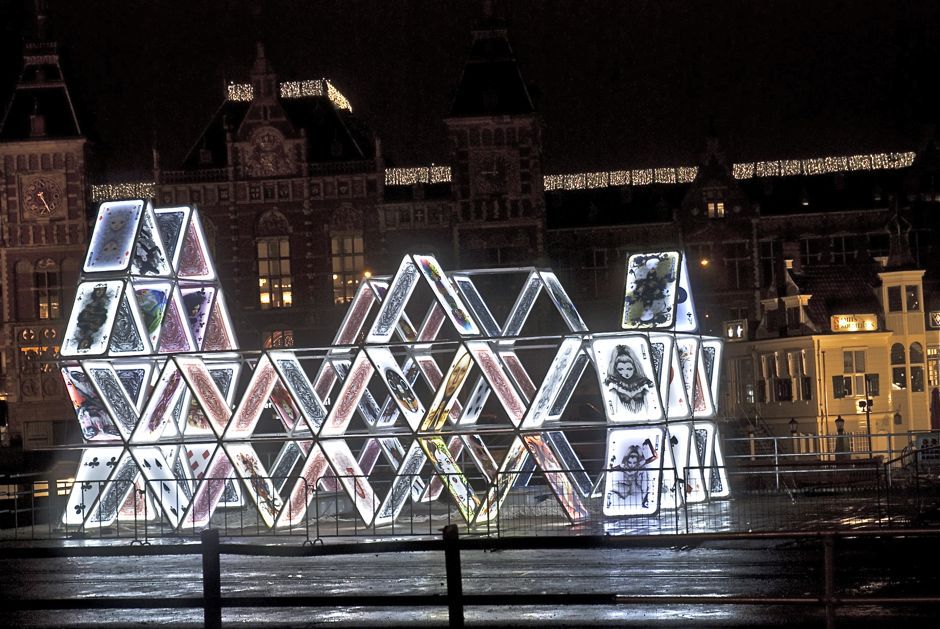 Tulip Mania! stands out the most and it needs the audience’ interaction for it to come alive. On the bridge there are bicycle pumps for you to use. Once you use them, tulips will rise up from the water.

Lightbridge is an installation that reacts to movement from the streets and water. The Sphere of Amsterdam, as created by HVA students, shows the mood and emotions of Amsterdam through internet and mobile data. From a distance the installation Intrepid,

The Paper Boat looks like an origami paper boat. Instead of sinking, it is floating and quietly settled in between the real Amsterdam harbor boats. If you are out with your camera, Effervescence is the most photogenic installation. Is it a champagne bubble bath or flying objects or soap bubbles… It makes Herengracht very magical.

The Illuminade route will go live on 11th December. For this it is all about giving young talent the chance to be part of an international acclaimed festival. 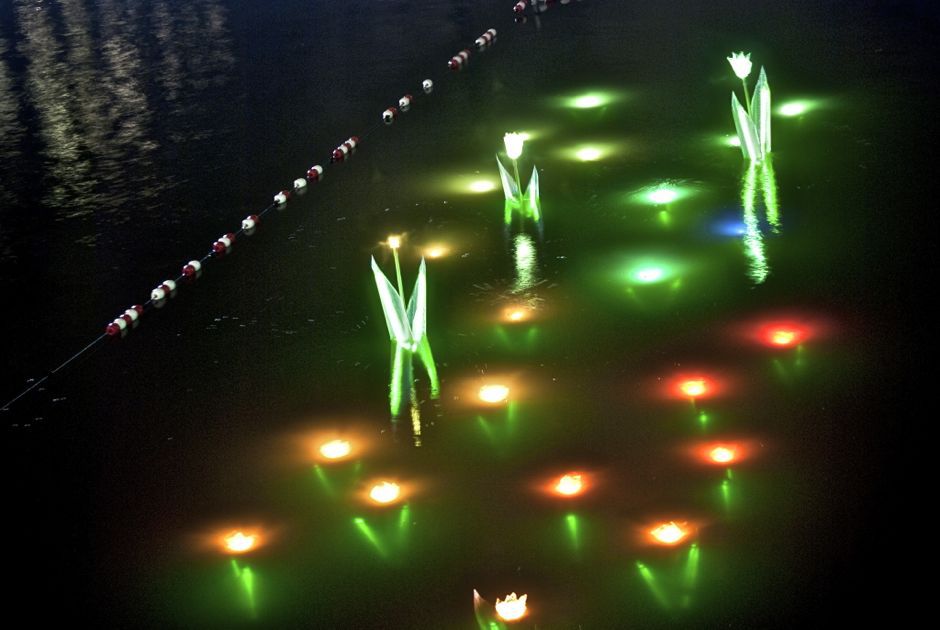 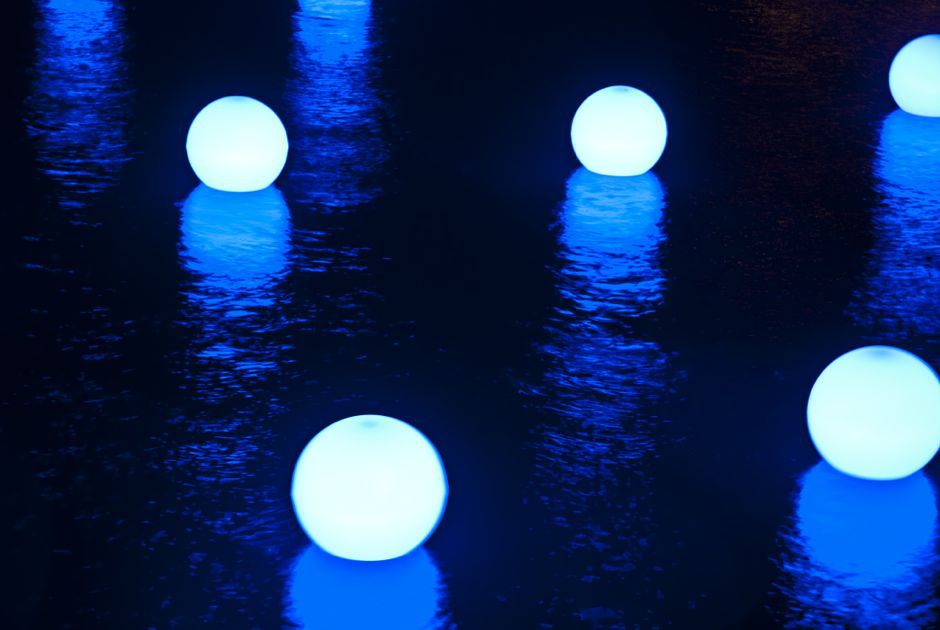 Oh, don’t forget to tag your tweets and Instagram photo’s with #amsterdamlight, as it could be part of one of the installations. And ofcourse use the #acitymadebypeople so we can feature them as well. Enjoy!