In Bucharest we have an upcycling center where you can observe, learn about and do your own art products from thrown away material.

I always thought that turning garbage into something beautiful is the job of that chubby Godmother from Cinderella. Turns out that is not the case. She has nothing to do with it, at least not here, in Bucharest. Here, we have The Sustainable Development Center and it’s pretty cool.

One of the founders is Irina Breniuc, an environmental journalist. It began with 'Pimp the Garbage', her own project she started with a bunch of friends, making tire couches. Because of all this waste in the world, they felt they had to do something useful with it. Starting with tire couches she moved to creating jewelry, then textile products and decorative wonders until she realized she needed to expand. 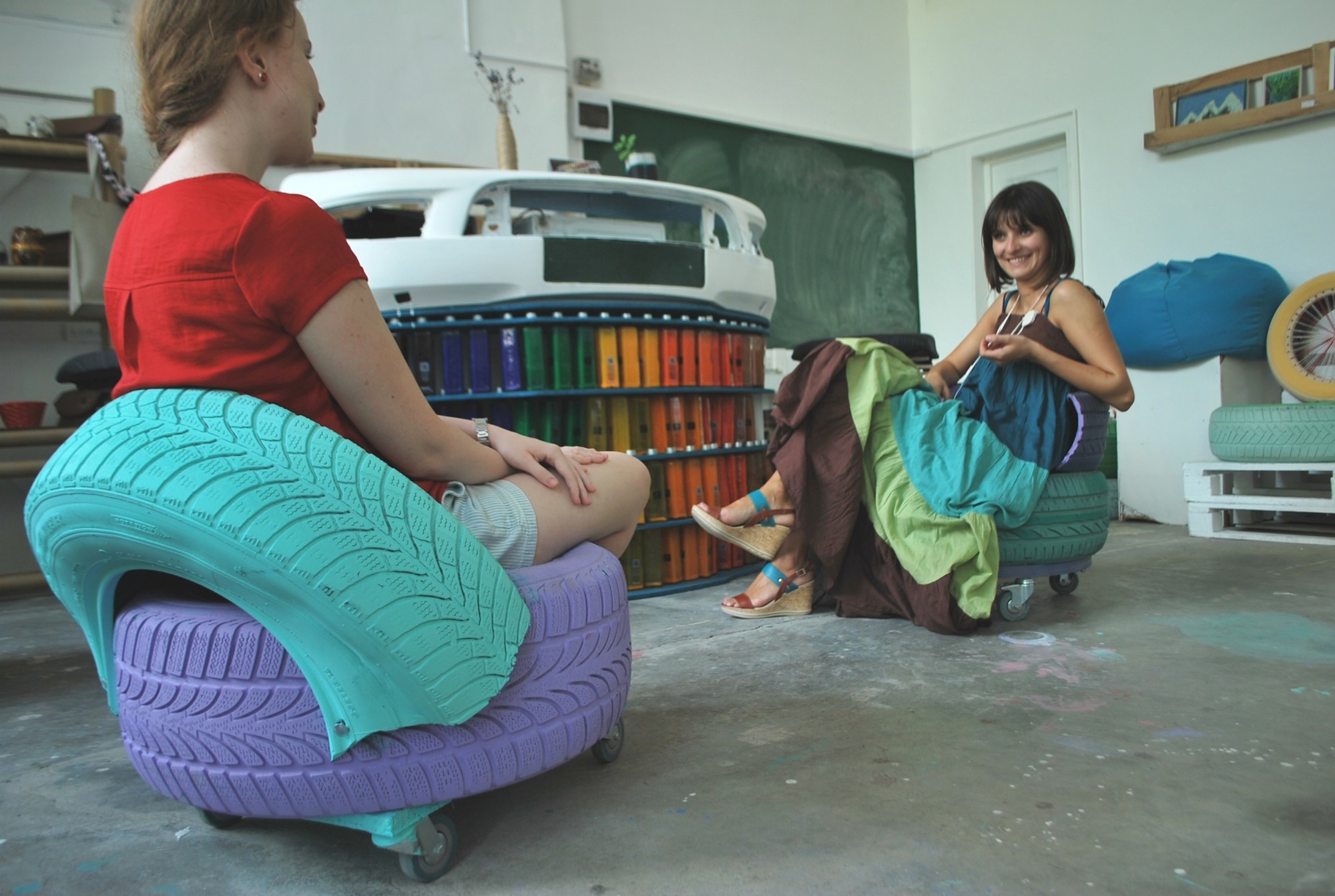 How was the Sustainable Development Center created?

Ecoteca, the association who manages the center together with my association, has been having discussions with the managers within The Faculty of Chemistry since February 2015. We started building up the Center in October 2015, after we had won a grant from Porsche Romania. However, we officially launched the center on June 4th, 2016.

It is devided into two parts – a storage room full of pallets where we keep the products we work with and the debate room where we have playful and colorful furniture in order to inspire people during workshops to talk and get involved. It’s made mostly from recycled objects. 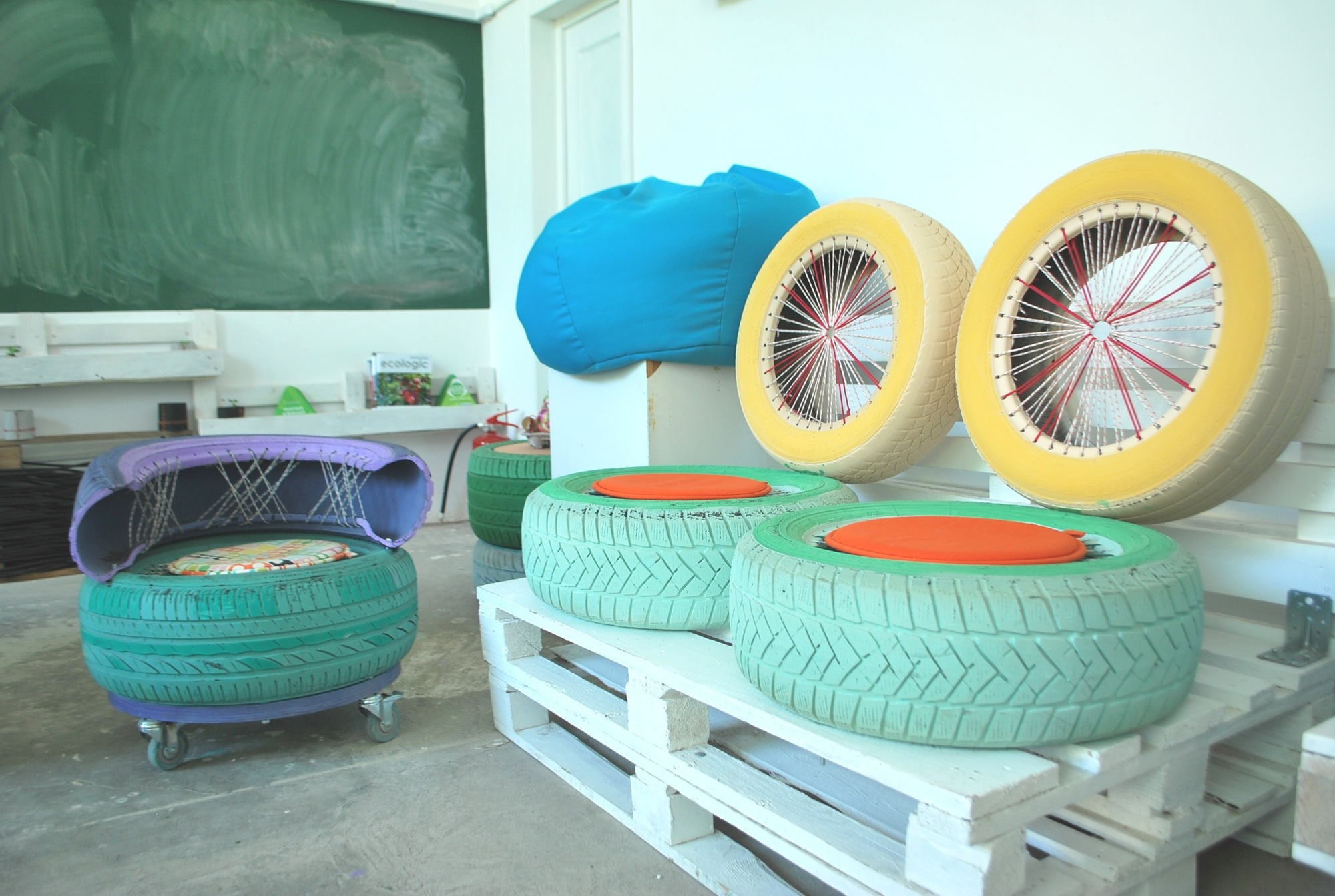 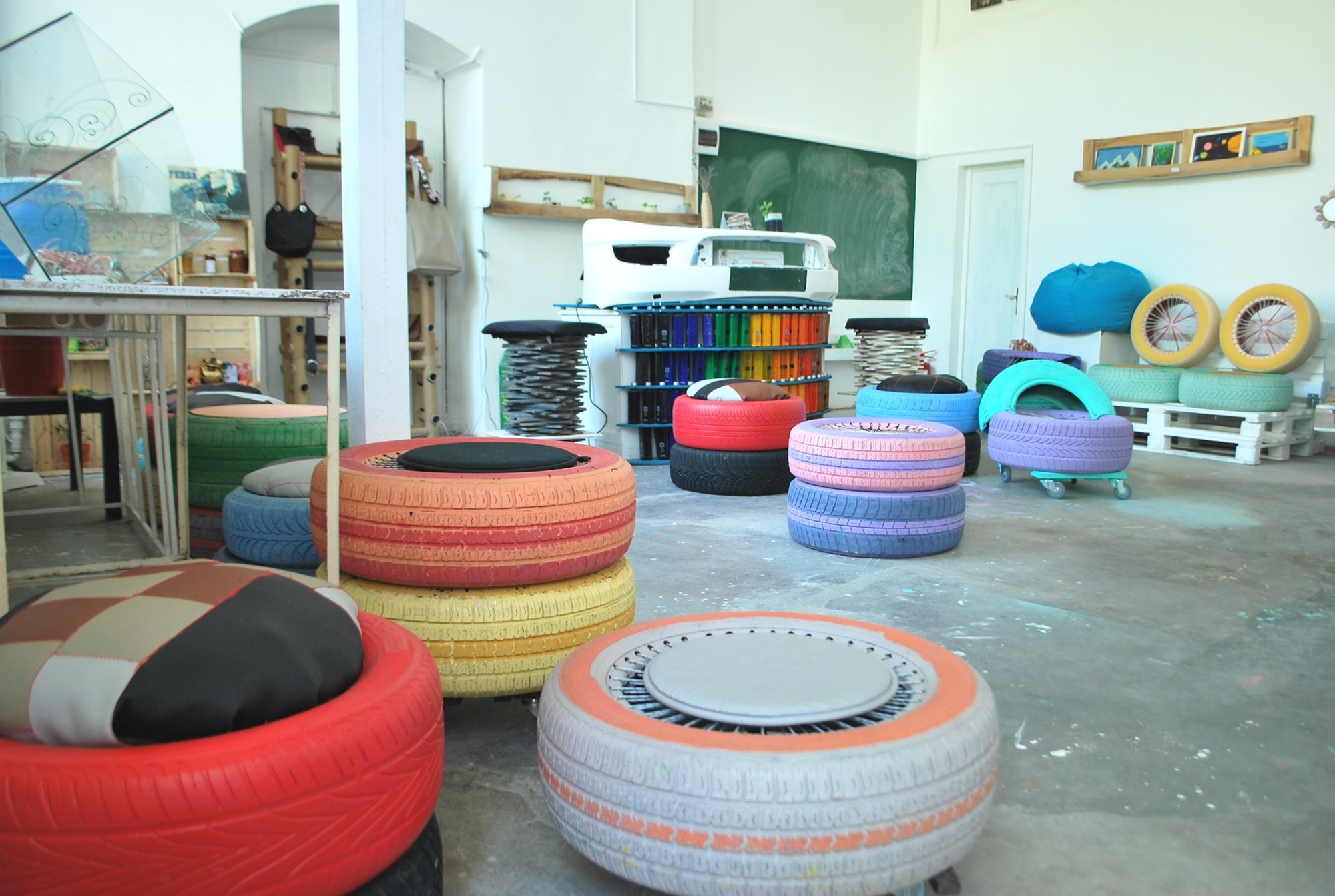 Tell me about the workshops in Bucharest.

The workshops were initially dedicated to the students of the campus and started in January, after the renovation ended. But it’s now open for everyone. Especially waste management, art and architecture students who come here and borrow our tools during their stay. So our workshops are less focused on technical details but more on artsy goals. We make textile products, tire couches, bars from used car parts, bar chairs from tiles and jewelry.

For me, the most successful workshop was one which had the most surprising visible results – the pallets closet. We made it within a day and it’s full of raw material. 7 people made it. But from an awareness point of view, the textile recycling workshop was the most wanted. It also got radio attention, which we had no idea about. 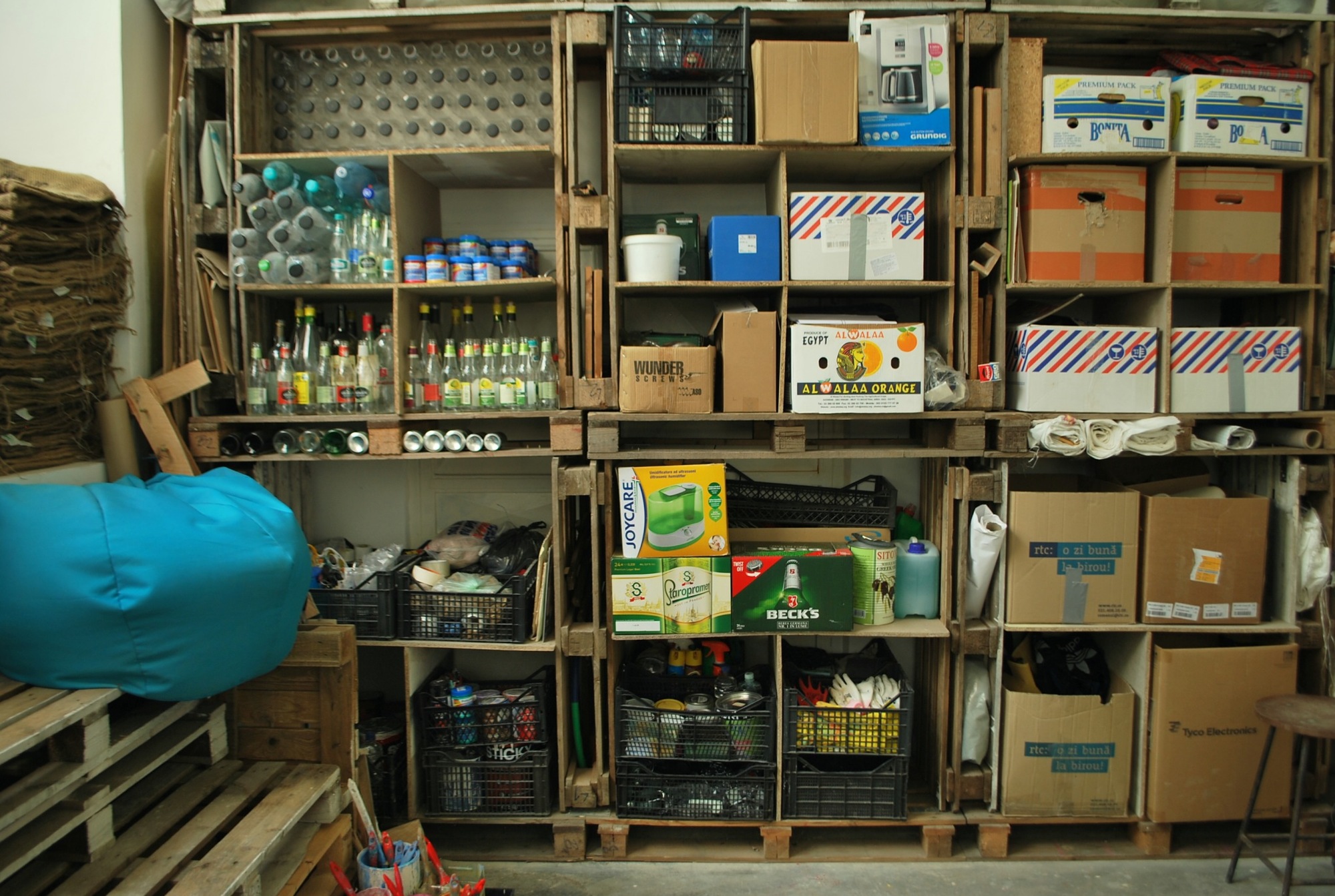 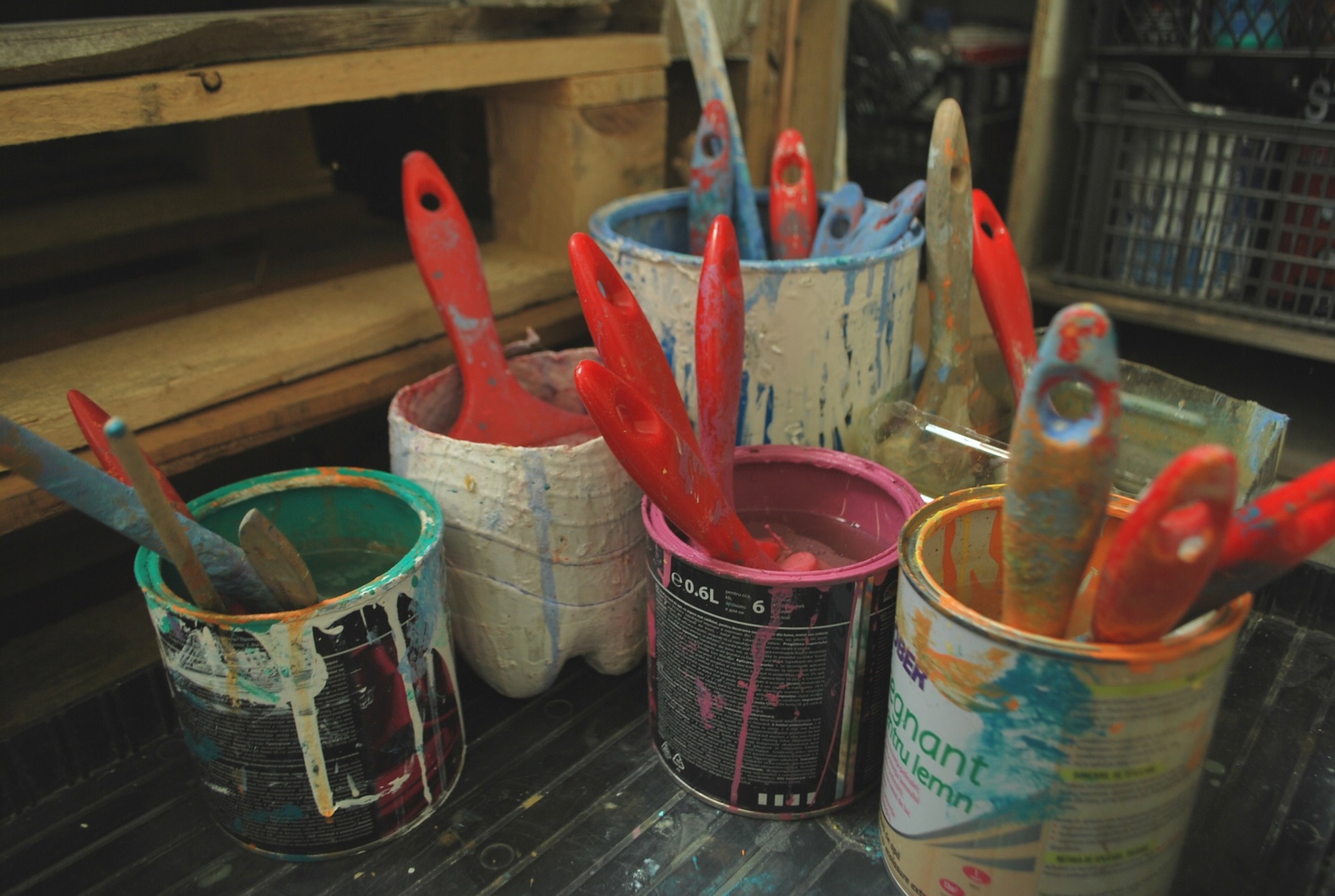 How do you make these products? Let’s take my favorite – the tire couch.

Usually, more than one person works on it. It starts with cutting the tire and it takes an hour. After that you have to wash and drill it. You then sew the parts and paint it. Painting can take up to an hour because you have to mix the colors. We have to mix them in order to get all these shades and yet, we can’t obtain very bright colors. We can make a couch during a workshop because people work simultaneously.


"Take for example, a bottle. You don’t buy it for the bottle; you buy it for what’s in it. It might be that the bottle is more expensive to produce than the content in it. And sometimes, alternatives are cheaper for the company and safer for the planet."

What are your plans with The Sustainable Development Center in Bucharest?

What we want to achieve with this center is to show that you can make cool products out of things people throw away. It’s the whole idea of upcycling. So we’re planning to educate them and show them there is an alternative to throwing garbage at the landfill. At the same time, Ecoteca, as a specialist in waste management, will continue to share its technical expertise with students. And, together, we want to offer companies the knowledge and resources that are needed to manage their waste.

The education process doesn’t include only people, but companies, because they have to learn how to pack their products in an environmental-friendly way. Take for example, a bottle. You don’t buy it for the bottle; you buy it for what’s in it. It might be that the bottle is more expensive to produce than the content in it. And sometimes, alternatives are cheaper for the company and safer for the planet.

Our second goal is to teach people to consume only what they need and reduce wastage and use as less packaging as possible. Another goal is to teach them to select their garbage so it could be recycled. 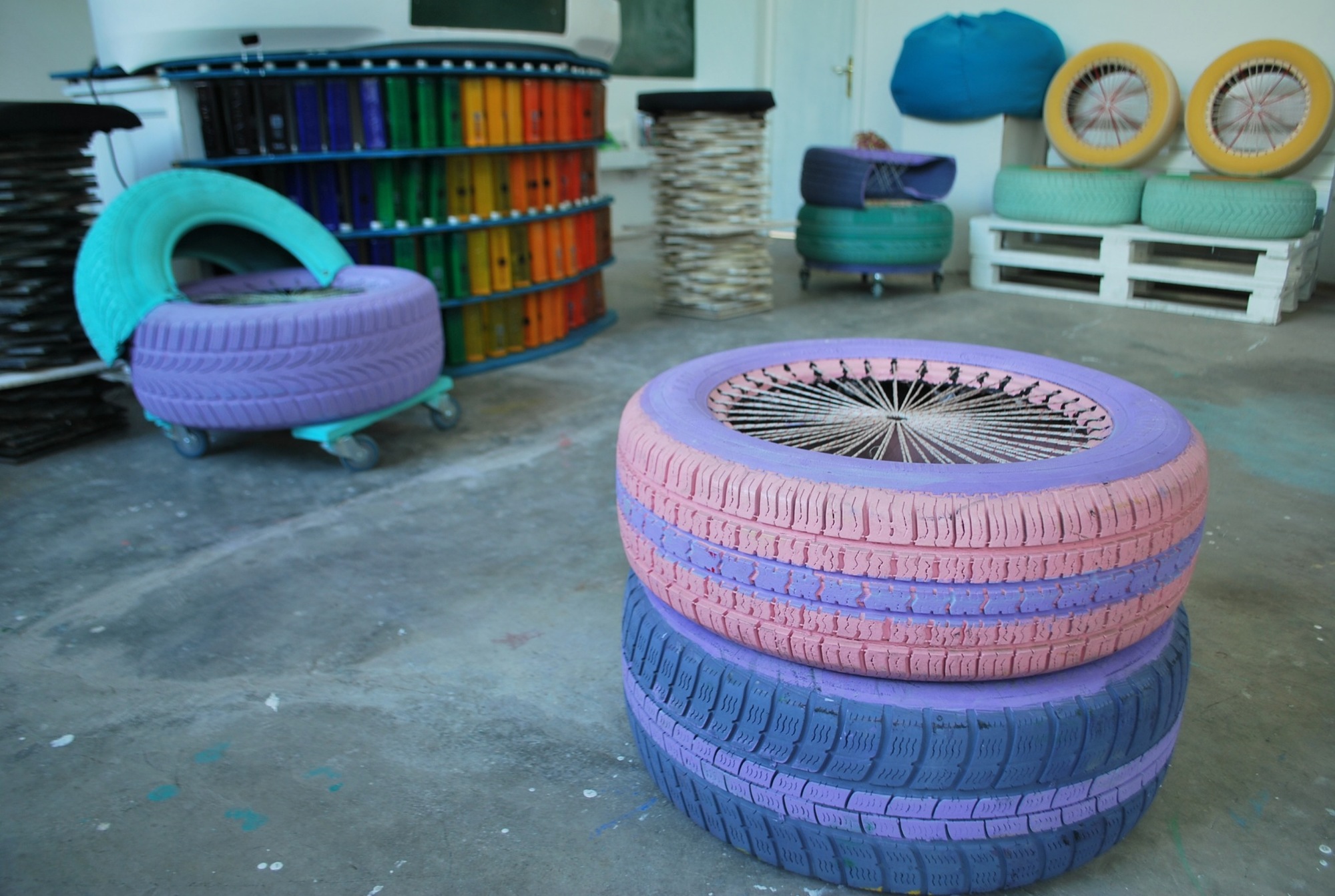 As I wrapped-up the interview, I took another glance.... and I made a promise: as soon as I'll have my own garden, I'll put a wonderful tire couch in the middle of it. And until then, no buying more than I can eat and no throwing away the beer bottles. Great champagne glasses can be made out of them!