Footy and live music, could it get any more Melbourne? The Reclink Community Cup 2017

This annual event for charity features live bands and a game of footy played by those within the Melbourne music scene: The Reclink Community Cup 2017.

Throw in some cheap craft beer, food trucks, and some temperamental weather and you’ve got a classic day of entertainment. 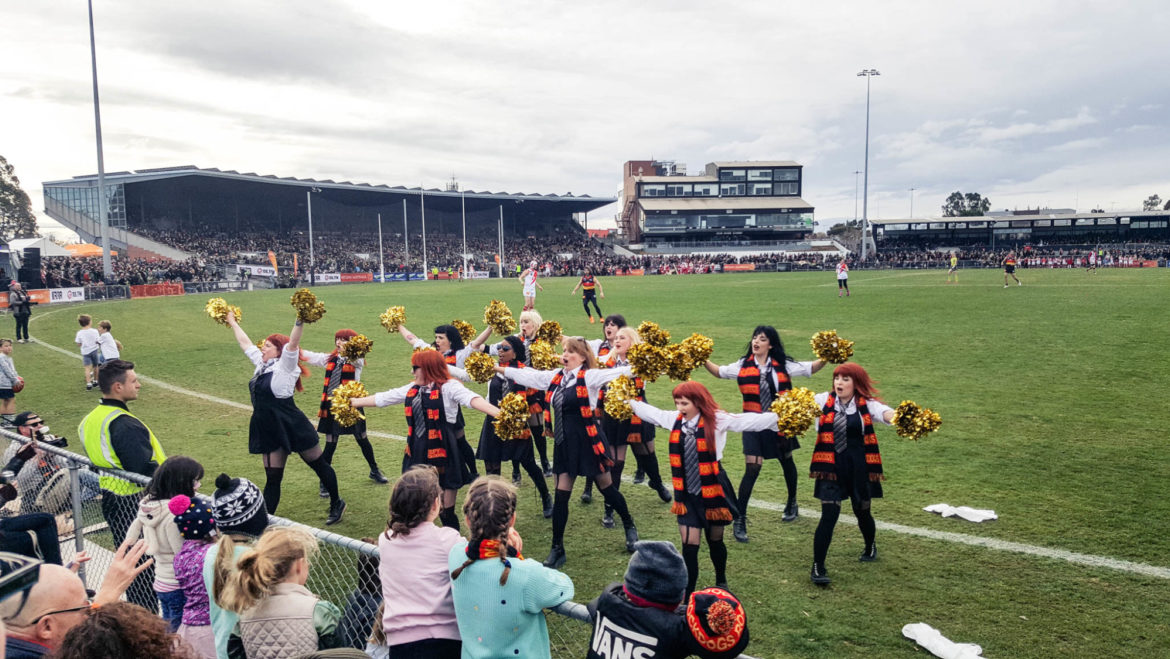 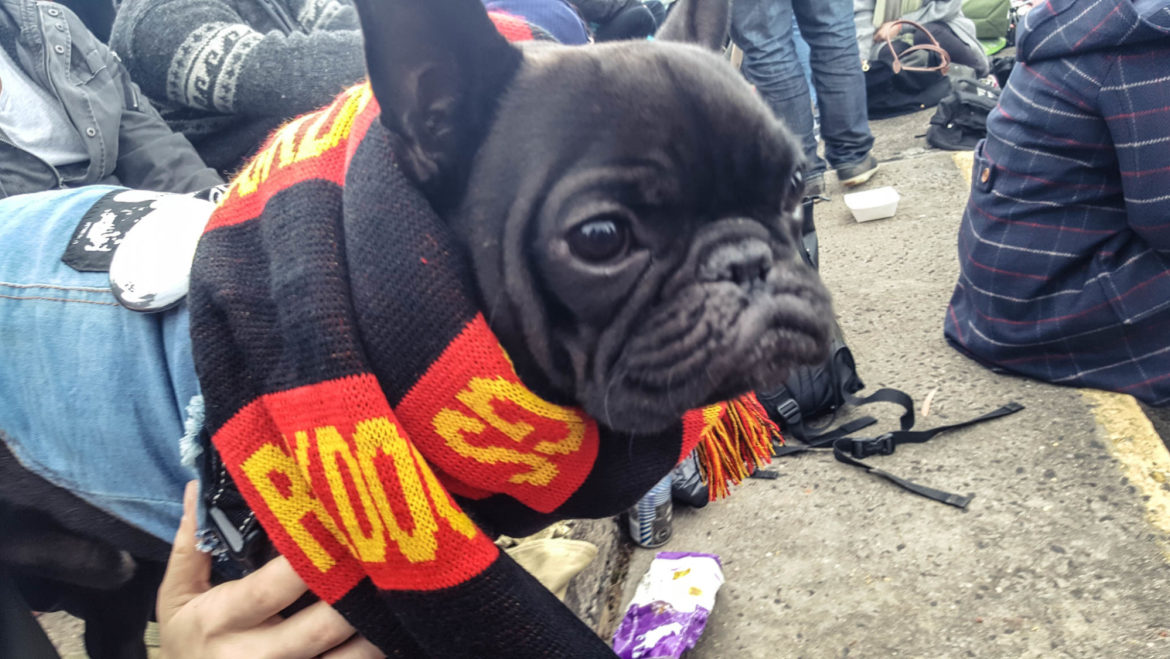 These players are not your usual athletes – though they certainly prove their strength in representing what is an incredible music scene in Melbourne. Bound together in the name of rock once a year to play a game of Australian Football for The Reclink Community Cup.

Playing for The Rockdogs – musicians and band members, much more used to late nights and playing to sweaty audiences rather than sweating a whole lot themselves. However, spare a thought for The Megahertz who compile of community radio DJ’s from PBS and Triple R, with only one win since the cup began in the early 90’s.  Originally a social event for Melbourne rock venues, it has now become a lot bigger, attracting over 10,000 people (and their dogs) who brave the Melbourne winter for a great family friendly day out. Not to be confused with the hugely popular AFL league, today’s game is “Footy” otherwise known as “Aussie Rules”.

“Indigenous Australians invented Aussie rules you know, and we play an adapted version of that. ‘Mangrook’ is the aboriginal name for football - It’s a very Australian thing and Melbourne is the home for it”.

The Rockdogs captain Nick Cooper from the band My Dynamite explains “Indigenous Australians invented Aussie rules you know, and we play an adapted version of that. ‘Mangrook’ is the aboriginal name for football - It’s a very Australian thing and Melbourne is the home for it”. 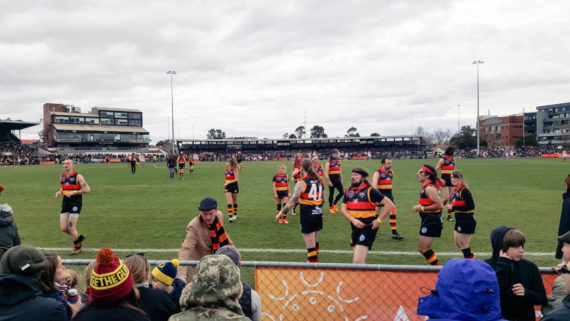 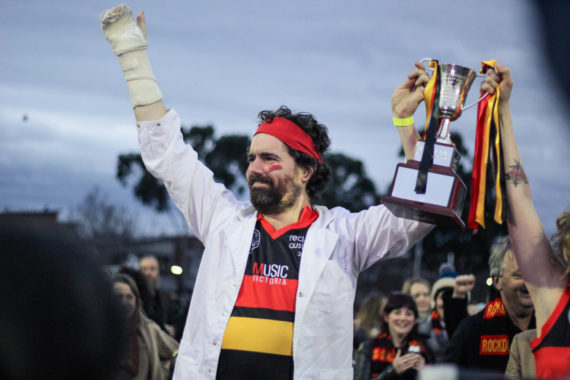 The game is actually the backdrop today though, the real reason he has been involved for the last nine years is “It’s passionate, grassroots, community. To see amazing bands, average football and smiles on kids’ faces, it’s just beautiful. It’s all for a great cause, Reclink creates 80,000 engagement opportunities for marginalised drug affected, alcohol affected, homeless and geographically isolated people. The programs are really important to bring the community together, they find the medium which is sport and it gives them a reason to show up as a lot of them don’t feel there is a reason to do anything”. 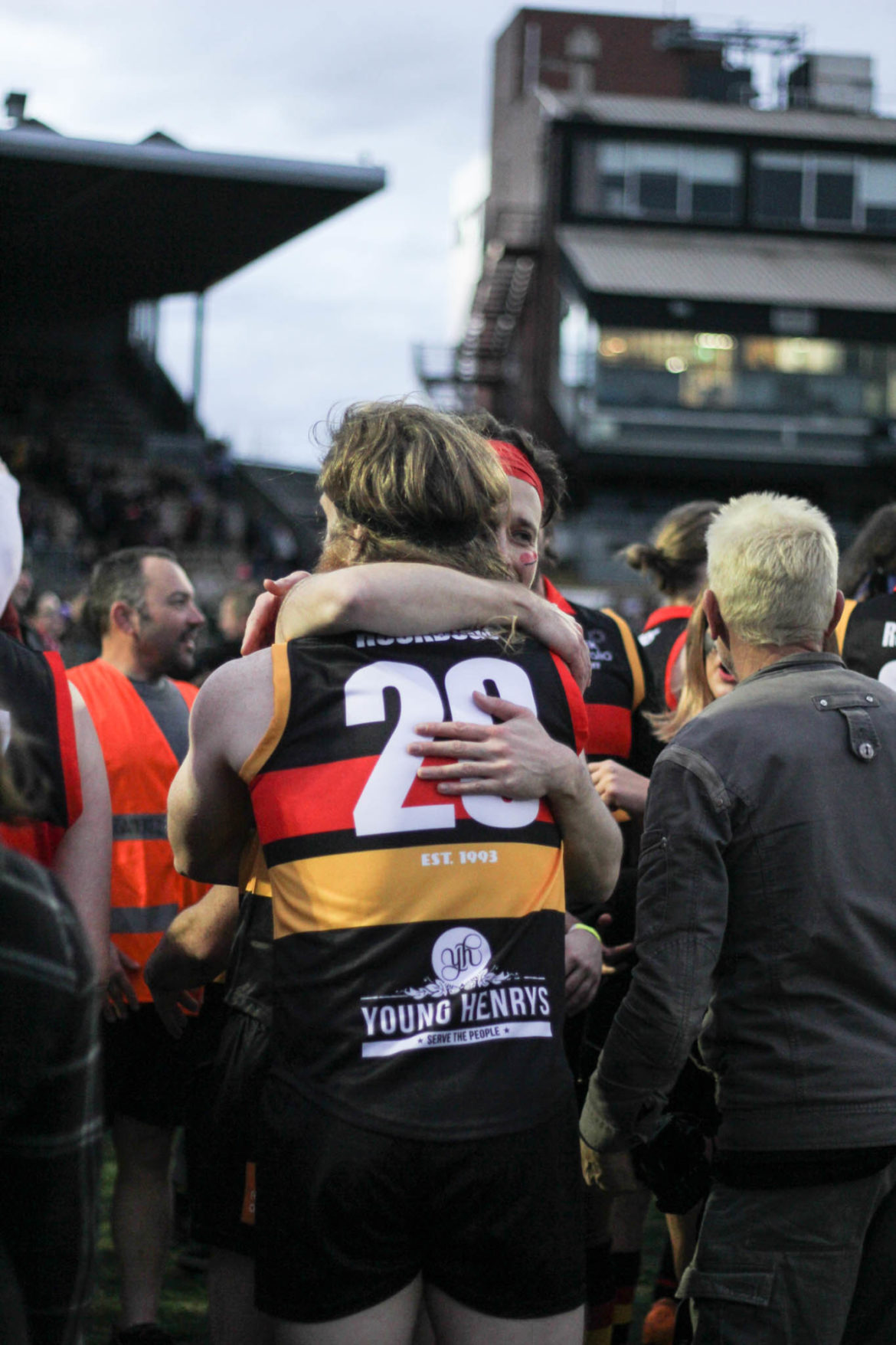 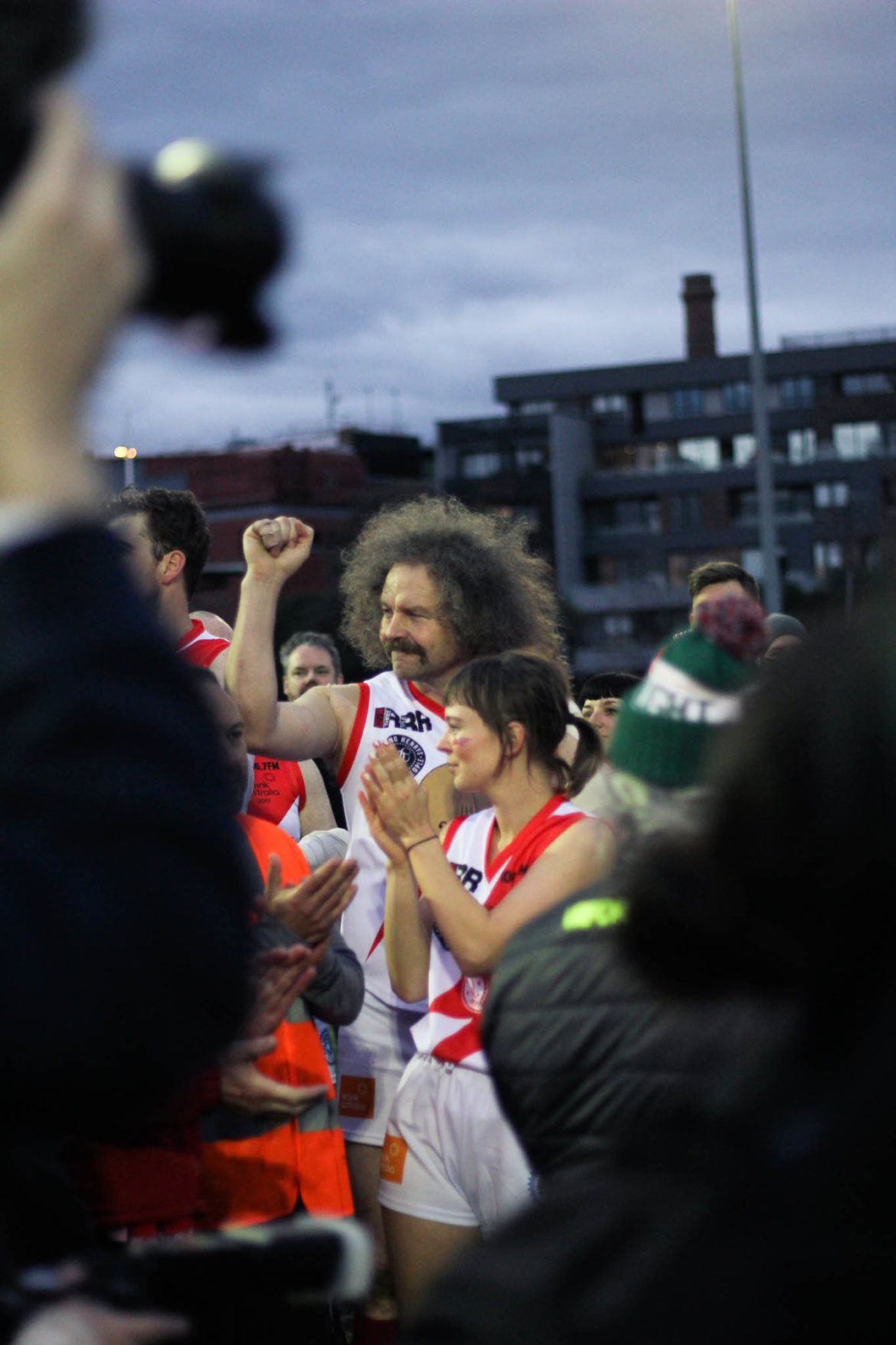 Melbourne, as well as being sport mad, is also home to an incredibly strong music scene and this is helped a long way by local radio, Nick tells me “As far as I know we are the only city in the world that has two strong community radio stations, so it’s an amazing micro-community where that can survive. There is a friendly rivalry between us and The Megahertz, they play our records and sometimes they don’t, but they invite us in for interviews, it’s a great opportunity to cross pollinate, we love them – we are frenemies!”. 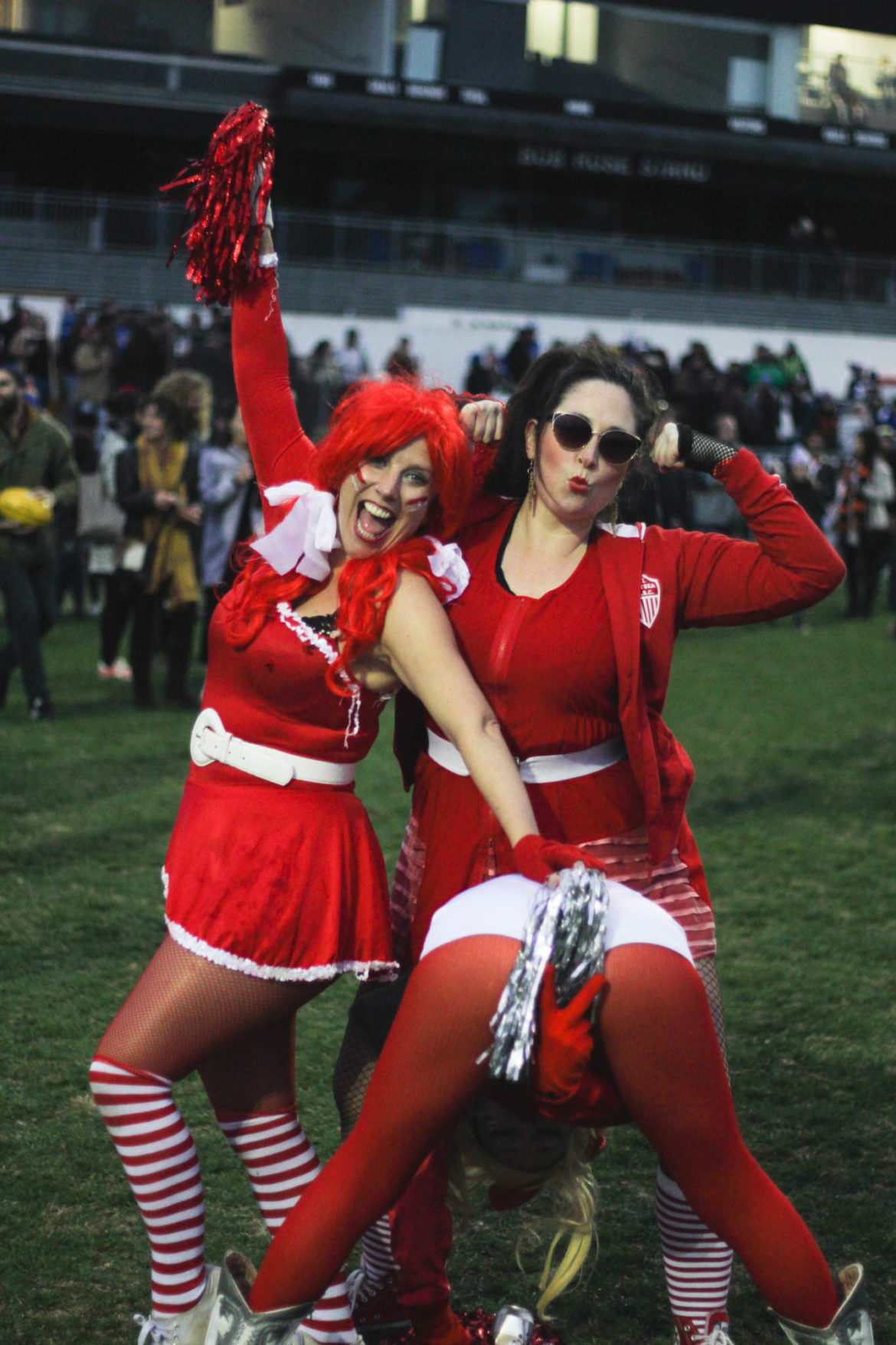 It’s not just the players on the field of course, there are the cheersquads who keep the crowds entertained with outrageous costumes. Jaimie McLean, head of The Rockdogs cheersquad “we are paying homage to Chrissy Amphlett the rock goddess of Australia RIP. I’m here today to support the Melbourne music family, catch up with mates and to listen to some great music”. 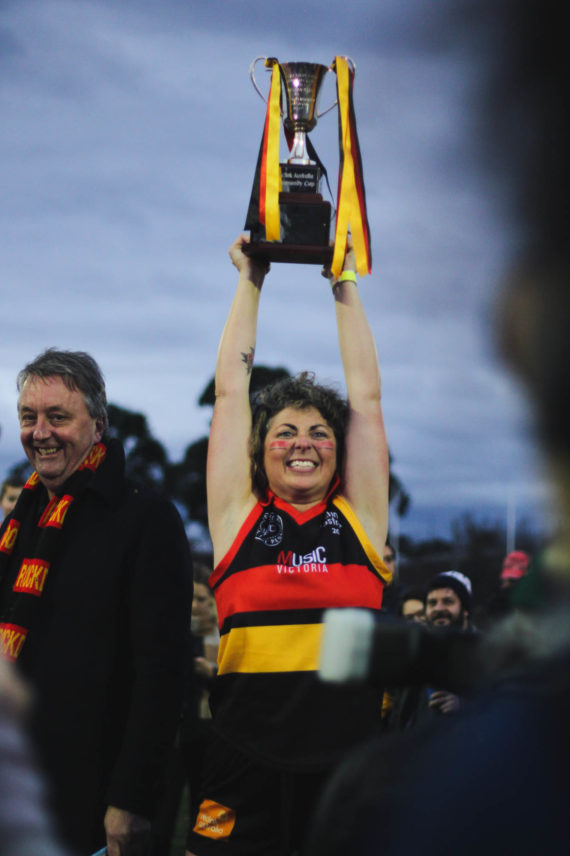 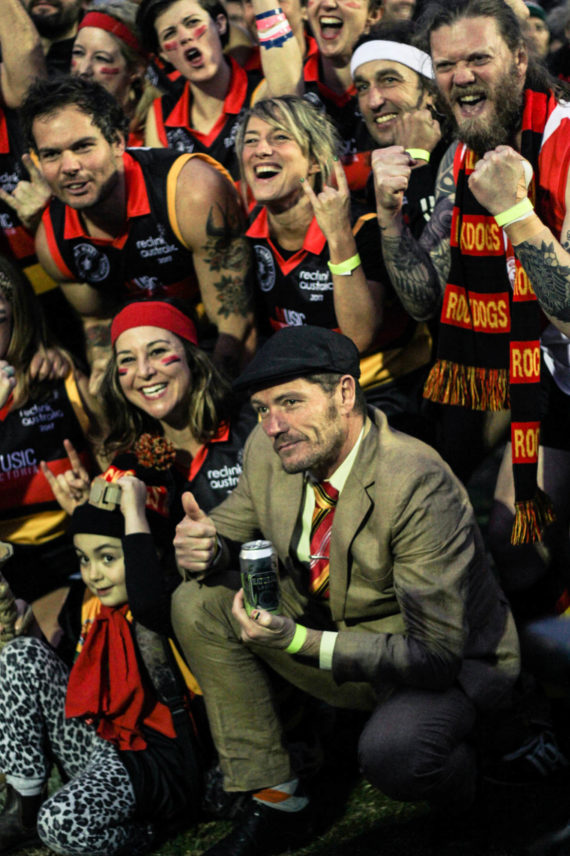 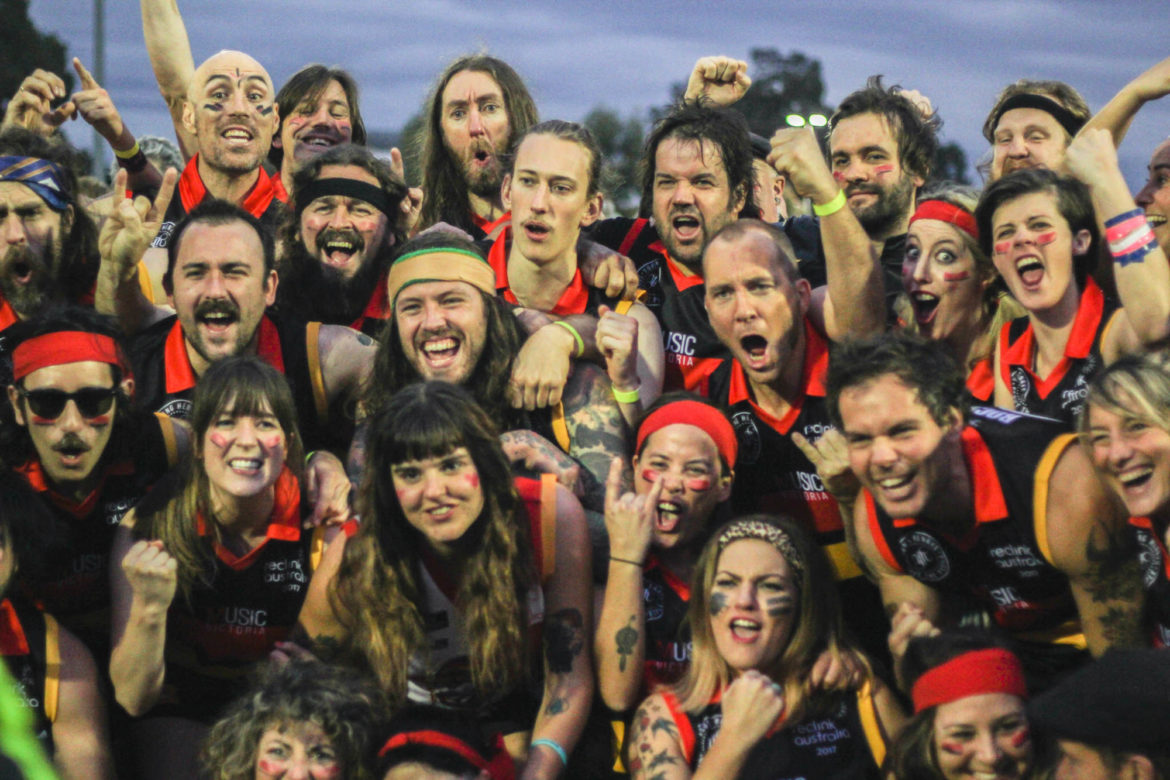 The third quarter of the game saw the first streaker of the day and it didn’t stop there, another 3 followed suit, in their birthday suits. To the dismay of organisers and audience alike, the men are now facing fines and potential criminal records. This the first time in the history of the event this has been the outcome. So in true Australian style, to support these men and raise funds to help pay their fines, the music community has come together with an impressive lineup. Come along on 12th July at The Gasometer Hotel.

Great music indeed, live performances throughout the day from the likes of local favourite Jen Cloher (joined on stage by Courtney Barnett), Remi who brought the funk to half time, punk rockers The Peep Tempel and the iconic Spiderbait featuring Kram who after playing a whole game of footy, then jumped on the drums to play the headline slot. So what’s tougher? I am not sure, but I really wish all football games were this good. Not that it really matters but The Rockdogs won 61 points to 49.

Thanks to all those who spoke to me and to Reclink Australia.