Boa Mistura, a street art group from Madrid is changing the world through Art. Correspondent Marta met one of the members for a story.

One day in Madrid, when the sun started disappearing, when each window slowly started to turn off, and streets started to empty out, a van bursted into the city. Five young men jumped out, fast and precise, and crossroad by crossroad they left a message…

The next morning we all woke up and Madrid was the scene of a restless hunt for poetry on the sidewalks. Then they all just faded. “A demonstration of love from artists and poets, for our beloved Madrid”. We all knew it was going to be a temporary thing, which made it even more special, wanting to find every single verse in every city corner. Because somehow they were made for us citizens, and we all felt part of that poem spread all over town. 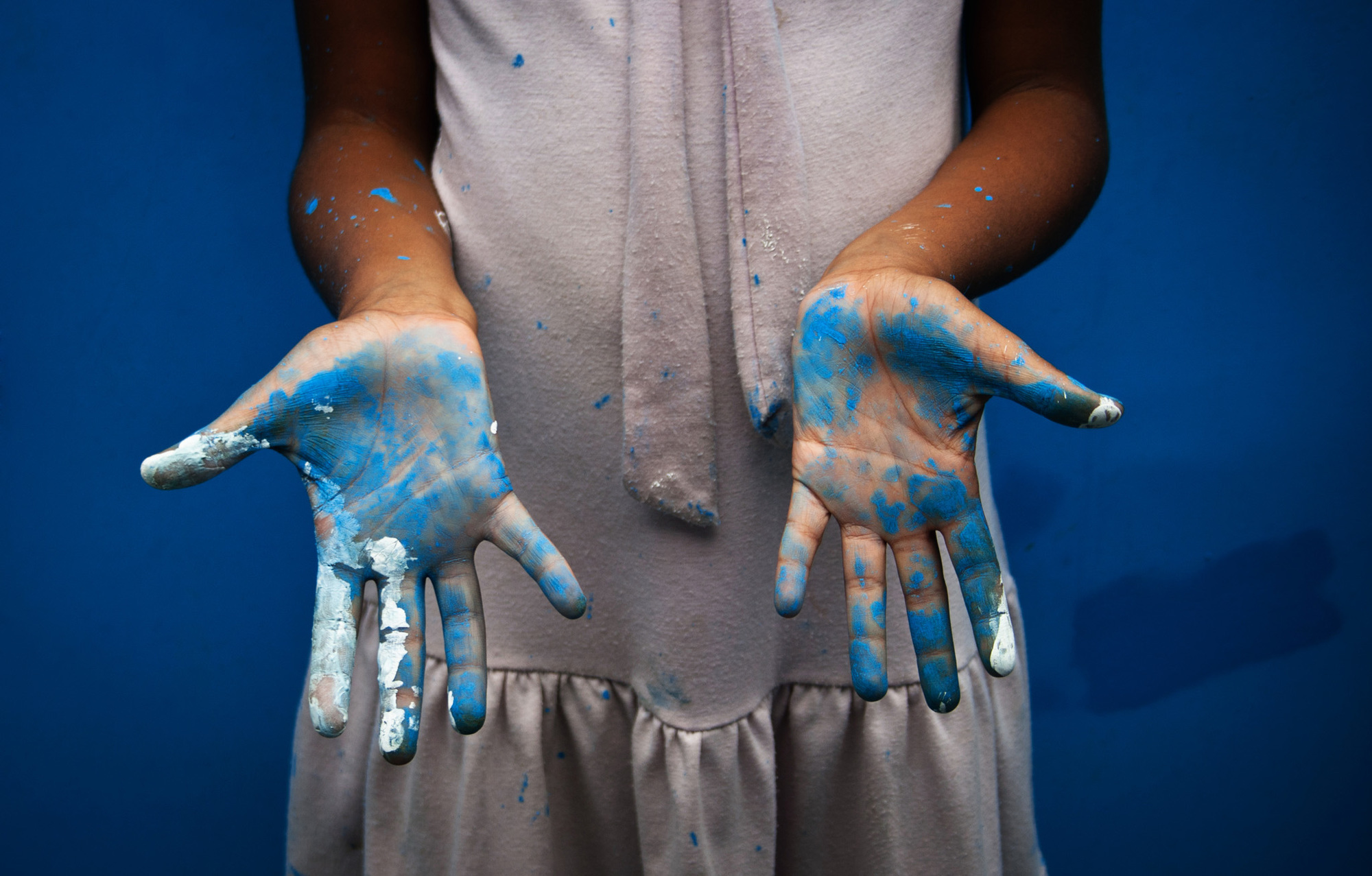 A 'good mix' of ten hands

Hanging from the ceilings, some meters above the ground, or running barefoot with children in the Brazilian slums. Acrobats, activists, artists, but specifically, it's about a group of friends from Madrid: Juan Jaume “Derko”, Pablo Ferreiro “Arkoh”, Javier Serrano “Pahg”, Rubén Martín “RDick”, Pablo Puron “Purone”.

Proud of their origins and their neighborhood on the outskirts of Madrid, Alameda de Osuna, this group has made from their passion their job since 2001. Ten hands, some painting and five minds dedicated to a single reason are what it takes to transform a façade, a building or a whole street.

And most importantly, they're able to touch people’s souls. “Doctors heal your heart, mechanics fix cars and artists touch your hearts”, said Ruben when he spoke for TEDxMadrid. Meet Boa Mistura, not only speaking for Madrid anymore, but for the whole wide world. 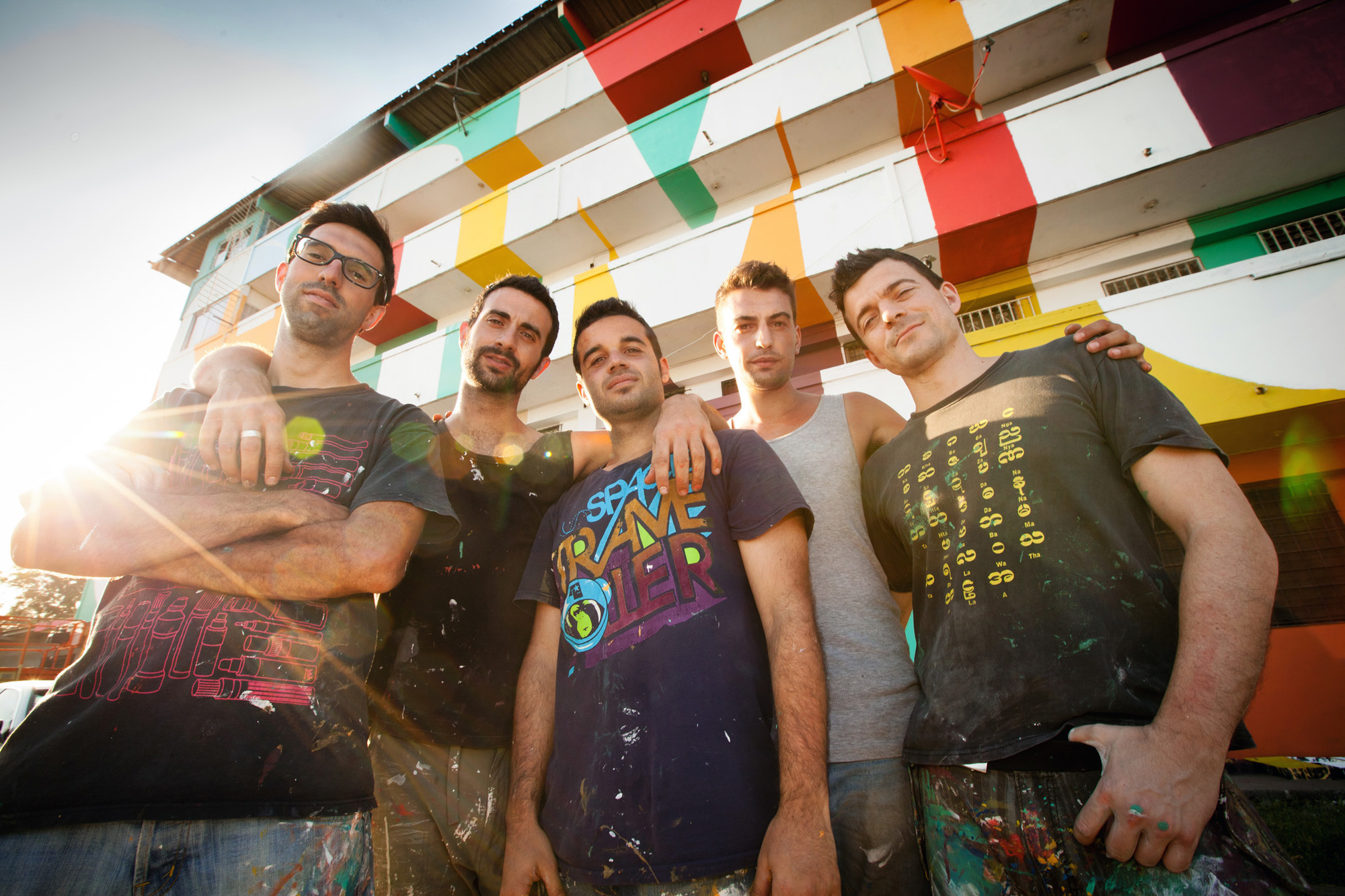 We instantly learned something when we met Boa Mistura at their dazzling studio in the middle of Madrid: that something great can be born only by putting passion and hard work into it.

We talked to Pablo "Arkoh": “At first only we painted graffiti but in the end we started to mix and blend not only on the wall, but with each others knowledge. A civil engineer, an architect, a graphic designer and a publicist came together to make a single move”. Diversity and a clear vision: opening their mind to new ways of working. 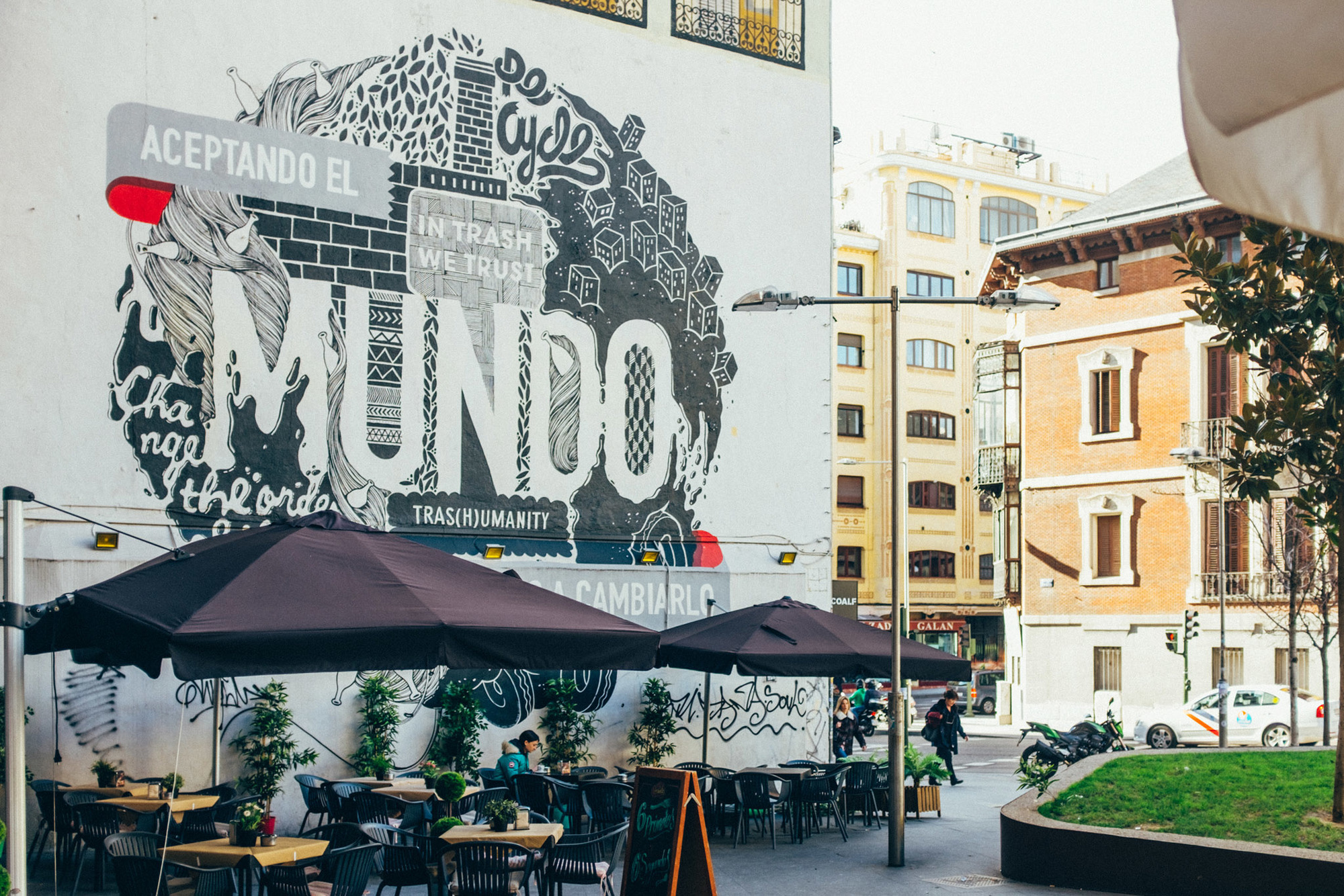 The street is their common language, their roots, and from graffiti they’ve learned how to lose the fear of breaking the rules: “You don’t establish limits yourself ”.

Graffiti and vandalism is a relation that’s often being made, and I guess you’ve discussed this topic many times…

Well, graffiti gave us of "no fear" of breaking the rules and work on the street at first. That’s what we do and what we like: working on the street. What happens is that we work in an opposite direction to graffiti as it is perceived, or as it has been understood for many years.

Vandalism means doing something destructive. And I would say there is a difference from what we do. We paint with a much wider range of communication, we write to the world with messages trying to improve what is out there.

We always ask ourselves: “What we are about to do ,will it make things better?” If the answer is yes then we do it, and if not, we don’t. We care because we know that we are working somewhere that is not ours, it is public space that belongs to everyone.

We have chosen to do something that hooks most people, positive messages, universal values that captivate them. So you manage to connect with a vast majority of people, but we're never going to please everyone. 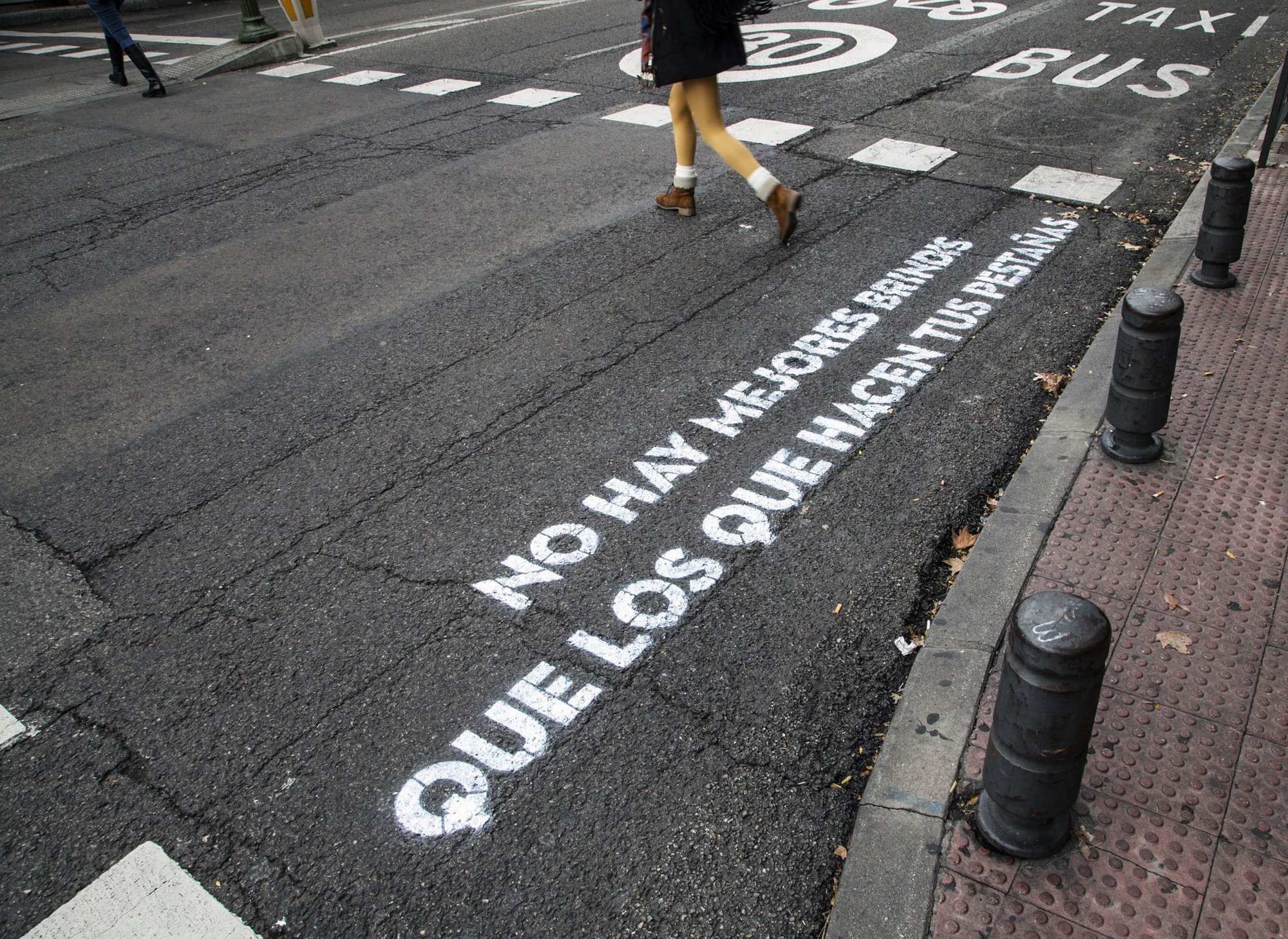 What has been the place where you have found more obstacles when conducting your works of art?

Actually in Madrid. But because we live here. This is where we try to work more, because we love Madrid, but for many years we have been demonized. It is now when this is starting to change, but for a long time we have been persecuted and it has been practically impossible for us to work in Madrid.

Things are starting to change and we are now starting to talk with the city council, which for the moment is at least the willingness to listen. But we believe in what we do and we like to take a gamble.

By the time they had already been painting in places like Berlin and Norway, they changed their path drastically by going to South Africa, where they were invited by an urban art gallery. Something changed the moment they landed.

“For a couple of weeks without knowing what to do, locked, we started walking around the neighborhood, talking to neighbors and children, and suddenly we saw that the neighbors had many things to say and that had to be taken into account.” It was the first project they made in a township – the African slums; that changed their lives since then, along with their way of working. 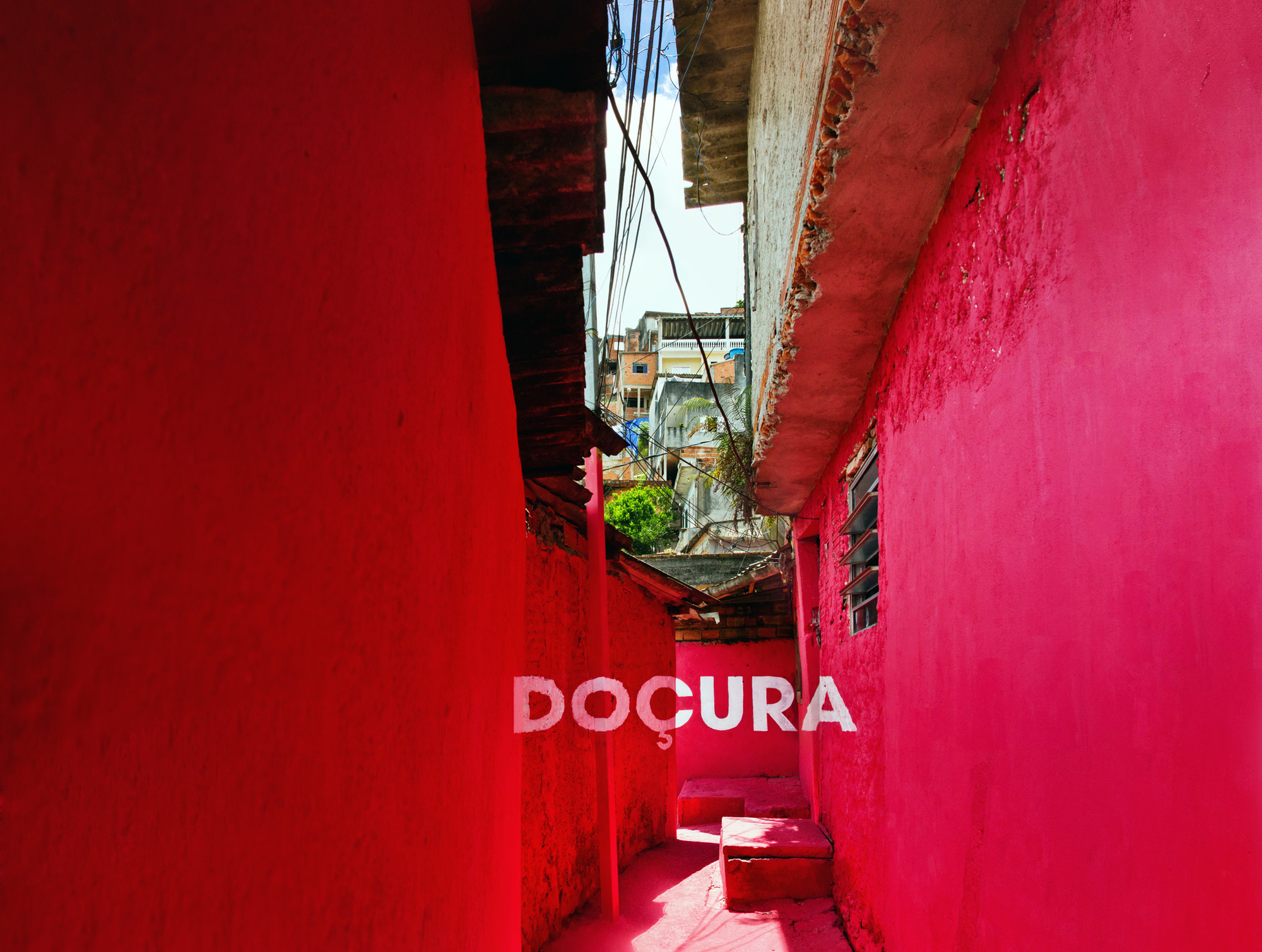 After that São Paulo and Panamá came, leaving a huge footprint behind, and  the project 'Crossroads' was born. “This project is more a philosophy of using art as a tool for change in places where there aren't many resources."

"Where communities are modest and where we really think our work can generate a bigger impact. Because these are places where nobody really wants to invest in, we think there’s an enormous receptivity to any kind of improvement. And in our case, that’s painting.

There are projects that are very special, but maybe São Paulo and South Africa are the ones that have changed us the most as individuals. You change something and you come back home changed, and that change is reflected in the following projects.” 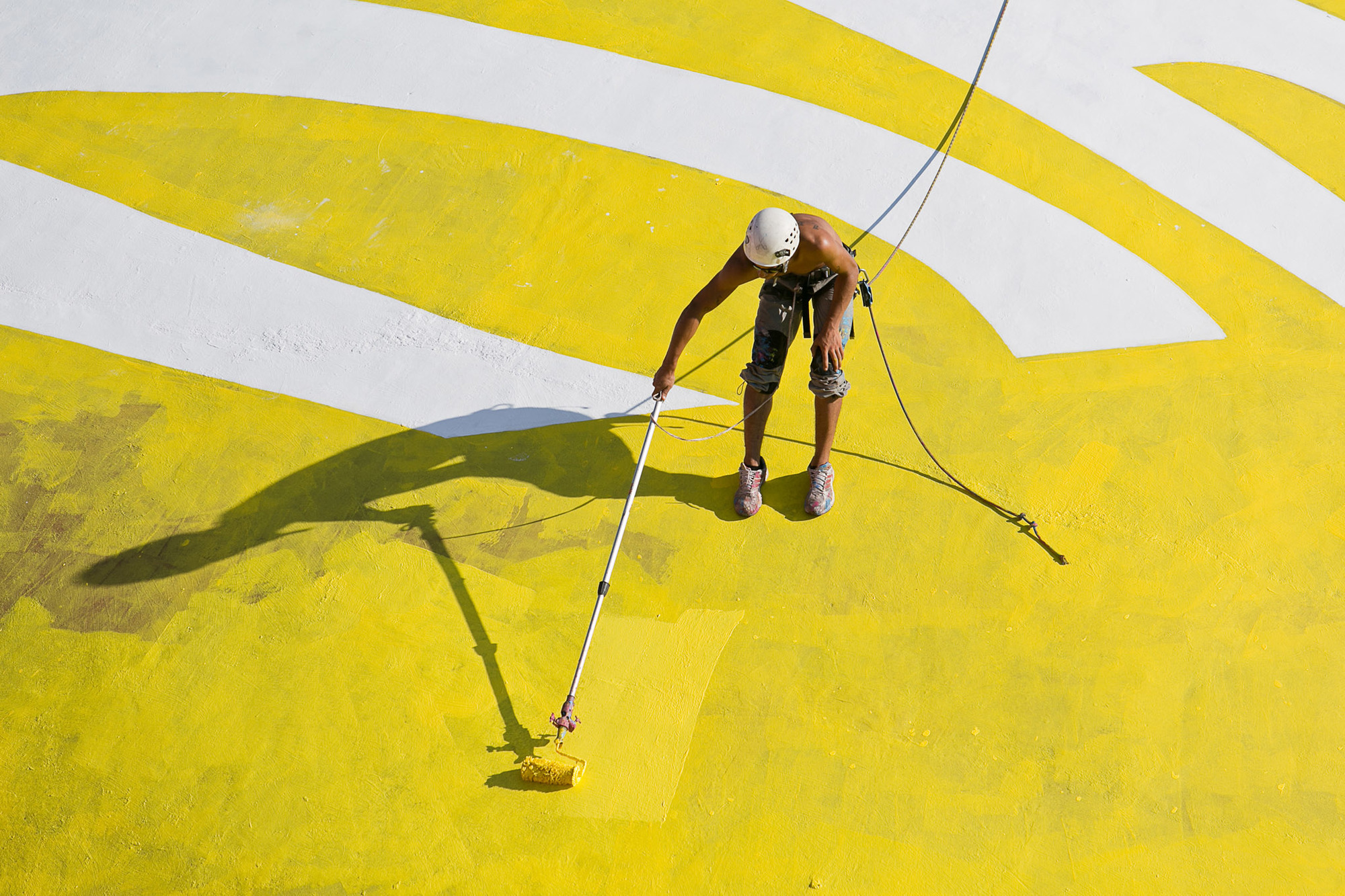 And finally, with the passing of time, and all the places you have seen, all those you have traveled to, would you still choose Madrid as a place to stay in? What does Madrid mean to Boa Mistura?

Yes. Madrid is our home, our roots. As a group we were born here, and that makes it very important. As much as I travel, it is important to always have a place which you can call home. We have a lot of affection for this city, and the more we step outside the more we catch it fonder.

The more you travel, the more you appreciate the good things about your home, and that’s what happens to us with Madrid. Hopefully we will be able do more things here in the future, because we are really looking forward to it. 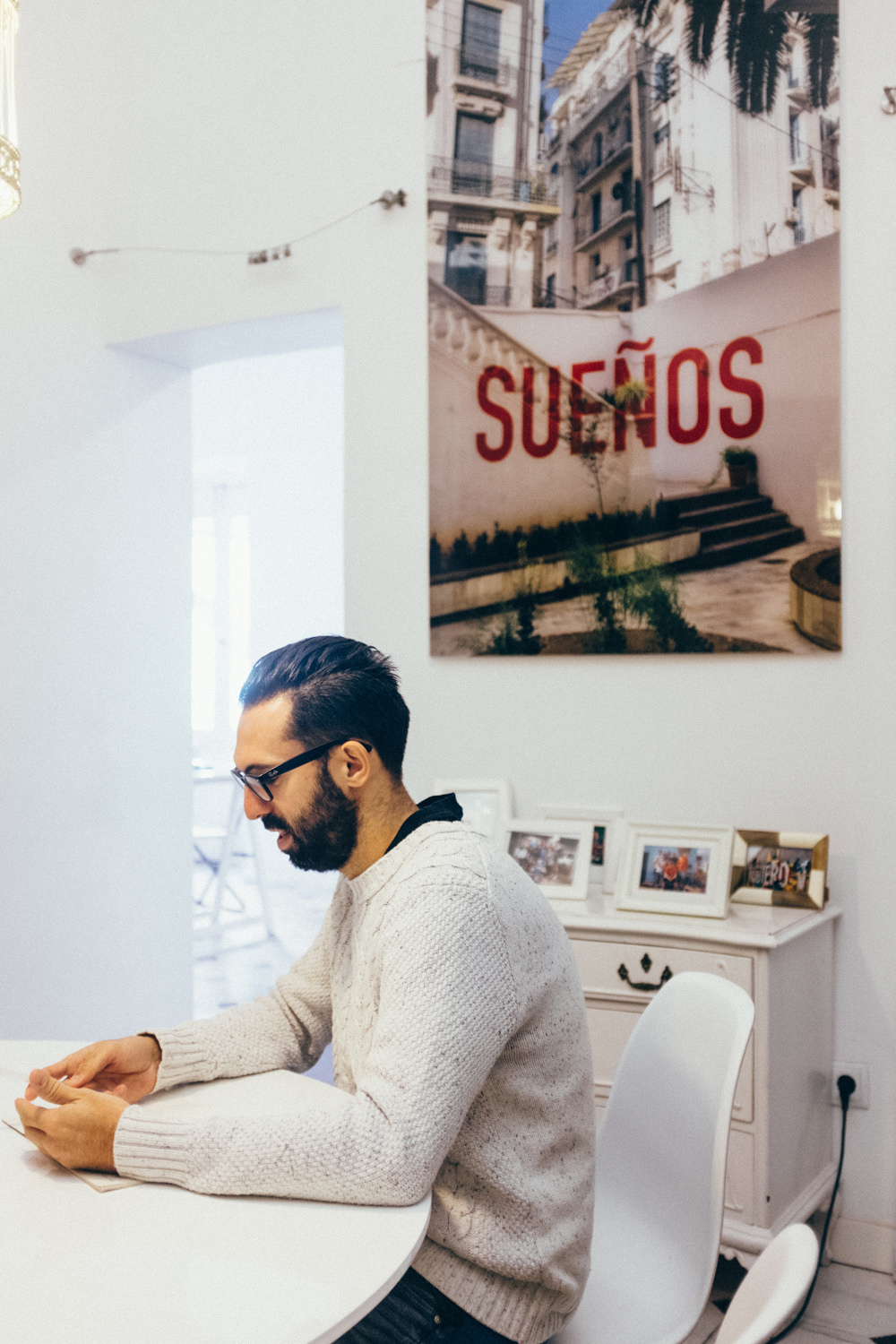 We encourage you to follow their work, and watch what they’ve been undertaking in changing the world through art, because there’s much more to come with these five young men and their team.

So thank you Boa Mistura for opening your doors to us. See you next time, maybe in Madrid or across the ocean, on a façade, a rooftop or who knows what's next!