Our 54th Local Heroes series goes to Mike Nesbit, a native Angeleno visual artist based in Downtown Los Angeles. We think its time to get him to know a little better.

Los Angeles is the creative & cultural capital of the United States (sorry - not sorry - New York). 1 in 6 jobs in Los Angeles County is in the creative sector and the L.A. Region’s creative industry output last year was almost $177 Billion. Of the creative economy, artists across a wide spectrum of disciplines make up a significant portion.

Michael Nesbit is a native Angeleno visual artist based in Downtown L.A. and is also currently a project designer at award winning architecture firm, Morphosis. Along with his current discipline, Michael is exploring areas between art and architecture, with an interest in literal misrepresentation. These particular interests have worked their way into gallery & museum exhibits in L.A. to academic workshops at Tulane University in New Orleans, Louisiana.

Citinerary L.A. sat down with Nesbit and discussed his work and its relation to the City of Angels. 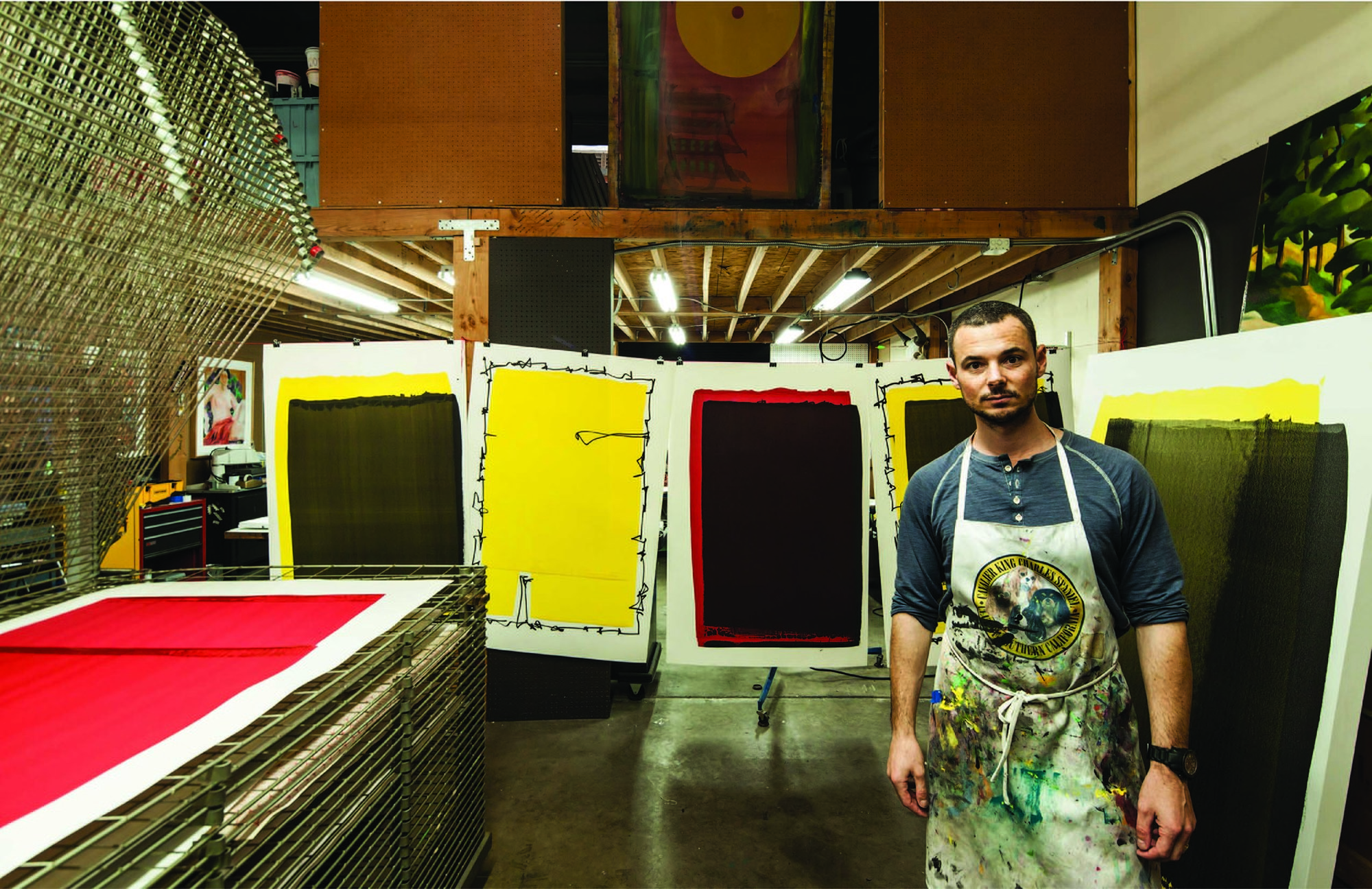 How did you come about becoming an artist? And how did you end up in L.A.?

That's an interesting question because I never thought I would be an artist nor did I have aspirations of being one.  I grew up in L.A. and became an avid baseball player at a young age.  With a lot of hard work I was drafted by the Seattle Mariners in 2002 which began my professional career.  Like most athletic careers, there is a small time frame and I realized right away I needed to find another career/ life path.

That's when I heard about Southern California Institute of Architecture, an architecture school located in an old freight building in Downtown L.A.  After five years of school, I developed a strong interest in representation and technique, which led me to producing artwork right away.

Unlike producing actual buildings, artwork is much more immediate which was a necessity for evolving my own ideas. Around the same time, I started working for Thom Mayne at Morphosis and had the privilege to work in one of the most forward thinking architecture firms in the world.

Due to that, my work is constantly being informed by my experience with building at an architecture scale. Material and Scale have become critical to the work and has become the focal point in my practice.  Circling back to the question about ‘How did you become an artist’ - I guess it started a long time ago because an artist is developed from life experiences and can't be defined by a single moment.  An artist is contextual and constantly being redefined. 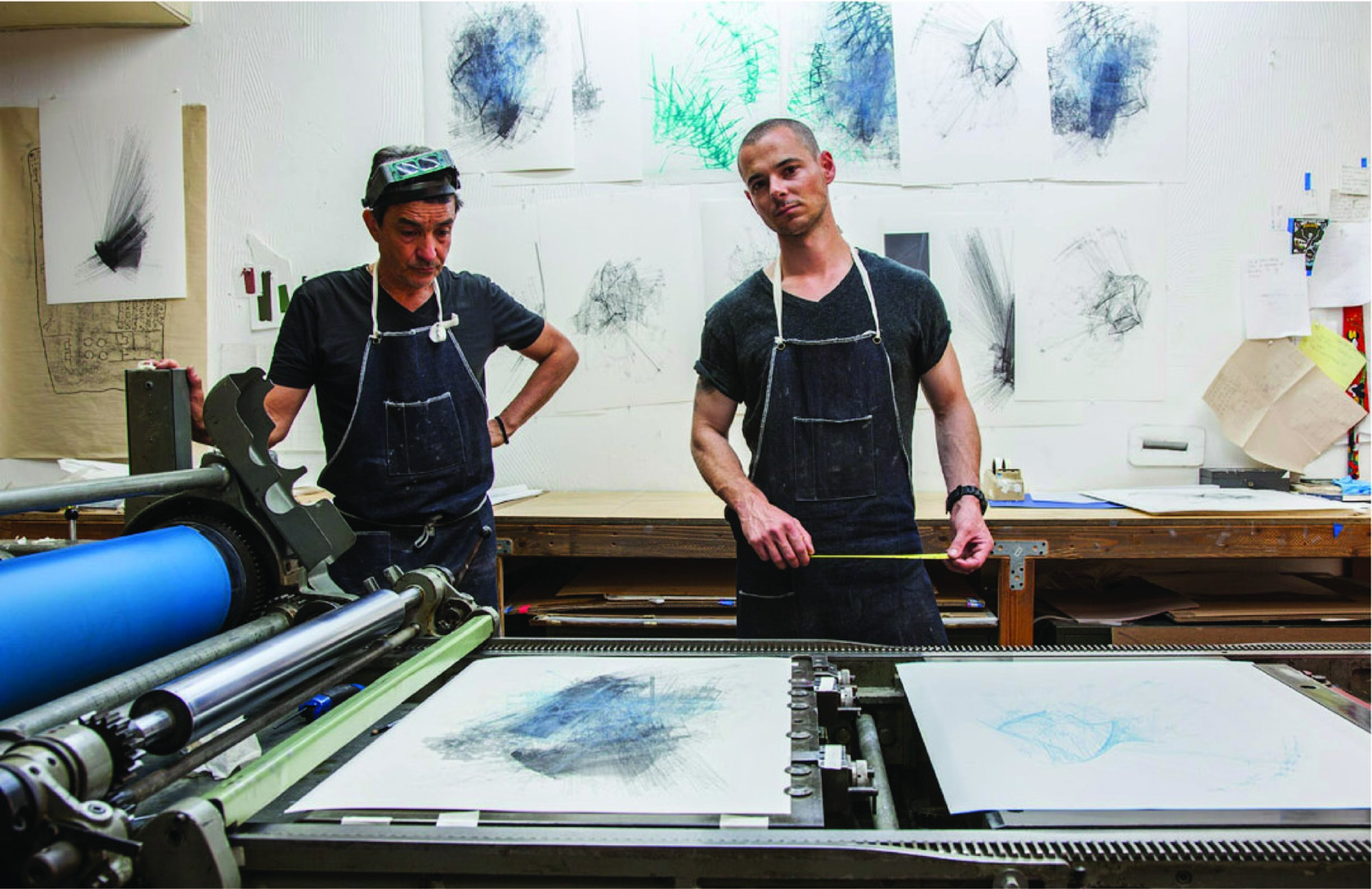 How would you categorize your work? And the intent behind the work your produce?

Abstract Technical, which is a category that I have been developing over the past few years.  Maybe this comes from the practice of Architecture where you are constantly battling analytics vs subjective thinking.  Or from my early discipline in Athletics where practice and repetition allow you to evaluate a certain action and it's direct success.

So when it comes to my artwork, I'm always interested in producing something first (as an action) doing it over and over again as a way to understand the technical application and its direct representation.  For example, the last show "Swipe", a thousand swipes needed to be done in order to know the difference between a good one and a bad one.  Along the way, some mistakes happen like the "swiggle" or the "frottage" and those become opportunities in itself for new techniques in the swipe.

It’s important for me to have a highly organized discipline but at the same time, recognize that the discipline itself is quite ludicrous.  Working through playfulness allows me to recognize the power of mistake.  Most times the mistake become the most critical turning point of the work, as they are only a mistake once after that they become intentional and they are now just another technique of the work. 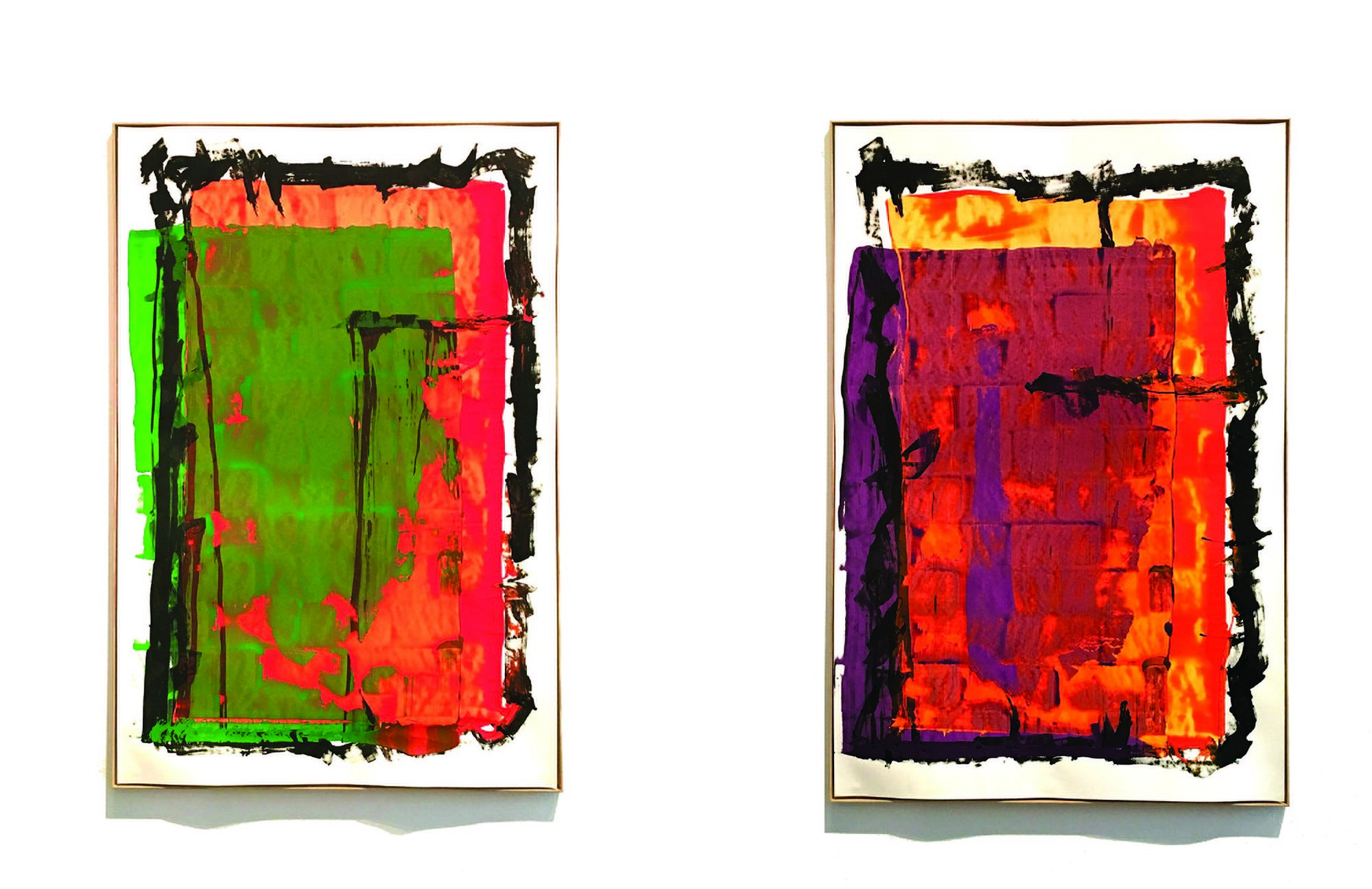 How do you see your work in relation to the greater arts culture in L.A.?

I see my work in a grey area within L.A. Because of its scale and conceptual backdrop, I see it somewhat on its own.  If I could come up with historical precedents, I would bring up Christo, Matta Clark, and Abstract Expressionists like Motherwell, Reinhardt, and Kline. Sterling Ruby and Mary Weatherford are two L.A. artists that I greatly admire.

My work thrives on a building scale.  Buildings are a palette for material exploration and interior spaces are opportunities for generating the sublime and engaging the public.  Scale plays a critical role because it's important for me that people ask questions like how and what.

It's also important for me that viewers understand and engage my work immediately at a conceptual level.

For example, unlike the Phlatness series that was based on complexity for the sake of complexity, Swipe was something I could talk about to my mom (or anyone for that matter) and they could immediately get into the dialogue.  Now, where the work get's complicated is in scale, material, and execution.  So we placed 8' x 10' concrete canvas walls in a space (floating them off the floors) with no means or ability to remove them as a measure to provoke the people that inhabited the space. 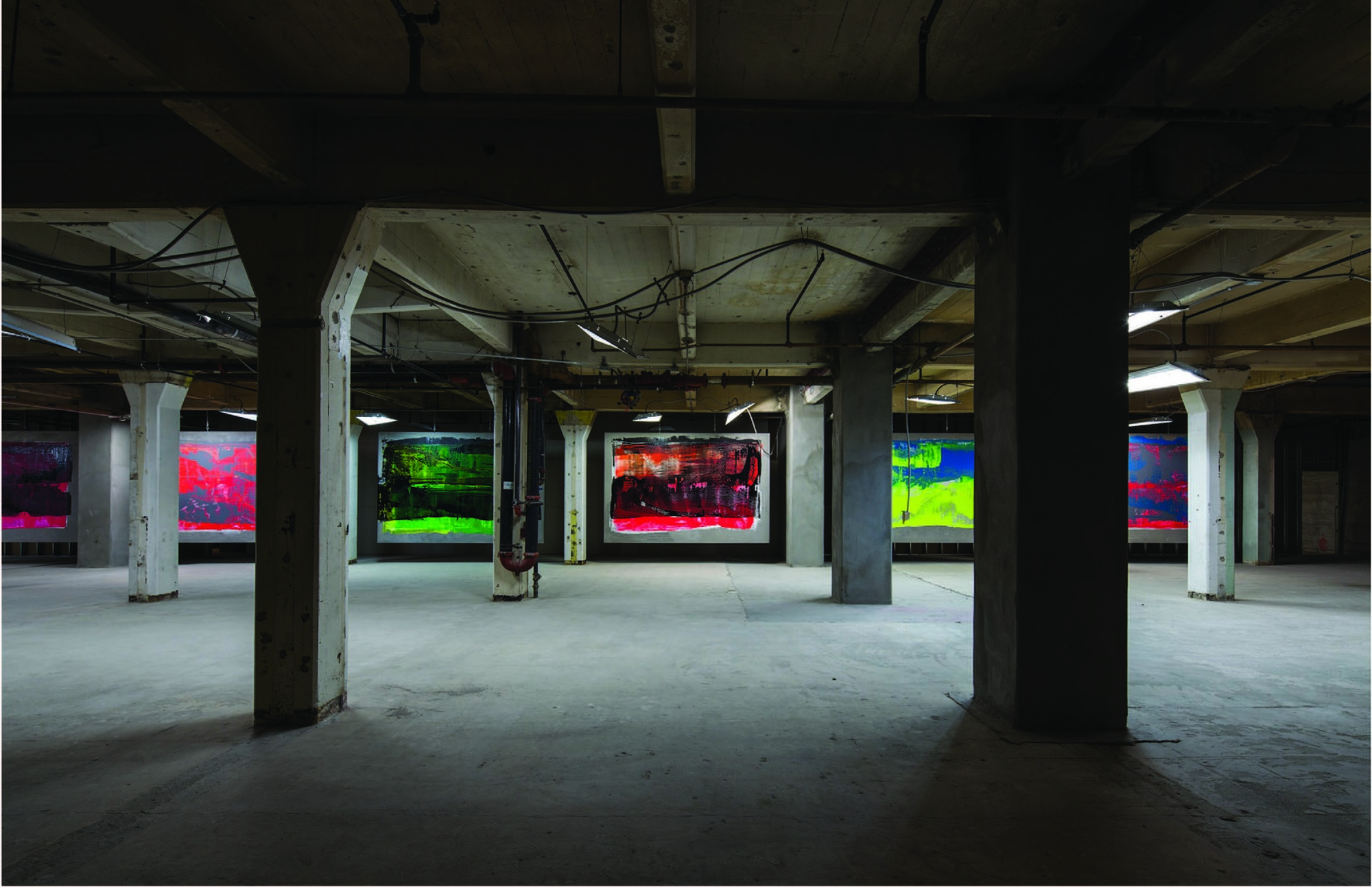 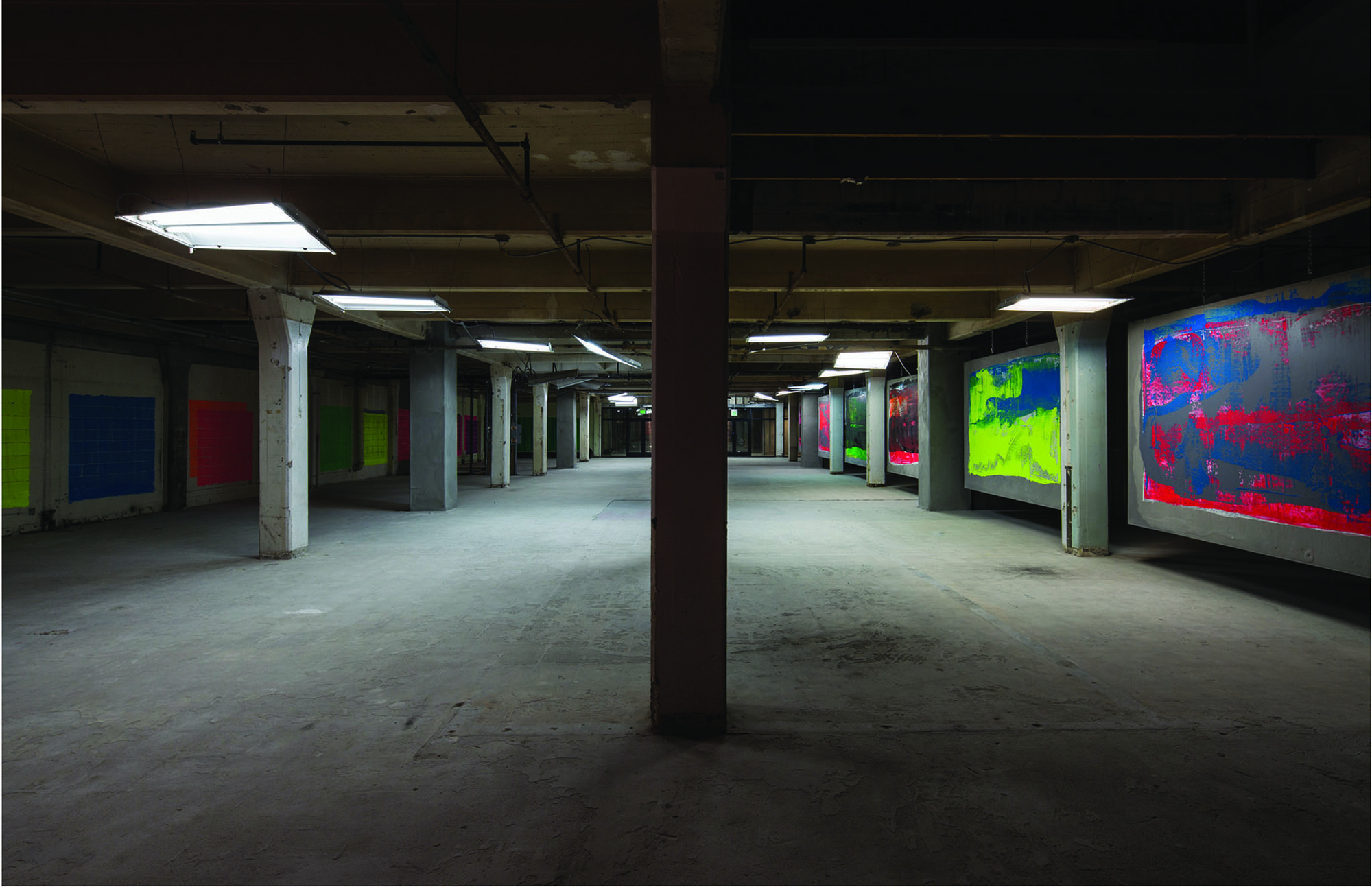 What are your thoughts on the creative community in L.A. as a whole?

I believe it’s thriving.  There are more outlets now than ever before, which also creates some interesting issues.

In a time of endless options, how do you know what's good from what's bad? To me, that's where the Abstract Technical comes into play - it's a method that allows me to value and understand my own work outside of the general public.

It always come back to scale. I have my own personal value system on how and where I place my work but I also understand the larger context of L.A. and how I see my work dealing with the city as a whole. 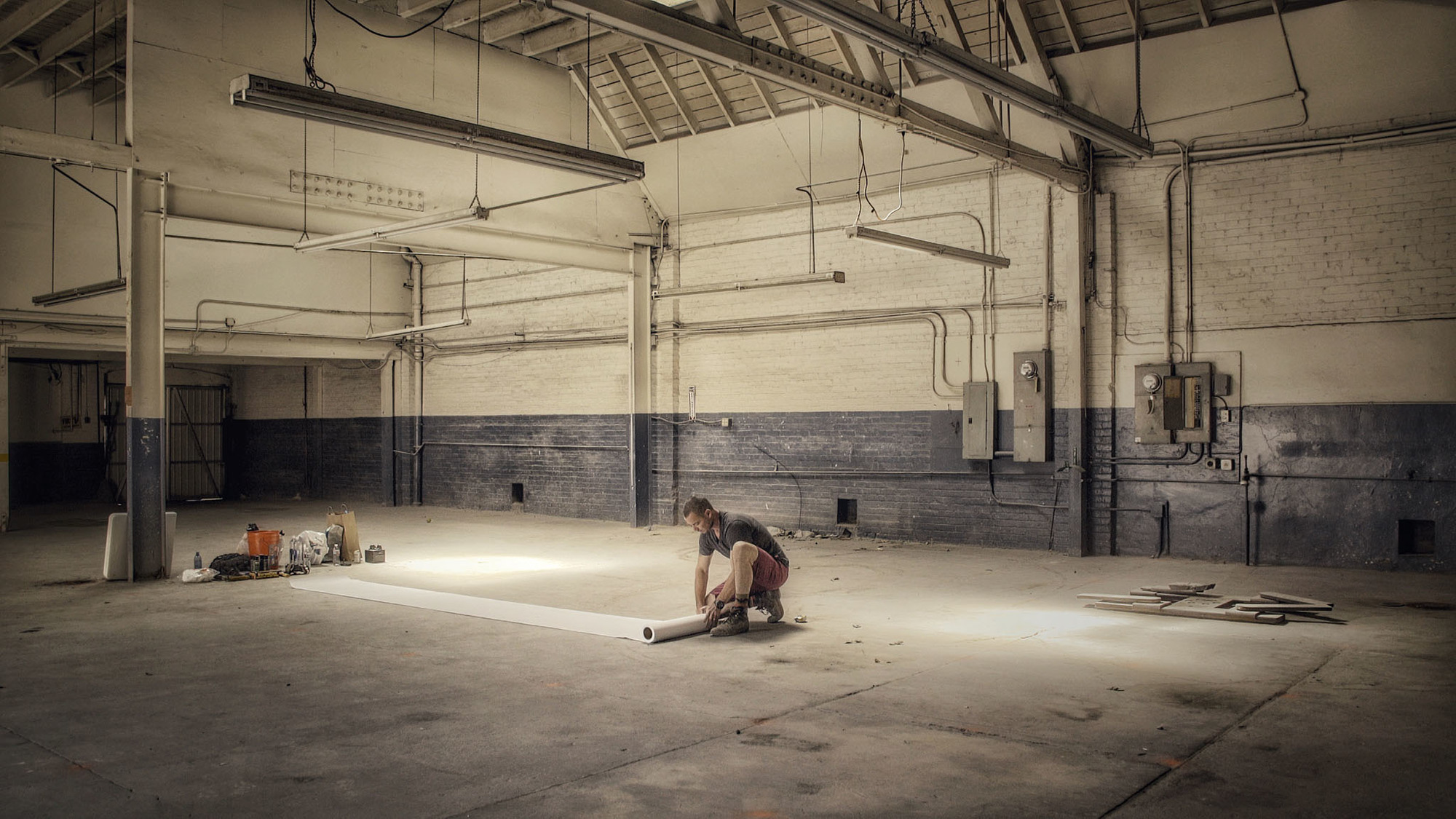 Any plans on new works in the near future?

I have some big ideas for 2017, which include collaborating with a real estate developer and a museum to produce 3 shows at a large city-wide scale.  The first show Dip will take 12' x 16' concrete walls and dip them in 300 gallons of paint with fork lifts.  Part of the strategy of introducing this scale of the sublime will be to place the work as a backdrop for artists from other disciplines to participate.

One thing about scale is that at a certain point it can't be avoided. With the political & civil unrest and human rights concern, scale becomes a wonderful backdrop for other artist to express themselves through their work.

Nesbit is currently showing at the Architecture + Design Museum of Los Angeles‘s exhibition entitled The Drawing Show and will be on display until January 8, 2017.

For further information on Nesbit and to view his previous works, visit www.mikenesbit.com