Madalina Tantareanu is a young, well-appreciated Romanian graphic designer and illustrator. Her works hang in many Bucharest homes, creating strong emotional bonds with their owners. We wanted to find out more about her work and her views on the local design market so we had a chat with her earlier this month. 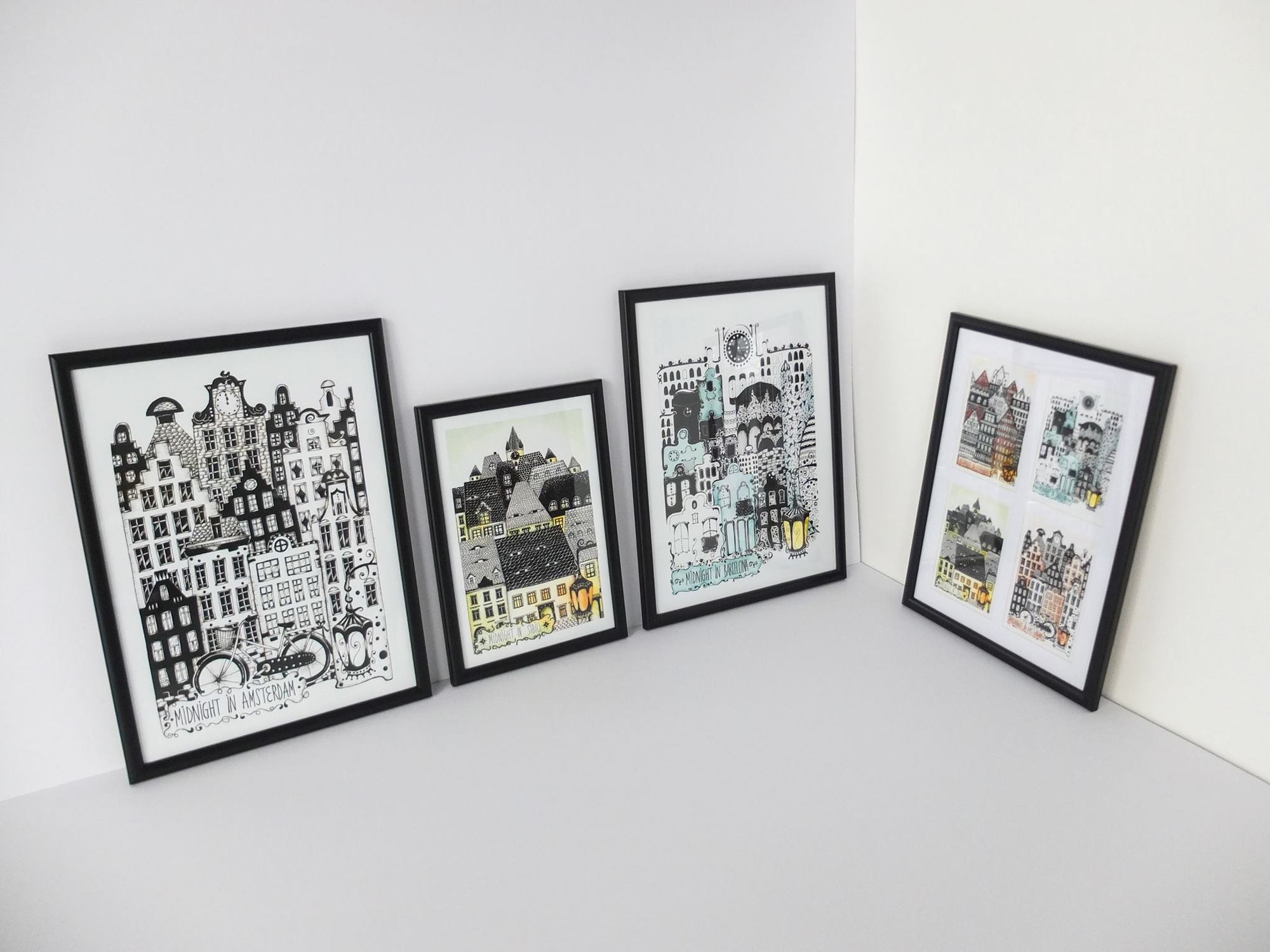 I would say you’re quite well-known on the local “illustration market.” What do you think was the project that boosted this awareness? Or was it an organic process?

I think it’s a mix between the two of them. It started as an organic process. I was drawing and practicing a lot, sometimes posting my work on social media. With time, people began to know my work. I always received messages from them saying that they are delighted by my tiny details and recognizable style.

At some point, I did some projects that showed my growth as an artist, of how I evolved, and most of all, showed how much I loved illustration. Among them, there is the “Tei Besc” illustration, the “Illustrated ABC for kids” book or the “Midnight in… ” collection of illustrated cities. I am still evolving, trying out new techniques, colors and of course, new wonderful cities to draw on! 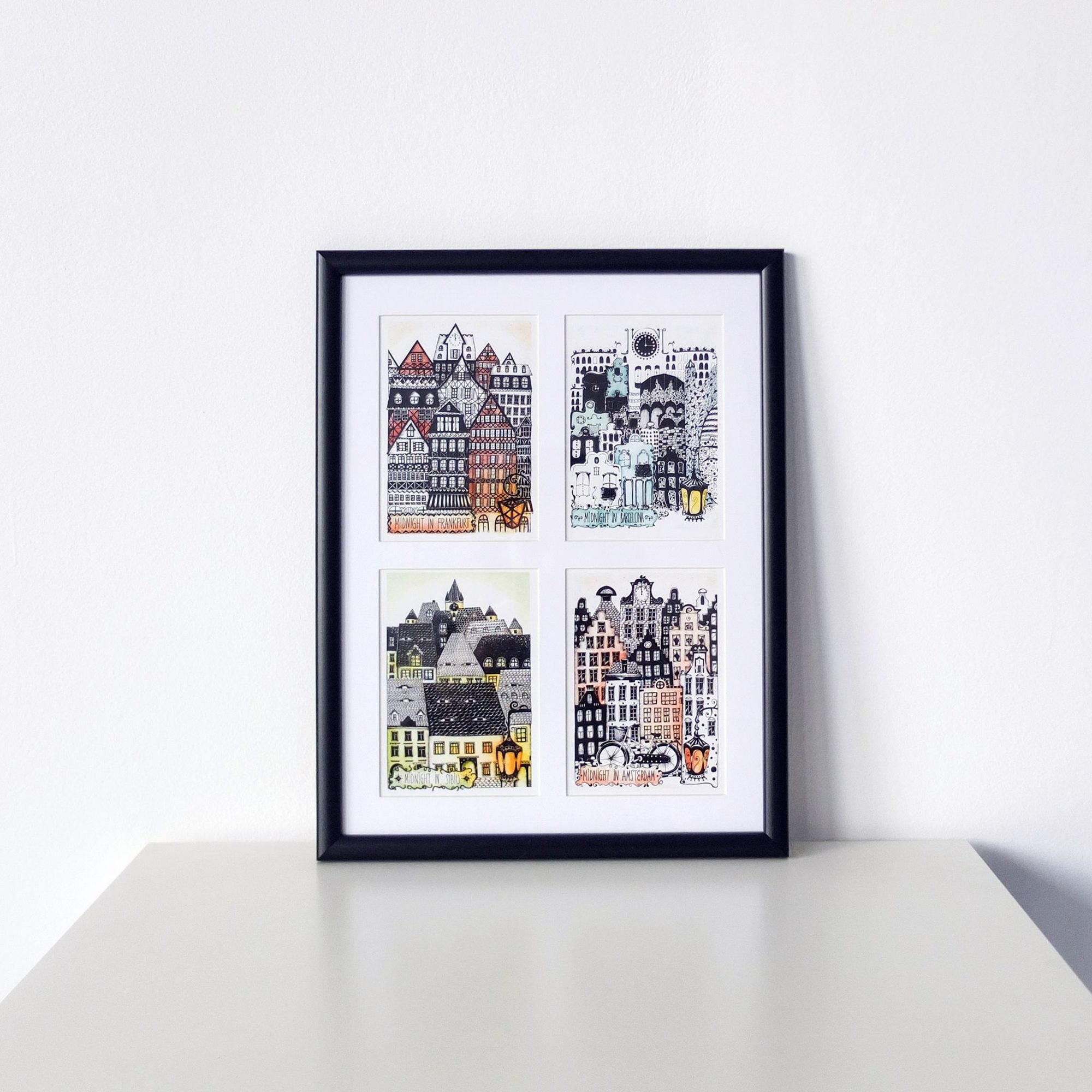 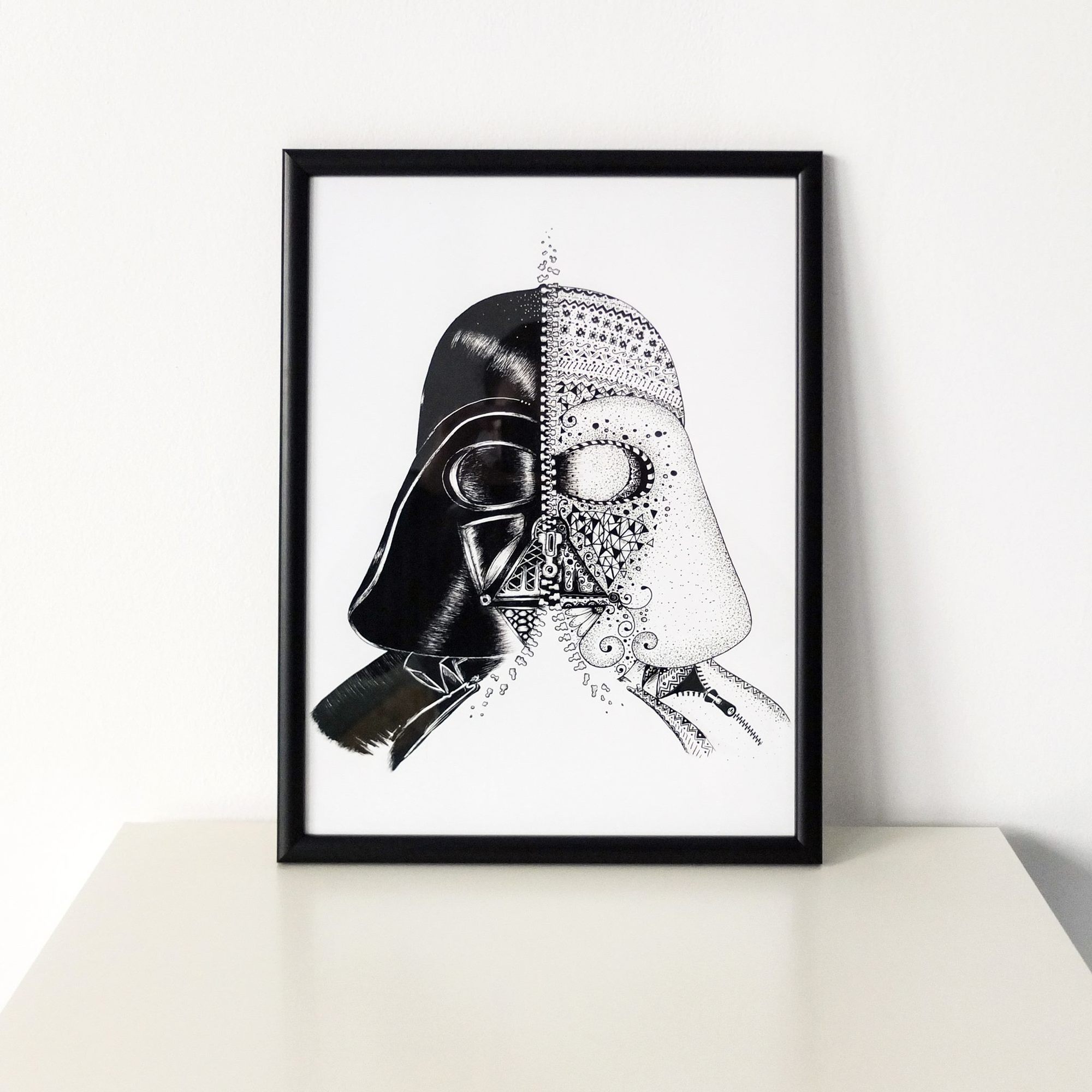 I know that you currently live in Berlin - what would make you consider returning to Bucharest?

Yes, I am living in Berlin for almost half a year. I also lived in Valencia for a year, while I was doing my Master’s Degree on illustration. I am always looking for new places, new experiences, new cultural and artistic effervescence. These experiences make you grow the most.

Bucharest will always be my home and I will always return there with joy and great energy. I do have a desire to create great illustrations from home and to be part of the Romanian community of artists. Maybe this desire would make me return to Bucharest, but for now I want to experience more. I love Romania, it`s a wonderful country and you never know that the future beholds. Bucharest, Berlin, Barcelona. It doesn’t matter. As long as I am happy.

Did you find any inspiration in Bucharest? What are your favorite spots in the city?

Well, at first, after returning from Valencia, I didn’t. I had some sort of a creative block. But I guess that it’s normal. It was a quick change between the master creative atmosphere, great artists and amazing teachers and a freelance career that was just only starting in my living room.

After some time, I slowly came back to normal and I started to draw again. The inspiration came along with the changes I made. I started going to an awesome maker space in Bucharest, I took part in exhibitions and began to sell my prints all around the world. I have so many favorite spots, that I don’t even know where to start. The house where I grew up inspired me the most. My mother has a passion for textiles, small decorative objects and lovely details. I started to draw some of them, at that age those tiny motifs and patterns were a great inspiration!

I basically draw inspiration from every place I go. From people, from a song, from a leaf, from a house. 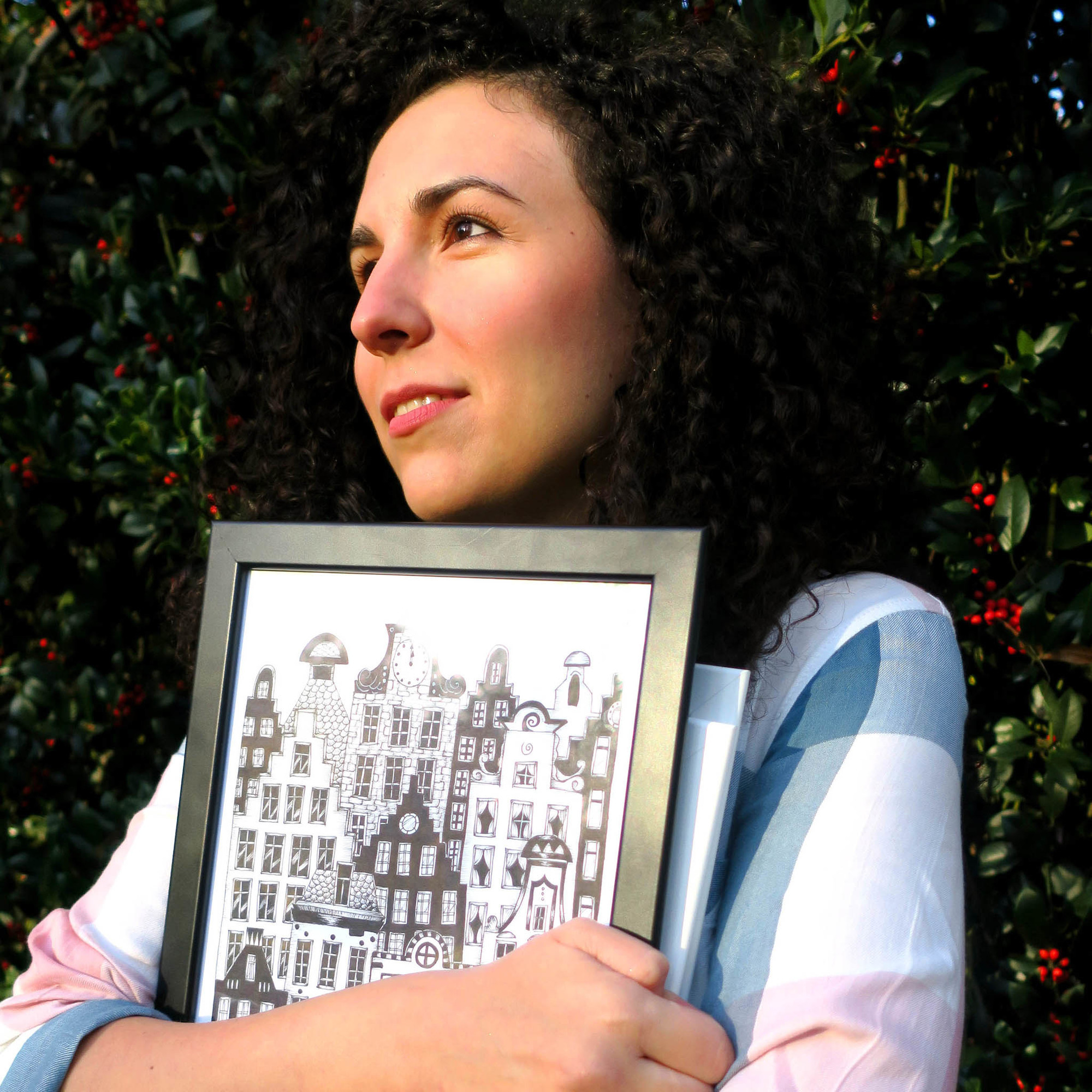 How is the design scene in Bucharest compared to other European cities?

The design scene in Bucharest is growing. Definitely growing. Bucharest started a few years ago to have awesome cultural events, art events and lots of talented designers and illustrators. Of course, art in Berlin is a bit different as it is a bigger city, multicultural while gathering so many different people and creative minds from the whole world. It is a fascinating art and culture city.

Your illustration work was recently part of several product designs (lamps, chairs). Do you see yourself further going in that direction?

Yes, I had some collaborations with architects and designers from Nod Makerspace in Bucharest. I am still in touch with them and we are working on a nice lamp collection based on the cities I drew, for the beginning of next year. I am open to mix my illustrations with product design, so you should expect some new awesome projects!


"I basically draw inspiration from every place I go. From people, from a song, from a leaf, from a house".

Your work is very rich in details — would you say that’s a mirror for your spirit? Or you’re rather a black or white kind of person?

My work definitely reflects my spirit. When I draw, I get in some sort of creative mood, very focused on what I have to do and very eager to make the most of each illustration. I have no rest until it’s finished. The more I draw, the more I add tiny details, the more I express. It’s just me in there, on that piece of paper. Me in different colors, me in black and white. 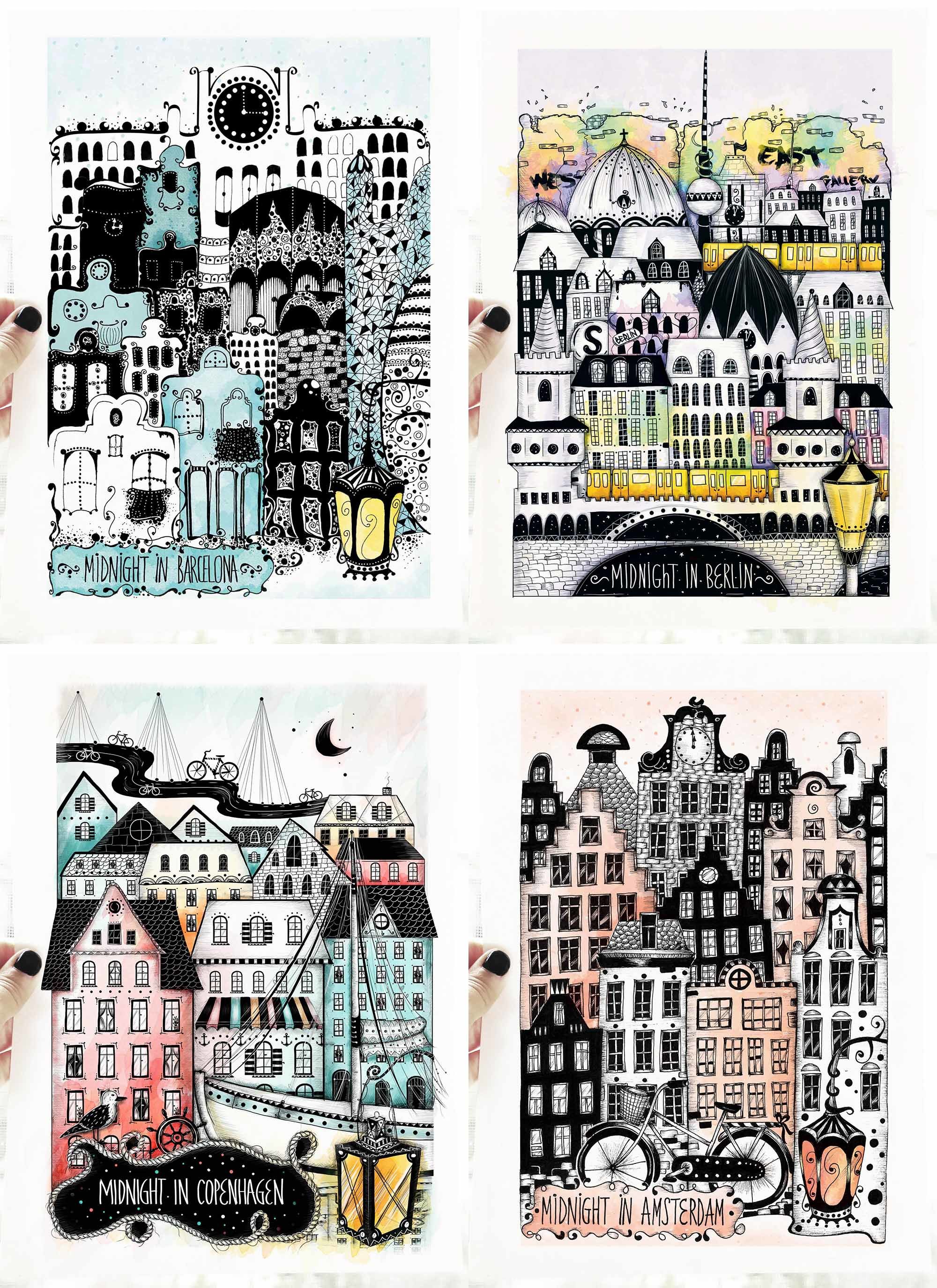 What about your new Etsy shop? What can we expect to find there in the future?

My recently opened Etsy shop is an old plan, but I finally got the time to do it. I really wish that my illustrations could be available to people all over the world, so Etsy seems like a good idea. I plan to continue my “Midnight” collection for sure with new illustrated cities and areas like Bucharest, Brasov, Maramures, Moscow, Dublin, Prague, New York and many, many more! I have so many ideas and so many requests that the only two things I wish for are longer days and infinite ink. 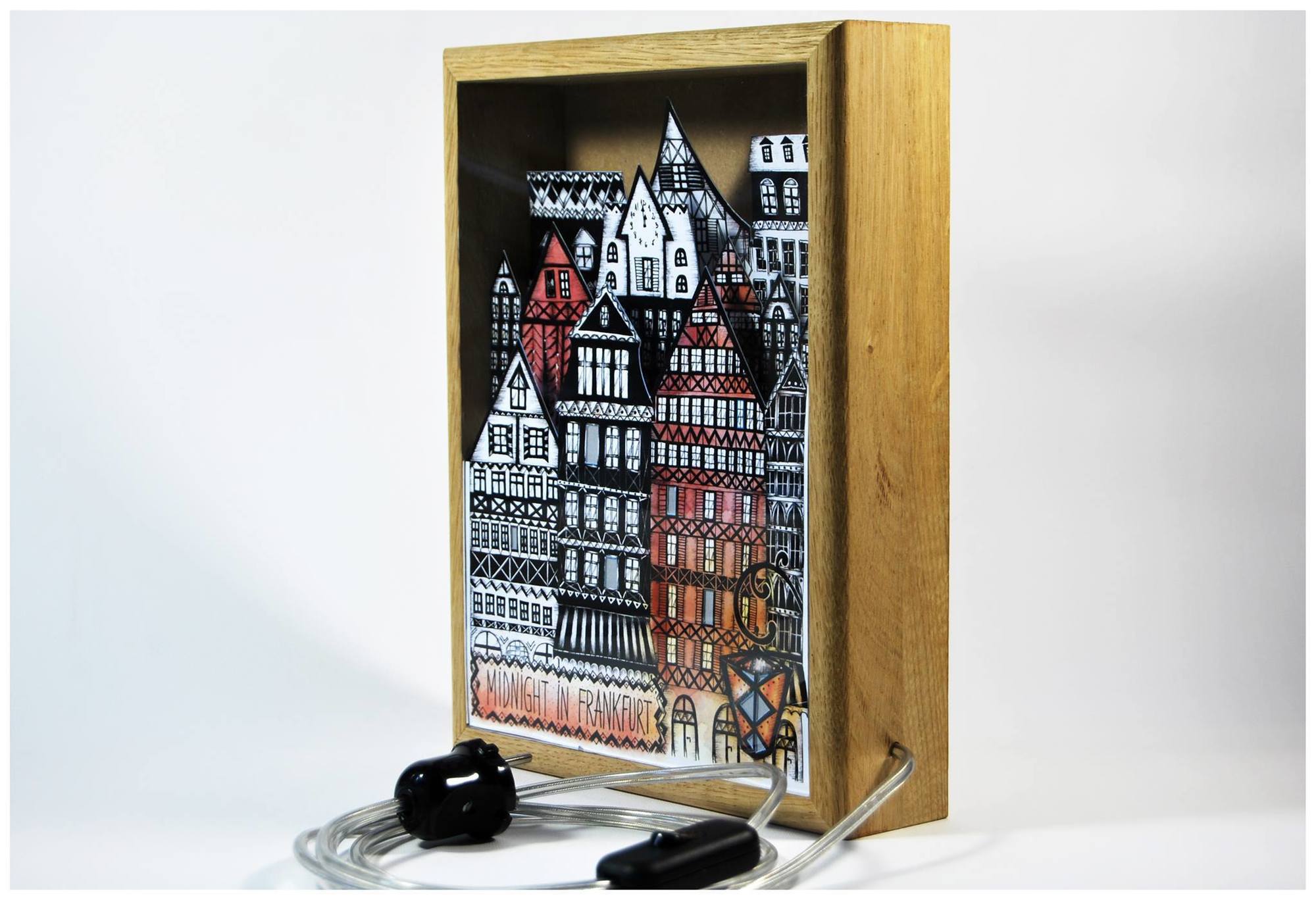 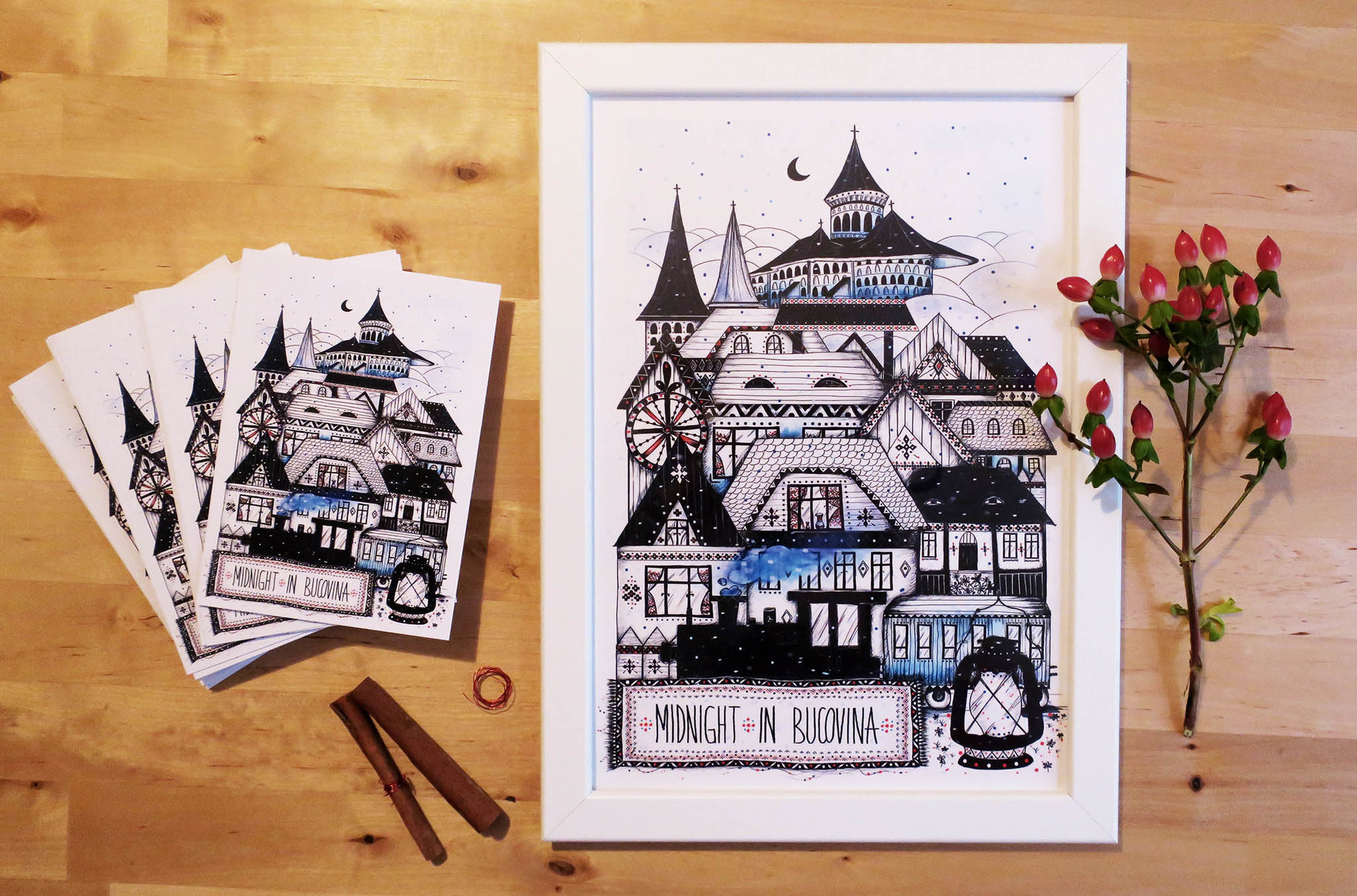 We’d like to thank Madalina for sharing her thoughts with us and we recommend you to further check out her work on her website and Facebook.