Palm Guitars has gained a special status in Amsterdam, welcoming a wide range of musicians such as the likes of Eddie Vedder. Meet the owner, Søren.

Wiping the rain from my phone I was sure that there was a mistake but I had come too far now to go back as I cycled farther away from the centre of Amsterdam on my quest to find the infamous music store. Months earlier in 2013, with 17 thousand other Pearl Jam fans I had heard the lead singer; Eddie Vedder, engage with the audience telling of his love for Amsterdam; the home of many good memories and one of the best music shops in the world. I was too curious not to go and investigate, as I myself was new to the city and looking for more stories.

An hour earlier I had explained my situation to an aloof Dutch voice on the phone, I was a photographer and a massive Pearl Jam fan whom wished to visit the store and the meet the man that “Eddie had sent”.  Standing waiting for the door to open I played back these words thinking how crazy they must sound but now it was too late, then a figured appeared and ushered me in for the first time to the Aladdin’s cave of music that is Palm Guitars . 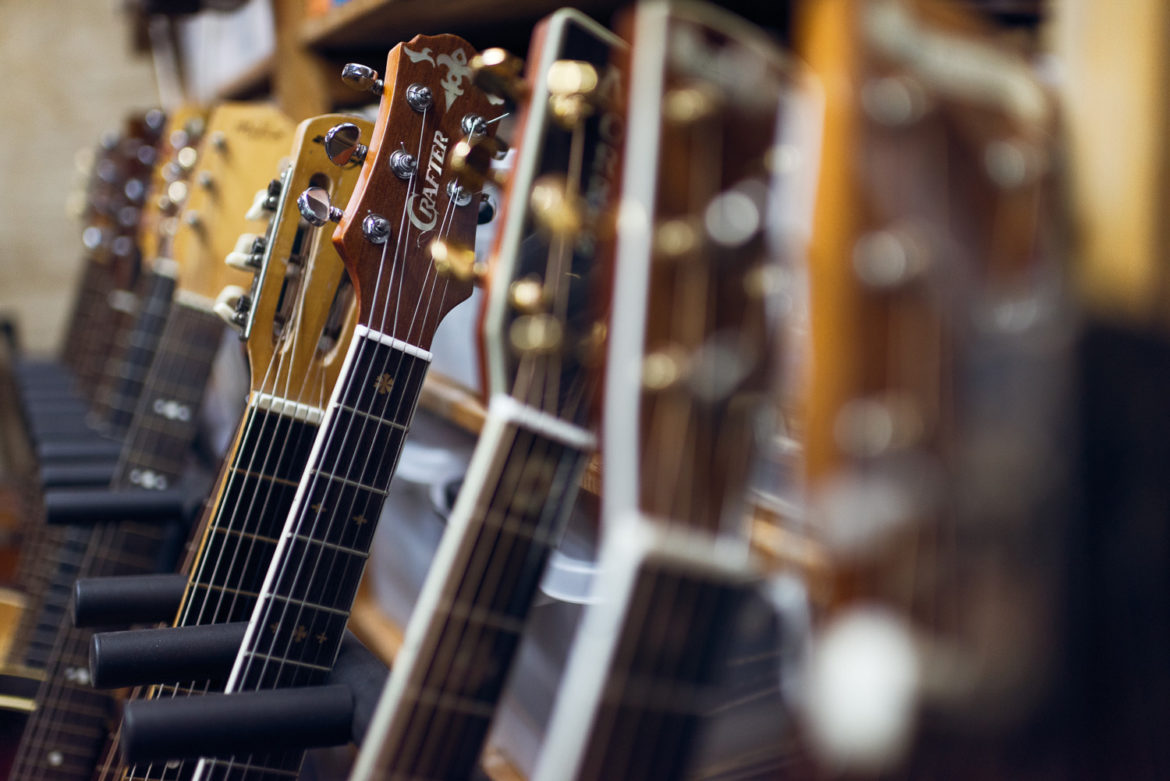 From humble beginnings Palm Guitars has gained a special status in Amsterdam. The wide range of instruments have drawn in musicians from all the around the world to explore it wares, from the world famous groups to obscure passing bands the myth has spread wide of the passion for music that sits within the store. Over the next couple years I would visit the store many time to see Søren, each time with new stories to tell or instruments to show me, with the words ringing true that he would “warm up after while”  as he shared his tales of Amsterdam

In May 2017, Eddie Vedder was once in town again for three very special nights in Amsterdam. As the last songs were played Eddie once again shouted out to his friend sat close to the stage that he made sure to visit when in the city; Søren AKA Mr Palm.

Not being a musician I feel privileged to have spent some time in his presence. A true no bullshit Amsterdammer, with a kind heart and a love for Music. Palm Guitars is an authentic piece of modern history of this great city. I did make good of Eddies caveat to “make sure that you buy something”  as Søren dug me out a beautiful 70’s Yamaha guitar that I have been trying to teach myself. Although on my last visit he drily stated that I would need another 30 years to master it! 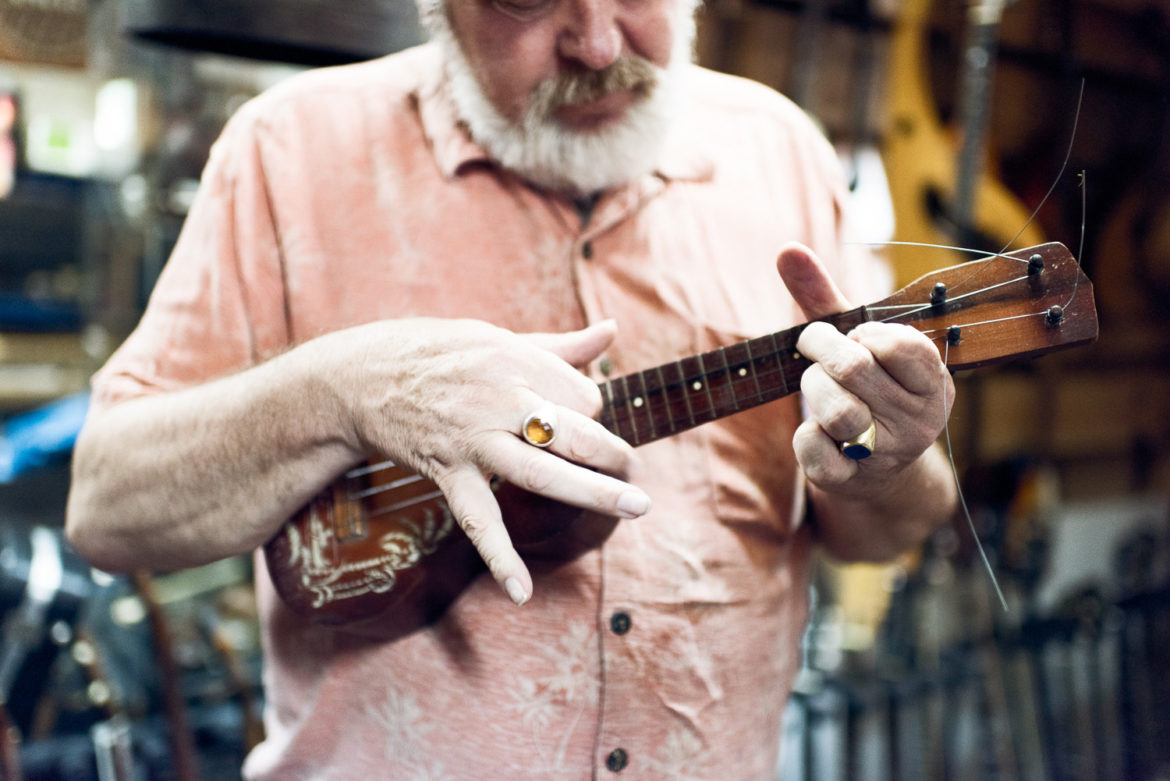 How did you get started with music? Did you grow up in Amsterdam?

I don’t think that I ever grew up! Palm Guitars began on the Waterlooplein flea market in 1976 as means to make some money. I began making leather goods and slowly began to sell a few antiques, carpets and rugs. Then I came across some guitars and violins, of which I knew nothing about, and they quickly sold. I saw that they would be far easier to sell and I slowly began to expand my collection and become interested in the instruments.

Is this how the shop began?

That came later. I was traveling a lot and it was hard for people to find me at times. So upon return from England in 95 I decided to become more serious and invest my knowledge in a shop, which I found in the center on the s’Gravelandseveer. It began to grow, slowly over the years through word of mouth, and as bands came in from all over the world they would share their experiences and the reputation grew with it.

Why do you think that Palm Guitars gained such a reputation over the other guitar shops?

I just left my customers to it and let them play anything that they liked. I would also show them the different sounds on other instruments. Like I would show guitarists the mandolin and explain to them that it was easy to play as it was just the guitar chords upside down. It was such an unusual shop, people would tell their friends and then come back to the store to remind me of what they had purchased years ago.

Also as I was a trader a lot touring bands would come into town and bring strange instruments that they could sell at a higher price, especially if they came from a communist country such as Cuba or Tajikistan. Musicians began to hang out there. 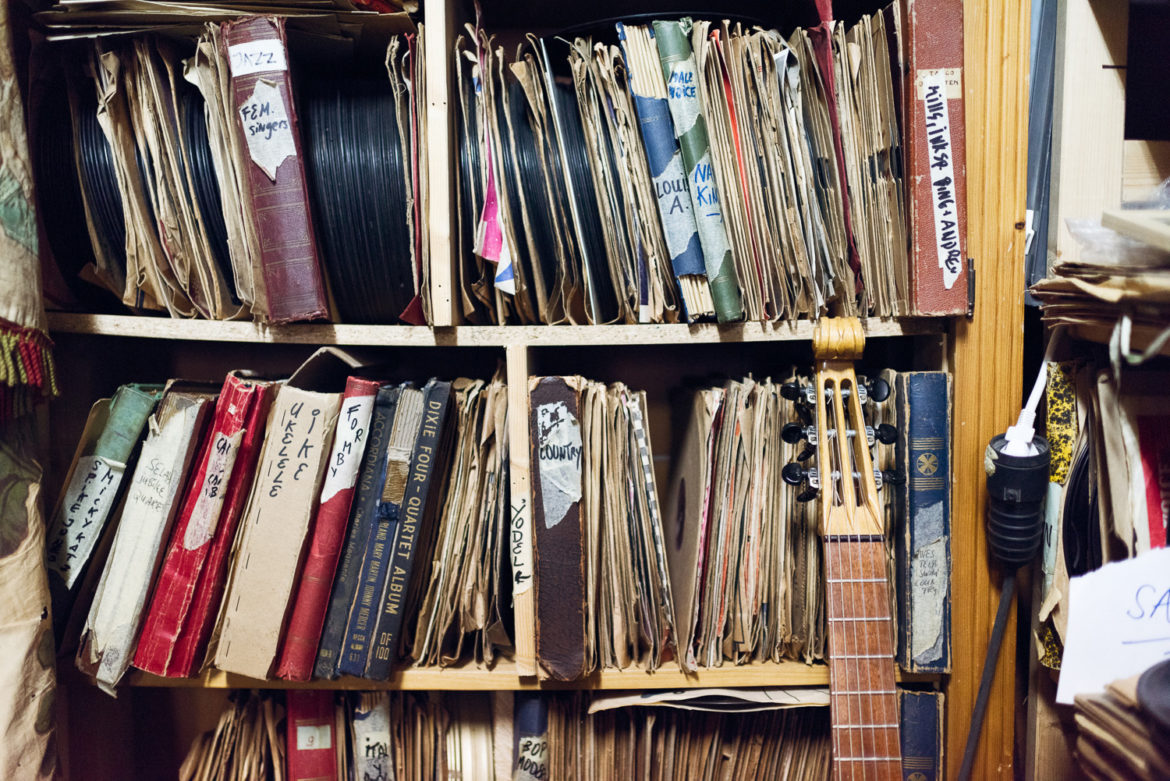 You must have met some really interesting people, from the ones that pass through your doors.

It’s always nice to meet a good musician. Someone that knows how to get a sound out of an instrument. It could be anything, I had a trombone and one day a Turkish man from a classical orchestra came in and the sound that he made was pure magic. Musicians always come by, some are big names some are not known at all. Although I may not have always recognised all of them and there could be cases when I have kicked them out. Sometimes the record companies will be looking after musicians and bring them to the shop, that’s what happened with Eddie Vedder and Tom Waits. They are both really nice and I got on with them well, very down to earth people. 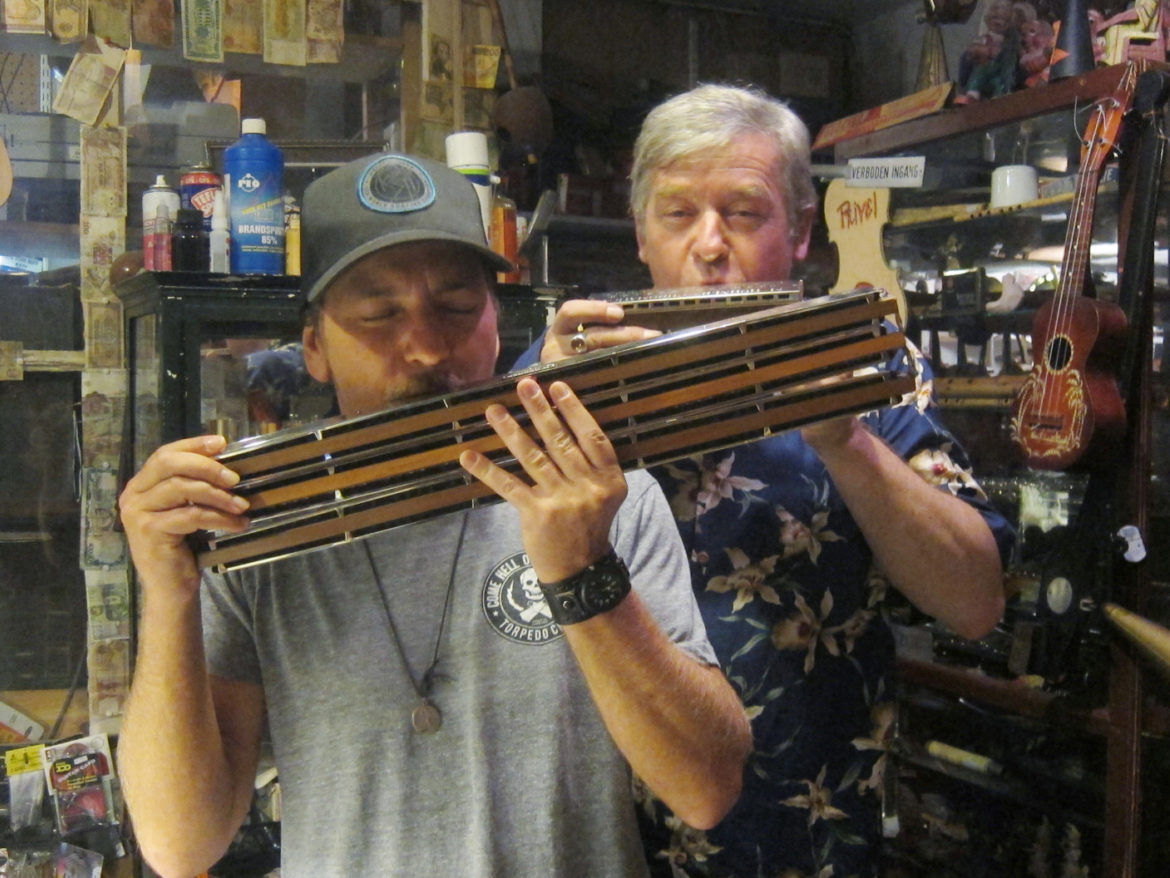 I remember at the Pearl Jam concert Eddie said on stage that Palm Guitars was one of the best shops in the world.

Yes I remember that joke he made. He spent a few hours here and we got on well. I was there that night and went backstage at the end and he gave me a ukulele and I gave him a South American instrument. From that alone, around 80 people came to the store saying that "Eddie had sent them"! I would ask if they would like to smell his sock as he had wrapped the ukulele in it so that it would be safe. That raised some interest. Soon afterward there was a fire and flood at the shop and I had to relocate to where I am now.

What happened to the original Shop?

While I was away there was a fire and flood at the store and it had to be closed so I relocated here. I was there for 20 years but now I prefer to be here as it’s just by appointment only, I had some good times in the shop but it’s much better now. I walk past it sometimes and see that it’s a gadget shop now... Nothing lasts forever.

Where did the name come from?

I like the palms being associated with an Oasis, being a beacon in a desert to be drawn to. Palm Guitars as part of Bark musical instruments as it's not just guitars, in fact later I realized that I should have called it “Palm Strings.” That would have been a nice play on words.

Do you prefer the sound of a certain instrument? I see that there are clearly more guitars here.

A master guitar builder will know how to get the best sounds from wood or the bracing but it doesn’t have to be super expensive. These days you see famous guitar players with guitars worth over €150,000 and violinist could pay up to a million for a Stradivari. He was a craftsman well ahead of his time in the 18th Century in that sound just can not be matched. That’s also the same with guitars as the task was to make them sound as powerful as they could pre amplification, so they worked on the bracing so you could have heavier strings. The first guitar to be loud enough for a solo was the resonator, made infamous by the Dire Straights album cover. 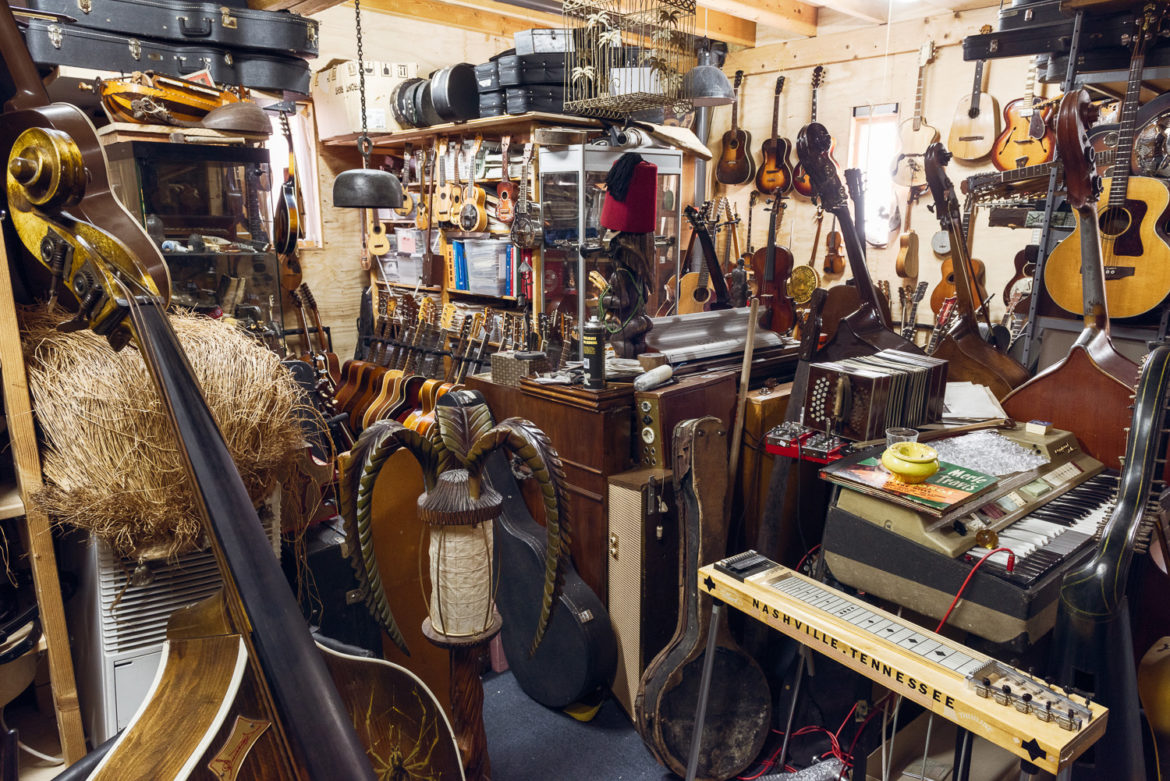 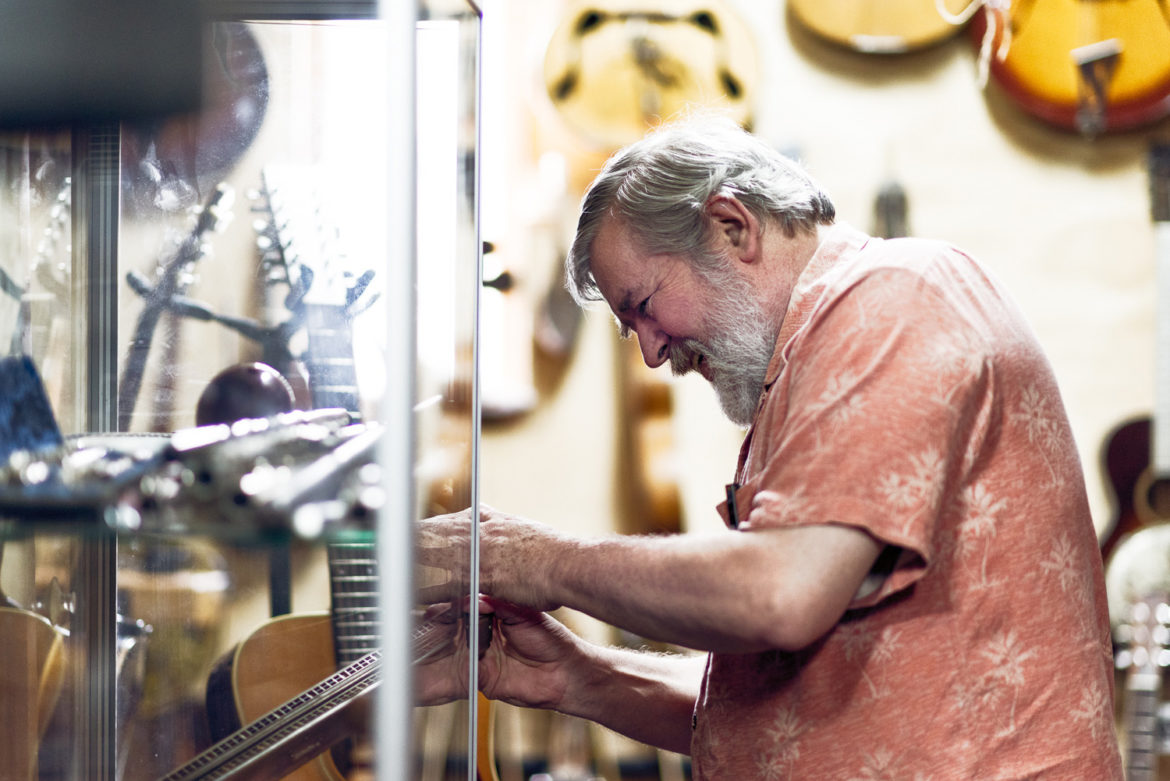 How did you learn the guitar?

Well, you begin in school with a few chords and it grows from there. I learned from the musicians that I have met along the way. I think that it was a different way of learning when you couldn't find all the information at your fingertips. There is a story that I like of John and Paul when they began they only knew two chords but then they found out that there was a guy across town that knew the B7, so they took a couple of buses and knocked on his door so that they could learn it. And that makes a difference as people can learn a lot of technical things but they don’t have the same emotional attachment.

Who do you think the best guitar player is?

Django Reinhard is one of my favorites, he is the most inspiring one for me, but I can’t play his style at all. It was one of the first records that would play from my fathers’ collection. It had a certain happiness to it that I liked. Nowadays when people play gypsy music the notes can fly everywhere but not with Django, he was a true master and of those. There are not many. 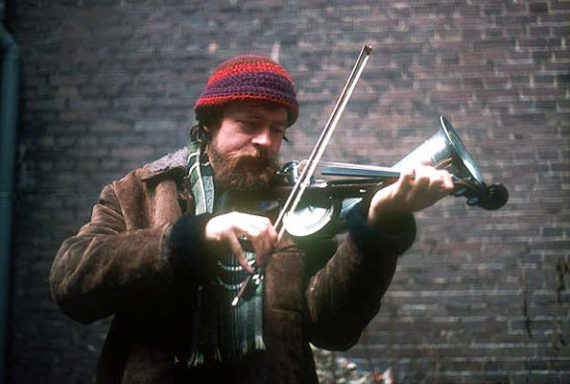 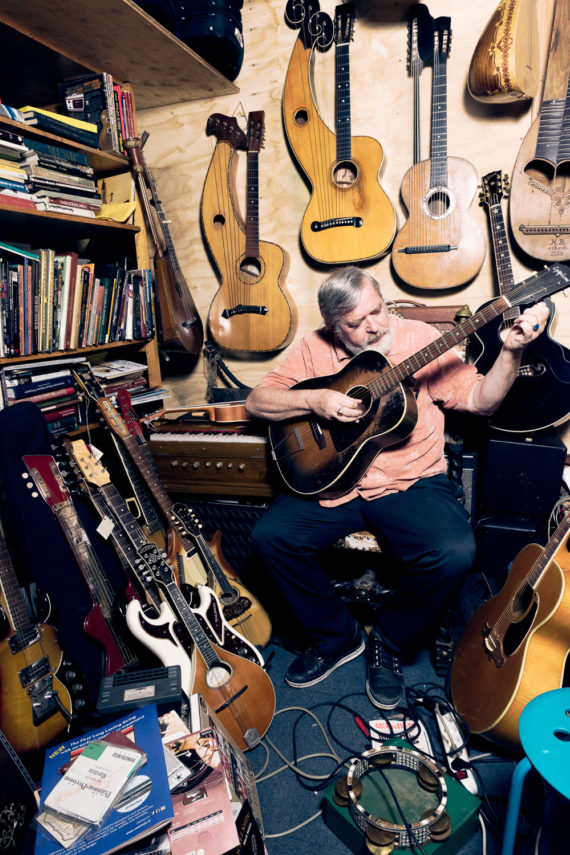 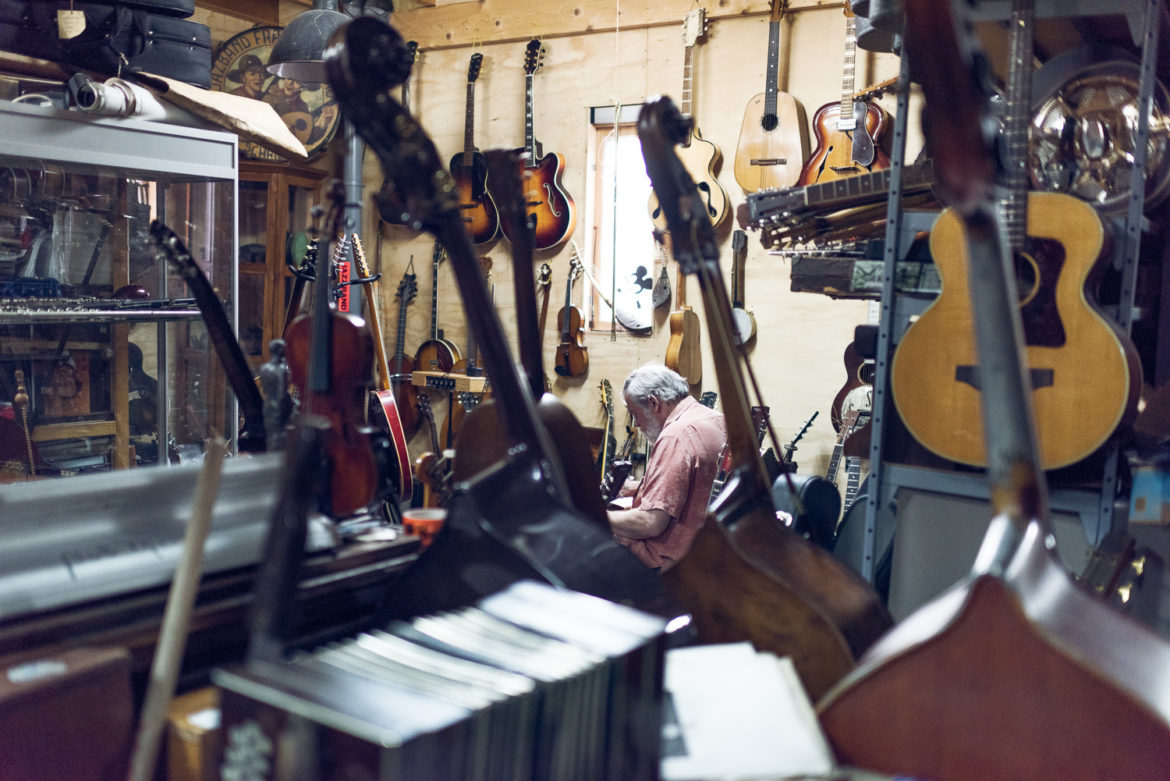 Is there one certain type of guitar that you would love to find?

Well, the ones that everyone is looking for but they are extremely expensive. The 59 Les Paul for example would fetch €100 - 130k. The Selmer that Django Reinhard played is a very particular guitar and certain jazz guitars from the 20s catch my eye the most.  I tend to like acoustic guitars more as they are harder to fake. I have around 300 guitars now but I try to be more selective as not to fill this place out too much. The one that I play the most is a 1940 vintage Gibson Roy Smeck, who was a famous guitarist in the 30s. This has a wide neck as is more of a Hawaiian style but it’s actually very easy to play. It has a very rich sound.

Do you think life is better as a musician?

Or a music dealer! I never really wanted to make money from music but I do love it and play everyday. It was a decision that I took to become more serious from the market days and then it became my life. 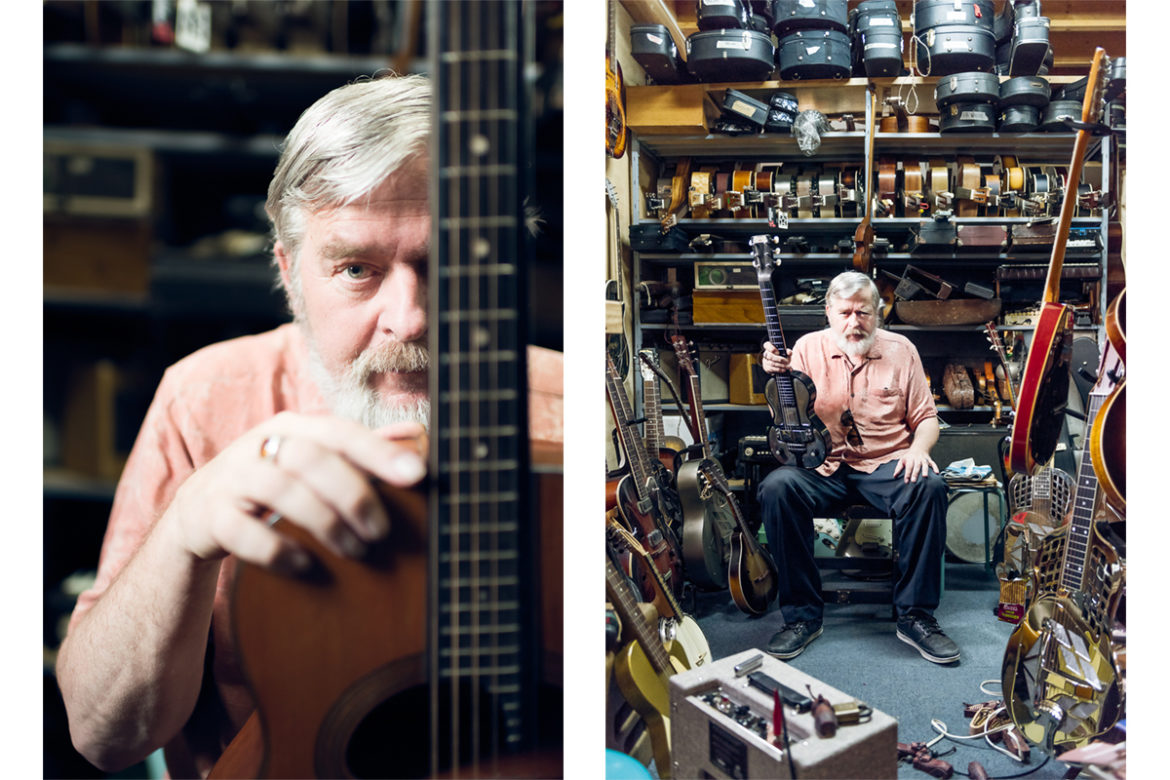 Thank you, Soren for your time, really appreciate it.

Appointments can be made by booking through the following link.