Medellin - from most dangerous to most innovative city in the world

Guest correspondent Casper went to Medellin as his second stop to find out more on what exactly happened in those years of transformation, what pushed it, and what still has to be done.

"Close your eyes and think of a happy memory from your childhood. Take this memory, open your eyes, and smile like the happy child you once were. Now embrace your inner child and go down the slide!" – Stiven

We are standing on top of a slide in the middle of Comuna 13, once Medellin’s most dangerous neighborhood. Stiven and Esteban organize free walking tours to show visitors their neighborhood that only recently no one would visit for fun. Stiven tells how only 15 years ago when he was still a child, he would see death bodies laying on the street on his way to school. 15 years later, now a full grown adult, he slides down the slide like a child he could never be. 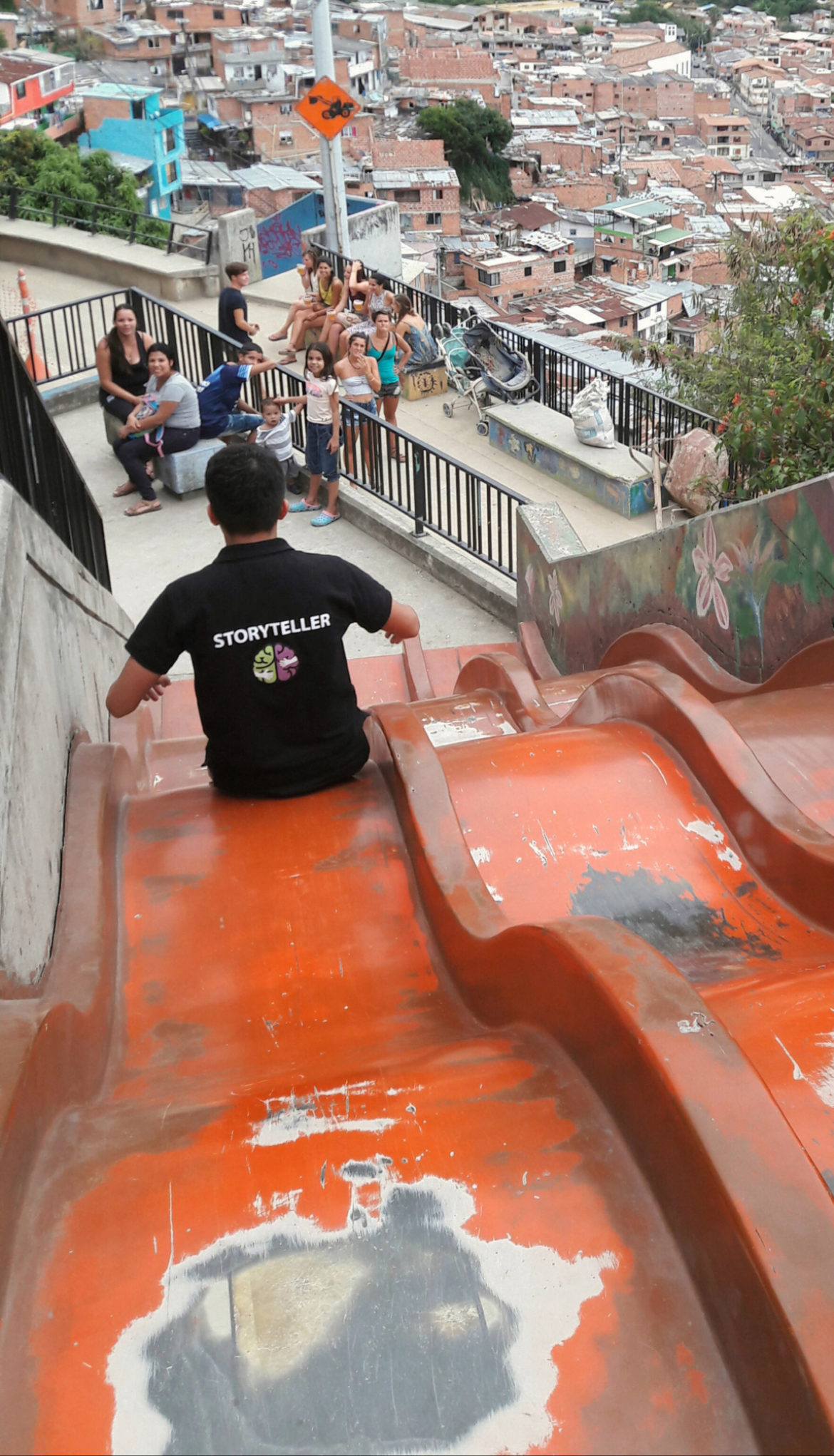 Drug cartels, guerrillas and paramilitaries all played their part in making Medellin the most dangerous city in the world. With the violence peaking in 1992 it counted a staggering 381 murders per 100.000 population. For some perspective: the most violent city nowadays (2016), Caracas, has a homicide rate of 120 per 100.000, whereas North America’s top dog, St. Louis, scores 59/100.000.

Medellin kept topping the homicide charts throughout the 90s up until 2003. In recent years however Medellin didn’t only drop down this notorious list, it was even awarded “the most innovative city in the world” in 2013. I spent my time in Medellin trying to find out more on what exactly happened in those years of transformation, what pushed it, and what still has to be done. 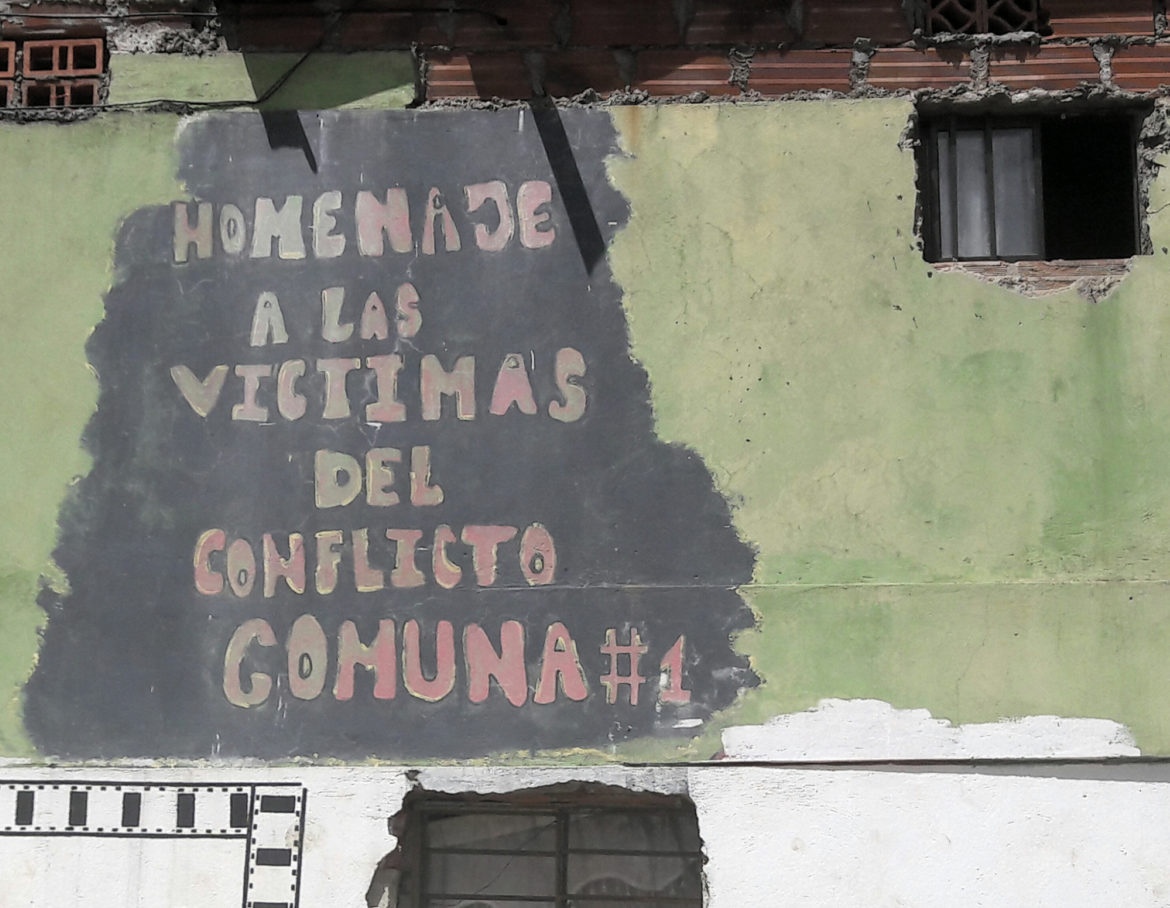 Medellin’s conflict was one between four armies: the drug cartels, left-wing guerrillas, right-wing paramilitaries, and the Colombian government. It was and still is thus a very complicated situation. Just like the problem, its solution cannot be pinpointed to one single thing. I knew therefore, it would be a challenge to grasp exactly what has happened that pushed ‘the city of eternal spring’ into the right direction.

But since I had to start somewhere, I decided to take a look at Medellin’s most visible innovation: South America’s first public cable car, or the ‘metro cable’. The cable car, in Europe better known as a ski lift, was constructed as an extension of Medellin’s metro network, in order to connect the city’s most remote and dangerous areas with the center. Social scientists Brand & Davila explain the theoretical idea behind it:

“Limited mobility restricted people’s participation in urban life in general, and their opportunities to expand work horizons, social and leisure activities, political and civic engagement, and so on. The lack of mobility converts geographical marginalization into deeper social exclusion” 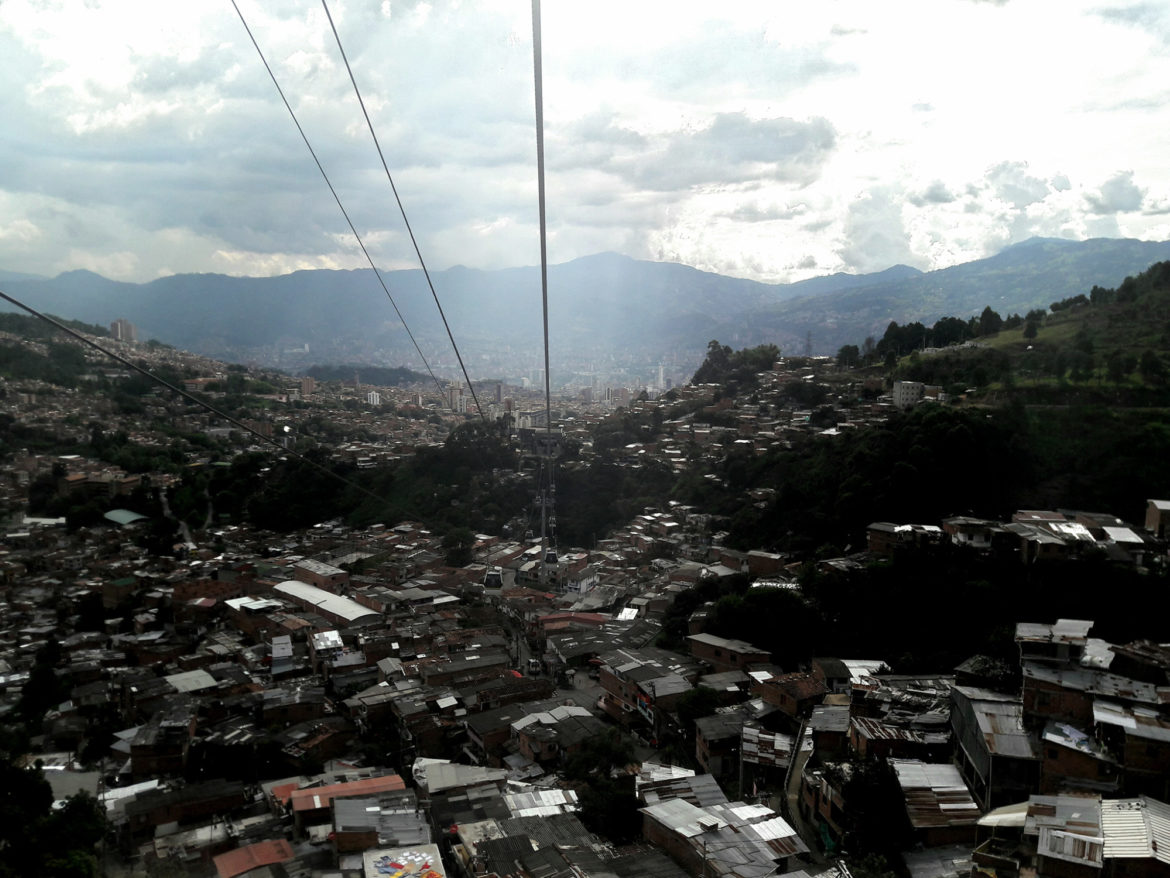 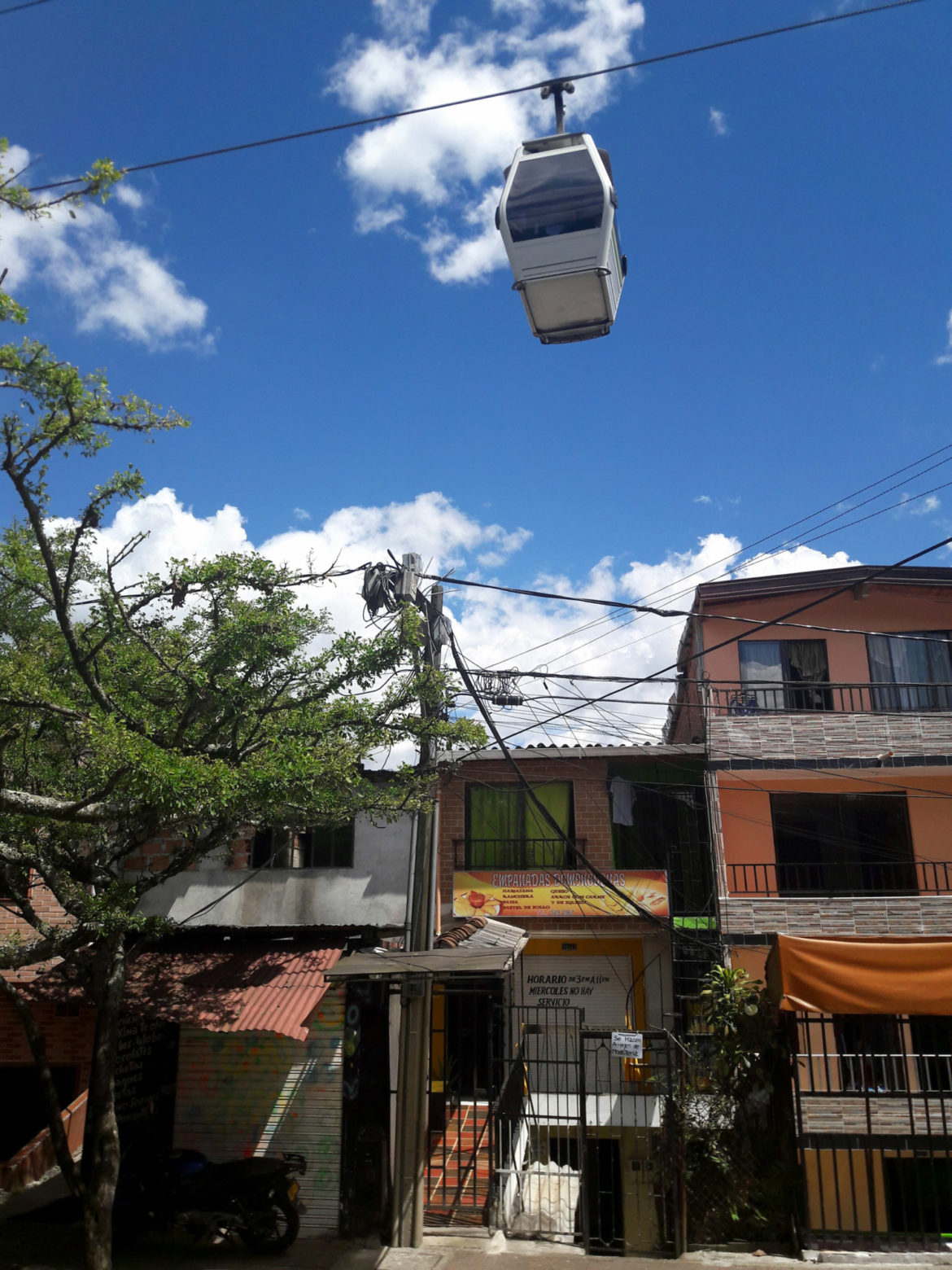 So did the metro cable actually contribute to Medellin’s uprising? The short answer is yes, the cable car is generally considered a major success and even had successors in multiple Latin American cities like Caracas, Quito and La Paz. A study to the impact of the first metro cable shows a great decline in violence in the areas reached by the metro cable, a decline much higher than in other parts of the city (see figure below): 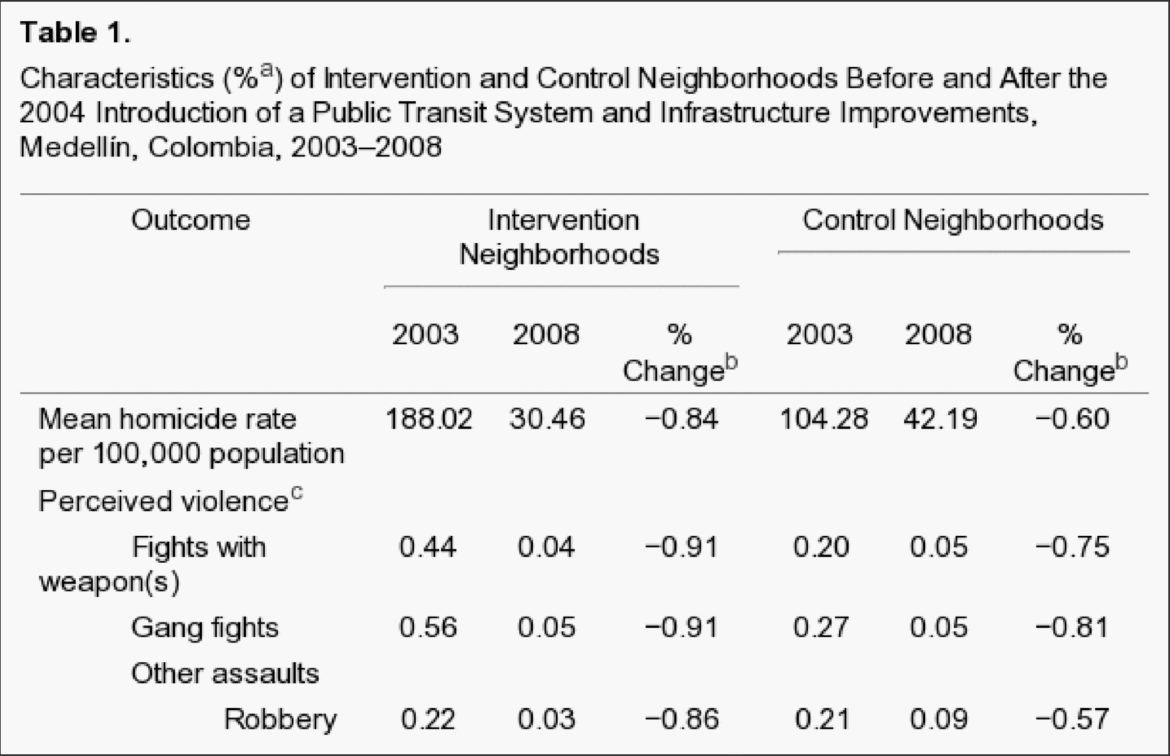 So there I am sitting in one of the gondolas flying over the massive slums of Medellin’s green hills. Across of me sits a young guy with his headphones on. Bouncing his head on the music’s beat, he doesn’t seem to be as impressed by the view as I am. What are you listening to? Techno, he says slightly disturbed. From the big windows of the gondola you get a good insight into the lives of  Medellin’s poorest. Children playing on the small steep streets, women washing clothes on the flat concrete rooftops and guys playing football on one of the many street football courts. It doesn’t seem too bad from up here.

There’s no doubt the neighborhoods were affected positively in the last decade. Much more difficult to assess, however, is whether it was actually the metro cable that pushed this development. The metro cable was part of a greater project involving investments in roads, libraries, education and increased police patrols. In Comuna 1 for example, stand two big black buildings. They are libraries. Maribell, a Medellin local, considers these libraries the hallmark of Medellin’s transformation:

“You have to understand the impact of this. Libraries in places where kids used to think the only future they had was a gun.” 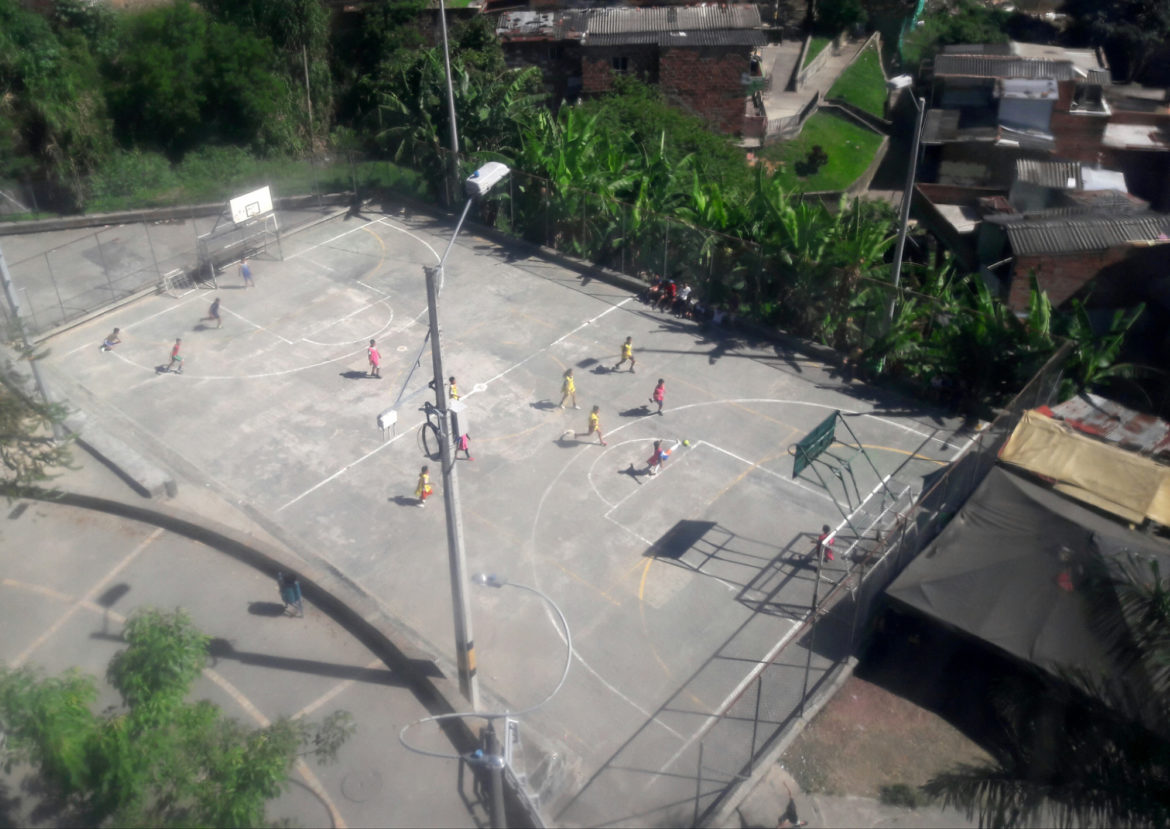 So Medellin’s transformation might have been more thanks to this kind of social programs. For example, it turns out that less 10% of the population actually uses the metro cable, whereas walking and the bus remain the main ways of transportation (Brand & Davila, 2011). For many people the stations are still too far to walk to, it’s capacity is not enough to prevent long waiting times during rush hour, and it’s not possible to carry big bulky objects as market salesmen might require. I asked some of the real experts for their opinion: the locals, or ‘Paisas’.

On top of one the newest metro cable, that just opened 2 months earlier, I decided to invest in the local economy by buying myself a beer in one of the local shops. A middle-aged lady, escaping from the heat, looked at me like I was an alien. In between the lines of her speedy Spanish, I found out she wasn’t too enthusiastic about the construction of the newest metro cable:

In the much busier Comuna 1 (where the first line opened 13 years ago) I met Santiago, a 38 year old cook. He’s trying to learn English and manages to tell me he doesn’t like the metro cable either: “It’s too big and ugly”.

Brand and Davila conclude: “there is little evidence to suggest an increase in the number of journeys made for non-essential trips leading to greater participation in city life". However, they point out, we should not forget that the cable car goes two-ways. The lady I was talking to might not use the cable car, but I would never have met her if it wasn’t there. And I would’ve never had lunch at Santiago’s restaurant to try his ‘rice with everything’.

While residents don’t go down as much as we would’ve expected, many do use the cable car to go up. For one, the area is now more easily reachable for the police and other governmental officials, contributing to the feeling of and actual safety in the area. Secondly, many tourists are now able and very happy to go up to see the favelas that were once strict no-go areas.

While on top of the newest metro cable not much is going on yet, the first metro cable seems to have brought a market in restaurants, bars and shops to Comuna 1. Even though tourists like me won’t fix any of the major problems, residents do welcome them. Esteban, an 18 years old living in Comuna 13, explains that their neighborhood had such a bad name that no one wanted to go there.

They were completely excluded from the city. Not just physically, but also socially. Because of the metro cable, these comunas (zones) are now easier to reach, they have become more visible, less stigmatized, and residents feel like they have become part of the city. “We are so grateful you were brave enough to visit our country, city and our comuna”, Esteban says with a great smile. 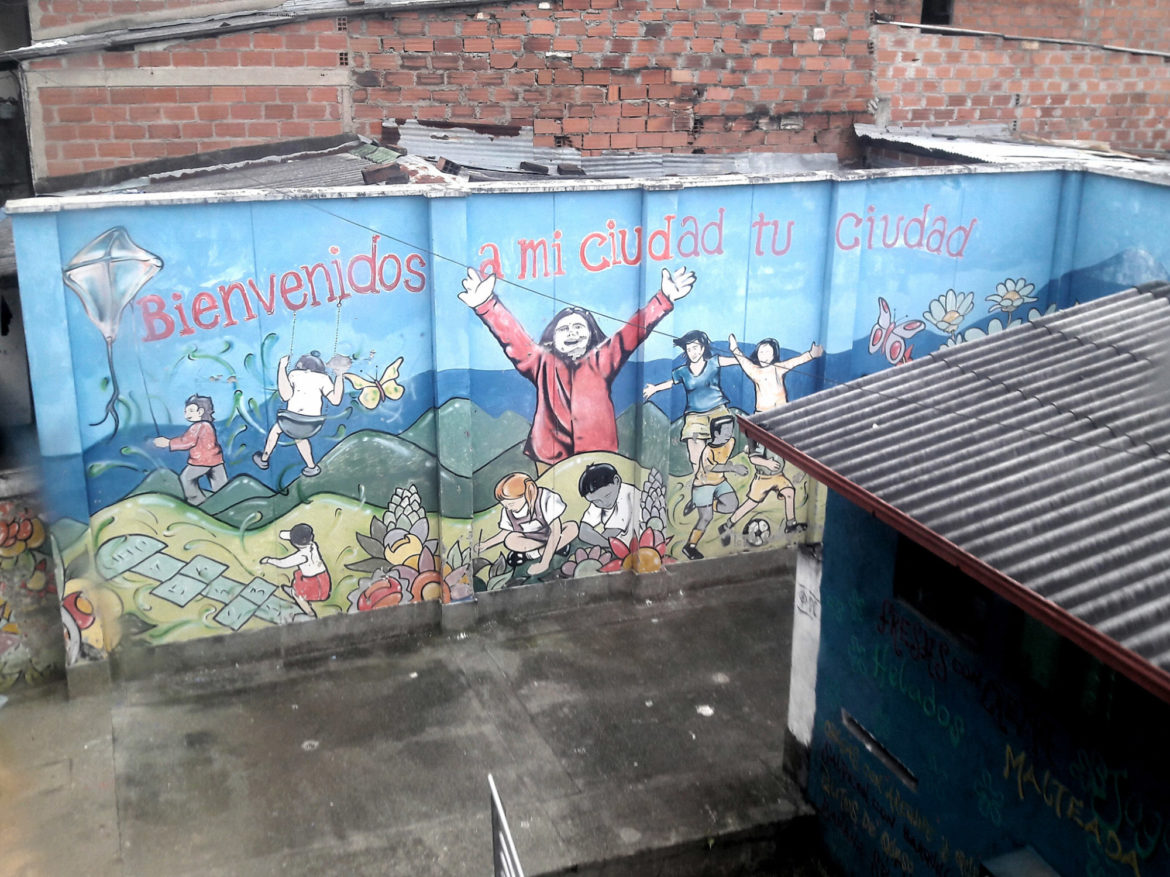 So even though the metro cable hasn’t so much pushed economic development or physical mobility, it has been successful through another often forgotten human need: a sense of belonging. The cable car gave the stigmatized areas a better name. And even though the main success of the cable car is mostly symbolic, this symbol can have very real consequences. Having said this, impoverished and excluded areas like this need more than a physical connection to the rest of the city.

For a successful transformation, infrastructure is necessary but not sufficient. Medellin’s transformation was for a great part pushed by social investments in education, health care, and safety. The success of the metro cable should therefore not be mistaken by municipalities elsewhere in the world as a cheap and simple measure to solve all the problems these areas face. A construction alike should be carefully planned and always be combined with other investments to overcome not only the physical barrier to their development, but also the social, economic and cultural ones.

However, when I ask Esteban what he believes to be the main driver behind Medellin’s transformation, he doesn’t mention Medellin’s urban policy. Instead off he answers with “La Gente.”

“It was the people of the favelas that were fed up with all the violence caused by guerrillas, cartels, paramilitaries and the government. The first ideas and visions for a better future arose in the minds of the people.”

He points at a wall painted with pictures of elephants.

“The elephants represent togetherness. The community never gave up. By helping each other and staying together they managed to get themselves out of the seemingly hopeless situation they were in.”

Social scientists Blanco and Kobayashi conclude in their analysis of Medellin’s transformation that it is success is for a big part due to a “close relation between the community and the local government” (2011). A positive development requires aid from above, but eventually, it is the people that live the problems that are at the basis of its solution. They are the ones that know best what problems they are coping with and they are the ones that know best what they need in order to solve them. 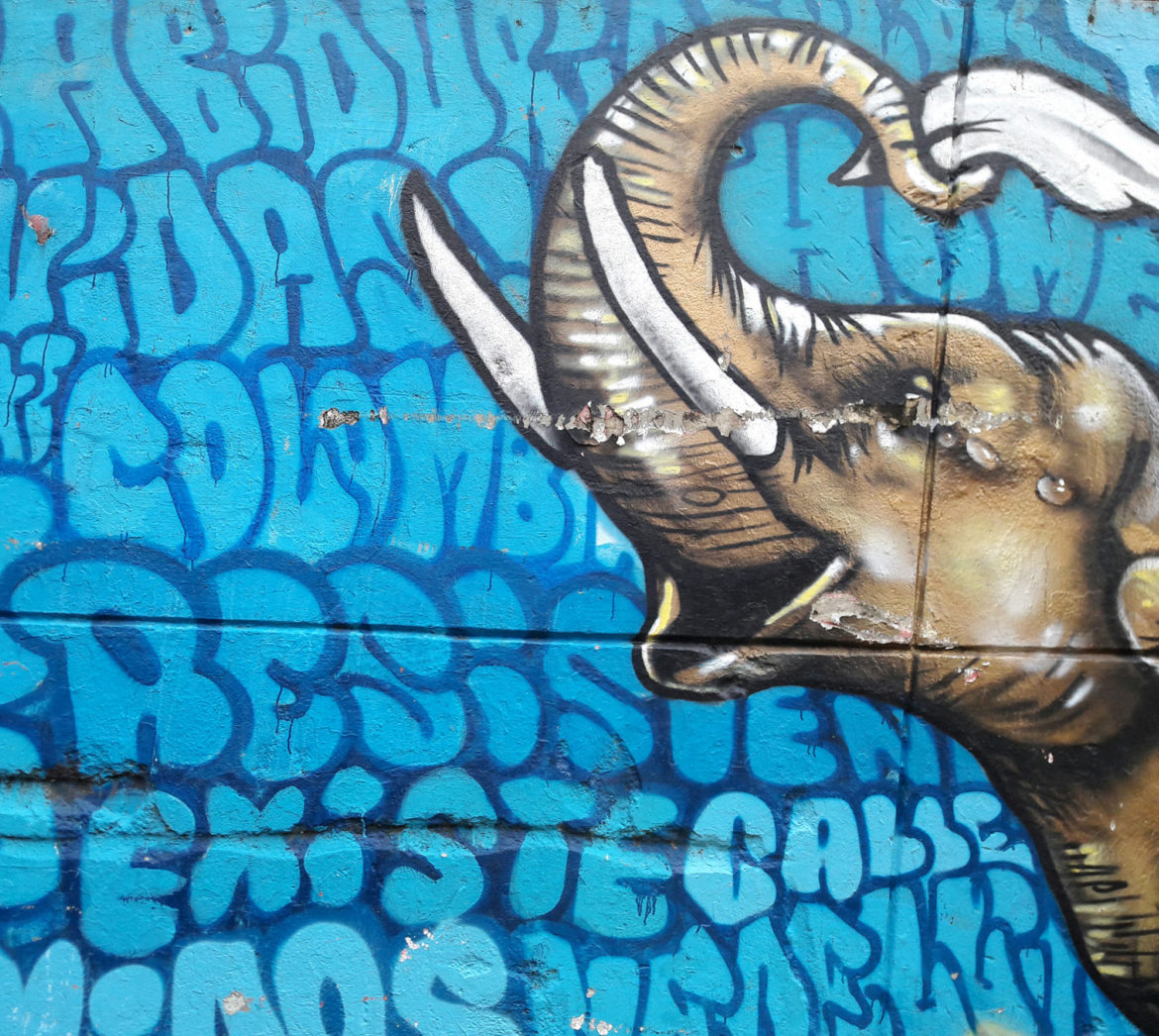 On top of the metro cable, in Comuna 1, sits a young man holding a joint. He lives near one of the lower stations along the metro cable, but likes to come up here to smoke some weed while enjoying the stunning view over the city of eternal spring.

He says he likes the cable car: “it’s much more comfortable and I use it to go to university in the city centre”.

He asks me what I don’t like about Medellin.

“the mosquitoes” I say, already regretting my answer.

“Medellin still has a lot of problems”, he replies, pointing at his joint.

Even though Medellin has made a lot of progress it’s not quite yet what the people of the favelas had in mind. Poverty, inequality and crime are still very present in Medellin today. Medellin’s transformation is far from over and a lot still has to be done. The people and the government, therefore have to keep trying to find the best ways to reach the future they’re dreaming of.

But one thing is certain: the future does not lie in the barrel of a gun. And it does not depend on an economy of narcotics. The Paisa’s will simply not tolerate that anymore. The future will be one that’s driven by love, pride and happiness. Because that’s the only future that will make sure that no child will ever have to see a drain of blood again.

On the back of my drawing, he writes: “I can see you enjoyed so much the slides. Remember this place.” 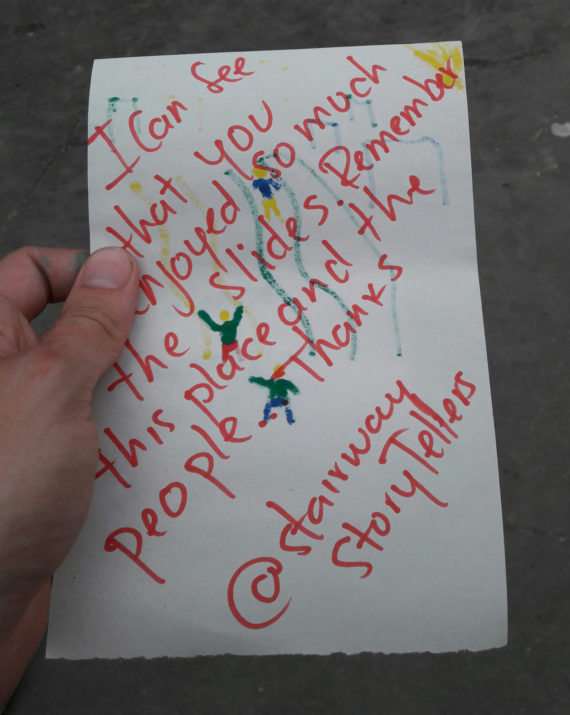 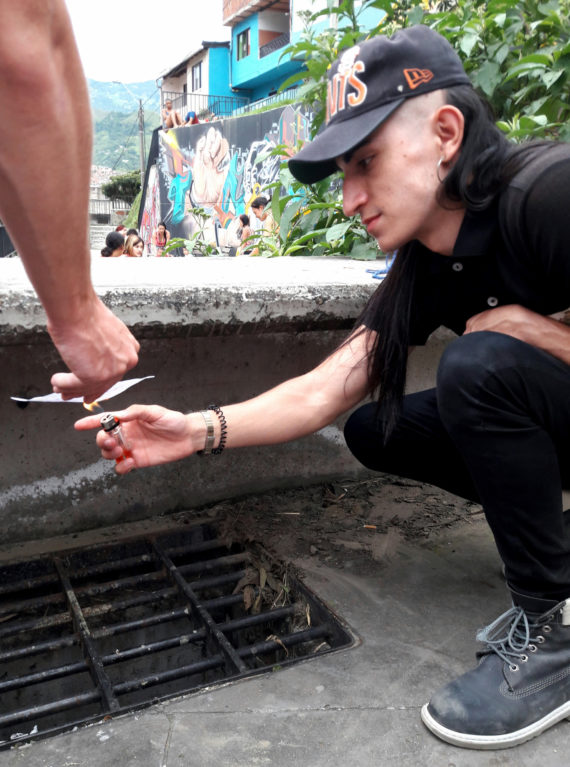