Amsterdam metro stations aren’t the most vibrant and photogenic. In my honest opinion the Amsterdam stations are grey and dull. It is mostly used by commuters and inhabitants of the city. Sometimes you’ll find a tourist, who is on it’s way outside of the city centre.

In collaboration with the public transportation company GVB and Amsterdam based Placemakers, both a design studio as collective of landscape architects & sociologists, they have given two metro stations a different look and feel. 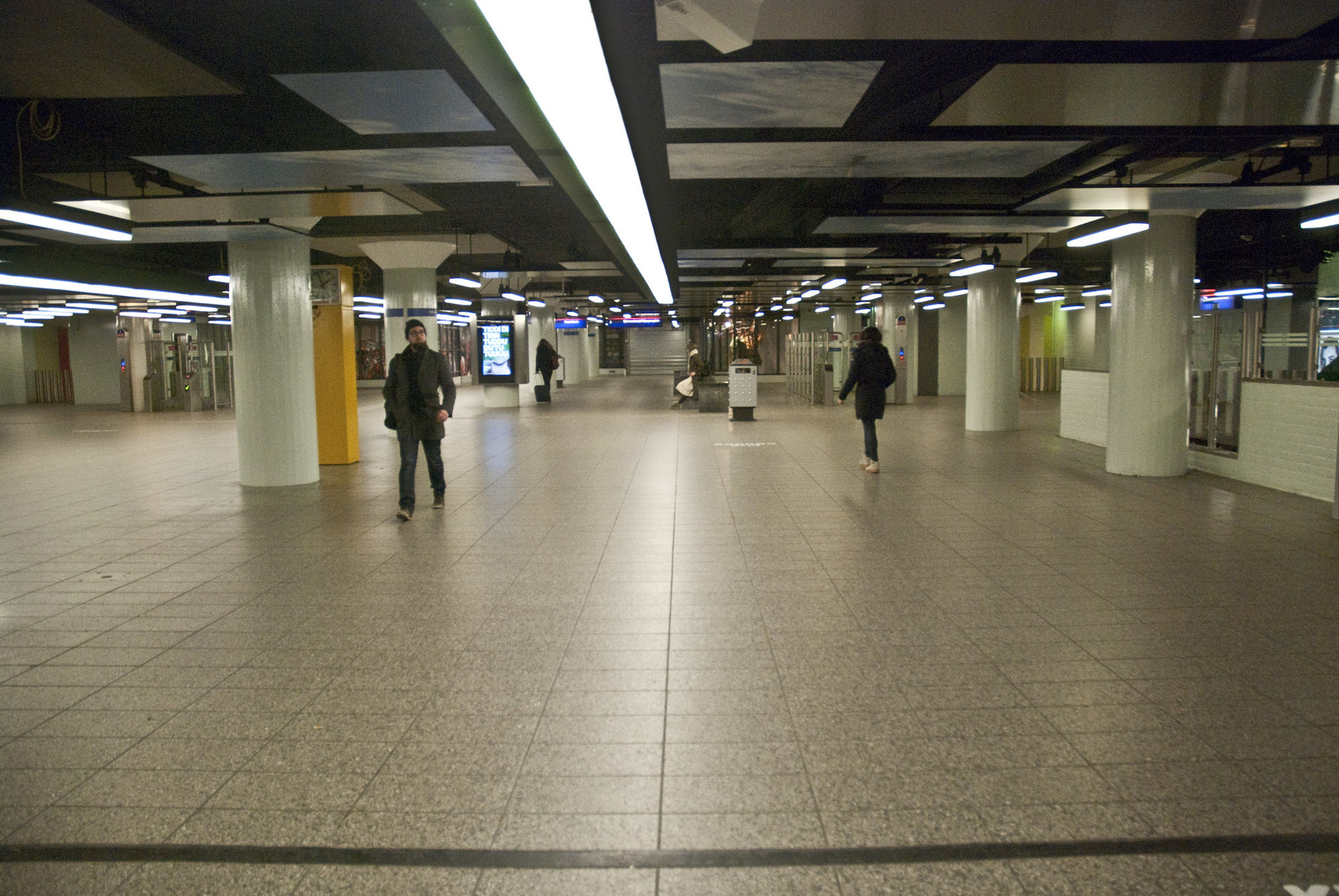 How to create more liveliness?

With a clear mission: to change the experience of metro passengers. Instead of very dull stations, there is now something to look at when arriving or departing. Bot projects, ‘Windows of Opportunity’ and ‘Weesperwolken’ are two projects inside the metro stations, that officially opened on the 25th of January.

“Before I started working at Placemakers,” so tells Anna Dekker, “we were talking to the GVB about bringing more liveliness inside these stations. And our idea was to bring the programs from the neighborhood inside the station.”

The first was Waterlooplein station, situated in a vibrant area, with opera & ballet performances, university faculties & students, museums, etc. So why not bring a performance inside the station? 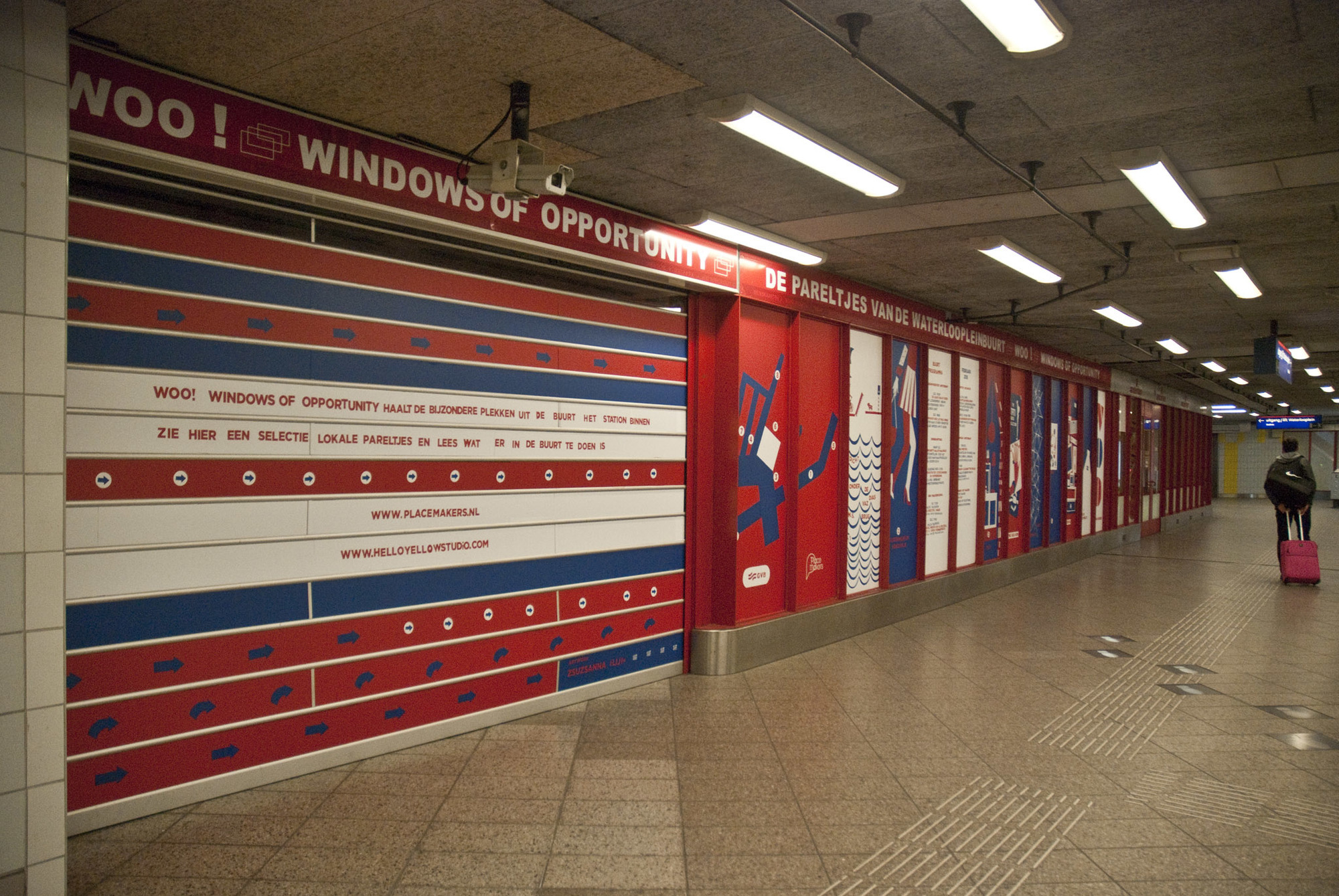 Anna was already playing around with the concept of ‘Windows of Opportunity’, using empty spaces as a platform for the neighborhood. ">“We knew that the former AKO book store at Waterlooplein was empty. It was sealed with garbage bags and really didn’t look nice at all. When walking by, it gave us a wrong impression.” Placemakers submitted the idea of ‘Windows of Opportunity’, which was well received.

With a project such as ‘Windows of Opportunity’, Placemakers were searching for hidden gems from the neighborhood. Anna: “We went inside local shops and asked about it. We asked people on the street. We rang doorbells at the residents homes and asked them to nominate a hidden gem. What we got were a lot of stories from the neighborhood and places we didn’t know of its existence.” 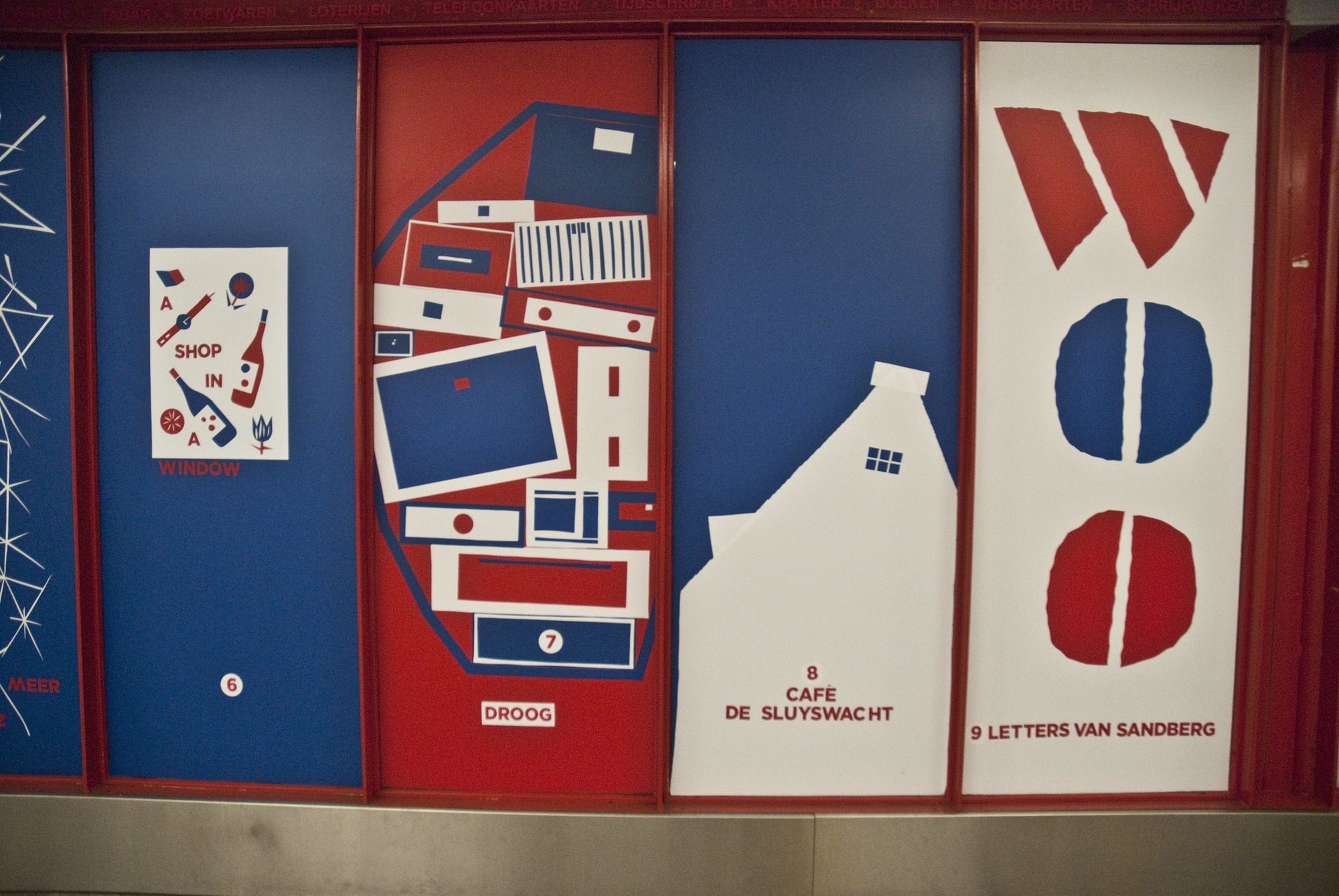 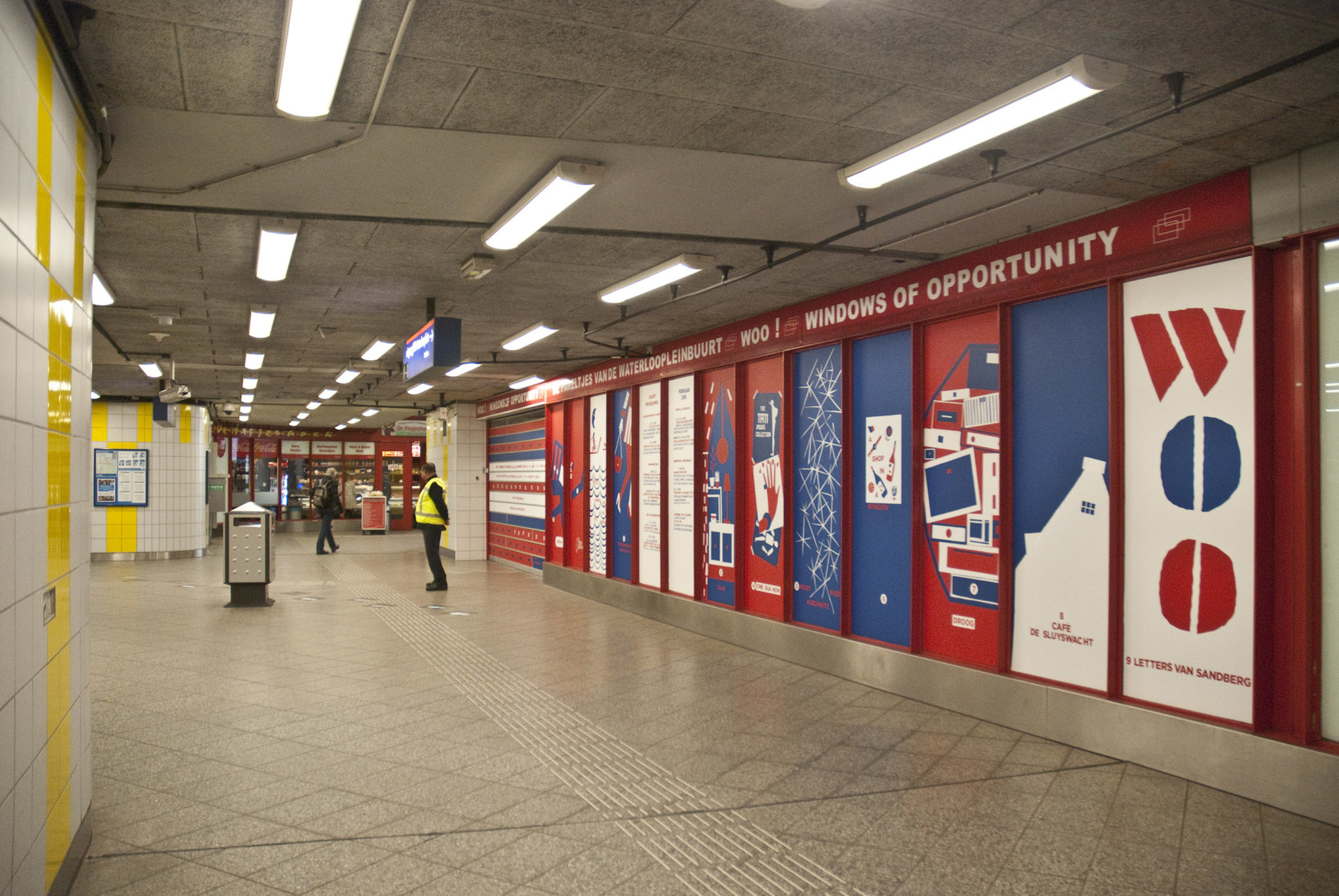 A selection was made and local institutions were asked if they were willing to communicate their program on the windows. Every month a new program had been made visible, but the hidden gems are constant. 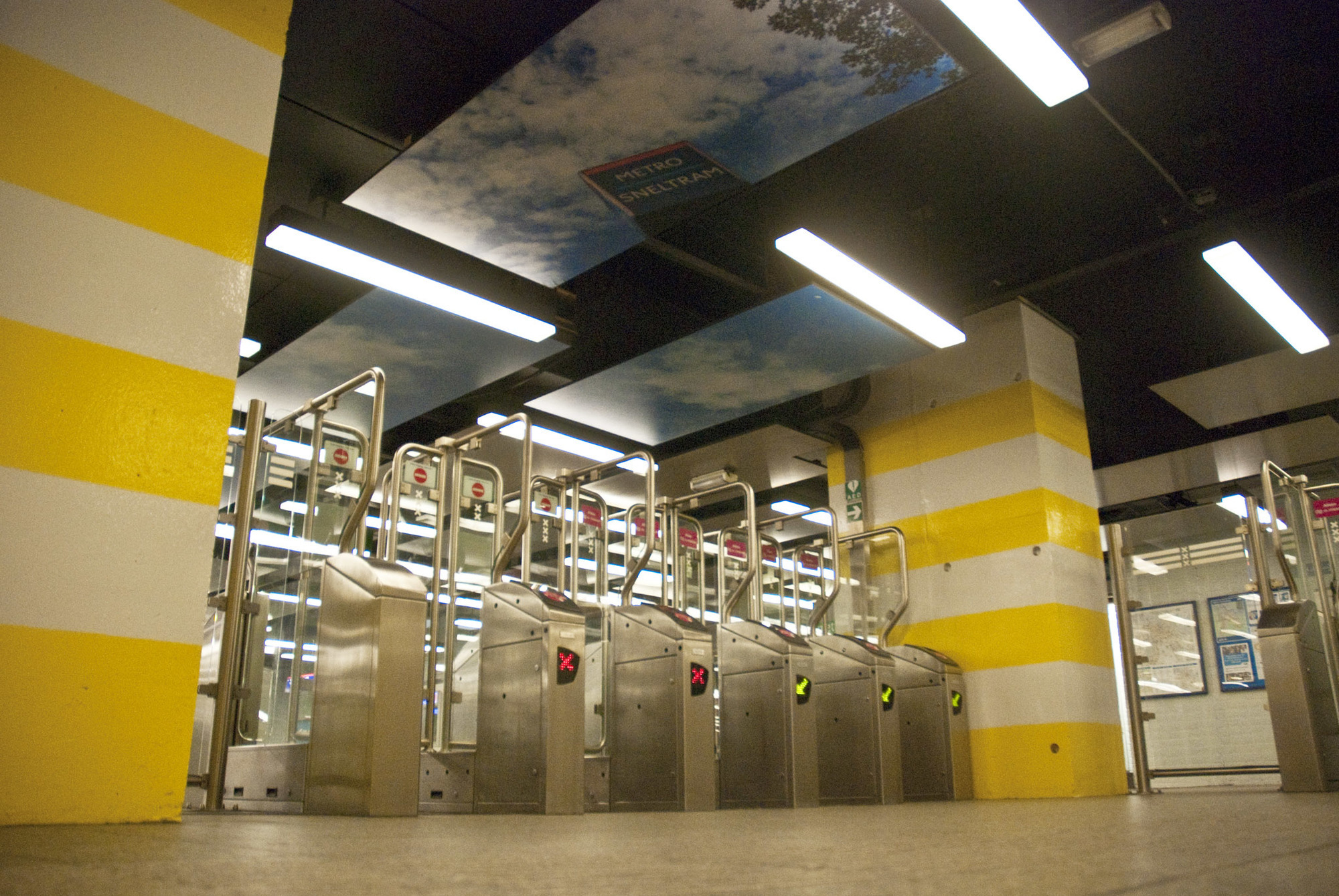 Next in line was coming up with an idea for Weesperplein station. The question here: “Could you also do something with the tables inside Weesperplein station? Anna: “Our first thought was: which tables? I went to Weesperplein station and looked up to the ceiling and a saw the panels. I didn’t know those panels were tables. Apparently they were once used for the (bomb)shelters beneath the station.”

Placemakers has a large network of designers they work with on various projects. They submitted six ideas and the idea of ‘Weesperwolken’ was rewarded as the best idea.

Via via they heard that photographer Roderik Rotting had photographed clouds as part of his graduation. “He is fascinated by clouds and air,“ explains Anna, “In the Summer we covered the area directly above the metro station and photographed the sky/clouds outside of the station. On the photo’s you don’t only see clouds, but also edges of buildings and tram cables.” 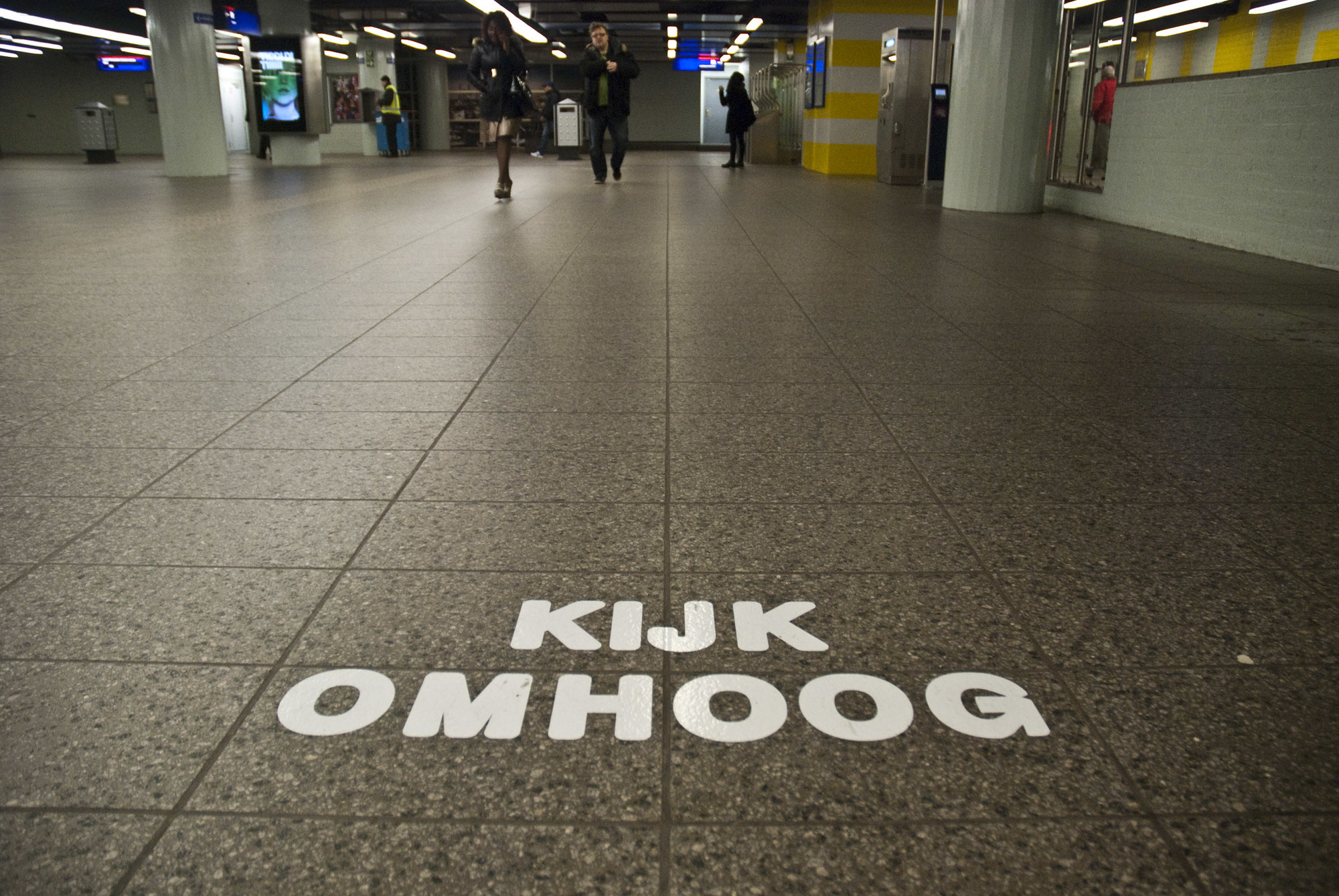 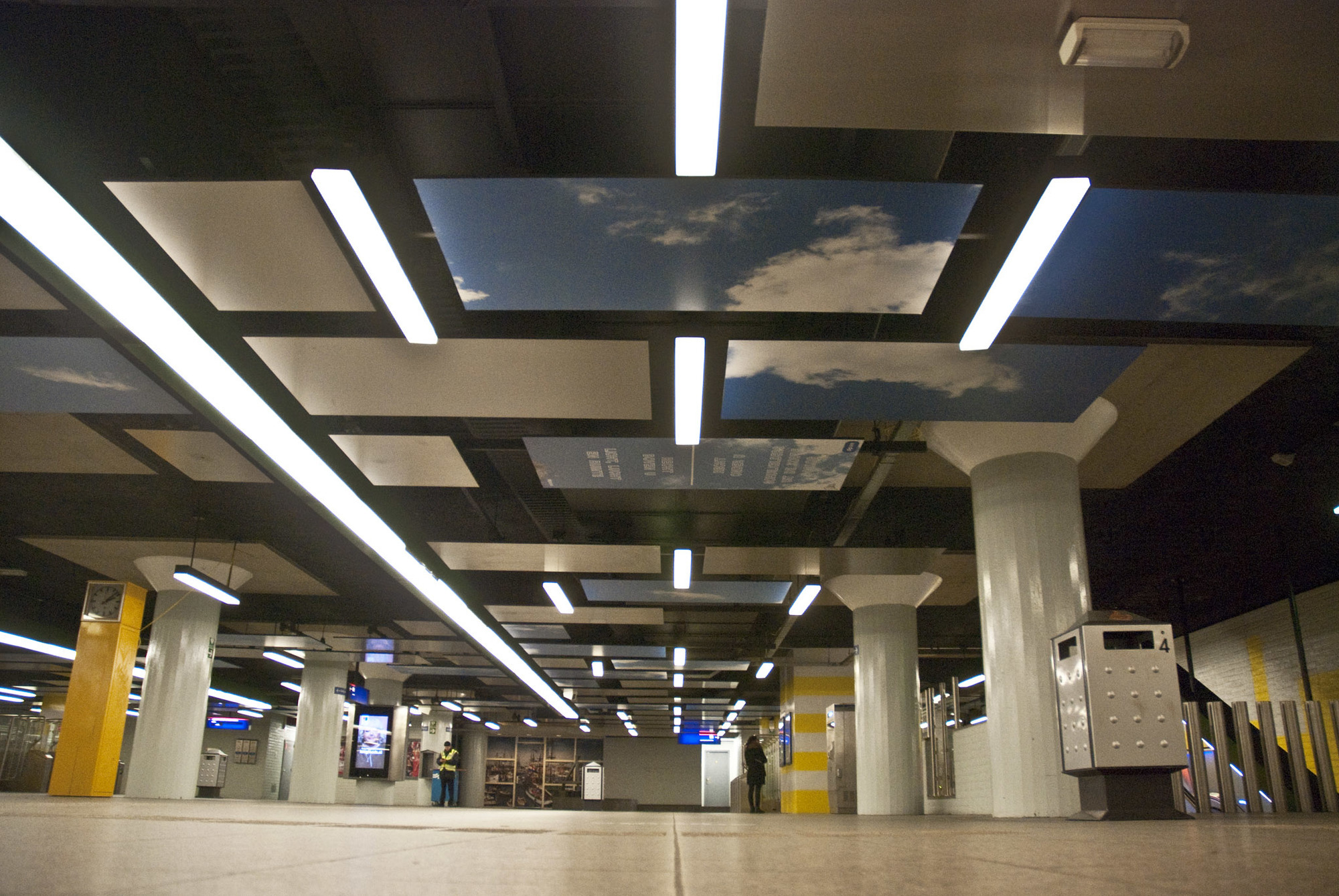 ‘Windows of Opportunity’ and ‘Weesperwolken’ are two projects with a mission to bring what is above ground to below rground. Both stay visible until October. After that rebuilding of both stations will begin and the former AKO book shop will disappear.

For any artist or nearby institution it is a great opportunity to show their art and program for ten months inside a station with thousands of metro passengers passing by each day. For those who use the stations on a regular basis, it is much nicer now to arrive and depart at and from a livelier station.

Anna Dekker (Placemakers), thanks for your time talking about both projects.