Rotterdam’s Hofbogen is a testament to the city’s survivalist spirit.

One hundred years ago these tracks were home to the Rotterdam and The Hague elite, out for a trip to the seaside or a night on the town. These days, the big-skirted ladies have made way for bearded beer aficionados and coffee-loving bicycle enthusiasts. And there’s even talk of a Rotterdam version of New York’s famous High Line. Welcome to the Hofbogen!

The two kilometers of elevated railway tracks stretch all the way from Rotterdam Central Station to the northern edge of the city. Built between 1904 and 1908, the Hofbogen were the first part of a 28 kilometer railway line to Scheveningen, the beachside neighborhood of The Hague.

"At the time, the area around the Hofbogen was a pretty shabby, no-go area. We wanted to make something of the place,” Addy van der Knaap, director of Hofbogen

The main station of the line was a decadent art nouveau building designed by renowned Rotterdam architect Jacobus Pieter Stok. The building was a perfect reflection of its visitors: rich ladies and gentlemen from The Hague, or elite Rotterdammers heading out for a day at the beach. Much like many of the city’s architectural gems, however, the grand main hall was destroyed during the bombings in 1940, and the railway line started a slow transition into urban decay. 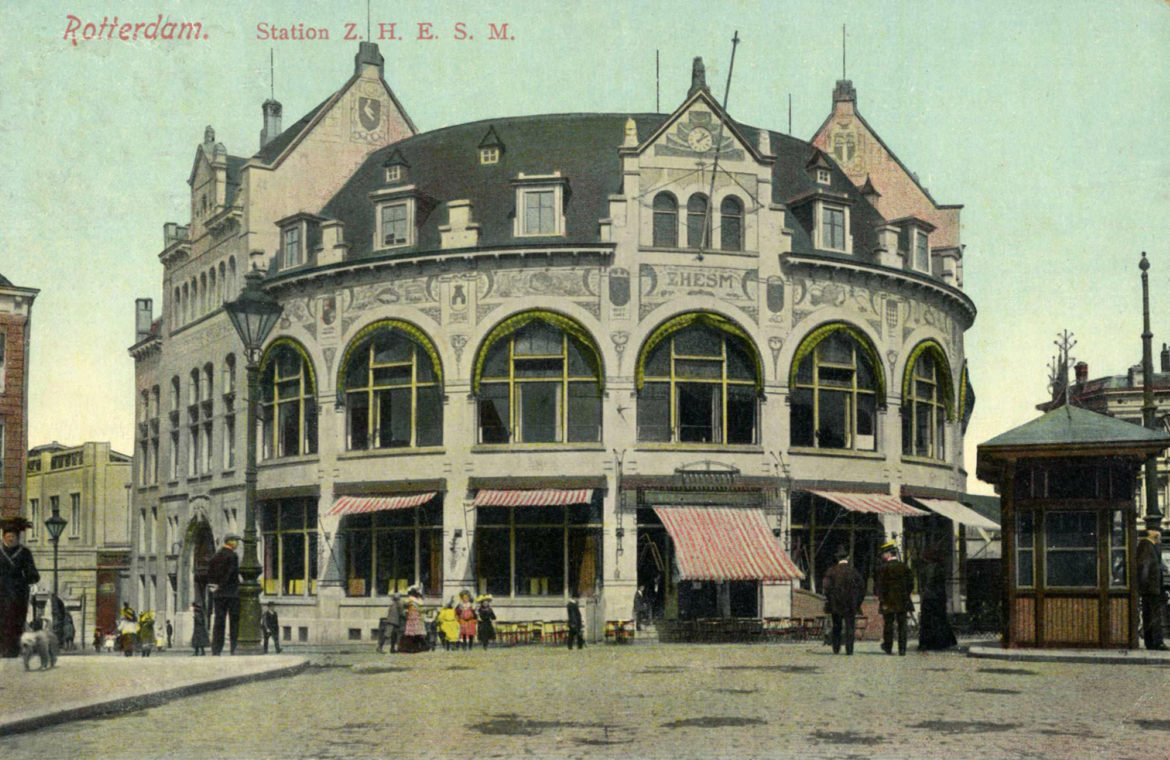 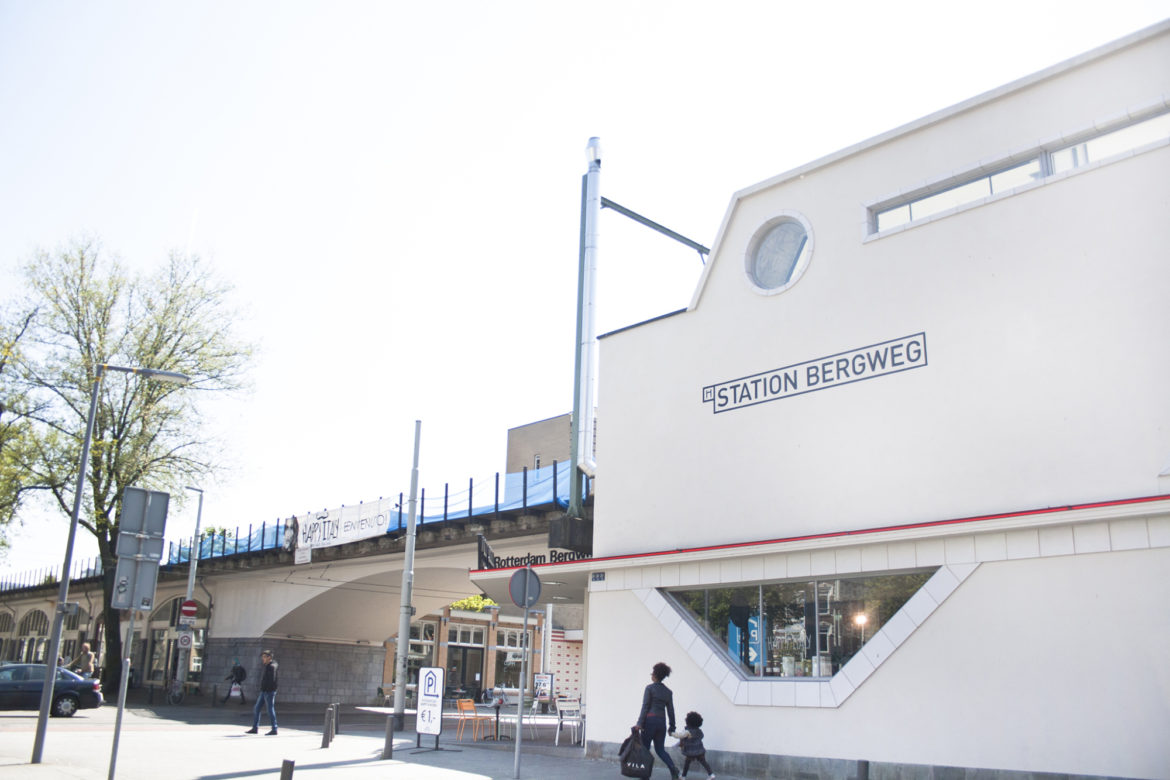 On Monday, August 16 2010, the last train left the Hofplein station. But long before that, a group of people decided to save the elevated railway tracks and restore their former glory by giving them a new purpose. Hofbogen B.V. is an organization consisting of two different shareholders with a communal goal: to give the neighborhood a well-needed boost and turn the Hofbogen into a hub of urban creativity.

“Hofbogen started about ten years ago, and we bought the old railway overpass in 2006 when it was still being used as an actual railway. At the time, the area around the Hofbogen was a pretty shabby, no-go area. We wanted to make something of the place,” Addy van der Knaap, director of Hofbogen, explains. 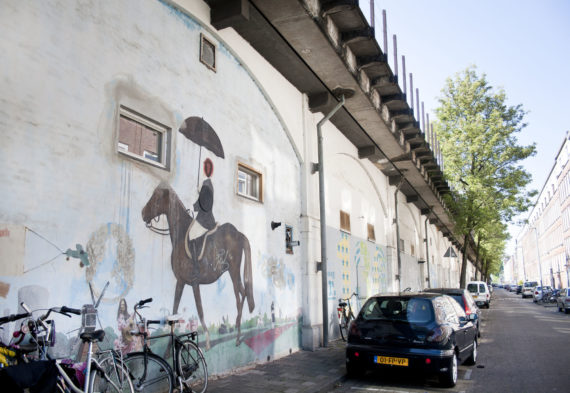 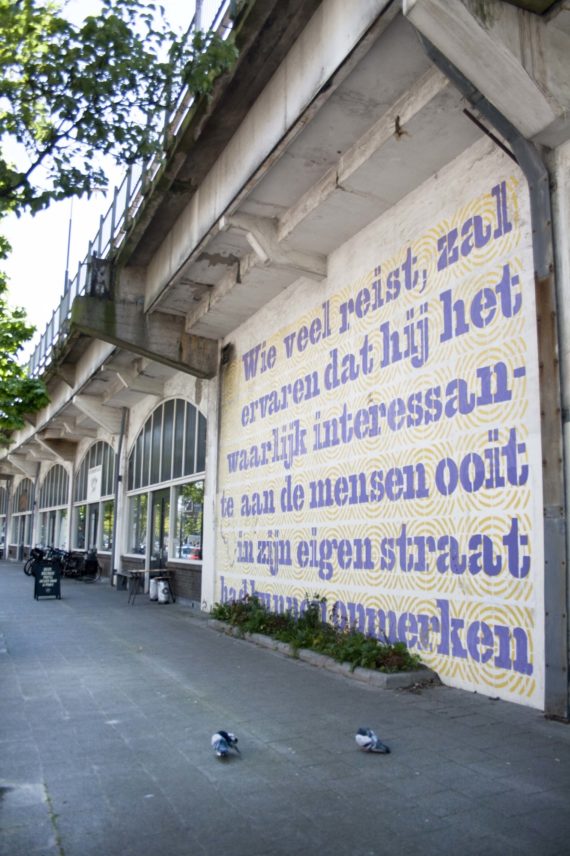 “We started with the first seven arches at Station Hofplein, the ones closest to the city center. We wanted to attract creative, pioneering entrepreneurs; the first ones were people like North Sea Design, Lokaal, and BIRD . Right from the start, we wanted to put a focus on creative craftsmanship in every sense of the word,” adds Gijs van der Kleij, transformation process manager at the Hofbogen.

In 2013, more arches were restored, all the way to Station Bergweg, now a hub of activity thanks to hotspots like Urban Bakery, Mad About Malt, and COPPI. 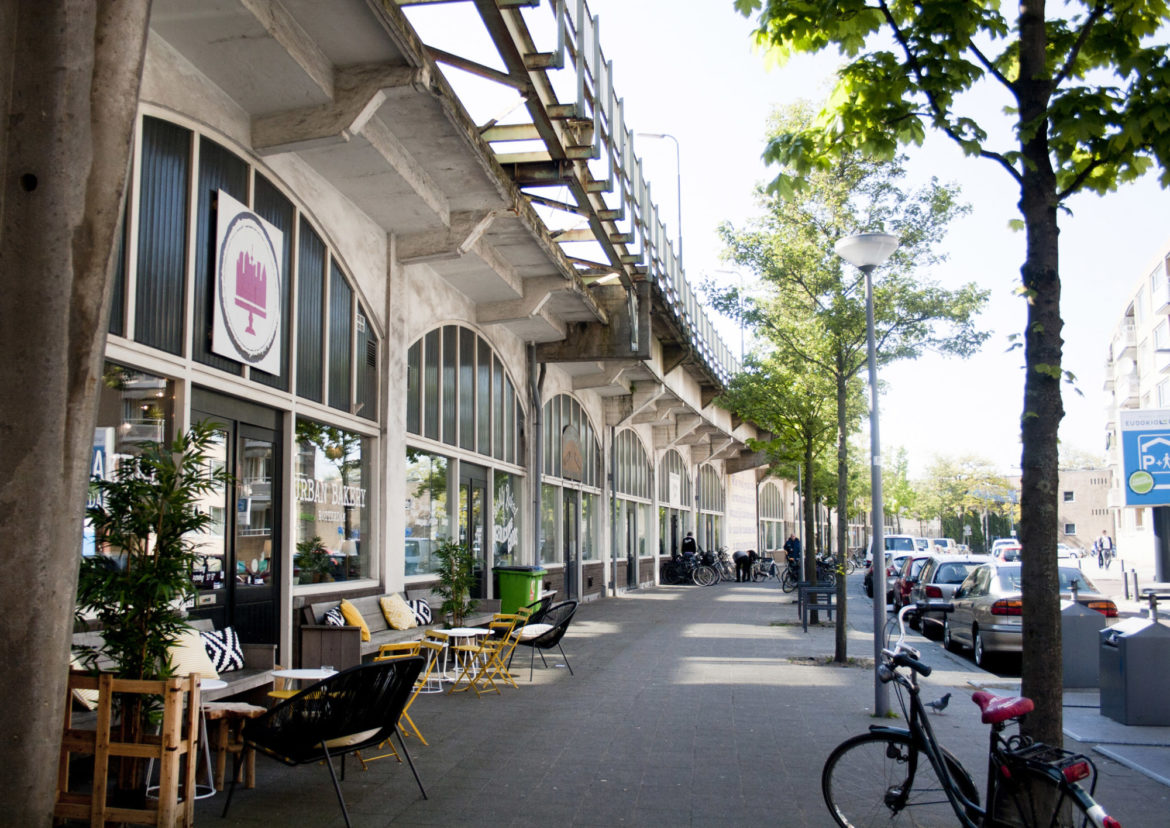 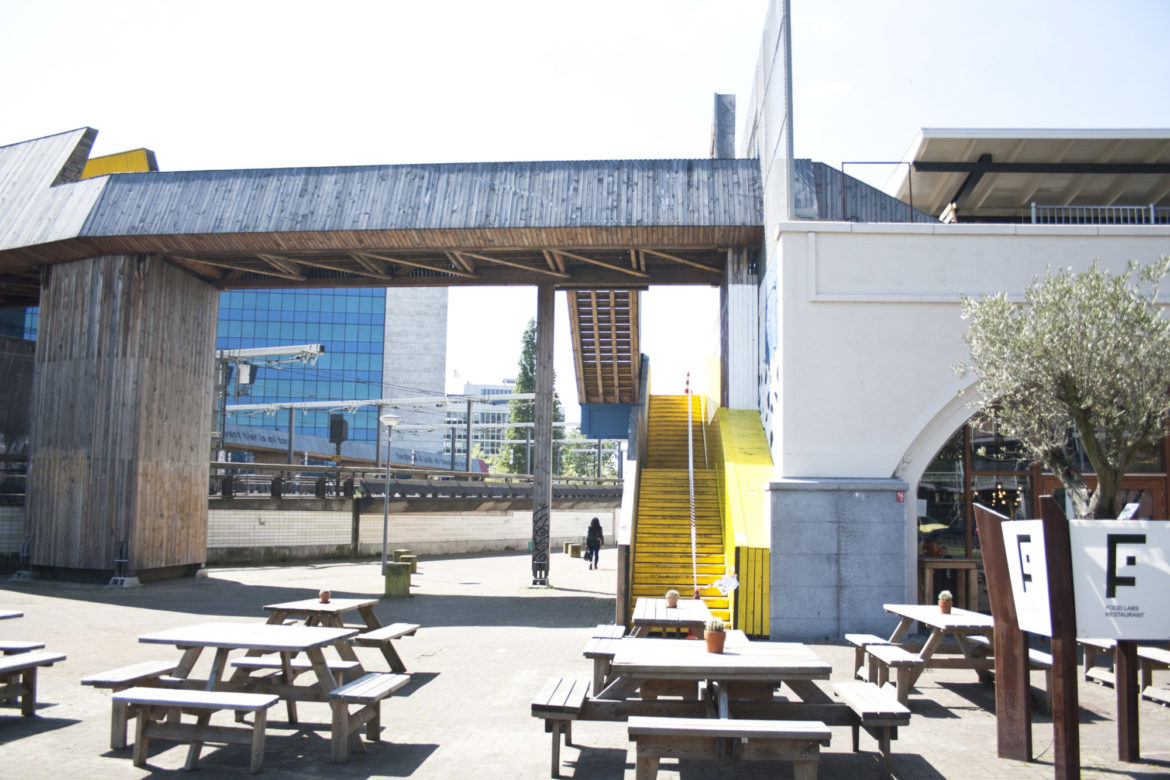 Walking along the Hofbogen from Station Hofplein to Station Bergweg, you will pass a pleasantly diverse mix of stores, cafés, and local businesses. You might start with spending a few minutes admiring the murals at Station Hofplein, courtesy of Opperclaes and their revolving roster of artists.

A delicious breakfast at Esto Food & Drinks will prepare you for a stroll past the arches in the Zomerhofkwartier. Gawk at the beautiful industrial lamps at Lloyd Industrials, browse through old records at De Oorzaak, or catch a glimpse of the dancers at Het Danskantoor.

“It’s a typical Rotterdam trait to be skeptical. They’re very much an ‘I’ll believe it when I see it” crowd. But once they started see the success and benefits of the Hofbogen, everyone was on board,” Gijs laughs.

You can grab a coffee at the famous Man Met Bril Koffie, enjoy a quick lunch at Happy Italy, and continue walking past Station Bergweg for more interesting murals. Getting tired? Head back and put your feet up at Eurotrash Brewery, a new craft beer bar created by artist duo Arno Coenen and Iris Roskam, known for their creative works at Markthal Rotterdam And if you want to continue your day far into the night, you just might find a festival on top of the roof at Station Hofplein. 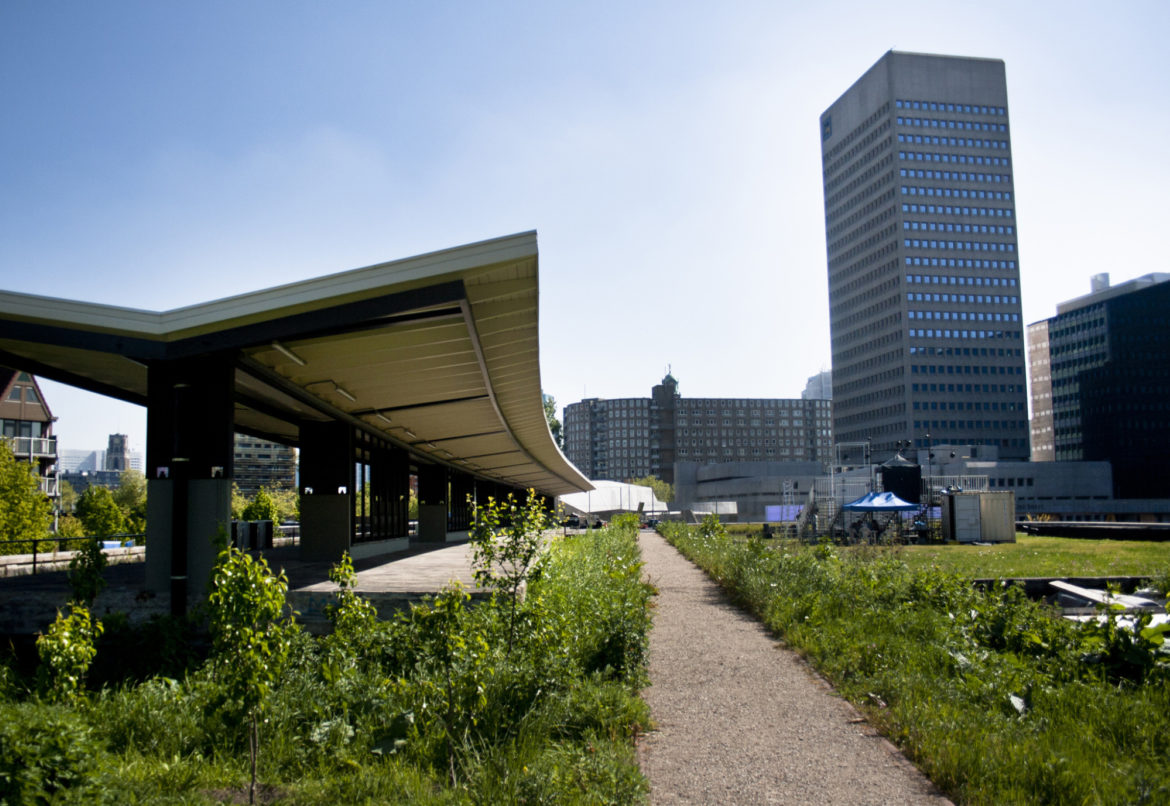 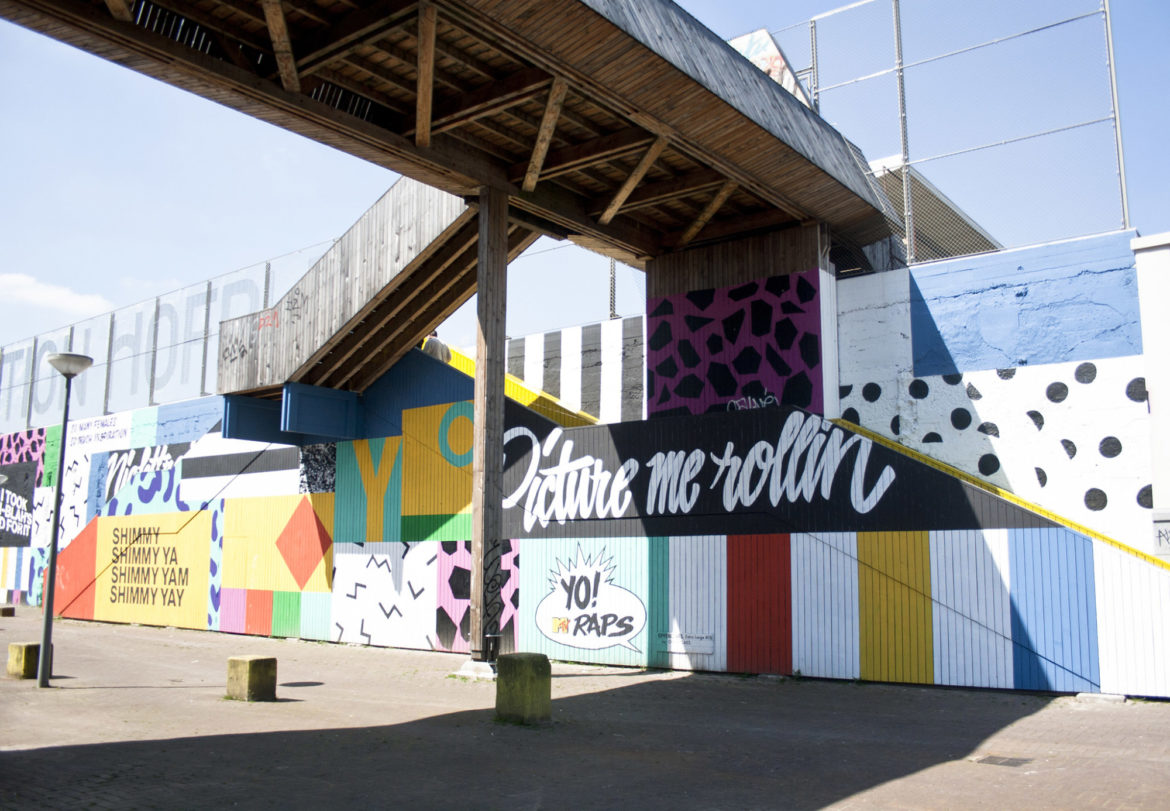 “There’s so much happening on that roof these days,” adds Judith Blenke, marketing consultant at Hofbogen. “There’s Roffa Mon Amour, a lovely film festival, and RYPP, a wine festival. And of course the Urban Picnic during Rotterdamse Dakendagen. The program is so diverse, and there’s something on almost every weekend this summer.”

“The entrepreneurs that rent the arches are also diverse, and complement one another. Our real estate agent Ronald Bijsterveld always makes sure there’s a good and interesting mix of businesses and initiatives. We try to keep a good balance between old and new initiatives, creative craftsmen and cafes and restaurants.”

“We want everyone to be able to enjoy the Hofbogen, from neighborhood locals to tourists,” Gijs explains. ​

With the pros and cons of gentrification echoing all around the city, one might wonder whether the development of the Hofbogen is really beneficial to everyone in the neighborhood. But Addy and Gijs are adamant: The Hofbogen cater to everyone, and the organization will make sure it continues to do so.

“Sure, you can grab a fancy coffee at Man met Bril, but you can also grab a good ol’ everyday black coffee at Eurotrash. And speaking of Man met Bril, the owner recently started an initiative that teaches local community college students the craft of coffee. He rented out an arch next to the café to set this all up. How great is that?” Addy adds.

“It’s a typical Rotterdam trait to be skeptical. They’re very much an ‘I’ll believe it when I see it” crowd. But once they started seeing the success and benefits of the Hofbogen, everyone was on board,” Gijs laughs. 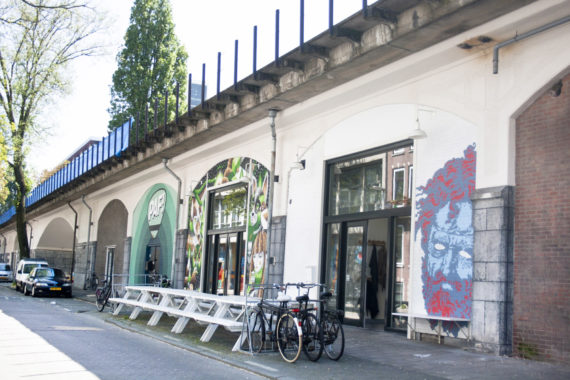 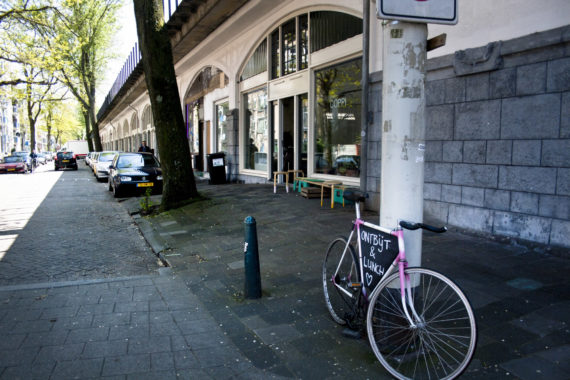 Recently, the Rotterdam rumor mill started spinning with tales of a public park on the roof of the Hofbogen, one to rival its New York inspiration, the High Line. But for now, these plans remain just that. Plans. Albeit ones everyone would like to see realized.

“It was a big part of our vision right from the start. Everyone wants that park! But it’s complicated. Since it used to be a railway, ProRail, the government railroad agency, owns the roof. We only own whatever’s underneath, and as a daughter company of two housing corporations, the activities of the Hofbogen no longer belong to our core business. So for that Rotterdam High Line to become a reality, we’d have to hand over both our part and ProRail’s part to one organization,” Addy explains. 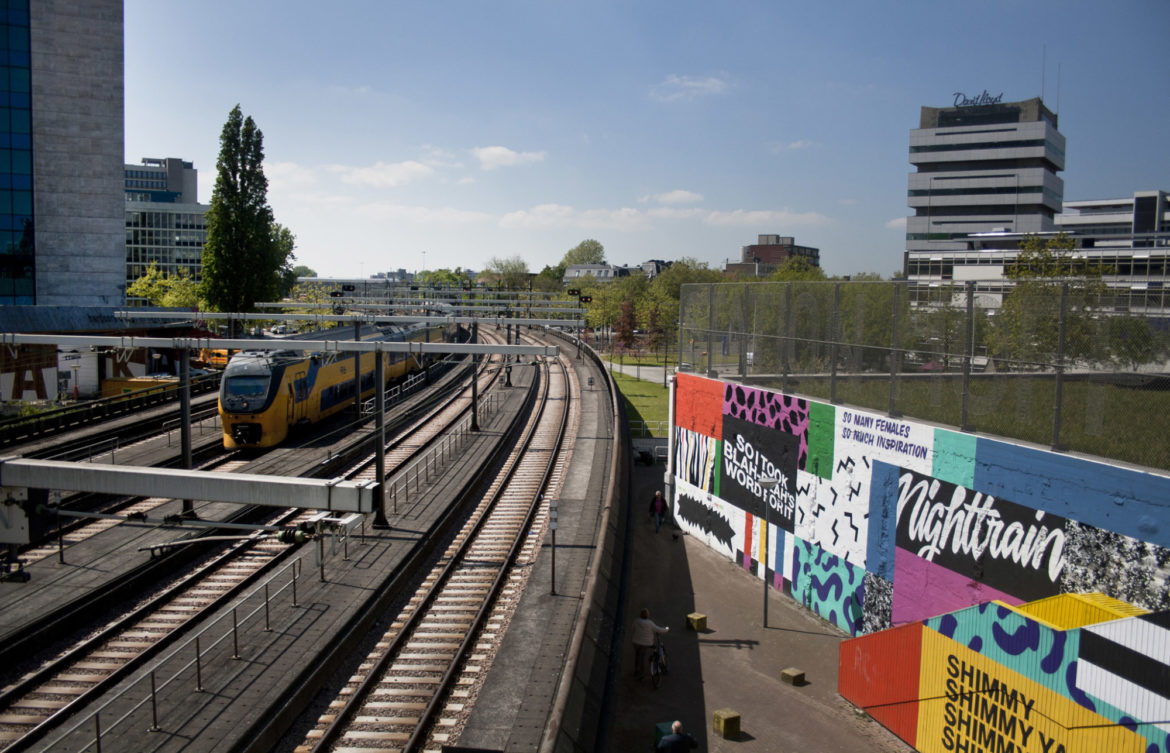 But for those who can’t wait for those developments, the roof of Station Hofplein is already being transformed into a rooftop park and will open to the public sometime in 2018.

As for the rest of the park- anyone with a good plan, a big bank account, and a creative vision is welcome to come take a look at the happenings at the Hofbogen and get involved.

Thanks so much to Addy, Gijs and Judith for telling us about your endeavors! If you want to visit the Hofbogen or stay up to date on the latest developments, take a look at their website, or follow them on Facebook.