Still living in the Amsterdam School

Most people, when they think of Amsterdam’s architecture, picture the dolls’ houses of the canals and the grandeur of the Dutch Golden Age. But only 100 years ago another Dutch design movement left its unmistakable signature on the city. I went out to discover the Amsterdam School’s marks in my ‘hood.

A few weeks ago I visited the Stedelijk Museum for a peek at the ‘Wonen in de Amsterdamse School’ (Living in the Amsterdam School) exhibition. The collection of interior curiosities including furniture, lamps, clocks, ceramics, textiles, and graphics gave me real sense of how life in Amsterdam looked in the early part of the 20th century. At a time when socialist sentiments were gaining momentum and World War I was on the horizon, delightfully anti-rational design prevailed. The Amsterdam School, which belonged to a broader global movement that included the French Art Deco, was best known for undulating brick façades, decorative masonry and sculptural ironwork that adorns many of the city’s famous bridges. 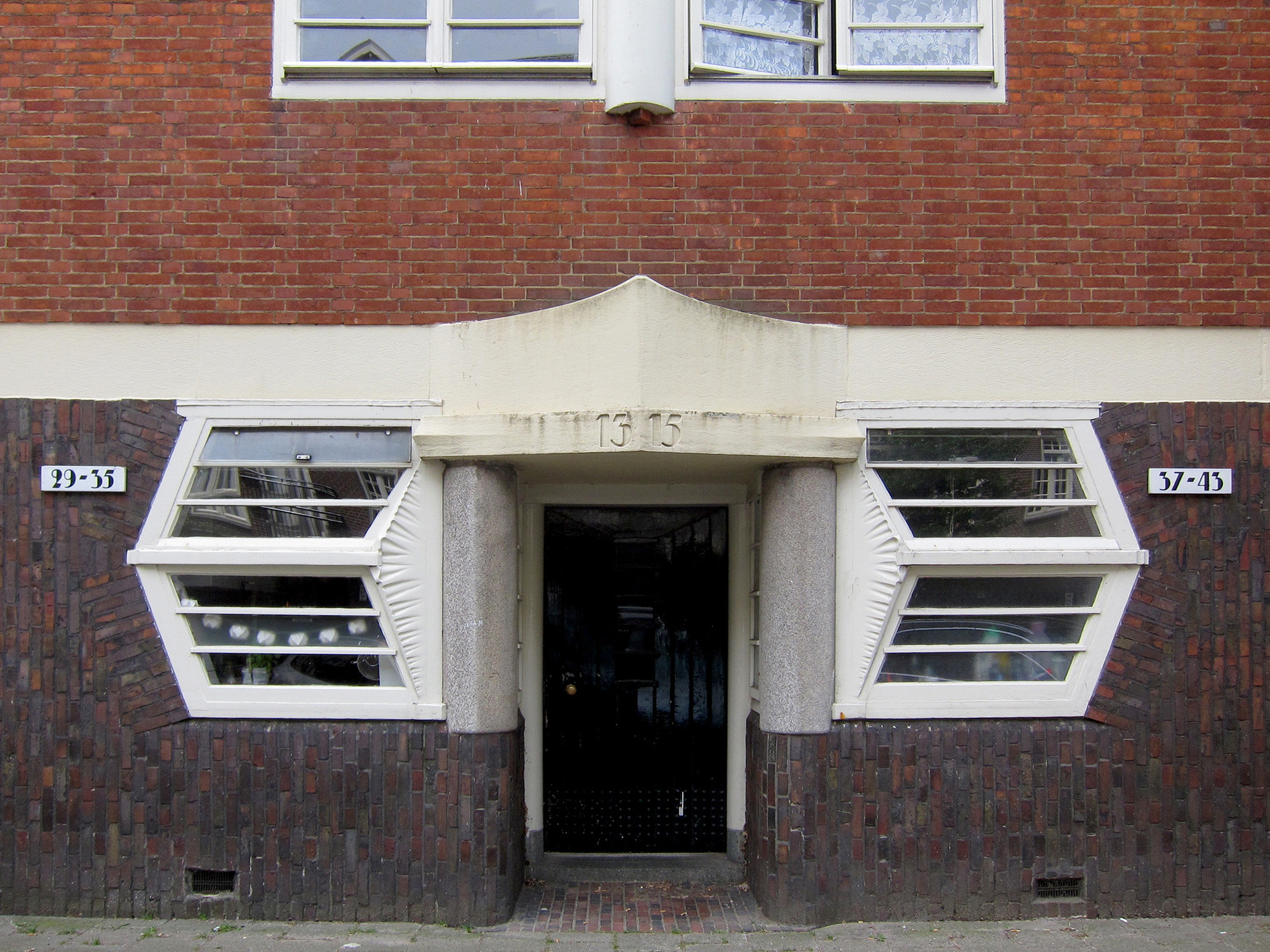 Around Amsterdam West you can see many examples of residential apartment blocks that were designed to give the poor working class families dignified, spacious and decorative homes. Sculptural brick-work, unusual window frames and fancy numerals adorn many a side-street façade in the area. 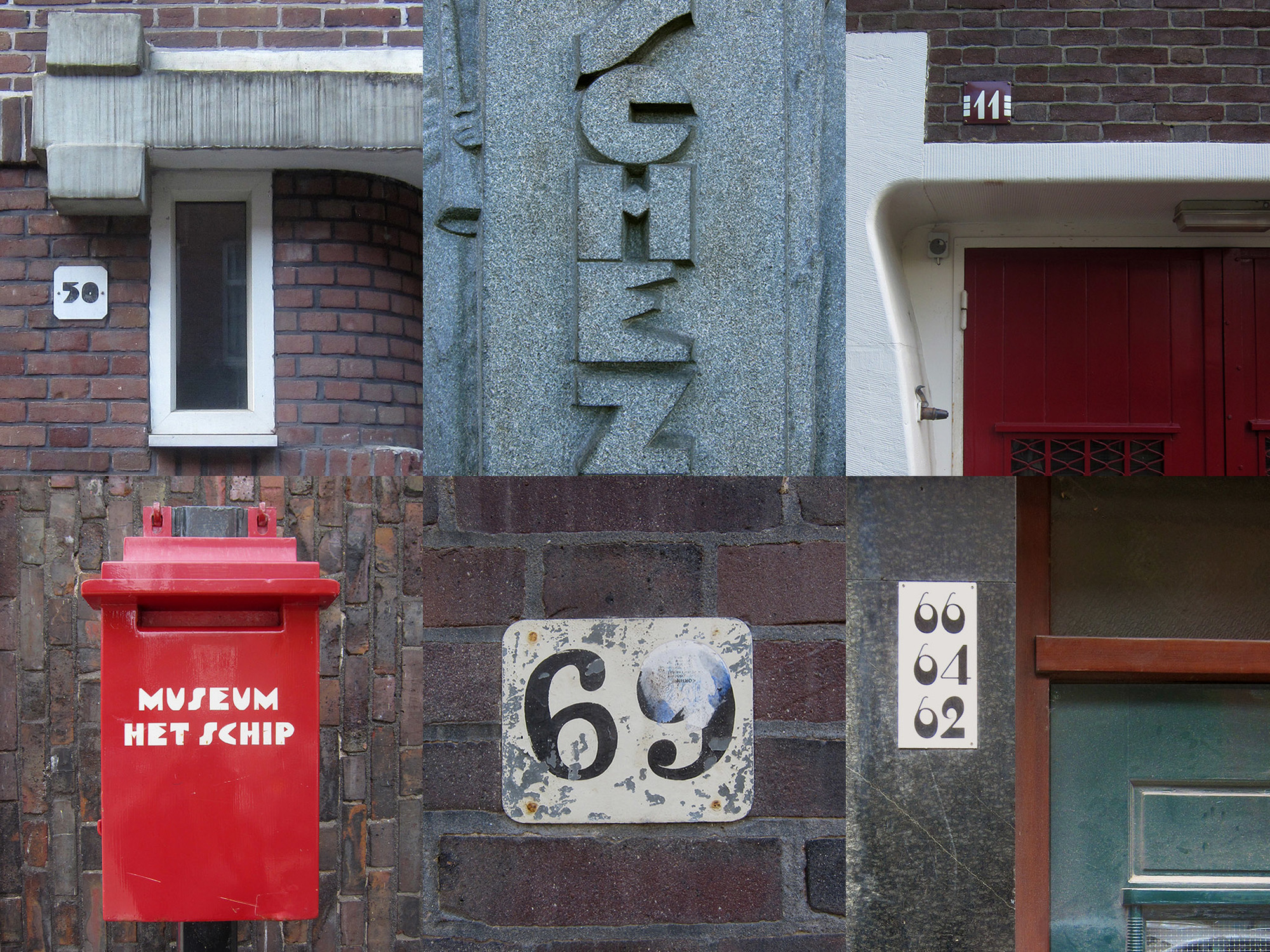 Decorative typography, often used for house numbers, is usually a good indication that you’re looking at an Amsterdam School-era building. 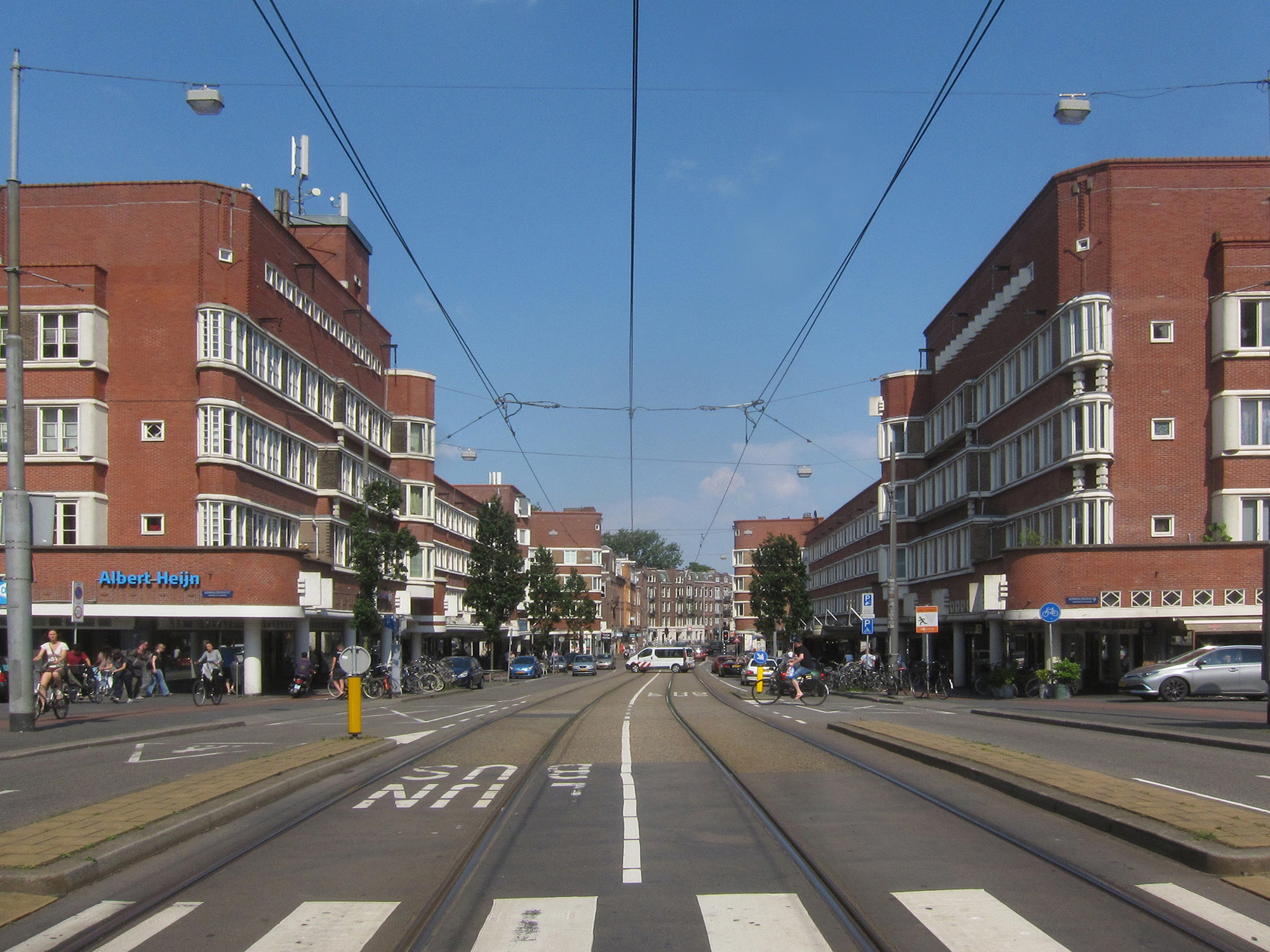 Once you open your eyes to the characteristic façades of the Amsterdam School, you’ll be seeing it everywhere you turn. Next thing you know, your local Albert Heijn turns out to be housed in a landmark building! 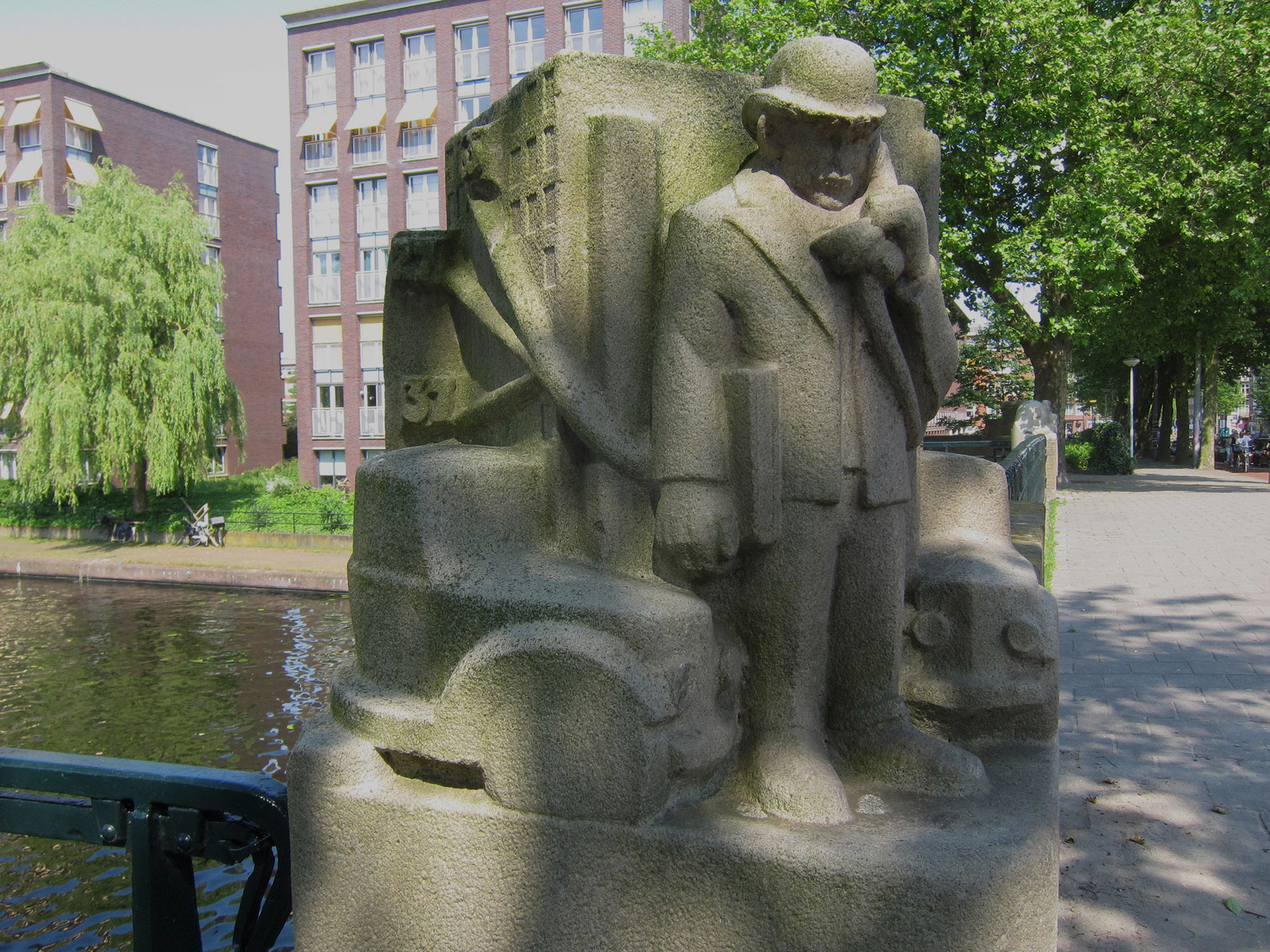 I love this bridge ornament by Hildo Krop, the most well-known sculptor of the movement. His expressive figures and scenes adorned many buildings and bridges, like this one at the Jan van Galenstraat / Admiralengracht.

Stained glass was popular for both interiors and exteriors of the era, adding to the rich and colourful palette. 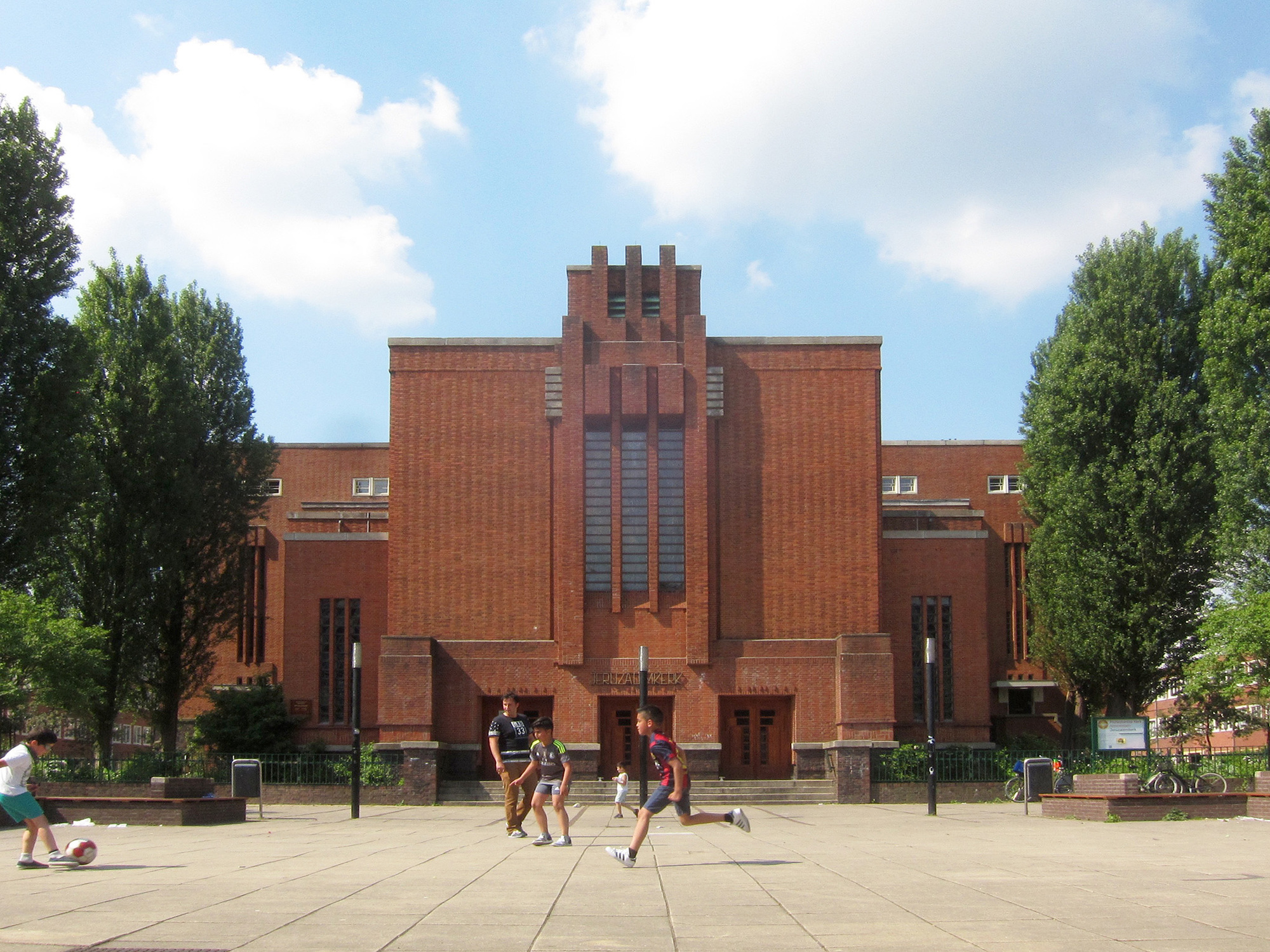 Discovery of the day was the magnificent Jeruzalemkerk, designed by Ferdinand B. Jantzen and opened in 1929. It is the only church of the Amsterdam School that is still fully intact and fully representative of the movement’s aesthetic. The perfect symmetry of the building, the brick and glass work of the exterior and the ironwork typography above the main entrance are all beautiful examples. 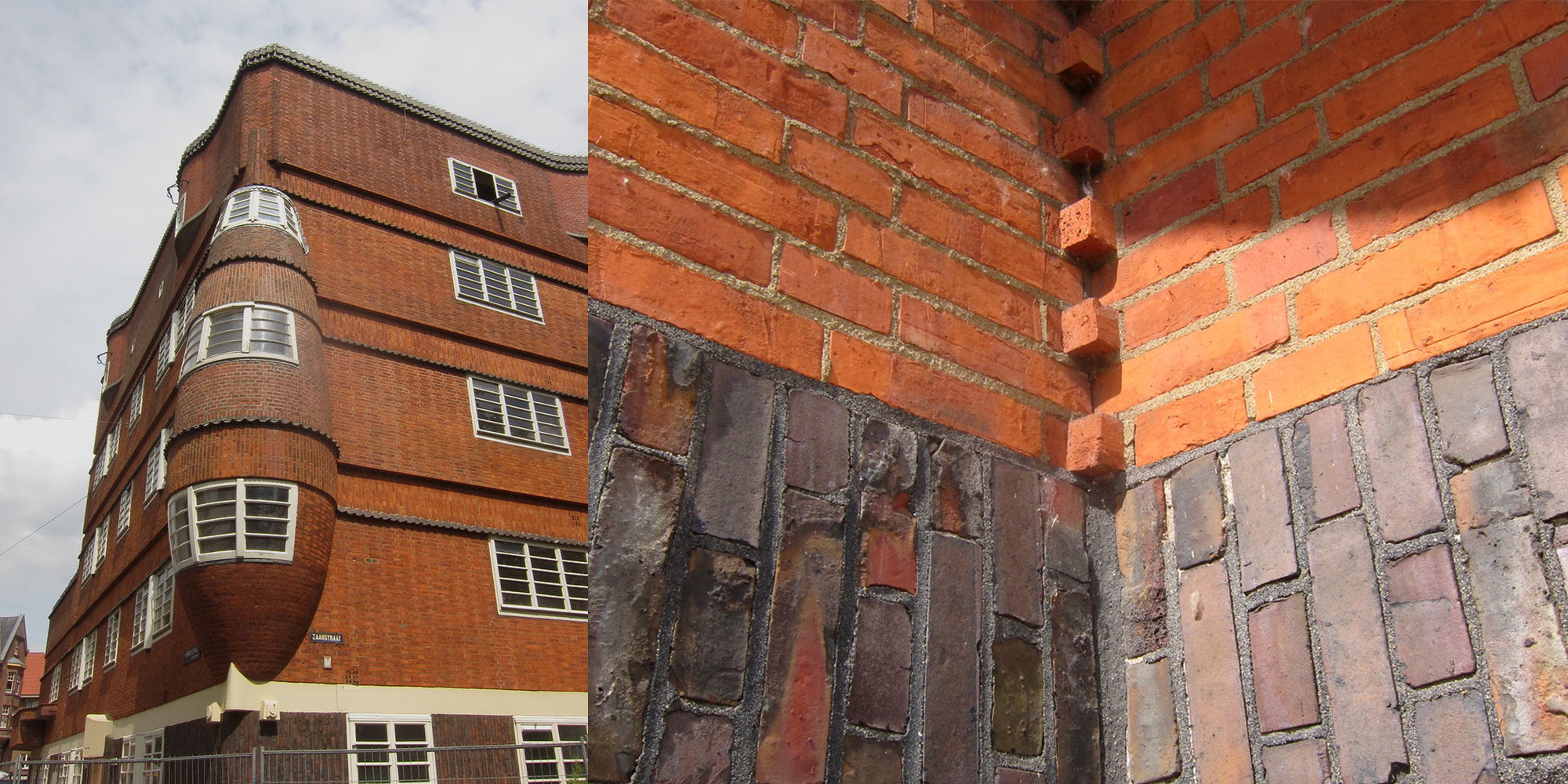 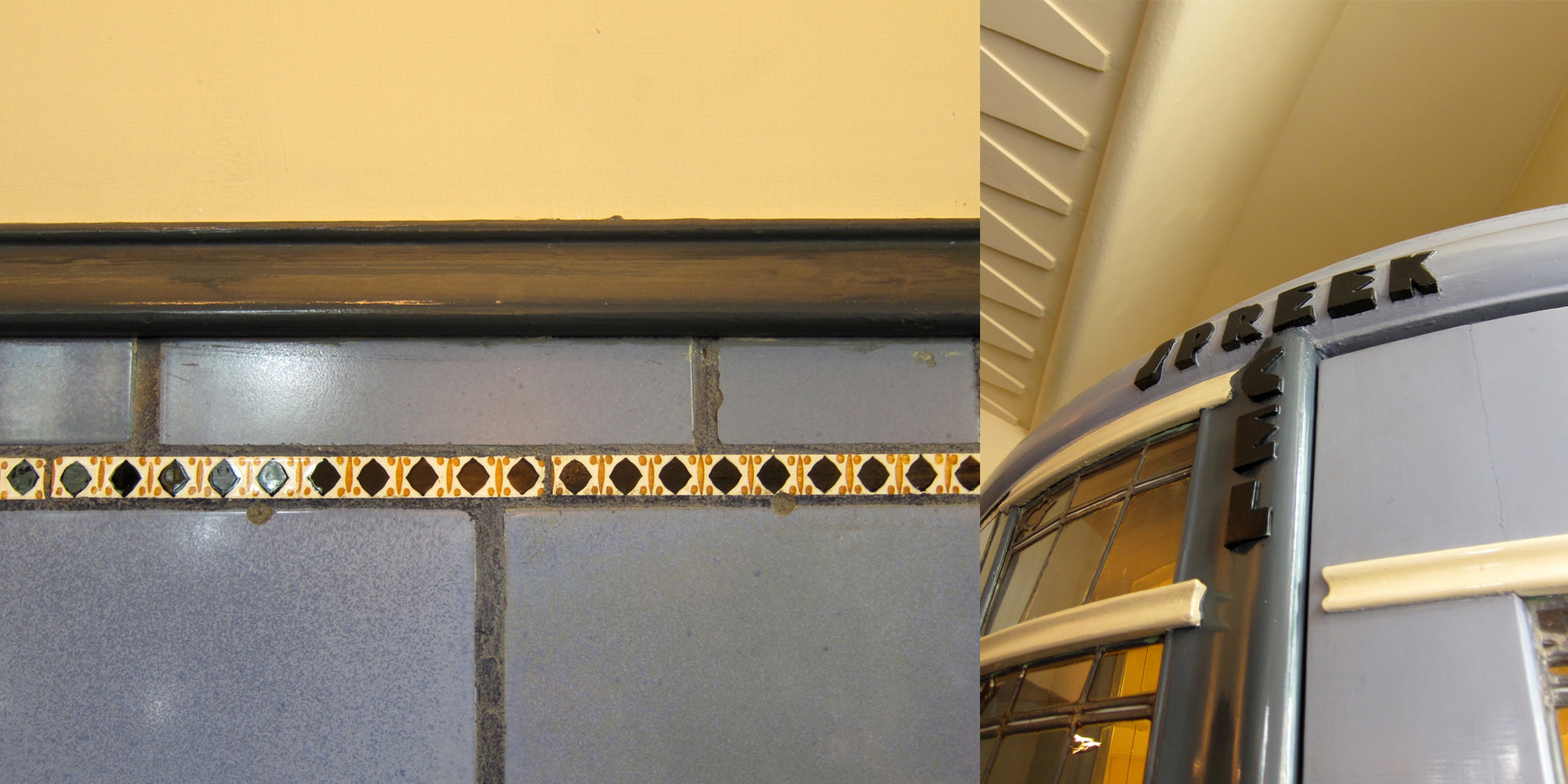 A little further afield is Museum Het Schip, designed by Michel de Klerk, another gorgeous example of the almost non-sensical decorative antics used by architects of the Amsterdam School. Daily tours of the social housing project shine a light on many interior and exterior design elements and give context within the surrounding neighbourhood. 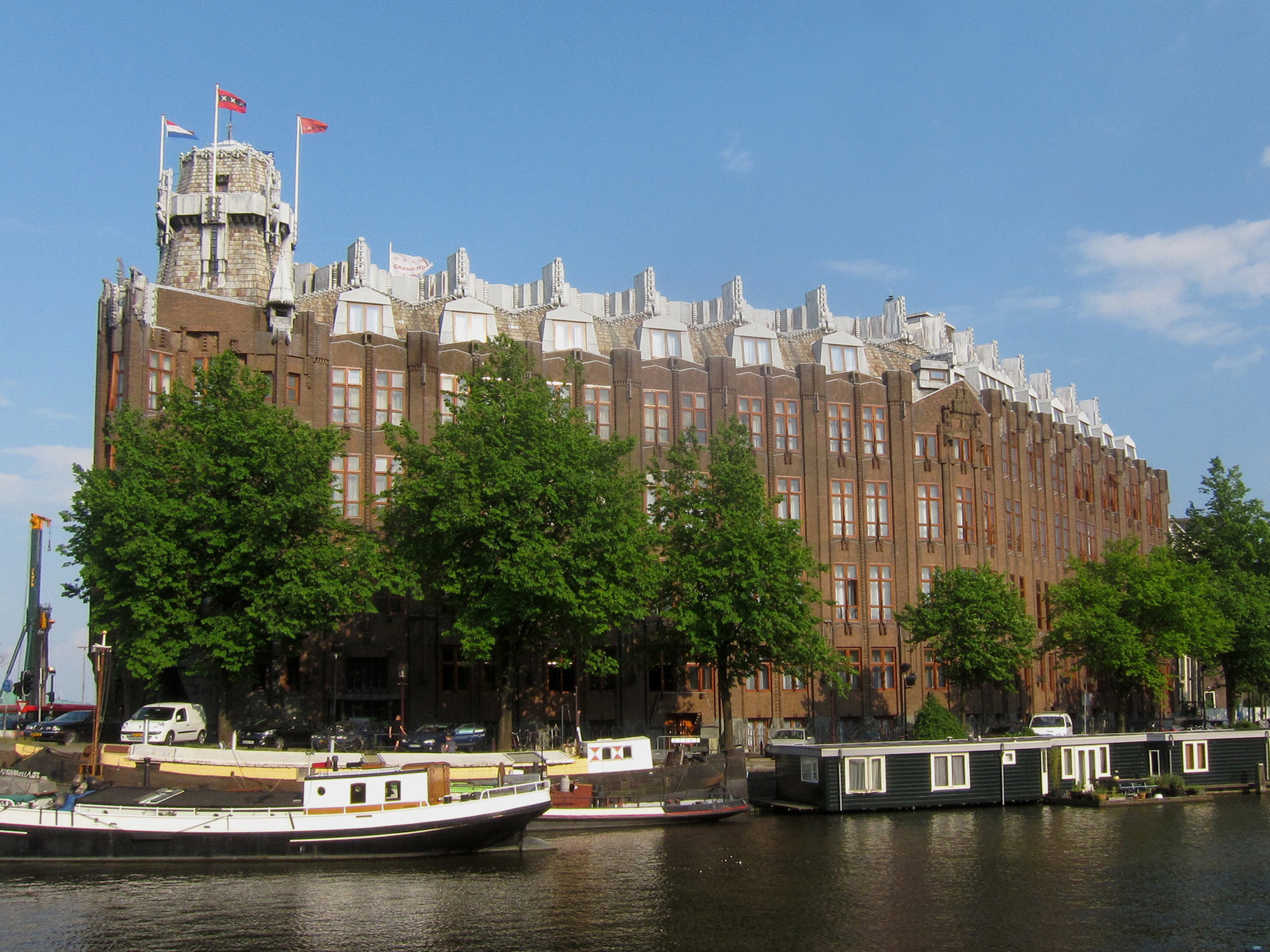 Once I got started I couldn’t stop! So I also made a stop at the Grand Hotel Amrath, whose heavily embellished façade shows so many examples of detailed masonry and ironwork that I could easily make another photo essay just about this one building. Close by Amsterdam Central Station, it’s a must-see when visiting the city… just don’t forget to look up!