Welcome to Bos en Lommer aka BoLo! An upcoming hood in west-Amsterdam where the creative start-ups are popping up like mushrooms, and yet it’s mostly known to be one of Amsterdam’s depressed districts.

BoLo has an unfortunate high rate of youth crimes; around eighty percent of its 31.000 residents are (mostly Moroccan) immigrants and their offspring’s. Initiatives like BoLo Boost organize activities for and by local residents and aim to make the neighborhood a more pleasant place to live, play and shop. The foundation of Bos en Lommer date back to 1900, when it used to be all meadow and grassland, its name was derived from a farmhouse located in that area. The newly paved streets in this green district were named after family members of Willem de Zwijger (better known as Willem van Oranje, the father of the Netherlands) and after Dutch sea heroes. Today the neighborhood is an eclectic mix of old and modern. 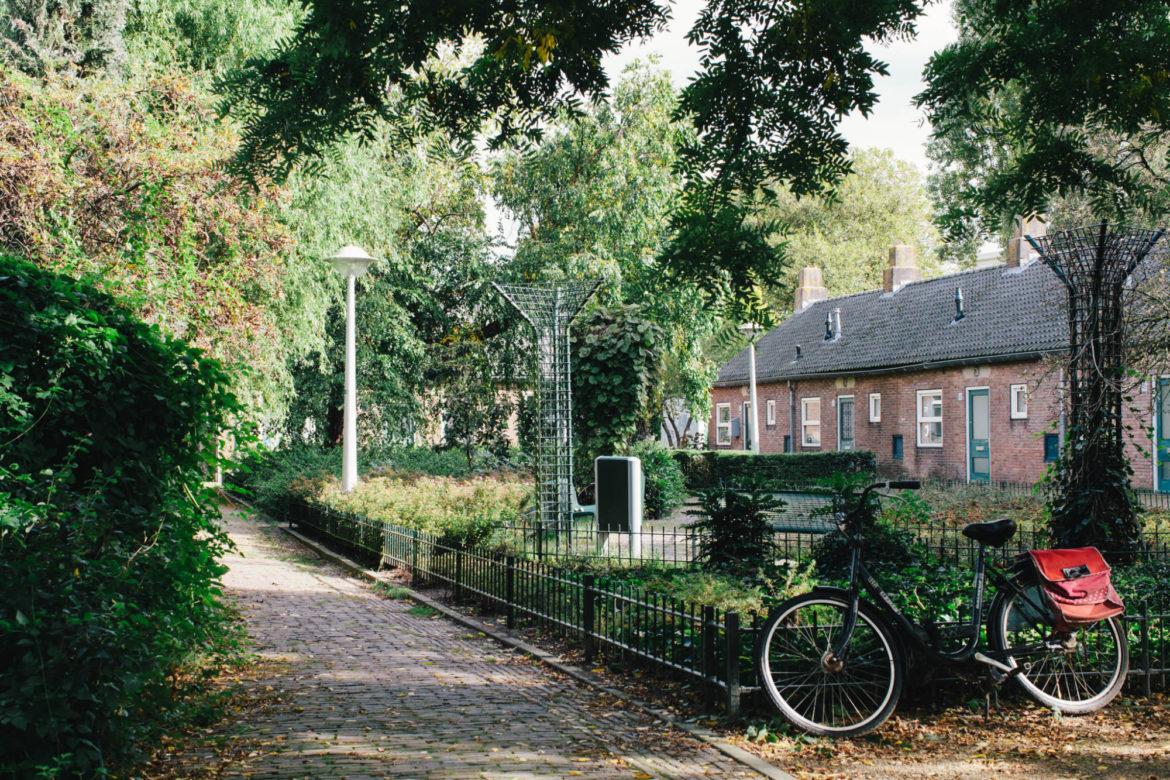 Longtime local Henk van Heezick (77) welcomed us and the awesome photographers of 'on a hazy morning' at his cosy cluttered nostalgic home. Henk is the ‘Gaskoning’ (Gas king) of Amsterdam and has been selling gas heaters for the vast majority of his life. His girlfriend Mathilde lives a few doors down the street. She is by far Amsterdam’s most fashionable and characteristic senior. They met five years ago when Mathild had locked herself out of her house and walked into Henk’s shop for help, the rest is history. 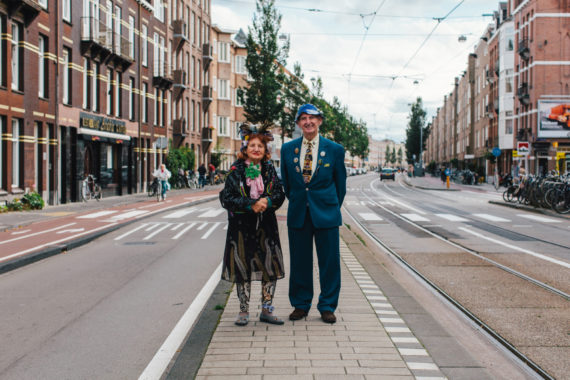 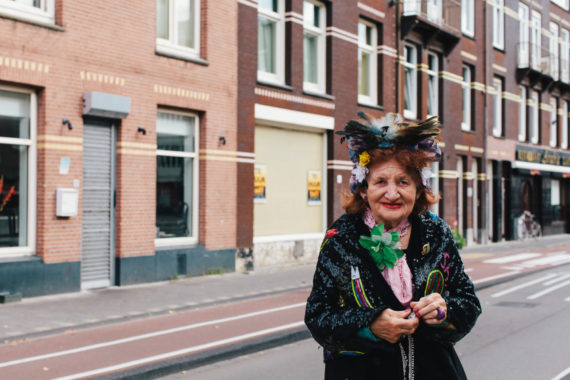 Hello Mr. van Heezick, we’re honored to visit your lovely home. How did you end up living here in BoLo?

Well, I was born in the Rivierenbuurt in Amsterdam-south. My father had a coal-shop there, he was a member of a community for coal farmers. At that time people working in a certain discipline who delivered goods were called farmers, you had the milk farmer, bread farmer, and so on. Shortly after WWII – I was born in 1937 – there was a lot of poverty and great housing shortage.

It was difficult getting accommodation at that time; a lot of families lived in small attics that were rented out by people who could use some extra money. The housing corporation started building extra houses in Bos en Lommer and renting them out for a decent price. The ground floor corners of the apartment buildings offered room for shops. We were able to get a house here and run a store so we moved here when I was still a young lad. Eventually I got married, raised three children and lived behind the shop I owned. I’ve never left the neighborhood.

Mathilde: "I’ve lived here all my life, I moved around a bit through Amsterdam-west but I was born here." 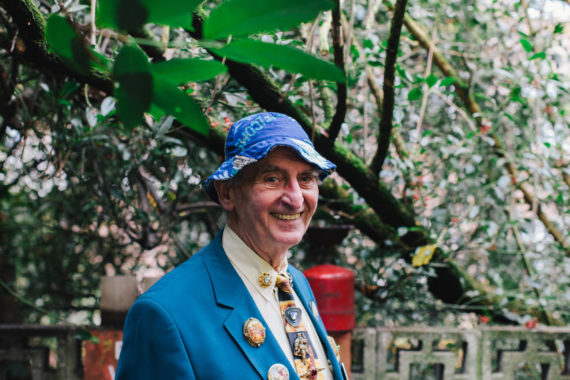 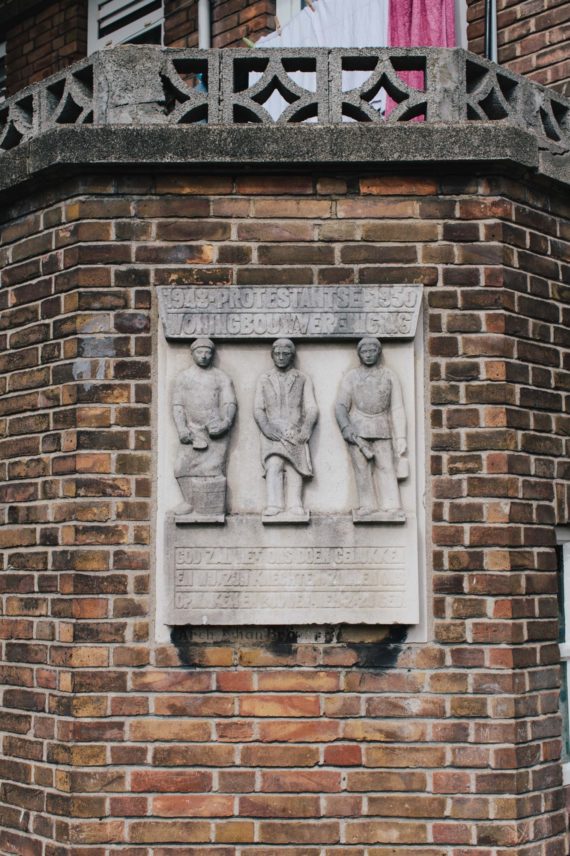 How would you describe Bos en Lommer to our readers?

Basically you could call Bos en Lommer ‘new Casablanca’, I mean immigrants are very hard workers, there are criminals among immigrants as well as native Dutch people but the youth here are really a menace. It’s difficult to address them to their bad behavior because they don’t take accountability for their actions. I can have friendly chats with anyone on the street but the third generation immigrants are not friendly. The girls are nice, I have faith in them, but the boys are not and I don’t know how I could change that. 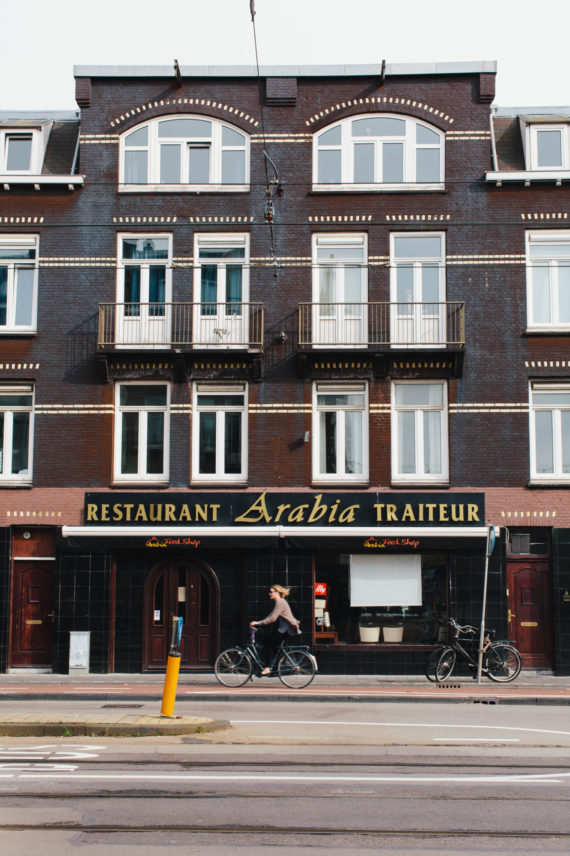 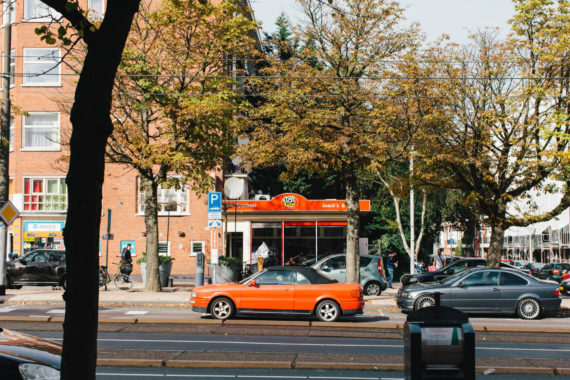 It’s also hard to get in contact with the women, as soon as I want to sit on a bench next to a Moroccan or Turkish woman they just flee. I’ve only had contact with them through business-interest but other than that it’s difficult to be in touch with the people here. 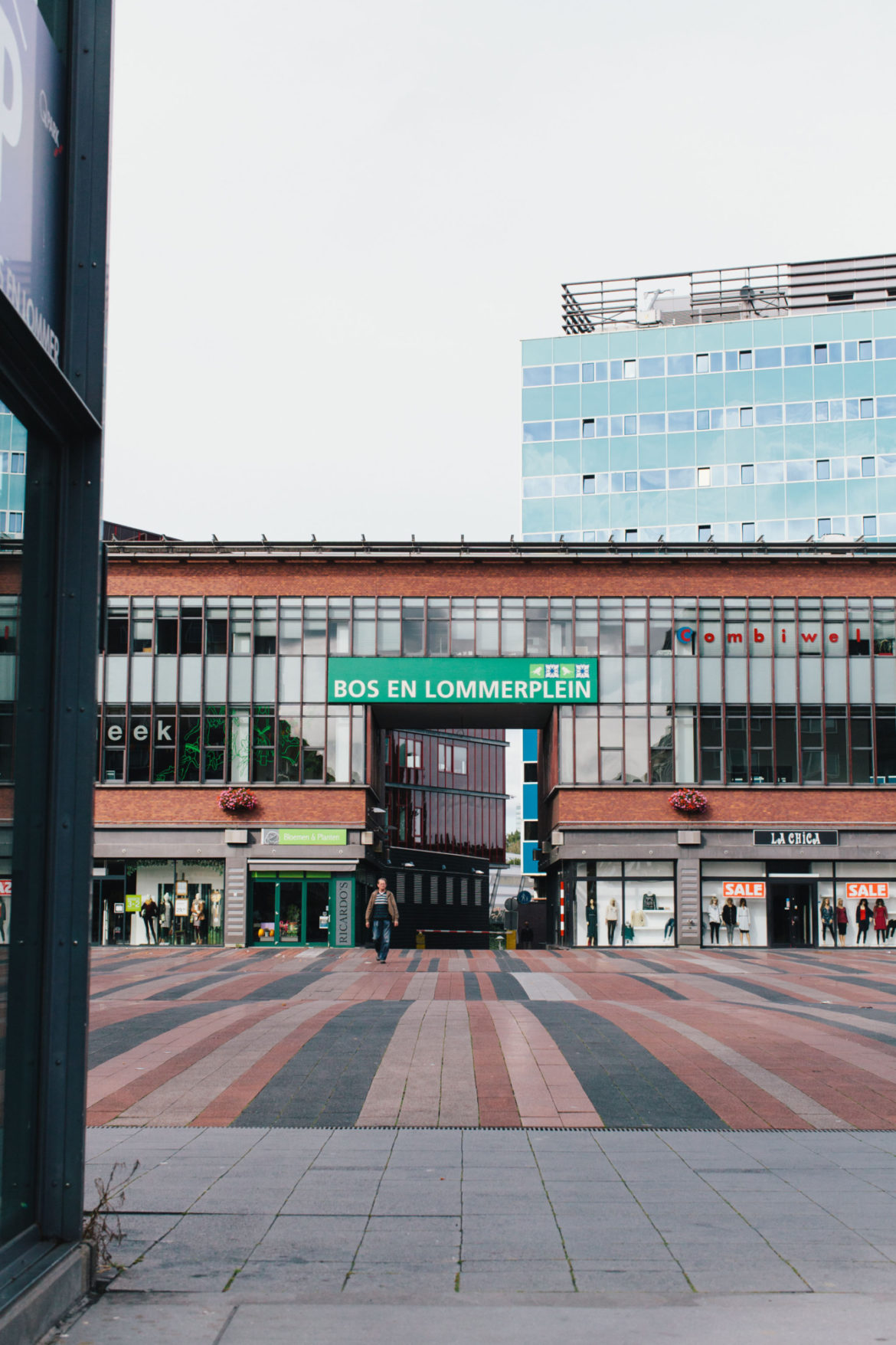 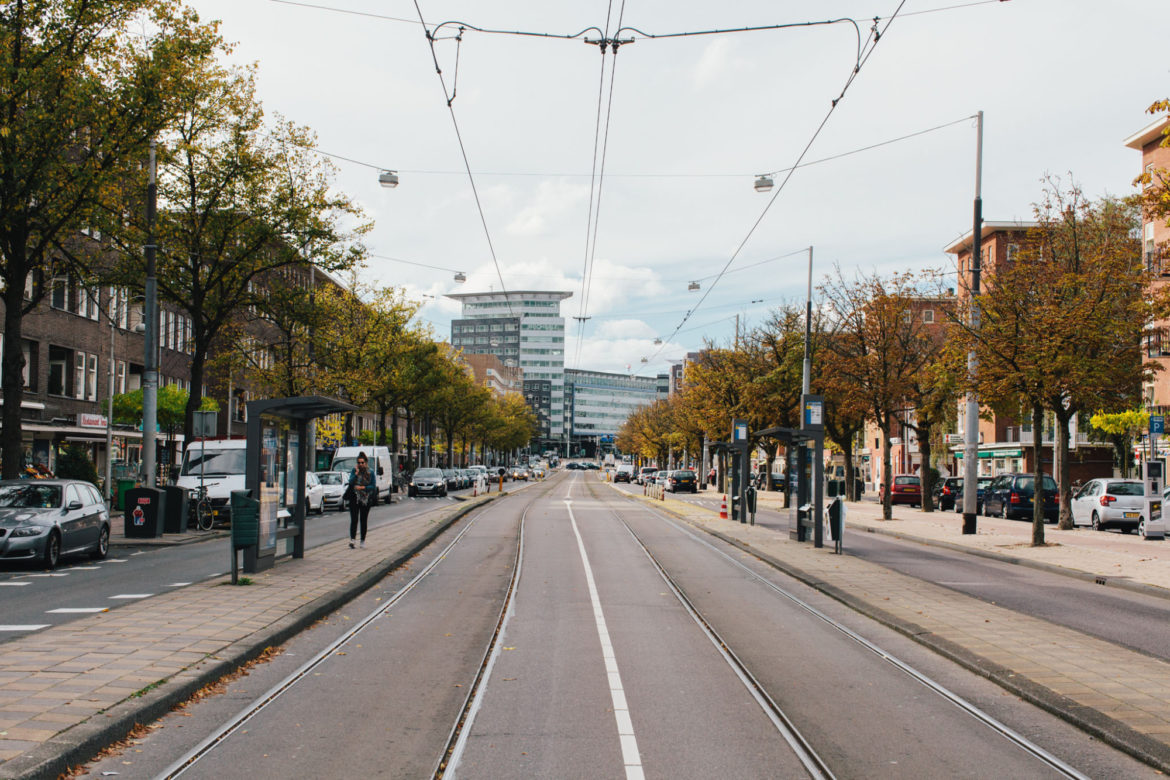 You have been living here for such a long time, how have you seen the neighbourhood change?

Very rigorously. Long time ago the church across my house was at the heart of the social activities here, they did a lot of charity work. It was always crowded in front of the church on Sundays. The Catholics were supposed to be the bearers of good news but I think they didn’t get it; they were much too strict. The church was supposed to care for the youth but they weren’t able to shelter the immigrant youth, the gap was too big. I’ve seen the first immigrants arrive here in the 50’s, first it were the Spaniards and Italians.

These people had a different culture and temper so we had to get used to them, but most of them already left after two or three years. But then came the wave of Moroccan immigrants. The Netherlands had a treaty with Morocco which allowed the immigrants to bring over their families. They had a lot of children and soon dominated the neighbourhood.

They barely spoke Dutch and they were rather timid people. A lot of the Dutch people that used to live here voted for this crook Jan Maat, back in the 80’s and also for Pim Fortuyn, but eventually these people moved to places like Almere, and Lelystad, that’s why the PVV is so big there, they all came from this part of Amsterdam Mathilde: The people of my age either passed away or are in a retirement home, I miss them. It has gotten very boring. 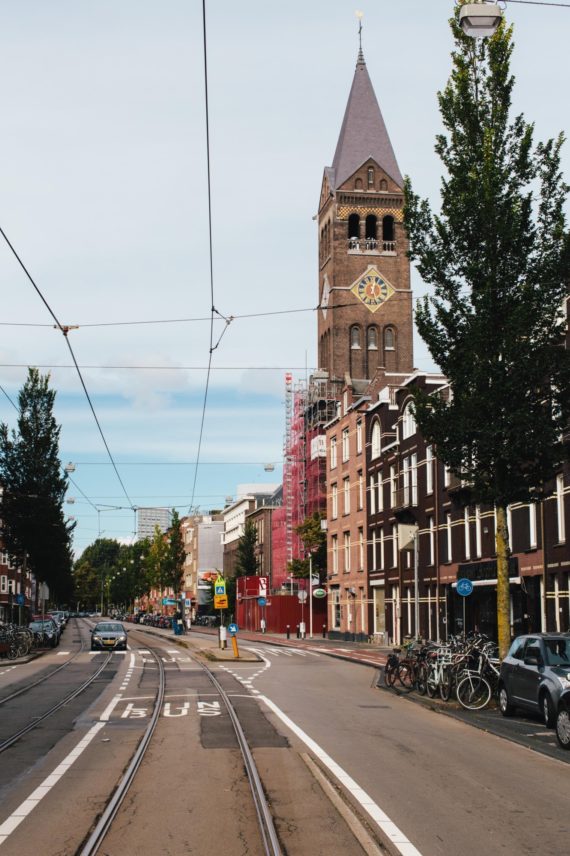 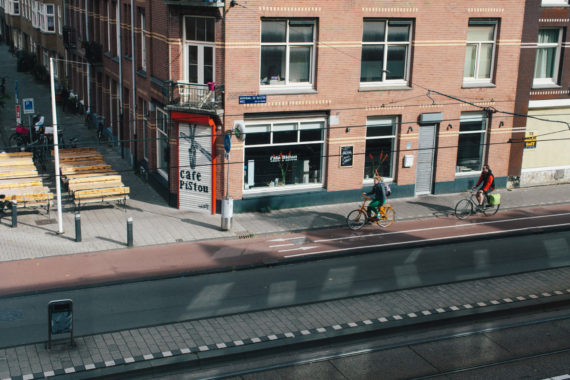 How have you been involved in your neighborhood?

I’ve been very much involved with local politics and was a member of the VVD and I was also a member of the community work center, it wasn’t the best time of my life; politics isn’t fun and it’s very complicated. I’ve prevented this street from becoming the ‘new Rokin’ where you wouldn’t be able to park your car. We, the shopkeepers and the bar owners joined hands, we put some money together and even pressed our own local newspaper. But I don’t have that much affinity with this district anymore. The days of being and feeling involved are long over. 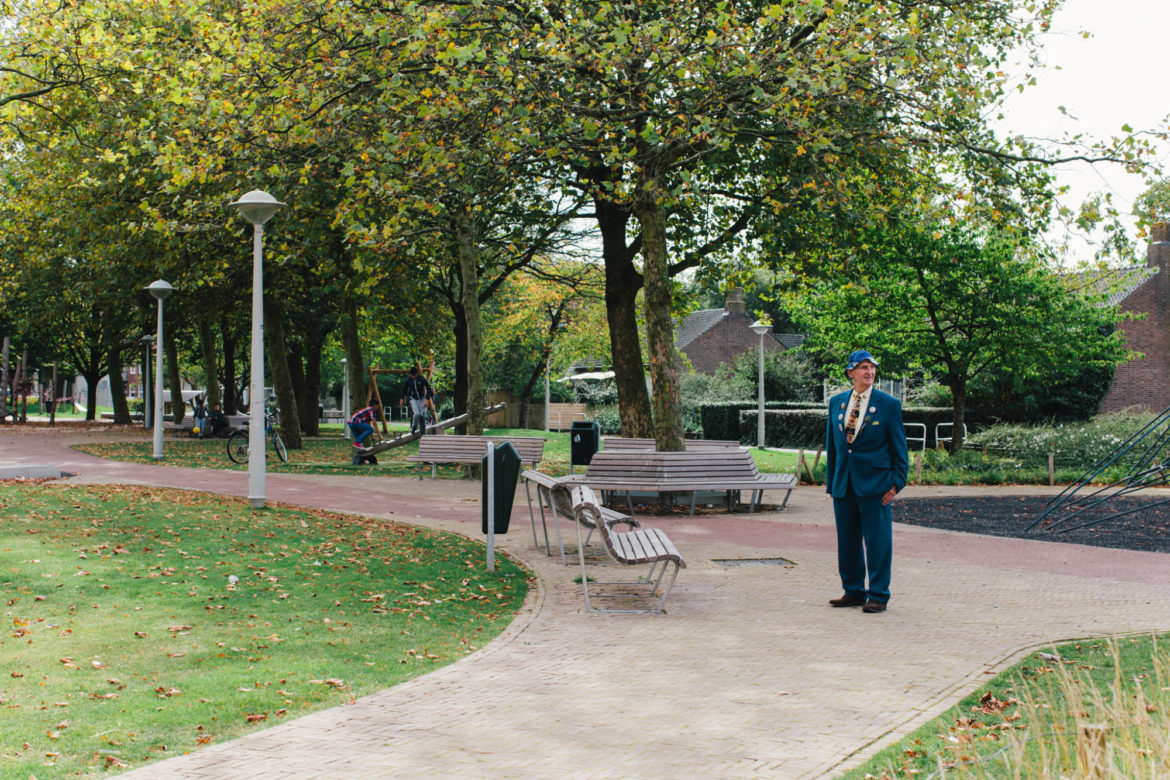 What do you do to keep yourself busy here?

There used to be a tram here that would take you to the beach to Zandvoort, I used to do that with my wife who past away nine years ago. The tram was a massive thing and very long, the breaks didn't work too well; it went under the name the 'murderer'. These days I make my round of walks in the neighborhood and sometimes we grab a coffee and a sandwich at the Pitstop, but Mathilde and I usually head towards the center; to van Baerlestraat or Nieuwmarkt. Mathilde gets a lot of attention; people always want to get on the picture with her. She fills my days. And sometimes we drive to the beach with my Fiat. I’m also a part-time chauffeur, I sometimes drive buses, trucks, and private cars to the other side of the country and take the train back; I call it paid scouring.

Mathilde: "There’s not much to do here, I find it boring, I always take the tram to the center, I have a lot of friends there. I used to be married with a goal keeper from Ajax Eddy Pieters Graafland and know a lot of celebrities and boutique keepers." 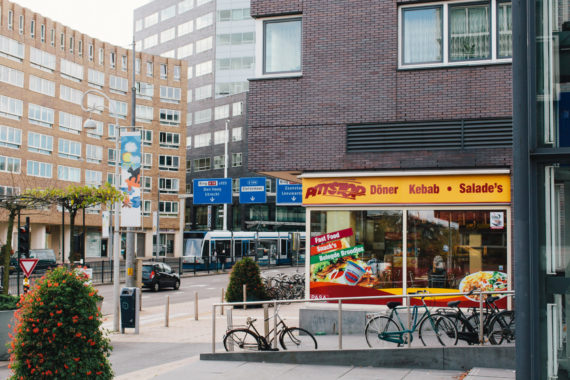 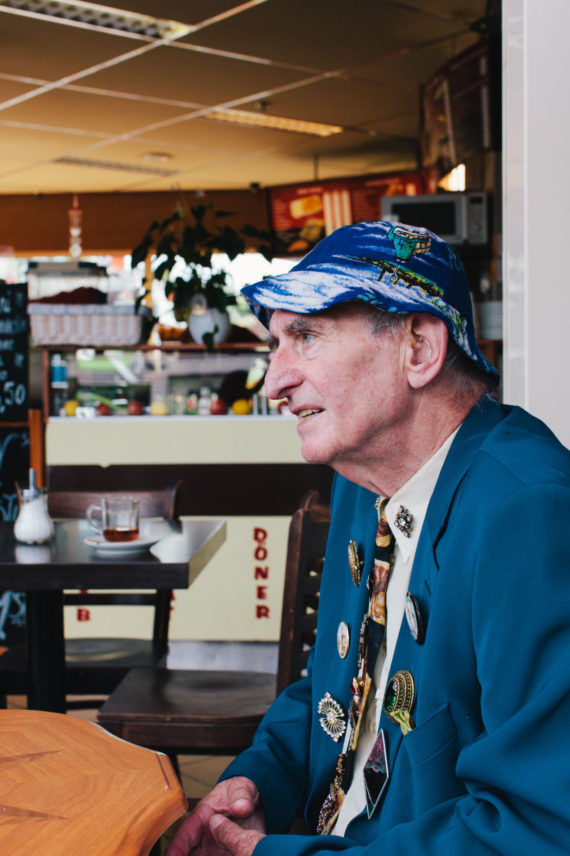 Last month we visited Amsterdamse-Poort for our Town Talk, what's your image of that hood?

Very colorful, a lot of Surinamese people. The Buildings look like aquariums, the office buildings are all made from glass and concrete. It's very massive. There used to be some shootings there, I don’t feel very comfortable hanging around there. Thank you, Henk and Mathilde for giving us a glimpse of your BoLo. And another round of applause for 'on a hazy morning' for photographing the neighborhood. Follow them on Instagram @onahazymorning for more beautiful city snaps or visit their website onahazymorning.com . 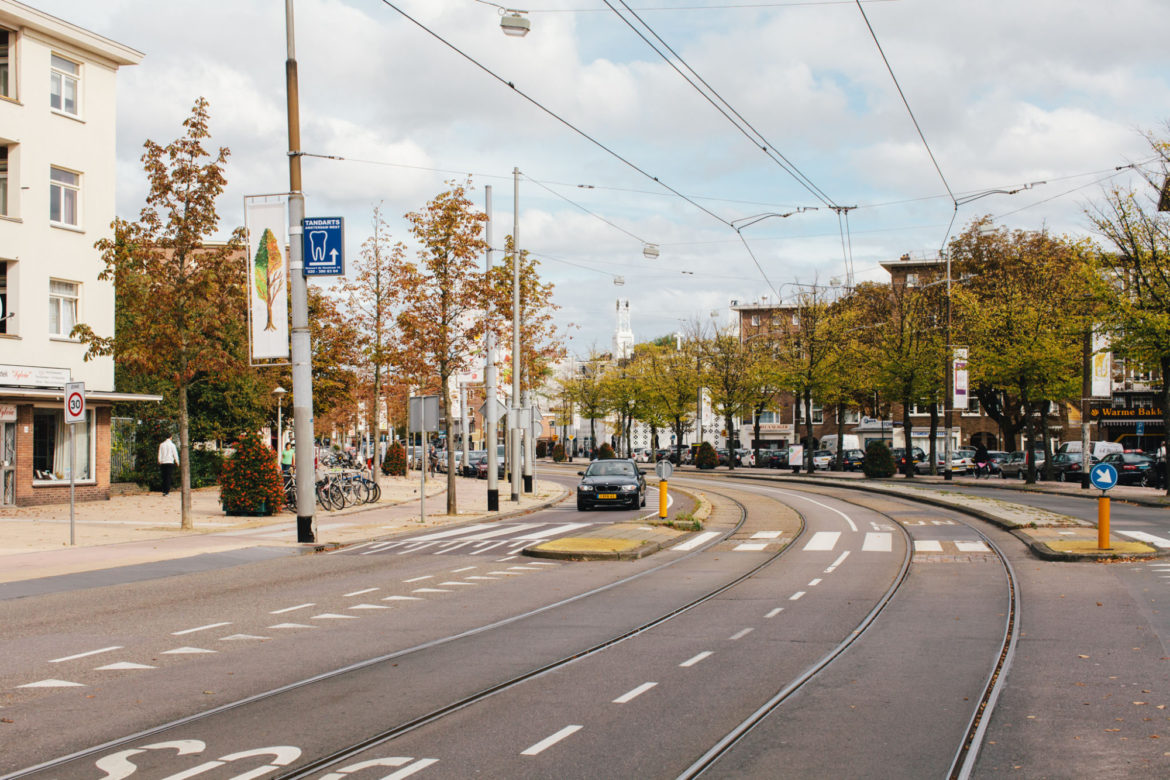