The tram, twisted and tangled

The city center of Amsterdam is often compared to a cozy, but very full living room: jam-packed with (old and monumental) furniture and vast amounts of visitors. Now imagine getting yourself around in this city fit to burst… Let’s consider the options.

Transporting oneself Firstly, the worlds oldest transportation system; walking. Walking, how wholesome and hearty it may be, does not have a very attractive time-distance ratio in a big city. A second and more comfortable option would be a car. Fortunately, Amsterdam has made it fairly impossible for its inhabitants to affordably own a car and drive it around. No, in Amsterdam, transporting oneself mainly depends on our eternal love for the bicycle… until it rains, or when it gets stolen (again). 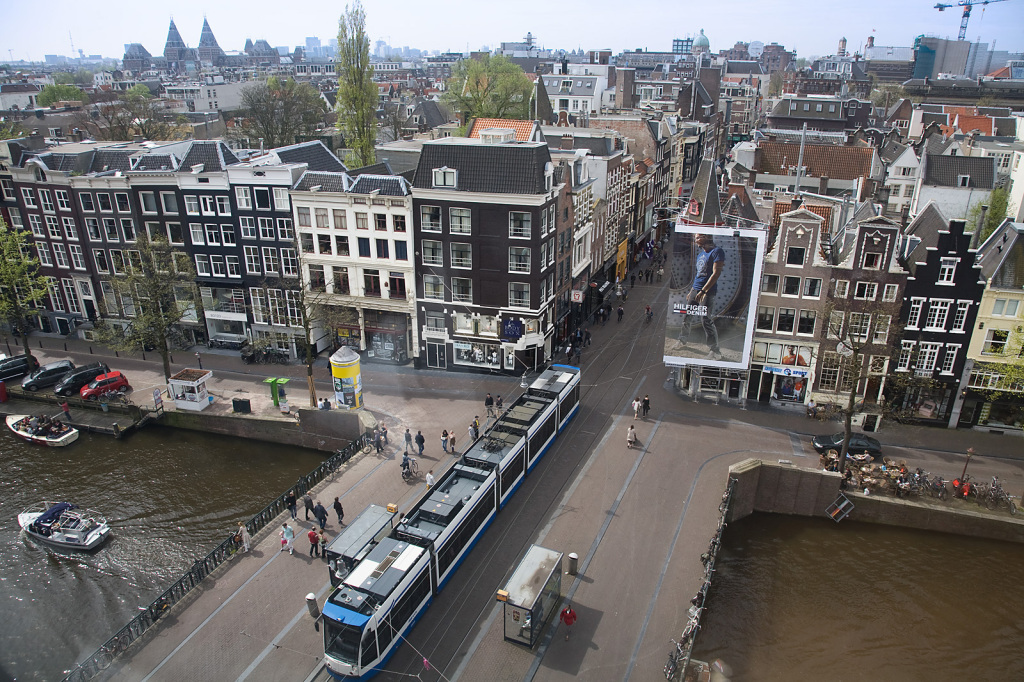 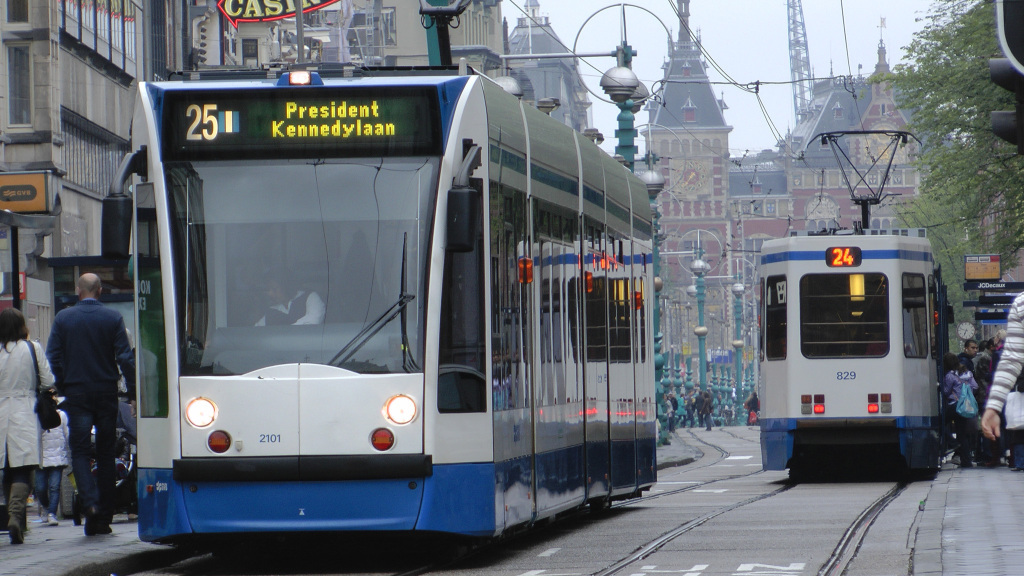 Taking the tram. This brings us the public transport system. Discarding the smelly, hot and tardy bus system of our capital, we single out the oldest organized transport grid of our city. The one and only, the reliable and characteristic, tram network of Amsterdam. 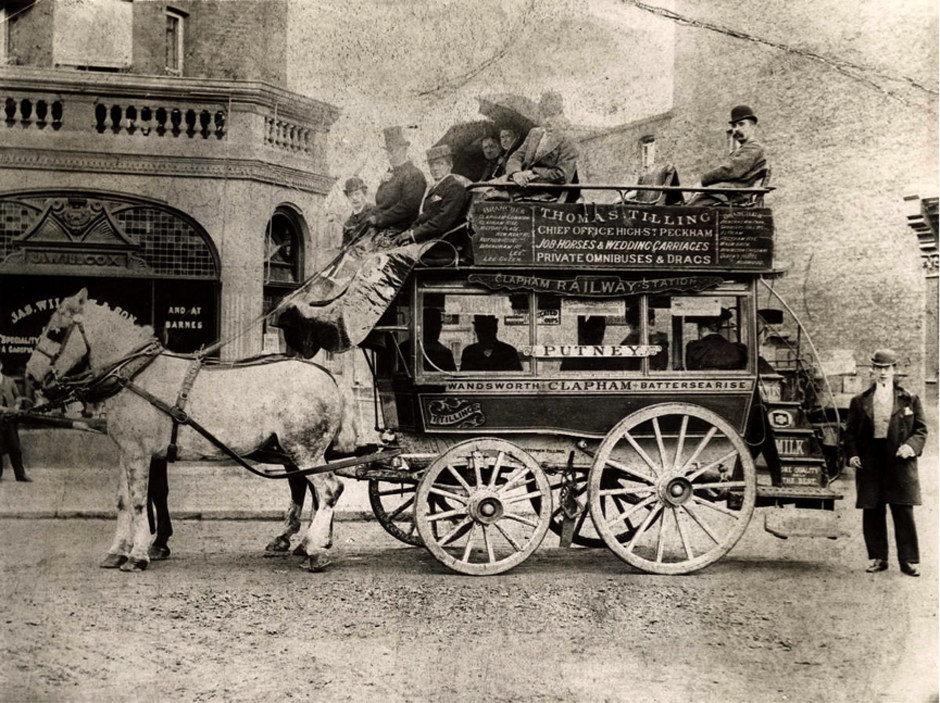 To give you an idea of what to expect when talking about an omnibus. Back in time. Going back in time, to 19th century Amsterdam, the first trams were a welcome innovation. Public transport at the time merely consisted of the omnibus, a horse and carriage, hobbling through the city center on fixed times and routes. Unfortunately, for the 19th century Amsterdammer, the air tire did not yet exist, so a ride with the omnibus must have been imaginably uncomfortable on the Dutch cobblestone streets. To comfort this discomfort the first tramline appeared in 1875 which has defined the Amsterdam townscape ever since. The first trams were, in absence of electricity, horse-powered rail vehicles . However scenic this may sound, the endless heaps of manure on the city streets led to much needed technical innovation: the electric trams. The crisscross of tram rails started to spread through the city. Starting with the first line, from Leidseplein to the Plantage (line 1, which still runs today!), and growing simultaneously with the city itself. 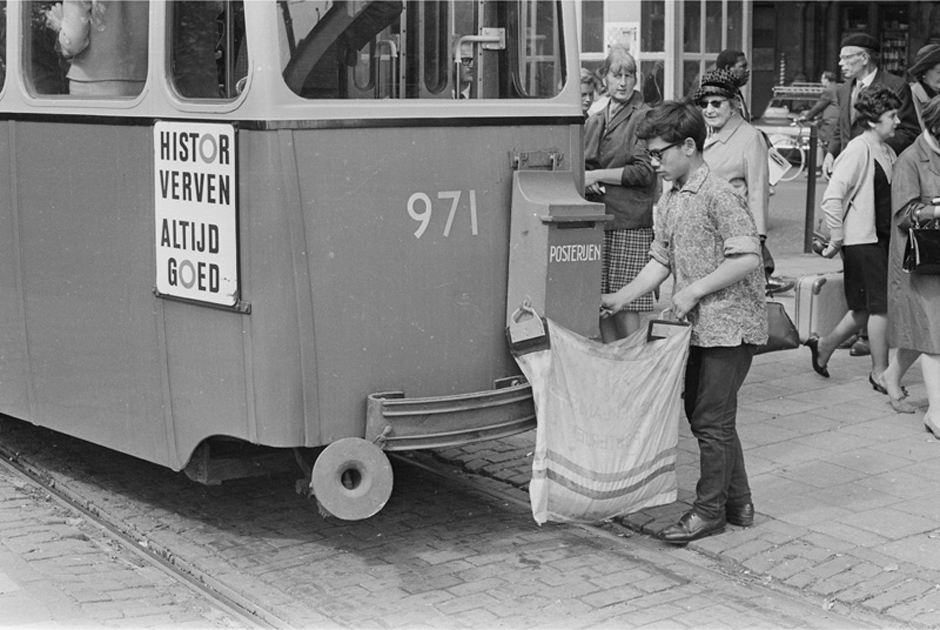 Trams used to have mailboxes attached. 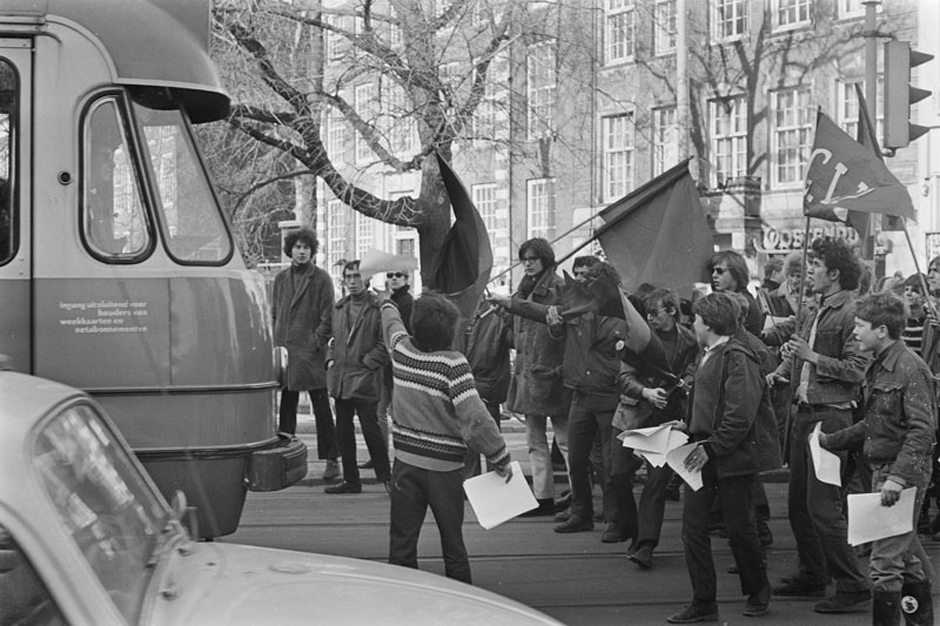 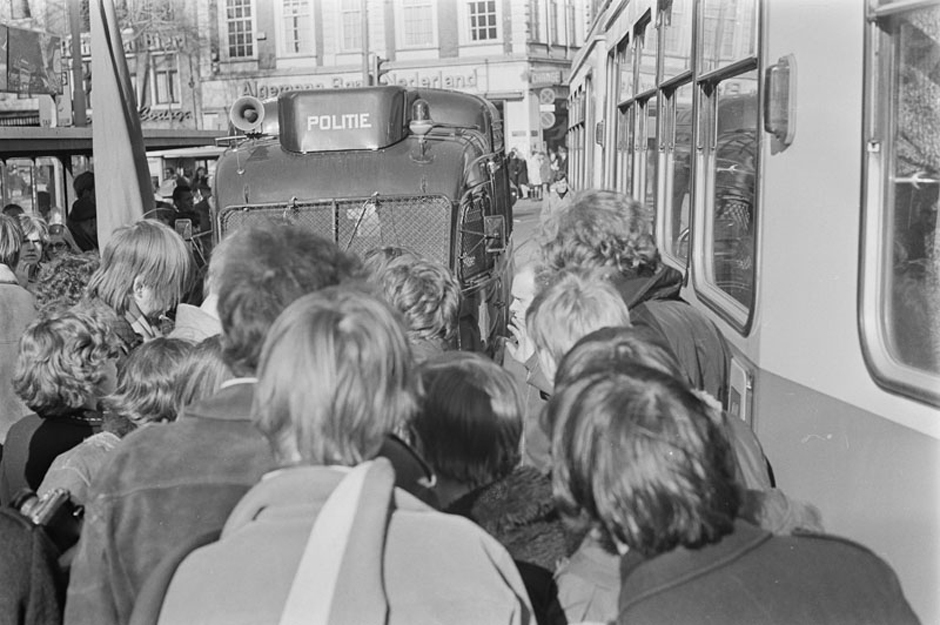 A protest in Amsterdam against the high fares for tram travelling (1969). Anno 2014. Today, the annoying but life-saving sound of the Amsterdam tram is unmistakable. Countless foreigners and new-to-Amsterdam-Dutchies (including myself a long time ago) are completely baffled by the complexity of the tangled tram routes and especially the unsaid tram rules: checking in and out with the same ticket (OV chip card), which buttons to push (push the green button at the exit! or one finds oneself three tram-stops further) and of course the strict difference between the exit and entrance doors. 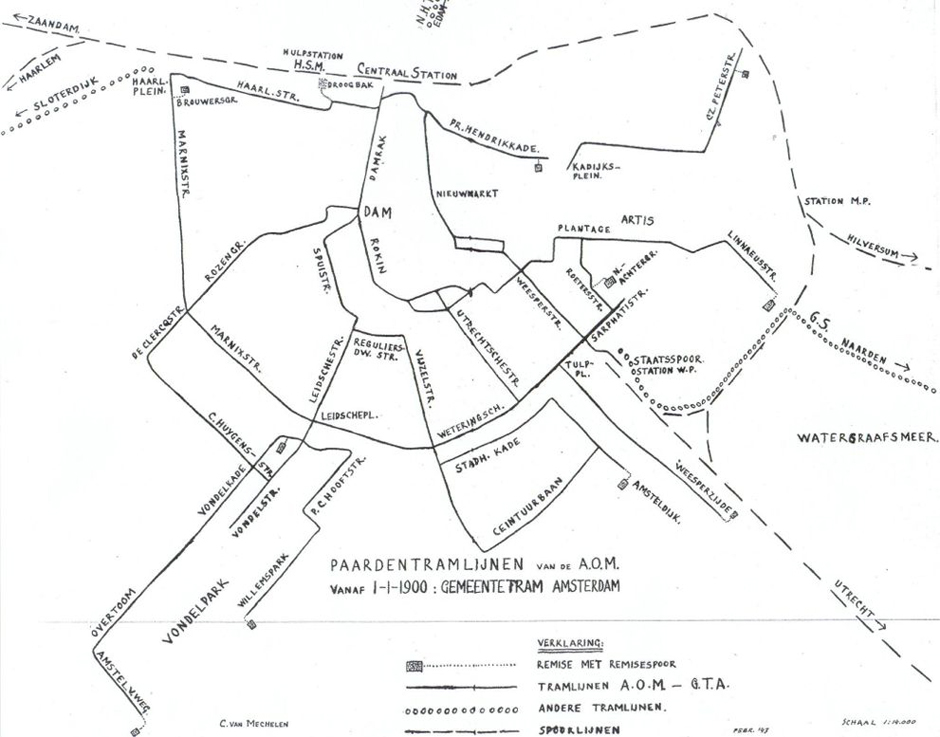 This drawing documents the tram system around 1900, which is remarkably similar to the tram network nowadays, a century later. 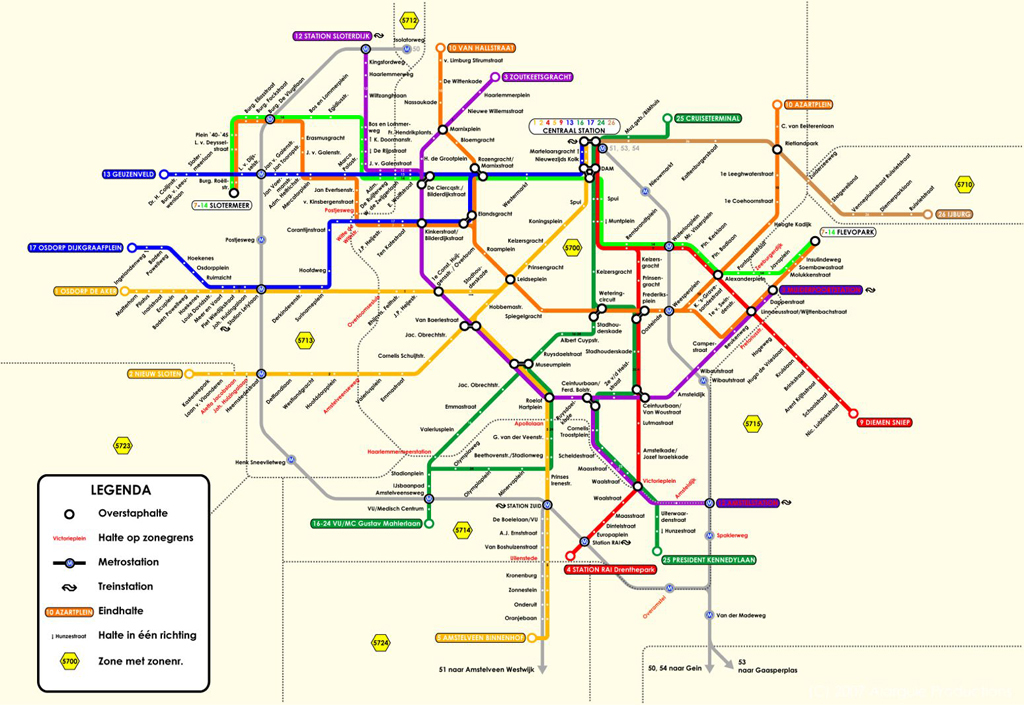 When finally in the right tram (in the correct direction), enjoy the sleeping conductor in their seat or the gibbering girls ready to go out. Always stand up for the elderly and NEVER stand in the entrance if not necessary. Feeling reminiscent and melancholic in the fast-going chaotic trams of today? Than visit the iconic trams on the NDSM werf, nowadays used for everything but transportation. Or hop on the historical tram that goes once a week, which takes you from het Haarlemmermeerstation, through het Amsterdamse bos, and all the way to the small village Bovenkerk. 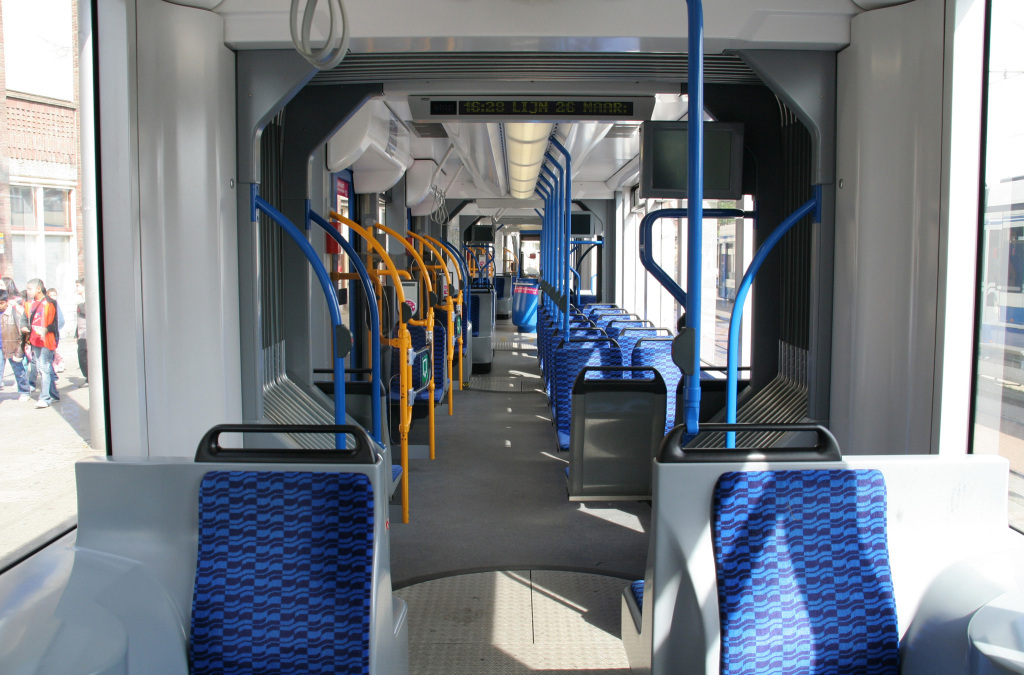 The interior of a modern day Amsterdam tram. In summary, the most interesting tram-facts: - Line 1 is the oldest and still existing tram connection, from Leidseplein to the Plantage in Amsterdam East. - Line 2 is, according to National Geographic Traveler, 9th place in the top 10 of most scenic tramlines worldwide. - Line 8 existed from 1905 till 1942 and travelled through the Jewish neighbourhood. This line number is no longer in use because of the importance this line had during the Second World War. - The low angle and high windows make a tram ride the perfect way to view the Amsterdam facades. - In the sixties there was a huge shortage of tram personal. Consequential the frequency of the trams was reduced, except on predicted rainy days. 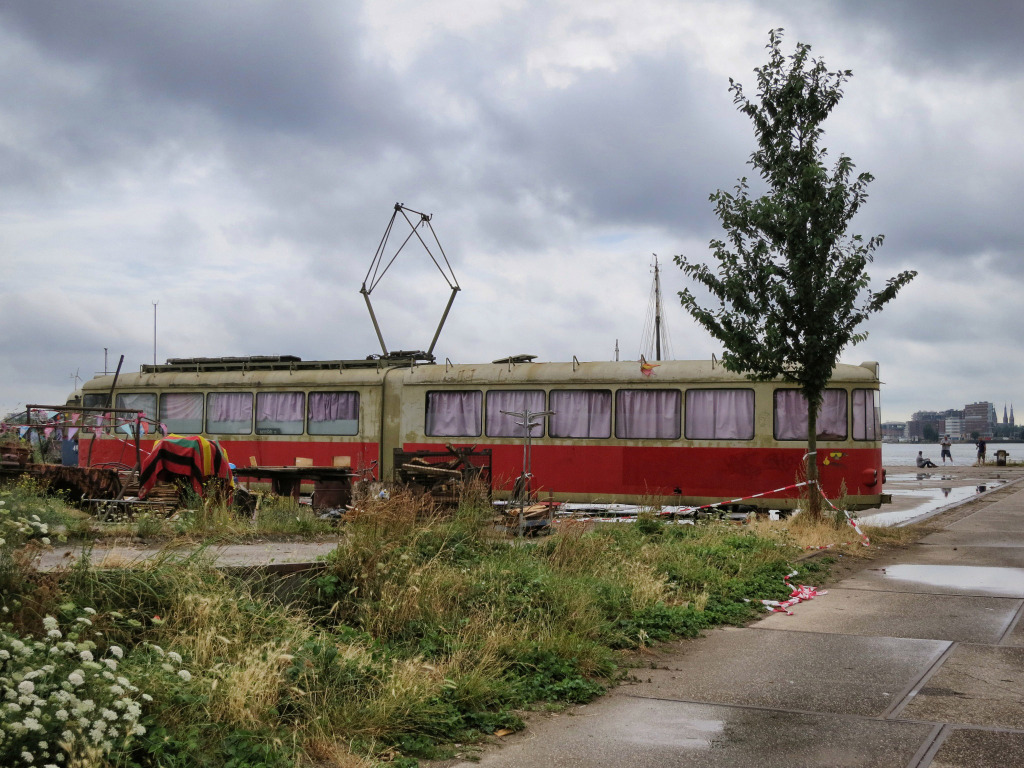